Your vacation guide to Tenerife in the Canary Islands

Articles
Lori Zaino is a writer for TPG and TPG UK covering travel, news, points and miles and more. She's been based in Madrid, Spain almost 15 years and is an expert in travel throughout destinations such as Europe, Southeast Asia and Africa.
Follow
June 09, 2022
•
10 min read 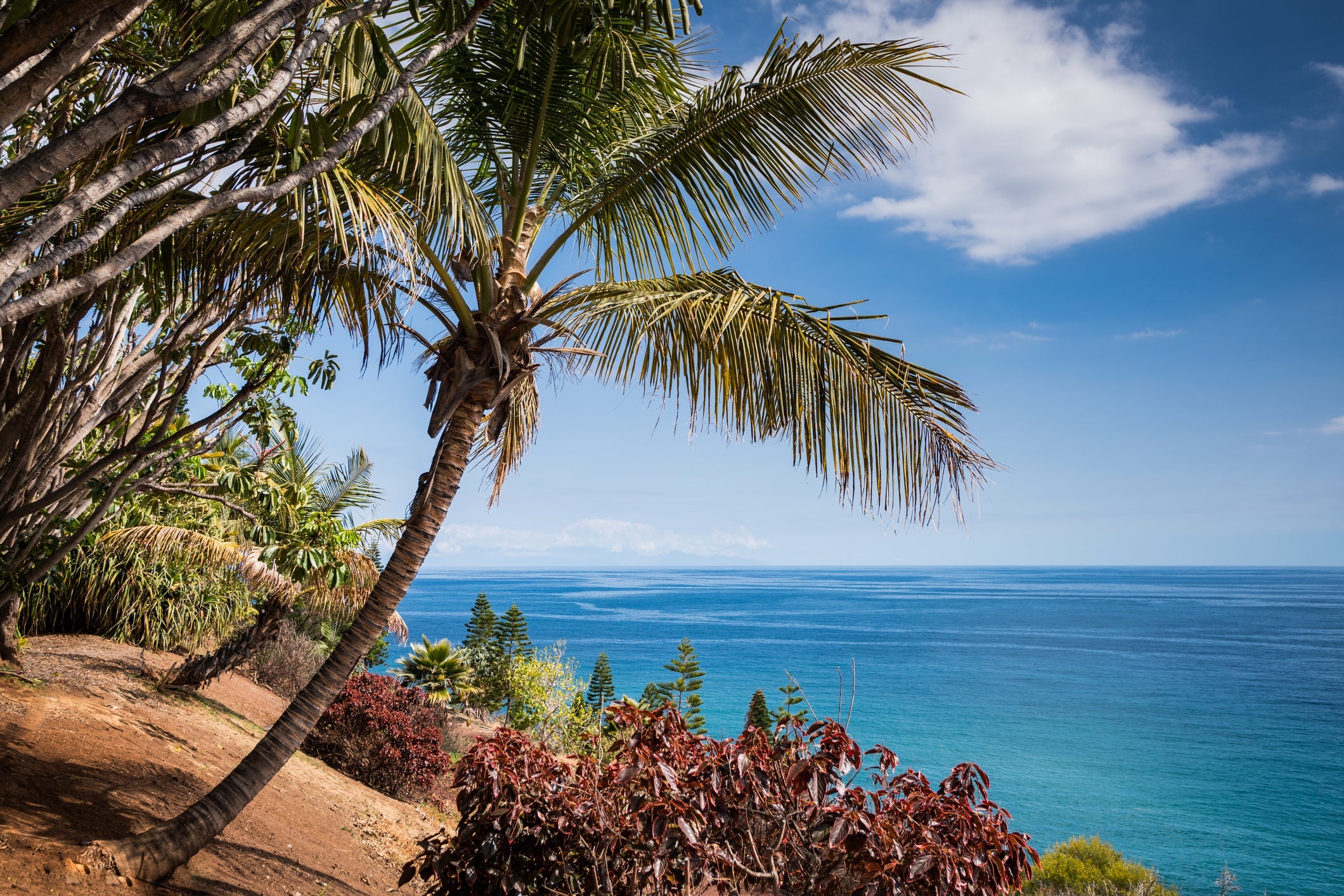 The largest and most populous of all the Canary Islands, Tenerife has no shortage of beautiful beaches, charming villages, epic hiking spots and family-friendly activities.

And if you think it's simply too far-flung and getting there would take forever, United's new service starting Thursday, June 9, 2022, is changing that with a brand-new nonstop flight between Newark (EWR) and Tenerife South (TFS).

Anytime is a good time to visit Tenerife, thanks to year-round sunshine, warm temperatures and no rainy season. Whether you’re hoping to wine taste and explore on your honeymoon, visit water parks and hike volcanoes with your family or simply have a getaway filled with sunshine and cocktails with friends, Tenerife is the island for you.

This guide will help you curate your trip in full, from tips on getting there and where to stay to advice on what to do, see and eat during your Canary Islands vacation.

Not quite sure if Tenerife is the right island for your visit? Check out these guides, which may help you choose another island more apt for your vacation:

Getting there and around the Canary Islands

Tenerife is home to not one but two international airports. There’s Tenerife Norte (TFN) and Tenerife Sur (TFS). As each of their names suggests, Norte is in the north of the island in the capital of Santa Cruz. The Sur airport is near the southern tip of the island, closer to popular resort areas such as Los Cristianos, Playa de las Americas and the Costa Adeje.

This is the easiest and fastest way to reach Tenerife, which is closer to Africa than Europe. Or, you can always take advantage of Iberia's award chart sweet spots, flying business class starting at 34,000 Avios one-way from a U.S. hub like Chicago (ORD) or New York (JFK) to Madrid, then hop over to Tenerife North (TFN) or Tenerife South (TFS), a flight that takes two-and-a-half to three hours.

You can also combine a visit to Tenerife with another European hub, as many flights operate on both full-fare and low-cost carriers from destinations like Frankfurt, London, Paris, Milan and Amsterdam, among many others. Most visitors coming from European destinations tend to fly into the south airport, which caters more to tourists. However, if you get an amazing deal for the north airport and plan to rent a car, it’s about a one-hour drive to some of the more popular resort areas in the south.

Renting a car is essential if you’d like to explore. Public transport on Tenerife is limited to buses that often run on 'island time,' especially on weekends and holidays. Popular car rental companies like Hertz and Avis have a presence at both airports. However, local car rental chains like Plus Car and Orlando tend to be more affordable.

That being said, if you’d prefer to permanently park yourself in a beach lounger at your all-inclusive hotel, you may not need to rent a car. Instead, take a taxi from either airport to your hotel, as there are no ride-hailing programs on the island.

In general, most visitors prefer staying in the south, mainly because the weather is often sunnier and less windy in this area of the island. The west side is also popular for travelers. Looking for all the tourist amenities? Consider areas like Los Cristianos, Playa de las Americas, Los Gigantes and the surrounding Costa Adeje.

If you’re looking to explore Tenerife’s wineries, tour the capital of Santa Cruz or hike in Anaga Park, you could consider a base in the north of the island.

Most of the resorts are located in the south and west of the island. For a more local stay, book a home or apartment in the north of the island. Santa Cruz provides all the amenities of an urban oasis, while San Cristóbal de La Laguna, a UNESCO World Heritage site, has colorful, vibrant homes reminiscent of the Caribbean and a gorgeous cathedral.

Wine-lovers should consider the rolling hills of Icod de los Vinos. There are rentals in the sunnier south in quieter, less touristy areas such as Las Galletas or surfer enclave El Médano.

For a base in the north, the AC Tenerife, which opened in 2021, is an affordable, basic option for Marriott fans (rates start at 25,000 points per night, but it's better to pay cash as rates usually cost well under $100 per night). The hotel features a small rooftop pool and offers a fairly ample breakfast buffet spread, too.

Another beachfront option is the Hard Rock Tenerife, which boasts a trio of swimming pools and the Rock Spa. The H10 hotel brand has a few hotels throughout the island apt for both families and couples such as the H10 Big Sur and the H10 Costa Adeje.

What to do and see

What’s the top activity to do in Tenerife? The beach! The island is covered with both black sand volcanic beaches, as well as stretches of golden sand. Here are some of the best:

Tenerife is perfect for travelers who love adventure. Besides offering all sorts of water sports like diving and snorkeling, kite, wind and regular surfing, paragliding is a popular activity, as is canyoning on Tejina Mountain. You can also explore an ancient lava dome system of craters and caves at Cueva del Viento.

Hiking is another favorite activity in Tenerife. The most famous spot is one of the tallest peaks in Spain, the Teide volcano. There are many paths of varying lengths and difficulties to choose from. For those wanting a more relaxed experience, there’s a cable car that takes you almost to the very top.

Note that a trip to the top summit requires a permit, and it’s best to buy your cable car tickets well in advance for the beginning of your trip. Make sure to check the day of to confirm the cable car is operating (it often shuts down due to weather conditions), rebooking for later in your trip if it’s not.

Anaga Rural Park is a verdant area to hike. It leads you through twists and turns in varying microclimates past one-of-a-kind mosses and laurel trees, fertile valleys and rocky passes, offering stunning views of the ocean below. Wear layers here — while others may be sunning on the beach, it can be freezing and rainy in areas of this natural park.

Masca is one of Tenerife’s most beautiful mountaintop villages. Hike the area, or simply drive through the Macizo de Teno mountains and enjoy the impressive scenery. Certain hikes here offer views of Los Gigantes, towering oceanside cliffs on the island’s western side.

Families will enjoy visiting the Siam Water Park, one of Europe's largest waterparks. Families with older children may also enjoy quad adventures or stargazing experiences. Santa Cruz, the island’s capital, is home to the Natural History Museum. The city also features many 15th-century buildings and palm-tree-lined squares ideal for a stroll on a warm, sunny afternoon.

What to eat and drink

Make sure to dine in some of the most traditional restaurants found in the north of the island, known as guanchinches. These no-frills eateries aren't fancy, featuring simple foods with a limited menu. However, they're the heart and soul of the island's gastronomy.

Traditionally, these restaurants also cultivate their own wine, so make sure to indulge in a glass (or a few). Some of the best ones to try are the colorful Restaurante Bodegón Casa Tomás, famous for its ribs in mojo picón sauce, or Guachinche 3 Dragos (try the fresh cheese or stewed octopus).

Tenerife’s volcanic soil is ideal for wine cultivation. Some of the best wineries are in the north of the island, like Bodegas Lomo or Bodegas Monje. The latter offers a gorgeous outdoor patio where you can taste wine while admiring the sunset.

Tenerife makes for a versatile vacation spot: One where you can either lounge on the beach for days on end, enjoy wine-tasting and waterparks, or explore caves, forests, beaches and beyond.

With mild temperatures and sunshine year-round, plus a new way to arrive nonstop, there’s never really a bad time to visit. There’s always plenty to do on this affordable island.