How to Book Lie-Flat Seats on Hawaiian Airlines for 40,000 Miles

Articles
Summer Hull , aka Mommy Points, ran the Mommy Points site for families who want to travel more for less using miles and points for seven years. She now heads up a variety of special projects at TPG when she isn't exploring the world with her own two girls.
Follow
June 05, 2019
•
10 min read 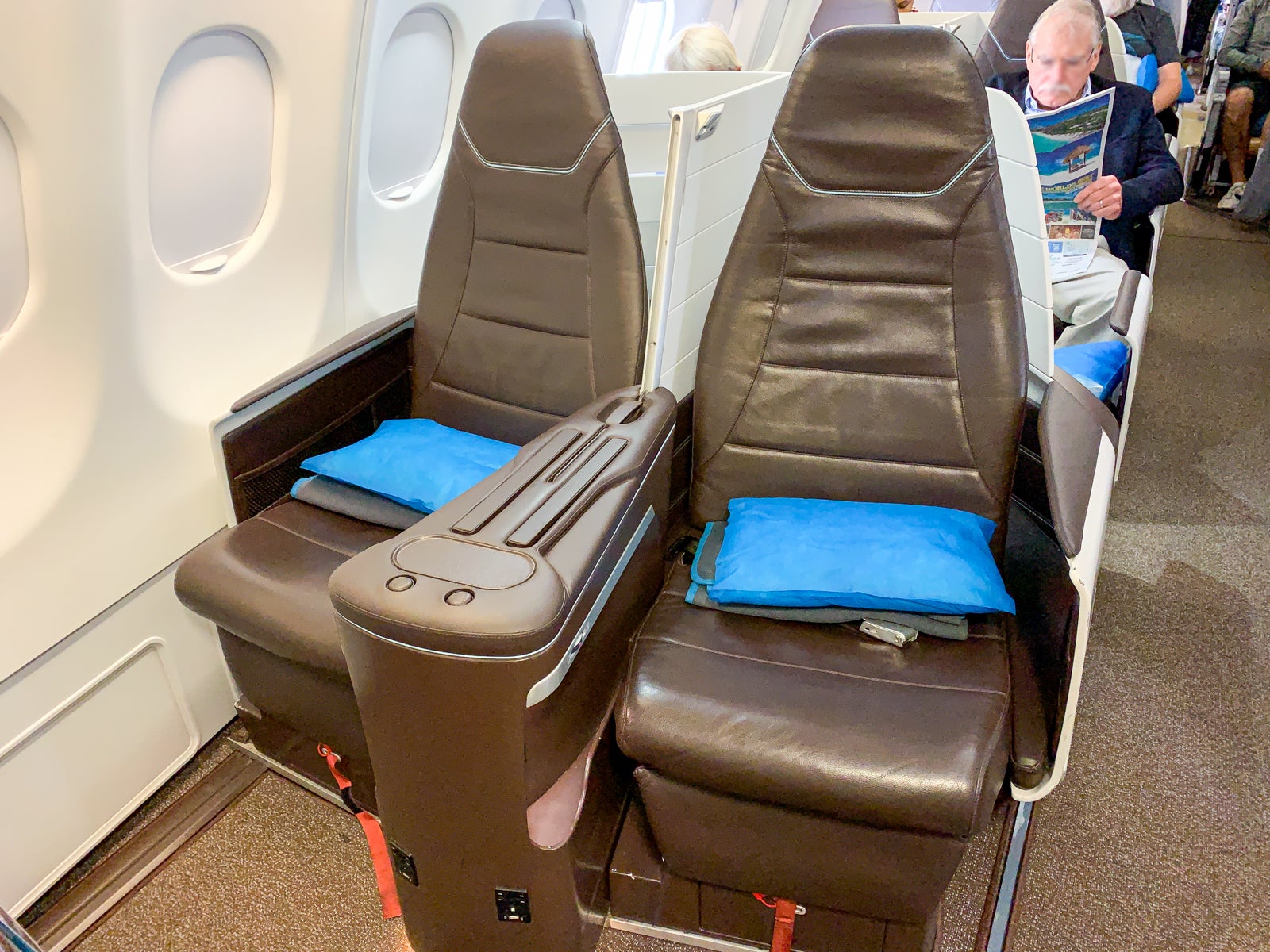 More than 9 million people visit Hawaii every year, and most of them need to catch a ride on a plane to get to paradise. From the fleet of Southwest 737s flying from the West Coast to Hawaiian Airlines A330s with lie-flat seats operating on the longest route in the United States from Boston to Honolulu, there are lots of choices -- and they aren't even close to all being equal.

While there's nothing wrong with hopping on the cheapest seat to Hawaii you can find (all the seats on the plane land in the Aloha State at roughly the same time), there's also nothing wrong with getting the best your miles can buy: a lie-flat seat upfront.

Specifically, let's zero in on flying in one of Hawaiian Airlines relatively new lie-flat seats found on its A330 aircraft. The timing for using your miles and points to get to paradise this way is perfect, as the Hawaiian Airlines World Elite Mastercard has a limited-time offer of 60,000 bonus miles after you spend $2,000 on the card in the first 90 days -- which as you'll see, is more than enough miles to sit in the good seats. (Read on for additional card perks, including a 50% off companion certificate.)

On Hawaiian Airlines, flights from the US mainland to Hawaii cost anywhere from 20,000 to 130,000 miles each way. Economy seats start at 20k miles, while first class starts at 40k and tops out at 130k. Taxes and fees are very minimal, at about $6 each way. Recently, Hawaiian introduced (without advance notice), a new award chart with more pricing levels than in the past. This also raised the floor on first-class awards to/from the mainland to 40,000 miles, up from 30,000.

Award price increases are never a good thing, but here's the truth: If you can book a 40,000-mile award flight to Hawaii in a lie-flat seat, you're still winning, as that is a much better deal than what most airlines offer. Here are my tips to do just that:

Look for flights on the right aircraft type. Hawaiian Airlines has a first class on all its flights from the mainland, but they don't yet all have lie-flat seats. When searching, you can pretty easily see the lie-flat designation. Or just take a look at the seat map. If you see this, you're good:

If you see this, on the other hand, there are not lie-flat seats, so keep looking if 180-degree recline is your jam.

According to Hawaiian, here are the routes where you may find Hawaiian's lie-flat seats on the A330:

That said, I've seen lie-flat seats other places, too, such as Phoenix - Honolulu, so do some of your own searching before giving up on the route of your choice.

West Coast Is the Best Coast

If you want to spend just 40,000 miles to get to Hawaii in a lie-flat seat, the West Coast is your best coast. Hawaiian Airlines operates from JFK and Boston, but finding a 40k first-class awards from those cities is a very tall order. (I'm not going to say it's impossible, but it's also not very likely in recent history.)

Your better bet for finding a saver first-class award is to look from cities such as San Diego, Los Angeles, Las Vegas and San Francisco. While my sample size wasn't huge, I found the best saver lie-flat seat availability from San Diego. This is also where you can sometimes find first-class tickets from about $600 each way, which is a key element we will circle back to soon.

(Do note that from the West Coast you get skimpier pillows, blankets and no amenity kits, but your seat still goes flat.)

The only way to find 40k lie-flat seat awards on Hawaiian Airlines to Hawaii is to search. However, generally speaking, I found the greatest likelihood of availability occurring in the few weeks leading up to departure or on a very random day many months in advance. Having some date flexibility (or extreme luck) is crucial to locking in one of these awards to Hawaii if you want to spend as few miles as possible.

Finding two seats is possible, but finding more than two takes extra luck. It can and does happen, but you are narrowing your available date choices even further if you need more than two saver first-class awards.

In an unusual twist, I've run across many instances when first-class Hawaiian awards in lie-flat seats cost less than economy awards on that same day. So don't rule first class out, it may occasionally simply fall in your lap as the cheapest available award on Hawaiian that day.

Increase Your Hawaiian Balance With Transfers

You can transfer Amex Membership Rewards points from cards such as the American Express® Gold Card and The Platinum Card® from American Express to Hawaiian Airlines to ramp up your account balance. Normally, the rate is a 1:1 ratio, but transfer bonuses have happened in the past. If they roll around again, that's a good time to supplement your balance to get the lie-flat awards to Hawaii that you want.

If All Else Fails: Fixed Value Points for the Win

If you have dreams of arriving as rested as possible in Hawaii courtesy of your Hawaiian Airlines lie-flat seat, but just aren't finding what you need at the saver level using Hawaiian miles, there might still be hope.

From the West Coast, some lie-flat routes sell pretty regularly for around $600 one-way. If you booked those flights using your fixed value points, then you'd be able to do so for about 60,000 miles from a card such as the Barclaycard Arrival Plus World Elite Mastercard (not currently available for new sign-ups). With that card, a $600 ticket would cost 60,000 miles, but then you'd get 5% of them back, making your total cost 55,000 miles for a one-way lie-flat seat.

In that scenario, you'd also earn Hawaiian miles for the "paid" ticket that you could bank and redeem on a future trip. Hawaiian Airlines awards miles based on the distance flown plus an additional bonus for first class. A paid first-class ticket between Honolulu and Seattle would earn you 4,015 Hawaiian Airlines miles.

Normally, I'd recommend redeeming points from the Chase Sapphire Reserve at a value of 1.5 cents each for something like this, but the cheapest first-class Hawaiian tickets are often several hundred dollars more expensive in the Chase Ultimate Rewards portal than when booking directly with Hawaiian.

Personally, I love stopping on the West Coast both when going to Hawaii and when coming home, so looking for Hawaiian Airlines lie-flat seats from the West Coast fits into my usual travel plans.

If you want to fly to Hawaii in a United lie-flat seat, don't be surprised if that costs you 90,000 United miles. Right now, most of American Airlines' lie-flats to Hawaii are pricing at more than 100,000 AAdvantage miles each way. With the dynamic award pricing trend, I'm not convinced that will improve in the short run.

Related: The Best Ways to Get to Hawaii Using Points and Miles

While Hawaiian Airlines just devalued its award chart a bit, you can still get lie-flat seats to Hawaii from just 40,000 miles, and that's a bargain in my book.

Read on for more Hawaiian Airlines tips and reviews:

To listen to an interview with Brian Kelly talking to the CEO of Hawaiian Airlines listen here:

Featured image by Fly Hawaiian Airlines first class (Photo by Summer Hull / The Points Guy)
Editorial disclaimer: Opinions expressed here are the author’s alone, not those of any bank, credit card issuer, airline or hotel chain, and have not been reviewed, approved or otherwise endorsed by any of these entities.