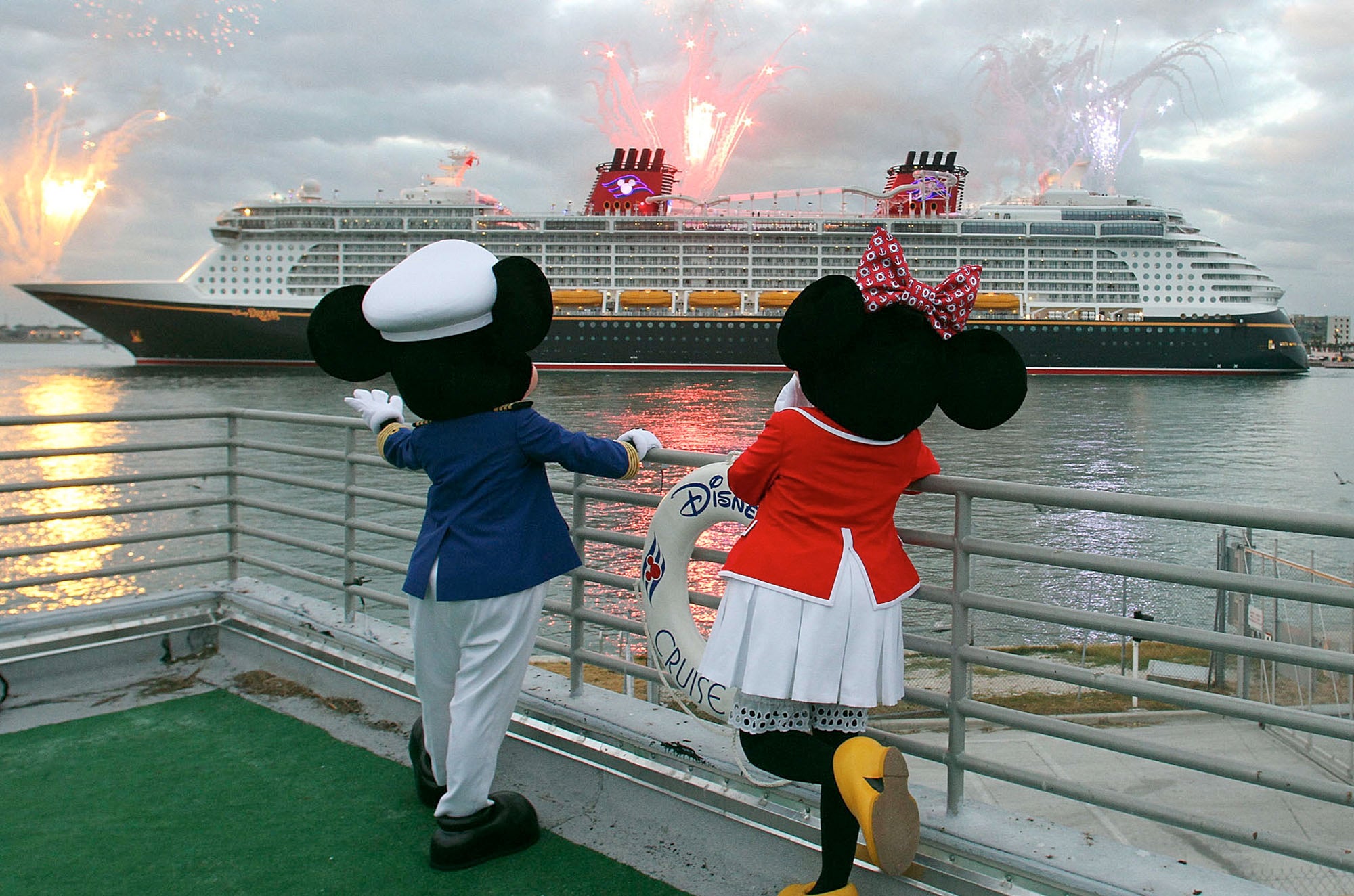 Disney may be a giant in the vacation business, thanks to its many theme park and resort complexes around the world. But in the world of cruising, it’s a relatively small player.

If you’re thinking about going on a Disney cruise, it’s relatively easy to get a handle on your ship options — much easier than it is at a line like Royal Caribbean.

At first blush, you only have to figure out the differences among five different ships. But, in fact, it’s even easier than that because the five vessels can be bunched into just three groups. If you know one member of the group, you know them all.

Each of these groups — known as “classes” in cruise industry lingo — is made up of ships that were constructed around the same time to the same basic design.

As noted above, Disney Cruise Line is a relatively small player in the cruise world — even smaller than it might at first appear.

Not only does Disney have far fewer ships than the big cruise lines such as Royal Caribbean and Norwegian that dominate the cruise business, but Disney’s ships also aren’t as big as the biggest ships operated by those brands, and they don’t carry as many passengers.

That makes Disney Cruise Line an even smaller brand, relative to the big lines, on a passenger capacity basis.

That said, Disney’s cruising division is getting bigger, fast. After going a decade without adding a new vessel, Disney Cruise Line is in the midst of building three more ships. The first of the new vessels, Disney Wish, just began sailing this summer, and two sister ships are due to begin operating in 2024 and 2025, respectively. The new ships, which collectively are known as the Triton class, are nearly doubling the line’s size when measured by passenger capacity.

The Triton class is the shiny new thing at Disney Cruise Line, with the first vessel in the series (Disney Wish) having just arrived in July. At 140,000 tons, Disney Wish is only a tad bigger than Disney’s last two new ships, Disney Dream and Disney Fantasy. But it has a whole new array of Disney wow on board, from a Star Wars-themed “hyperspace lounge” that offers a “window” view of passing starships to Marvel- and “Frozen”-themed restaurants.

In addition, cabins on the ship include seven ocean-view rooms located over the bridge, a first for Disney Cruise Line. The rooms have extended living areas with floor-to-ceiling windows overlooking the bow and out across the ocean. If that isn’t enough, there also are four Royal Suites with a Sleeping Beauty theme, two of which feature a two-story floor plan.

Designed with families in mind (as is the Disney way), Disney Wish's cabins are built with lots of extra berths for kids. While its 1,254 rooms can hold 2,508 passengers at double occupancy (the way most cruise lines measure passenger capacity), it can sail with as many as 4,000 passengers when every pull-down bunk and pull-out sofa in cabins is filled.

The top deck of Disney Wish also is particularly family-friendly, with such attractions as a new-for-the-line high-tech water ride called the AquaMouse. Other notable new features on Disney Wish are a reimagined Oceaneers Club (the area for kids ages 3 to 12 on Disney ships) where children can enter via a slide. The Oceaneers Club also offers a Marvel Super Hero Academy where kids can design (and virtually fly) in their own super suit.

TPG has posted an extensive array of first-look reviews and guides of Disney Wish in the wake of its unveiling, including:

Disney Wish is just the first of three new Triton-class ships that Disney Cruise Line will roll out by the end of 2025. The ship currently is sailing a year-round series of three- and four-night cruises to the Bahamas out of Port Canaveral (near Orlando, Florida).

Disney's Dream-class ships — Disney Dream and Disney Fantasy — are not all that much smaller than Disney Wish, and they also feature several over-the-top attractions, such as the 765-foot-long AquaDuck water coaster that encircles the main pool deck of the vessels.

Designed as a ride that parents can do with their little kids (read: fun, but not too scary), the AquaDuck is a two-person raft ride through a transparent acrylic tube raised up above the pool deck on stilts. If you’re an engineering type, you’ll be amazed as much by its construction as the experience.

Both Disney Dream and Disney Fantasy also are home to a kiddie waterslide, a deck-top kiddie play area and several pools. The ships' insides are loaded with huge children’s play areas, family entertainment and even an adults-only zone packed with bars and clubs.

The children’s areas include such Disney movie-themed pizzazz as a Marvel Super Hero Academy area and a “Star Wars” command post.

The two Dream-class ships also are known for windowless inside cabins that still have an ocean view, thanks to “magical portholes” that offer a real-time glimpse of the outside. These portholes actually are screens built into the walls of the cabin to give the illusion of a porthole view.

If the above idea sounds a little hokey, it is. But the illusion is surprisingly real. The addition of the screens really changes the feel of the rooms. Disney Dream and Disney Fantasy were the first two cruise ships in the world to offer such virtual windows in normally windowless inside cabins — an idea since copied by Royal Caribbean.

Related: 11 ways to save money on a Disney cruise

Both Disney Dream and Disney Fantasy — like all Disney ships — cater heavily to families when it comes to cabin configurations. In many cabins on the ships, you’ll find extra pull-down bunks and pull-out sofas that will allow for four or even five people to stay in a single cabin.

All the extra bunks can make for some confusion when comparing the passenger capacity of the ships to vessels at other lines. Both Disney Dream and Disney Fantasy are designed to hold 2,500 passengers, based on double occupancy — that is, with two people per cabin. But with every pull-down bunk and pull-out sofa filled, the total occupancy of the ship jumps to 4,000.

In another major nod to families, most cabins on the Dream-class ships (and on the Triton-class and Magic-class ships, too) have two bathrooms — one with a sink and a toilet, and one with a sink and a shower or tub. This is something you rarely see in the cruise world, and it’s designed to make it easier for families sharing a room to get ready in the morning.

While more than a decade older than the Dream-class ships and more than two decades older than Disney Wish, Disney’s two Magic-class vessels still feel up to date, thanks to major makeovers in recent years.

Both Disney Magic and Disney Wonder have multiple pool areas and indoor children’s zones that cover almost an entire deck, plus multiple indoor restaurants (in Disney tradition, passengers — and their waiters — rotate each night among three main restaurants) and lounges. They also have large showrooms for nightly Disney-themed shows.

Because they offer fewer and smaller attractions and venues than the newer Triton-class and Dream-class ships, Disney Cruise Line typically uses Disney Magic and Disney Wonder for its more destination-intensive itineraries — trips where you’re going to spend much of your time off the ship and onboard amenities are less important.

Disney Magic, for instance, is the ship that Disney sends to Europe every summer for itineraries that are all about exploring cities such as Barcelona and Rome (reached via the port of Civitavecchia, Italy). Disney Wonder is the ship Disney sends to Alaska each summer; it's also recently been assigned to spend much of its time sailing out of San Diego to Mexico.

Both Disney Magic and Disney Wonder hold 1,754 passengers at double occupancy. With every pull-down bunk and pull-out sofa filled, the capacity for both ships jumps to 2,713.

Like the Triton-class and Dream-class ships, the Magic-class ships boast lots of cabins with split bathrooms — a boon for families.

The Disney Cruise Line fleet is relatively small and easy to understand. For now, there are just three classes of vessels with a total of five ships. If you’re looking to experience the most advanced, modern, amenity-filled ships in the Disney fleet, you’ll want to look at the Triton-class or Dream-class vessels. But the Magic-class vessels are wonderful ships, too. Among their pluses: They offer more intimacy than the other ships and a broader range of itineraries.

Featured image by Tribune News Service via Getty I
Editorial disclaimer: Opinions expressed here are the author’s alone, not those of any bank, credit card issuer, airline or hotel chain, and have not been reviewed, approved or otherwise endorsed by any of these entities.