I'm team DC, but here's why I loved the Marvel-themed restaurant on Disney Wish

Articles
Ashley Kosciolek has spent more than a decade writing about travel, with particular emphasis on cruises. Her favorite cities include London; Amsterdam; Krakow, Poland; Phnom Penh, Cambodia; Dawson City, Yukon; and anywhere known for outstanding pizza and theater. You can follow her daily exploits, both at sea and on land, on Instagram or Twitter @slyjabroni.
Follow
July 01, 2022
•
6 min read 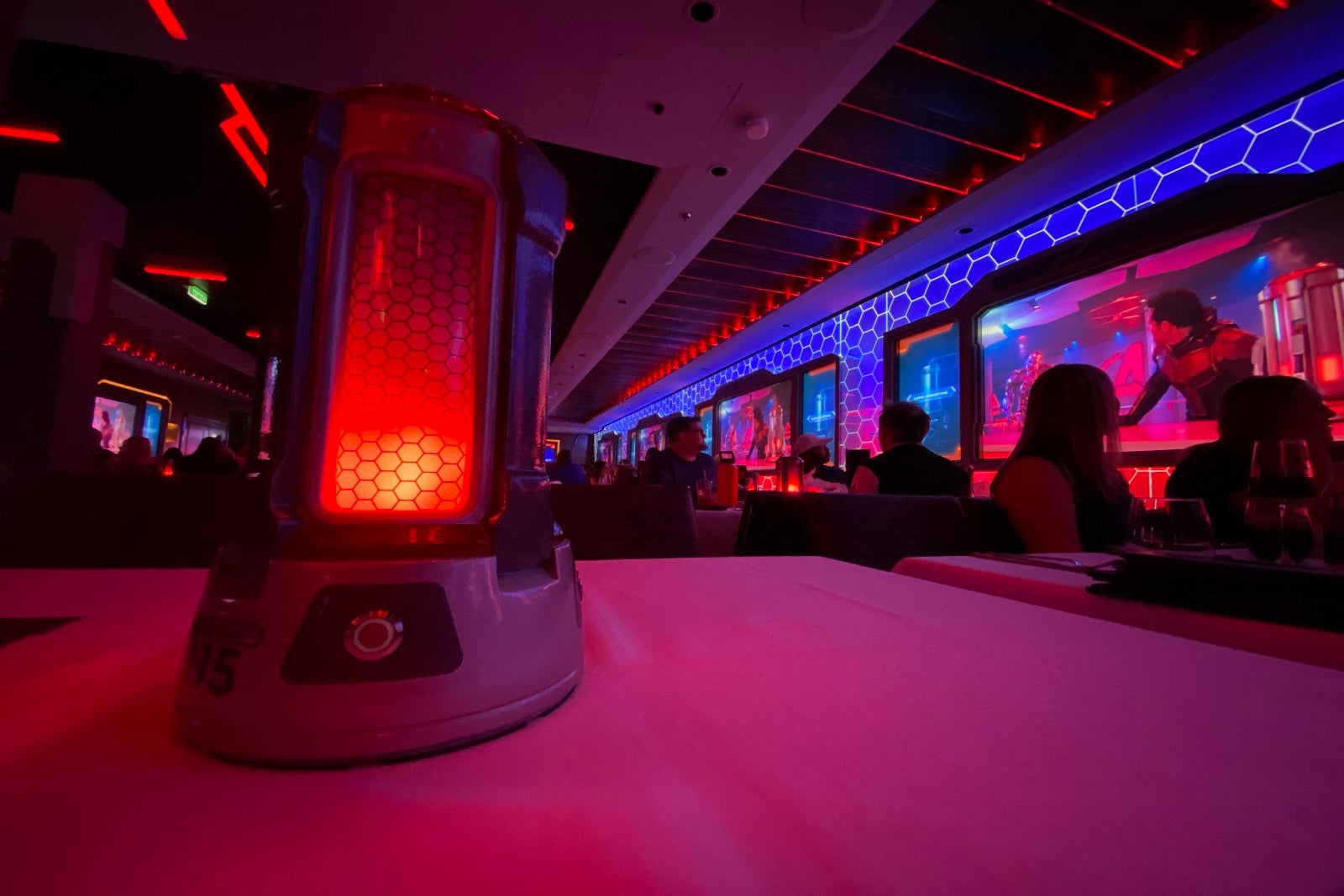 Editor’s note: TPG writer Ashley Kosciolek sailed on Disney Wish on a free trip provided by Disney Cruise Line. The opinions expressed below are entirely hers and weren’t subject to review by the line.

If you've ever wondered what happens when Ant-Man accidentally shrinks a cruise ship down to the size of a toy boat, you're going to love Worlds of Marvel, one of three new dining venues on Disney Cruise Line's newest vessel, Disney Wish.

Since the line's last new-build debuted 10 years ago, technological advancements have come a long way. Magical, jaw-dropping tech is woven into even the most mundane of experiences on Disney Wish, including dining.

I typically represent Team DC when it comes to superheroes, but I had a blast at Disney's Worlds of Marvel dining experience, as I'll detail below. Plus, now I know what, exactly, a Quantum Core is.

Spoiler: Depending on your dining preferences, be prepared for either an absolute treat or a raging headache.

To enter the dining room, you'll walk down a long Deck 4 aft corridor that's aglow with blue lights. Check in with your table number, and you and your party will be whisked to your seats.

The venue itself feels dark, cavernous and crowded, with most tables offering seating for up to eight people. It's a bit like an open food hall — if that food hall were on some sort of spaceship.

It's also loud. (And I mean loud.) Between dinner conversation, squeals from excited children and the volume of the show, dinner at Worlds of Marvel is not exactly a relaxing experience. That doesn't mean it isn't fun — but cruisers who have sensitivities to loud noise or flashing lights might want to dine elsewhere.

The restaurant is divided into two parts, each featuring blue lights that made me feel like I was in the belly of a robot. Black pillars and gold honeycomb-shaped accents add to the techy vibe.

Spoiler alert: Skip this section if you want the plot of the dinner show to remain a surprise.

What awaits you is a cacophony of light, sound — and Paul Rudd. He and actress Evangeline Lilly reprise their roles as Ant-Man (Scott Lang) and The Wasp (Hope Van Dyne), who come to you "live" via TV screens positioned throughout the dining room to talk about the Quantum Core — a device that has the power to shrink objects or make them bigger.

Each table has its own Quantum Core centerpiece, and when directed, diners push the buttons at the bottom to activate them. In an especially amusing turn of events, Ant-Man shrinks a suitcase down to miniature while simultaneously enlarging a towel animal swan made by his room steward.

When he attempts to fix the problem, he ends up also accidentally shrinking Disney Wish, along with everything and everyone inside. Long story short, he eventually gets it right, except for dessert. Waiters then bring dishes of tiny chocolate chip cookies to each table, which is a cute touch.

Note: Have your cameras ready near the end, when you're likely to get an in-person visit from Ant-Man and The Wasp.

Related: Here are 7 ways the brand-new Disney Wish has surprised me

Worlds of Marvel has four menus: a sleek black menu with the Avengers logo on the front for adults; a fun full-color menu with Marvel characters on the front for kids, complete with activities like a word search; a dessert menu that looks like a top-secret file; and a menu of specialty cocktails, mocktails and wine. See photos below for a list of items.

I loved everything I tried, which included the steamed bao buns, heirloom tomato salad, kartoffelsuppe (potato soup), marble loaf bread with red bell pepper dipping sauce and ricotta gnocchi. I was so stuffed I skipped dessert, but I did try some of the mini-cookies, which were fantastic.

I also ordered a mocktail called the Quantum Core Sipper with mango-pineapple juice and Pop Rocks. I wondered why something with zero alcohol was priced at $20, but the mystery was solved when I saw how the drink was served. I'm now the proud owner of my very own Quantum Core, which apparently doubles as a cup. (And, yes, it does light up.)

When you'll eat there

Cruisers who sail with Disney eat on a rotating schedule, shifting to a different dining room each night but with the same table number, dining companions and waiters. That means you'll automatically get to eat at Worlds of Marvel at least once on any voyage.

Passengers are assigned one of two set dining times (either 5:45 p.m. or 8:15 p.m.) for the duration of their sailing. Dining times and assignments are listed in the Disney Cruise Line app.

Worlds of Marvel is a complimentary, immersive dining experience that offers a high level of service and food quality, plus entertainment to keep adults amused and kids engaged. Although it can be difficult to have a conversation over the entertainment volume, it's a lively and enjoyable experience.

Featured image by Worlds of Marvel dining room on Disney Wish. (Photo by Ashley Kosciolek/The Points Guy)
Editorial disclaimer: Opinions expressed here are the author’s alone, not those of any bank, credit card issuer, airline or hotel chain, and have not been reviewed, approved or otherwise endorsed by any of these entities.