There's a $5,000 'Star Wars' drink on Disney's new cruise ship — but its contents are a mystery

Articles
Summer Hull , aka Mommy Points, ran the Mommy Points site for families who want to travel more for less using miles and points for seven years. She now heads up a variety of special projects at TPG when she isn't exploring the world with her own two girls.
Follow
June 30, 2022
•
5 min read 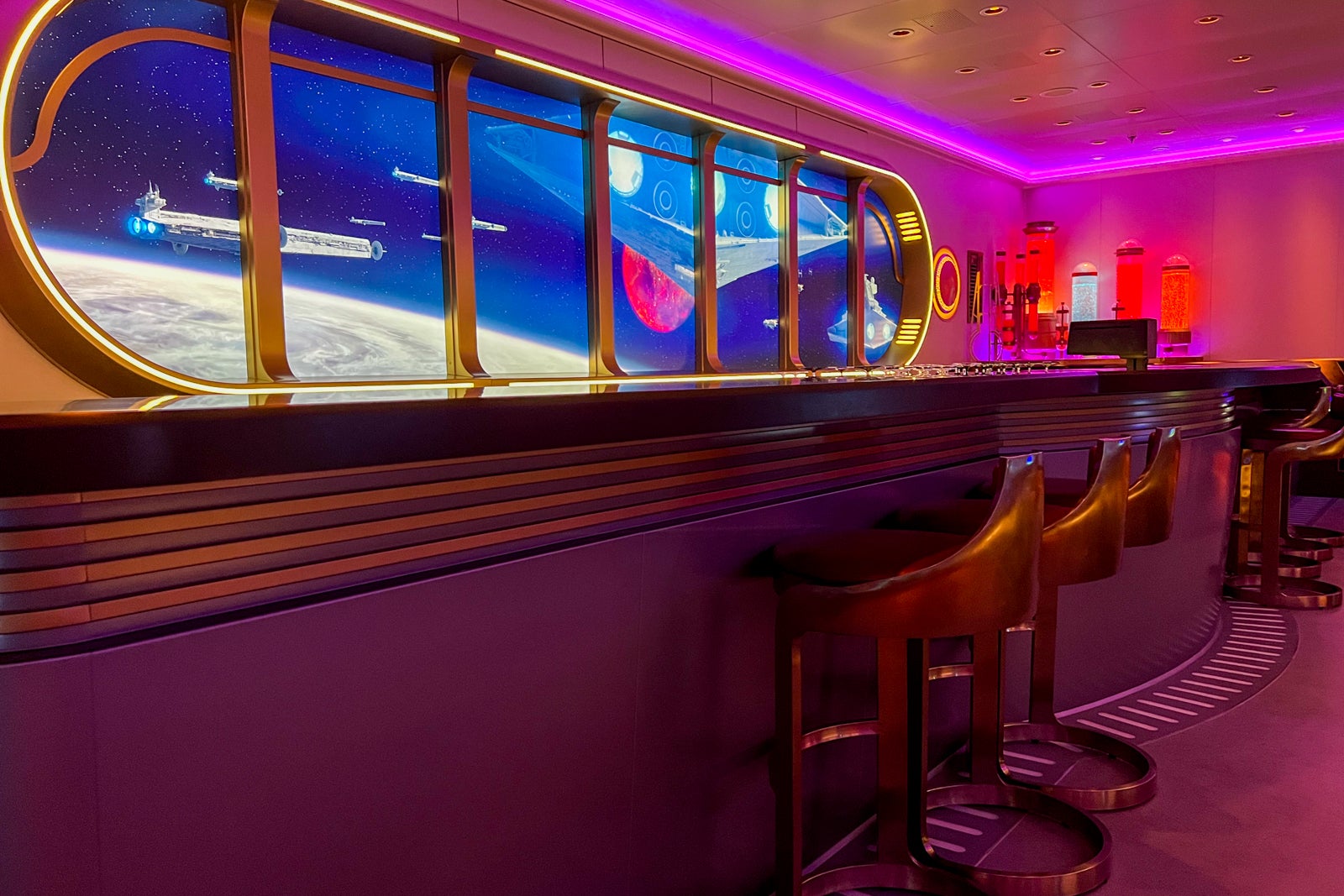 Editor’s note: TPG writer Summer Hull sailed on Disney Wish on a free trip provided by Disney Cruise Line. The opinions expressed below are entirely hers and weren’t subject to review by the line.

Like Boba Fett searching the galaxy for fugitives with huge bounties on their heads, once I caught wind of a rumored $5,000 "Star Wars"-themed drink on the new Disney Wish cruise ship, I went on the hunt. I've experienced the $5,000-per-stay "Star Wars" hotel, so I had to know if there was truth to this smokey liquid rumor.

I deduced the most likely spot for the drink was at the "Star Wars"-themed bar on Disney Cruise Line's newest ship. I quickly learned that the Hyperspace Lounge was unquestionably the hottest spot on Disney Wish.

And if it were real — would it be made of space dust? Would it come with gems from another world that you get to keep?

I was one of the lucky ones that eventually got inside the Star Wars: Hyperspace Lounge a few strokes before midnight. Was there a $5,000 drink on the menu? Here's what I found.

Just before the space bar made another jump through hyperspace, I bellied up to the bar, ordered a normally priced drink and asked the bartender if the lounge's menu actually contained a $5,000 drink. With a sly smile, he confirmed the rumor was true.

Indeed, if you keep scrolling down the menu past the cocktails and zero-proof drinks, there it is. The Kaiburr Crystal rings up at a cool $5,000.

Its description is frustratingly vague, as the menu merely says it's "the galaxy's rarest and [most] valuable cocktail." That's not much to go on when you're about to spend more on a drink than on an entire Disney cruise in an inside cabin.

I would need some serious Jedi mind tricks to uncover just what was inside — or came with — the otherwise nondescript drink.

Related: A first look at photos aboard the Disney Wish

It's not just a drink — it's an experience

While I know that the Kaiburr Crystal is an actual drink (or maybe three?), I wasn't able to use any Jedi skills to learn what the drinks actually contain — though I was told they are "amazing."

What I did learn is that the pricy cocktail is "not just a drink." A Hyperspace bartender told me emphatically and excitedly that it is an experience. A wild (and expensive) experience.

I heard something about codes or puzzles involved to open the box the drink is served in. I spotted what might be the magical drink box in the corner — and even saw Disney Imagineers testing the box with some smoke the day before, while the bar was still closed.

But it's not just a smoke and box presentation. I also heard rumors that actual Stormtroopers might be involved when the drink is ordered.

While that was the end of what I could glean about the $5,000 drink on Disney Wish from my time at Hyperspace Lounge, I got a strong impression that there's more to the drink experience than the whispers I managed to hear.

In the meantime, I thoroughly enjoyed the $15 - $20 cocktails on the menu (some of which also include smoke).

What exactly it's made of — and, more importantly, what happens if you order it — is still a bit of a Mustafarian mystery. Word is that no one has actually ordered it yet, but I'll have my datapad, er phone, ready to capture what space chaos ensues if someone does take the leap and plunk down a credit card ready to earn a ton of "space credits" on the purchase.

Featured image by Star Wars Hyperspace Lounge on Disney Wish (Photo by Summer Hull/The Points Guy)
Editorial disclaimer: Opinions expressed here are the author’s alone, not those of any bank, credit card issuer, airline or hotel chain, and have not been reviewed, approved or otherwise endorsed by any of these entities.