Brazil's Serra Verde Express: One of the world's most beautiful train journeys in the world 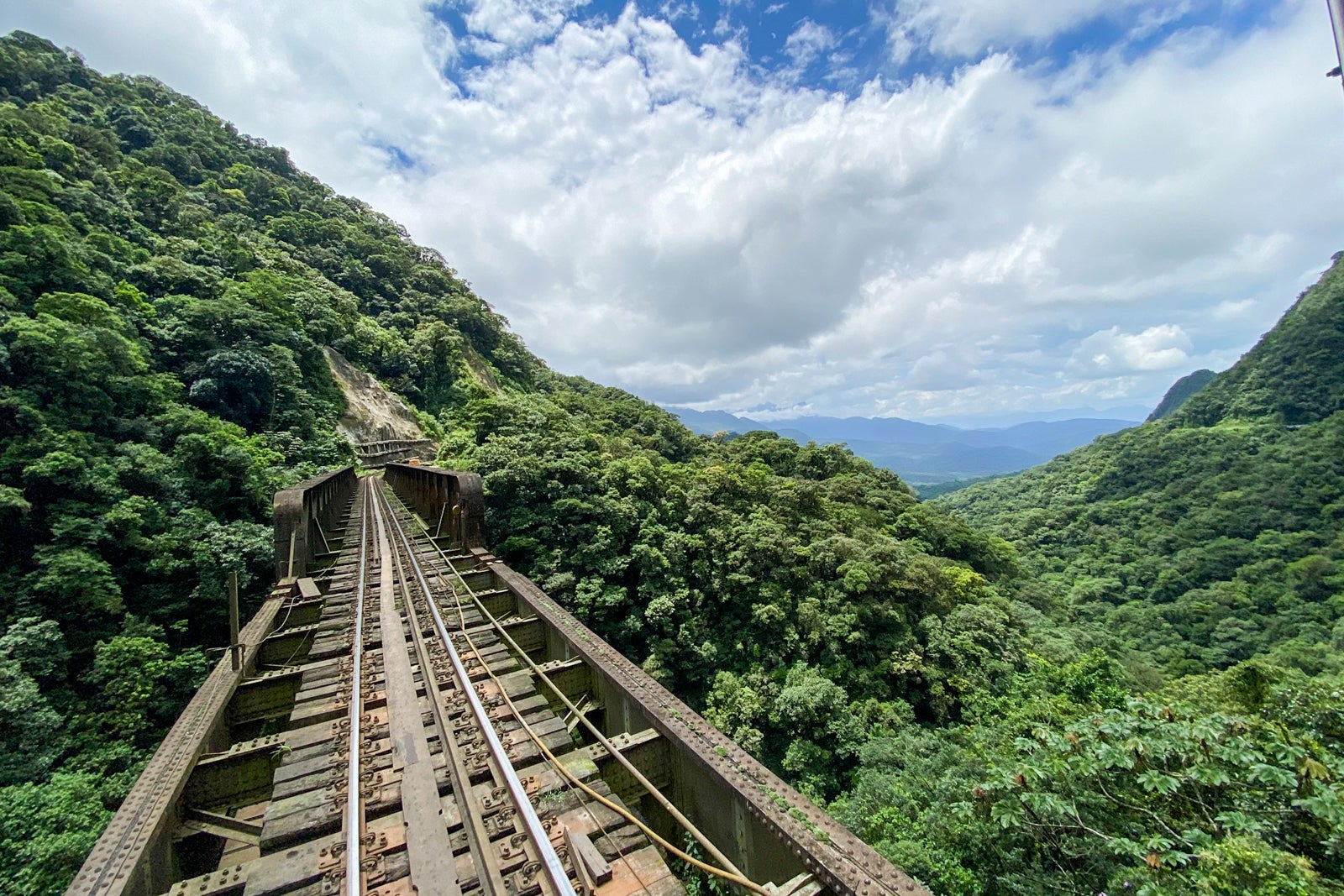 Here at TPG., our aim is to help readers maximize their air travel. But that's not to say there aren't other great modes of transport out there -- including the train, of course.

A big fan of the train over the plane is my dad. He's long dreamed of taking the Rocky Mountaineer through the Canadian Rocky Mountains so, for his recent 60th birthday, I looked into what railway adventure I could take him on that wouldn't cost thousands. After doing a bit of research, I discovered the Serra Verde Express train, which runs from Curitiba to Morretes in Paraná State, Brazil.

As I had already planned a trip to Brazil, he came along for the ride and I took him to Curitiba for a weekend to experience something a little different.

This part wasn't easy. A common problem I have when trying to make online bookings in Brazil from the U.K. -- including for flights -- is that U.K. credit and debit cards rarely seem to work on Brazilian company websites. Either that or the website asks for a CPF (the Brazilian version of a National Insurance number) to be able to complete a purchase.

I tried several times on the Serra Verde website, and after several failed attempts I emailed contato@serraverdeexpress.com.br and received a response the same day. The agent explained that I could easily confirm the payment by filling out a form and sending it back. A couple of emails later and the reservation was confirmed and I had received my voucher.

I booked a packaged called "Litorina Luxo" for R$455 ($89), which currently doesn't appear to be available to book. The most similar package available if you want to try it for yourself is the "Litorina -- Primeira Classe" for R$360 ($71).

The package includes the train ticket, a stop at Mirante do Santuário de Nossa Senhora do Cadeado, special onboard service, breakfast, welcome drink, unlimited drinks (water, coffee, tea, soft drinks and beer) and a bilingual guide. The extras that were included in my package were lunch in a typical "barreado" restaurant, transfers between our accommodation and Curitiba train station as well as a minibus journey back to Curitiba at the end of the day.

Getting to Curitiba's train station is very easy. The city is small and simple to navigate whether using the reliable public transport network, Uber or the city's distinctive orange taxis.

The station is not much to look at from the outside -- or the inside for that matter.

In terms of lounge or predeparture experience, it's pretty much nonexistent. There's a small coffee shop selling all types of Brazilian delights like coxinha, misto quente (ham and cheese toastie) and pão de queijo (cheesy bread balls) and of course, the best coffee in the world. If you're likely to be hungry, I'd recommend eating before you leave (more on that later).

We arrived quite early at the station so had plenty of time to kill before we boarded the train at around 9:15 a.m. The red carpet was fully rolled out for boarding and Silvia, who was our guide for the day, was on hand offering to take some snaps.

Our train trip was in February, which is slightly out of Brazil's main holiday season (November to January), so our train that day was made up of only two carriages -- some trains can have up to 16 or more.

We were shown to our seats by Silvia. My dad and I each had a cozy, brown leather armchair right beside the window for those all-important views.

The décor within the carriage was reminiscent of the Orient Express. The main theme was dark furniture with wooden paneling set off by golds and deep, velvety reds throughout the cabin.

The layout of the cabin was very informal and relaxed. There is an assortment of different seating areas which vary in terms of size and style -- accommodating single travelers, couples and those traveling in families or with friends.

Opposite the small bar area, there was a small sofa area for those wanting to socialize or just change up their view.

It was a nice place to sit and watch the world go by.

There is also both a male and female bathroom at the end of the carriage. Both times I visited, it had been kept spotlessly clean.

We'd barely even sat down before Silvia had arrived at our table with a couple of glasses of bubbles. Though it wasn't Champagne, the rather sweet Moscatel was served cold and was free-flowing so there were no complaints.

Meanwhile, breakfast was being prepared at the bar area. At various points throughout the journey, I sat at the bar and had chats with the crew, just as I would do in the galley on a flight. Though it wasn't quite the same as being at the bar on an Emirates A380 or in Virgin's Upper Class.

Breakfast arrived about 45 minutes after we left Curitiba station. We asked if there was anything gluten-free for my dad, but there was no other option whatsoever. The only choice of drinks was either tea or coffee -- and the coffee was amazing as it almost always is in Brazil.

The theme for breakfast was plastic and pastry. A flattened -- what I think once was -- croissant with ham and cheese, a small sweet pastry and an apple. All of which were wrapped in plastic.

Yes, even the apple was wrapped in plastic.

Despite it not being the most appetizing thing I have ever eaten, it didn't taste so bad. If you like a good breakfast to set you up for the day, then I would highly recommend getting a decent meal at your accommodation before you head to the Serra Verde Express. The breakfast served was more like a midmorning snack than anything else and I was pretty hungry for the duration of the journey. That said, this really was the only downside of the whole experience.

It's really not long after leaving the concrete of Curitiba before the views start to get a lot more lush and green.

And within a few minutes, civilization was completely left behind.

First up on the list of sights to see was the Piraquara Reservoir with the peaks of the Morumbi State Park as its backdrop.

Dotted along the route are a number of abandoned old train stations and houses -- explained in much detail by Silvia in both Portuguese and English.

As time goes on, the train takes you deeper and deeper into the Brazilian "mato" (bush). The various shades of green offset by the blue of the sky and the white of the fluffy clouds really makes for some rather stunning scenery.

All that we had to do was sit back, relax and enjoy the beauty going past the window. The train literally crawls along the tracks at a very slow speed, which is great because it gives you more time to take in the views. I'd go as far as to say I could have probably run alongside it at the same pace -- probably not for the entire four hours though.

Next up was the Represa Veu-da-Noiva or Bride's Veil Dam in English.

We were then treated to a quick pit-stop at the Sanctuary of Our Lady Padlock. It sounds a lot more exotic in Portuguese -- "Santuário Nossa Senhora do Cadeado."

The stunning views across the valley and onto Carvalho Viaduct -- which you can just about see in the background.

Before reaching the Carvalho Viaduct, we crossed the rather rickety-looking São João bridge which looked like nothing much more than a few slats of wood and a bit of steel.

I definitely wouldn't recommend heading to the back of the train for these views if you're scared of heights.

Finally, we arrived at the Carvalho Viaduct -- an extremely narrow viaduct which wraps around the side of a mountain with breathtaking views over the valley.

Then from there, it was a slow descent down into Morretes where our rail journey would come to an end.

As a very independent traveler, I wasn't a huge fan of the next part of the trip as it consisted of a rather tight itinerary with allocated time slots for things.

After leaving the train, we were quickly ushered into a van and taken in our groups -- which the company had organized depending on the package we'd paid for -- and taken to the Serra Verde Express restaurant. We were served the famous "barreado" meal, typical of Morretes. It consists of very few and simple ingredients -- red meat, garlic, onion, bacon and manioc flour which is then mushed to the perfect consistency. Then, to prove that it's done, the pot is tipped upside down over the head of an unsuspecting guest in the hope that nothing comes out.

We were then allowed some "free time" to peruse the cute little town of Morretes, which really was lovely.

What followed was a twenty-minute drive to Antonina, a pretty little coastal town. We were "allowed" about 15-minutes to have a look around the town and take some photos. By this time I was so tired and it was so hot and humid that most of us decided to stay in the van. It then took around two-hours on the bumpiest, windiest road I have ever been on in my life. I think that was partly due to the van's possible lack of suspension.

Despite the less-than-average breakfast and the school-trip style few hours after the train ride, I thoroughly enjoyed my day trip with Serra Verde Express. I would definitely recommend it if you're looking for something different to do on your next trip to Brazil.

Our points-obsessed staff uses a plethora of credit cards on a daily basis. If anyone on our team wouldn’t recommend it to a friend or a family member, we wouldn’t recommend it on The Points Guy either. Our opinions are our own, and have not been reviewed, approved, or endorsed by our advertising partners.
See all best card offers
Related stories
News
Cruise bookings are soaring — and that means higher prices are on the way
News
Biden targets 'junk fees' tacked on to hotel stays, airfare and credit cards
Guide
10 destinations where you can learn about Black history in America
Guide
Southwest Priority credit card review: Valuable perks plus a Companion Pass