11 of the most scenic train rides on Earth 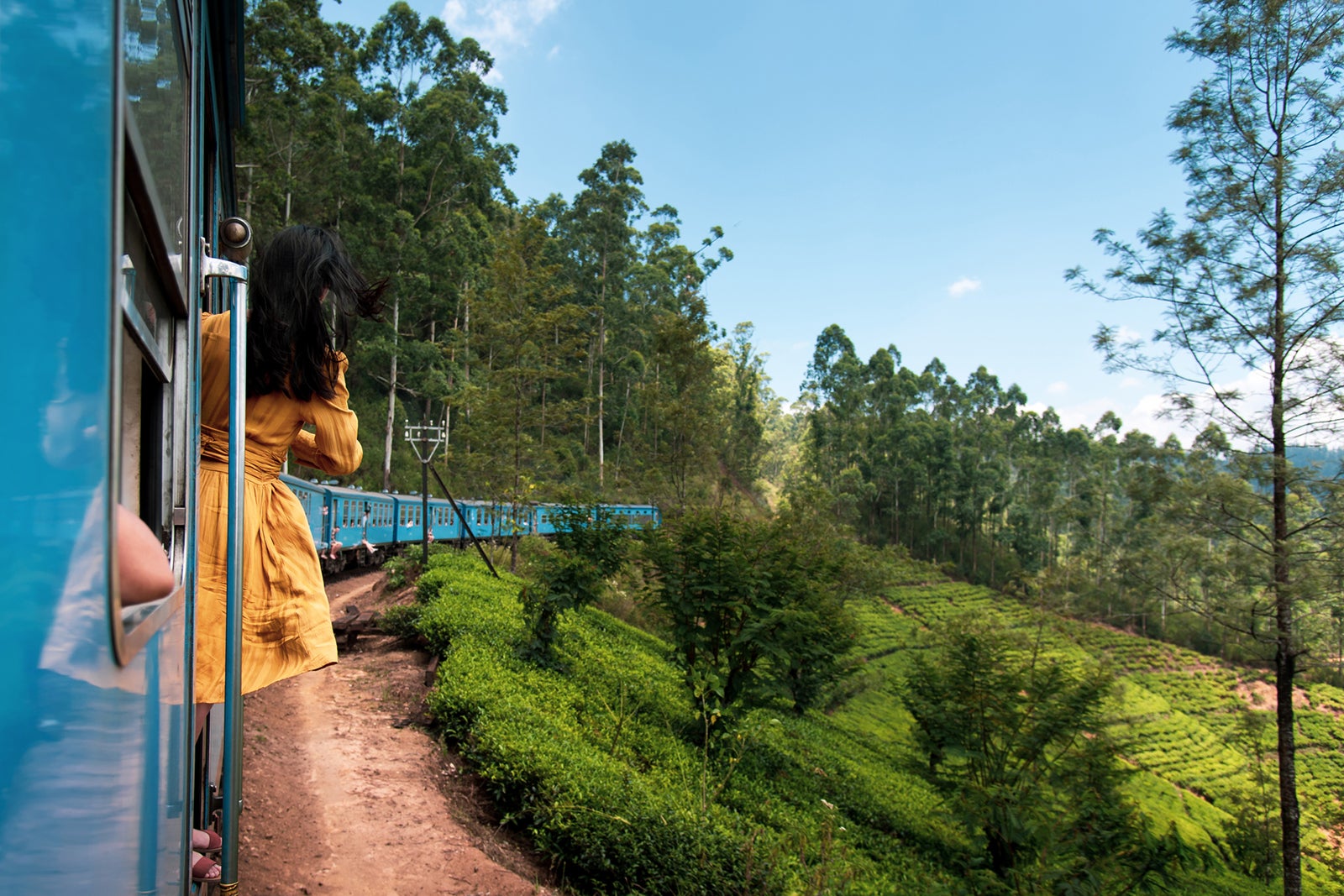 It’s possible to enjoy spectacular views when traveling by air, especially during takeoff and landing. But there’s often not much to see when you’re cruising at 39,000 feet.

That’s one reason why train travel has long been one of the most popular ways to see the world. It’s generally a more relaxed way of getting from one place to the next — no plastic bags filled with tiny toiletries or endless crowds at airport security — and trains can snake through scenic mountain valleys and connect charming, remote villages. They offer steadily panning views of stunning landscapes that are sometimes exceptionally difficult to access any other way.

There are trains you have to take (like the G train in New York City), but sometimes, a journey by rail can be a trip in and of itself. We scoured the globe, reviewed new itineraries and spoke to expert travelers about the world’s most scenic rail routes: You know, the kind that makes you want to wax poetic like Paul Theroux.

From an Amtrak train that leaves New York City every morning to an ultra-luxury locomotive that’s been transporting people back to the golden age of travel (and, more literally, between two South African cities), these are 11 of the most scenic train rides on Earth.

Rocky Mountaineer in the American Southwest

This iconic luxury train operator, famous for its tours of Western Canada, just launched its first route in the U.S. in 2021. Travelers can journey from Denver, Colorado, to Moab, Utah, on the two-day “Rockies to the Red Rocks” itinerary, which features an overnight in Glenwood Springs, Colorado.

Because the train only operates during the day, travelers won’t miss a minute of scenery from the glass-domed train cars with outdoor viewing decks as the towering Rocky Mountains give way to Utah’s almost Martian desert landscape. After all, Moab is the gateway to Arches National Park, named for its surreal sandstone arches and rock formations.

Rates this year start at $1,375 per person, which includes a one-night hotel stay.

“The ride between Kandy and Ella takes you past colorful villages, lush rolling hills, tea plantations and more,” said TPG writer Lori Zaino. “It’s a whole cultural experience — locals in my car were singing and clapping the entire time. For an adrenaline thrill, hang out the window (at your own risk) and watch the world go by.”

The seven-hour ride is extremely inexpensive and a great way to explore the Sri Lankan countryside. Just be sure to opt for a second-class fare so you can look out the window and enjoy the view.

Book through an agency, like Zaino did, to get your ticket secured in advance (from about $15). Though tickets purchased at the station may only be a few bucks, don’t underestimate the convenience of having a seat reserved before you arrive in Sri Lanka.

Book any train of any type in Switzerland, and you’ll probably enjoy uninterrupted views of the Alps, charming alpine villages and glasslike lakes. But for something a bit more adventurous, head to Alpnachstad to ride the Pilatus Luzern, which is the steepest cog railway in the world — ascending to an angle just shy of 45 degrees, though the journey only lasts about 30 minutes.

But you’ll be rewarded with spectacular views from the summit of Mount Pilatus and — if you choose — opportunities to disembark and hike, climb or picnic in the surrounding mountains and valleys. Round-trip fares usually start at 72 Swiss francs, or about $74.

Related: 12 things that surprised me about my 1st luxury train journey

The Northern Explorer in New Zealand

Fly into Auckland and board the Northern Explorer, the nation’s longest-running passenger train, which chugs through Hamilton, Otorohanga, National Park, Palmerston North and Paraparaumu en route to the capital, Wellington. Exploring New Zealand by rail, you’ll see everything from volcanic peaks to the rugged coast while stopping to hike the Tongariro Alpine Crossing or navigate the glowworm-lit chambers of the Waitomo Caves.

“Every time I’ve done the Northern Explorer train, I’ve needed to get between the two places but haven’t been in too much of a hurry,” travel writer and TPG contributor Elen Turner said. After all, the 12-hour journey isn’t exactly the fastest way to get around New Zealand. So be sure to expect a leisurely ride. Prices begin at 219 New Zealand dollars (about $125) for adults.

“Traveling through the Canadian Rockies on the Rocky Mountaineer train from Banff to Vancouver is one of those ‘you only live once’ experiences,” journalist Michele Sponagle told TPG, describing the luxury train’s original and best-known itineraries. “It takes you through the most remote areas — ones you could never access any other way. Imagine postcard-perfect scenery in every direction … (and) be prepared for a forced digital detox since you won’t get a cell signal or have onboard Wi-Fi access frequently throughout your journey.”

The “First Passage to the West” tour is a four-day journey from Vancouver to Banff that crosses the Continental Divide and passes through the so-called Spiral Tunnels carved into the Rockies. In 2023, fares start at $1,800 per person and include four meals, three nights in hotels, a tour and national park pass, as well as station transfers and luggage handling. Shorter journeys onboard the Rocky Mountaineer start around $1,300 per person.

Opt for a luxury Belmond sleeper train experience for both stunning views and gorgeous interiors, such as the Andean Explorer, which travels from Cusco to Puno on Lake Titicaca, and the gleaming white stone city of Arequipa.

No comforts have been overlooked on board, and the train is even fitted with oxygen tanks and masks for passengers who find the high altitude uncomfortable. Entry-level cabins are typically available from about $2,000 per person (based on double occupancy) with meals and tours included.

The Blue Train in South Africa

Since the 1920s, South Africa’s Blue Train has carried travelers between Pretoria (near Johannesburg) and Cape Town in luxurious cars with panoramic windows — best for admiring the passing vineyards and major attractions like Table Mountain.

“I took The Blue Train back in 2012 with a South African friend,” recalled Nadine Jolie Courtney, a luxury travel advisor with Elite Travel International. “I can’t imagine a more spectacular way to see the South African countryside … It felt like being transported back in time to an elevated, bygone era of travel, with white tablecloths, private ensuite bathrooms (complete with tubs!), a dress code for dinner and jaw-droppingly gorgeous scenery … The night sky was particularly memorable. I don’t know that I’ve ever seen so many stars, and it felt as if the whole of the Milky Way was visible.”

“I’ll never forget the unique Colorado vistas, cliffs and being surprised by what was around the next bend,” recalled Swanette Smith, also known as Grandma Points.

Ride a vintage coal-fired, steam-powered locomotive and enjoy stunning views as you crisscross the Animas River, navigate San Juan National Forest and hug the sheer edge of the mountains.

“(It’s) short, very scenic,” said TPG’s executive editor and senior director of content Scott Mayerowitz, who said the 45-mile, 3 1/2-hour ride is really about the views, not the destination. Tickets start at $105.

In addition to reliable service and ultra-clean cars, a ride on Japan’s bullet train is a great way to see the country’s scenery while traveling between Tokyo and Kyoto.

“On my way … I enjoyed a beautiful view of (mountains) and Japanese towns and, if you’re lucky, you can spot the famous Mount Fuji,” said senior marketing manager Adrianna Qi. (If you’re originating in Tokyo, watch for the mountain to appear about 40 minutes into the journey — and be sure to snag a seat on the right side of the train.)

Both Qi and TPG’s former senior executive assistant, Christie Matsui, said that you’ll want to be sure to pick up a bento box at the train station beforehand. Seven-day Japan Rail passes begin at $214.

“Aboard the Jacobite Steam Train, which played the role of the Hogwarts Express in the ‘Harry Potter’ movies, passengers feel like they’re on their way to Hogwarts,” Canadian travel writer and photographer Johanna Read told TPG. “Starting at the base of Scotland’s highest mountain, Ben Nevis, the train passes by Scotland’s moors and lochs and then slows for photos as it traverses the 21 arches of the curved Glenfinnan Viaduct also featured in the films. The end of the line is the pretty seaside town of Mallaig, rather than Hogsmeade.”

Read recommends that travelers on a budget consider the “less magical” ScotRail train, which follows an identical route. “You can (even) take a photo of the Jacobite engine as it departs from Mallaig before hopping back aboard your own train,” Read said.

To ride on board the Jacobite Steam Train, however, expect to spend £52 for a round-trip ticket (about $58).

Discover the Alaskan wilderness by rail with a ride on the Denali Star, which carries travelers from Anchorage to the gates of Denali National Park for imposing views of the route’s namesake, the highest peak in North America.

Only available in the summer season, the Denali Star is a 12-hour, 356-mile journey (from $187 per person, one-way) that traverses the Knik River, navigates the Healy Canyon, passes hundreds of feet over Hurricane Gulch and boasts mountain vistas throughout the journey. The Alaska Railroad also has a popular coastal itinerary in the summer.

For those seeking views of the northern lights, the Aurora Winter Train travels through the backcountry from mid-September to mid-May. Shoulder season fares start at $218 one-way per person from Anchorage to Fairbanks.

It can be harder to redeem points for train travel through the Cape Winelands than for a flight, but it’s not especially tricky to maximize booking your adventure.

If you’re booking a trip on one of the iconic Amtrak routes in the U.S., such as the Adirondack or Pacific Surfliner, earning and using points is still very much an option on the table either via Amtrak Rewards or a fixed-value points program.