The best time to cruise Alaska

Articles
Fran Golden is an award-winning cruise journalist whose work regularly appears in Bloomberg, Travel + Leisure, Afar and other travel outlets. She is the author of several cruise and travel books, including “100 Things To Do In Alaska Before You Die." Fran lives in Cleveland, Ohio. Although fond of lake Erie, her first love is the sea.
Jan. 16, 2022
•
9 min read 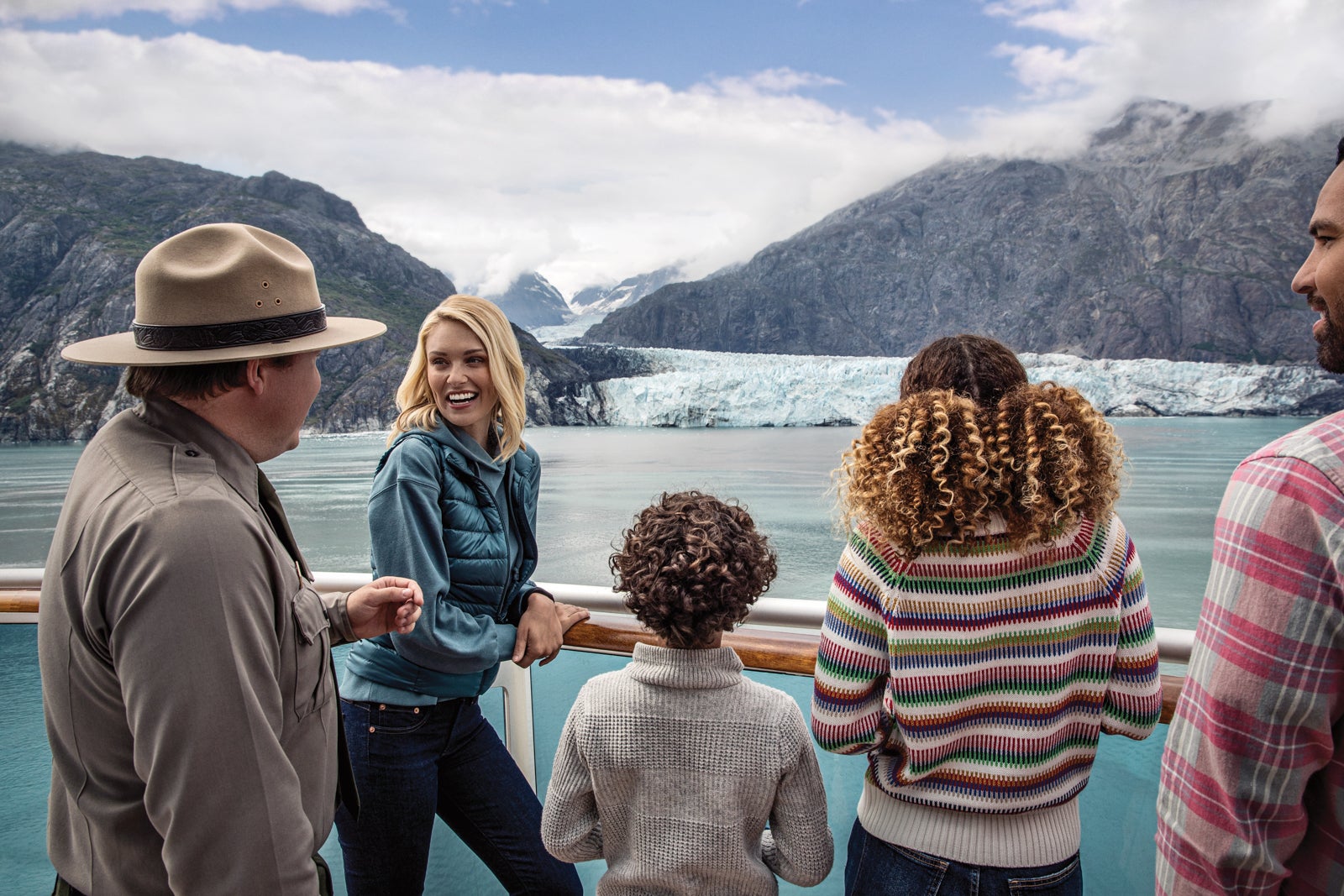 Alaska is a cruise destination with a limited season. Cruise ships arrive in Southeast Alaska in spring, stay the summer and linger only into the early fall. The 49th state’s snowy, cold and dark winters are not conducive to cruising.

Most cruise passengers will head to Alaska between Memorial Day in late May and Labor Day in early September, when temperatures range from slightly chilly to warm during the long daylight hours. Tourist attractions are in full swing, salmon swim upriver and bears (and humans) have access to fishing.

Some adventurous cruisers will board ships when they arrive in Alaska in April to see the remnants of winter. A few big ships cruise into mid-October for those who want a peek at what life is like in Alaska towns when all the other tourists have returned home.

Each month has its advantages, not the least of which is discounted pricing in the spring and fall shoulder seasons. Here is a guide to help you decide when to cruise in Alaska.

After a long winter, Alaska begins to wake up in April, and that includes the wildlife. Small-ship cruise lines such as Alaskan Dream Cruises and UnCruise Adventures have sailings into the wilderness where you may spot bears emerging from their slumber and admire huge waterfalls fueled by the snowmelt. A few big ships, such as the 4,000-passenger Norwegian Bliss out of Seattle, begin their season toward the end of the month, with discounted early season pricing.

You may encounter freezing rain or even snow on your April cruise and should expect to trod through mud. Some tourist facilities — including at national parks — may still be shuttered for the winter.

On the other hand, you will have the opportunity to observe the change of seasons. Expect crisp mornings with temperatures in the 30s, though by the end of the month you may find dry weather and temperatures in the 60s. Bonus: The skies will be dark at night; if clear, you may spot the northern lights.

Related: Caribbean vs. Alaska cruises: Which itinerary will I like more?

Big-ship cruise lines such as Holland America Line, Princess Cruises and Royal Caribbean ramp up their operations in May, as do Disney Cruise Line (at the end of the month) and small-ship and luxury lines. Early season deals may be available.

Attractions and shops will switch to peak-season hours at the end of the month; Denali National Park and Preserve switches into summer mode in May. You’ll find those who work in tourism excited to be back in business, considering that many people in Southeast Alaska earn their income from out-of-state visitors. Cruise lines will offer the opportunity to extend your cruise with land tours that include accommodations, transportation and some meals.

While early May often carries a chill in the air, by the end of the month you may encounter temperatures in the 60s. The warmer weather means glaciers begin shedding ice more frequently — so you have a better chance of experiencing the sight and sound of a house-sized chunk of ice calving into the sea. There’s also the bonus that Alaska’s large mosquito population has yet to emerge.

Related: 6 national parks you can reach by cruise ship

The cruise season beefs up in June, the number of ships growing, and the season is in full swing by the end of the month. The midnight sun means many hours of daylight, especially on June 21, the longest day of the year — when you’ll have to stay up late to see any darkness at all.

Early in June, the ships are still mostly the realm of adults, with the family crowd — including multigenerational groups — arriving later in the month.

Shore excursion experiences abound. Temperatures are pleasant — in the 60s and sometimes higher, with wildflowers in bloom and glaciers calving. Anglers will find opportunities to reel in halibut along with king and sockeye salmon and rainbow trout. In addition to humpbacks, you may also spot belugas and seals with their pups as you sail.

At the beginning of the month you may still be able to find some early season pricing; the peak season for Alaska cruising begins in late June.

Summer is the height of the Alaska cruise season and that means crowds in port towns, especially when several ships are in port at the same time. You may have to wait hours for a table at Tracy’s King Crab Shack in Juneau.

It may come as a surprise to many, but July and especially August are both quite rainy, so don’t expect endless sunshine. That said, you are in Alaska at a time for festivals and other special events, and frontier towns really come alive.

Temperatures will be in the 60s, sometimes higher – you may even see 80s in Juneau in July. During long days of light, you’ll find hearty Alaskans swimming on beaches and enjoying watersports. Shore excursion options will be in full swing.

During both months, you will encounter peak-season pricing. Unless you booked early, cabin choice may be limited — especially if you are looking for a fancy suite or cheap inside cabin, which tend to be the first categories to sell out. (Balcony cabins are particularly popular in Alaska.)

Mosquitos enjoy the summer too, so pack bug spray. July and August are also spawning season for salmon, so you may spot grizzlies and brown bears near rivers and streams.

Keep an eye out for seabirds and songbirds, seals, Stellar sea lions and humpback whales. Marine life is so prolific that some small-boat shore excursions guarantee you will see animals. Bears will be fishing; in late August, they will be looking for blueberries, which also become a featured item on restaurant menus. Toward the end of August, you’ll start seeing leaves changing to fall colors.

Related: 8 activities to try on your next visit to Alaska

The beginning of September is much like August, but after the kids go back to school and the family crowd departs, it’s shoulder season for cruising and pricing drops. You will experience a change of season, with cooler temperatures (in the 50s or lower) and some rain.

Mid-to-late September is one of the best times to spot wildlife in Alaska. I have had extraordinary experiences such as watching a pod of humpback whales gather together in bubble-net feeding (corralling fish in a “net” of bubbles), filling their bellies in preparation for their annual journey to warmer waters. Bears will be hunting for the last of the berries and salmon; caribou, deer and moose will be mating.

You’ll see colorful fall foliage but not mosquitos, as they will have departed. National park facilities and some tourist businesses will switch to winter hours. September is also a great time to get deals on souvenirs, as merchants sell off this year’s goods at the end of Alaska’s tourist season.

On clear nights you may have a chance to spot the northern lights — though they won’t shine as brightly as they do in winter. Tip: Rather than staying up all night, see if your ship or pre- or post-cruise hotel has a sign-up sheet for people who want a wake-up call should the lights appear.

A limited number of cruises in October make it possible for cruisers to experience a taste of Alaska in winter, without sub-zero temperatures. You will want to bundle up; the average temperature in Juneau in October is 39 degrees. Days will be short — there are only about 10 hours of daylight. You are likely to experience rain and maybe snow.

Some attractions and shops will be closed for the winter, though your cruise line will still operate a full roster of shore excursions. On the plus side, you will experience Southeast Alaska towns as they are most of the year, sans tourist crowds. Sit in a bar and talk to the locals as they prepare for the long winter ahead. Cruise fares will be discounted.

Related: 6 ways to get a deal on a cruise

Alaska is a thrilling cruise destination no matter which month you choose to sail. Look to the early and late sailings of the season if you are a bargain seeker. Choose a May or June sailing for drier weather and fewer mosquitos; the summer is the best time to cruise to see abundant marine life and birds. September can be a great month to see wildlife.

Featured image by (Photo courtesy of Princess Cruises)
Editorial disclaimer: Opinions expressed here are the author’s alone, not those of any bank, credit card issuer, airline or hotel chain, and have not been reviewed, approved or otherwise endorsed by any of these entities.