Articles
Carly Caramanna is a theme park and travel journalist who has spent her professional career in New York City, Nashville, and Los Angeles. An expert on all things wining and dining at theme parks, she contributes to The Points Guy and many other outlets. Adventuresbycarly.com.
Sept. 05, 2022
•
9 min read 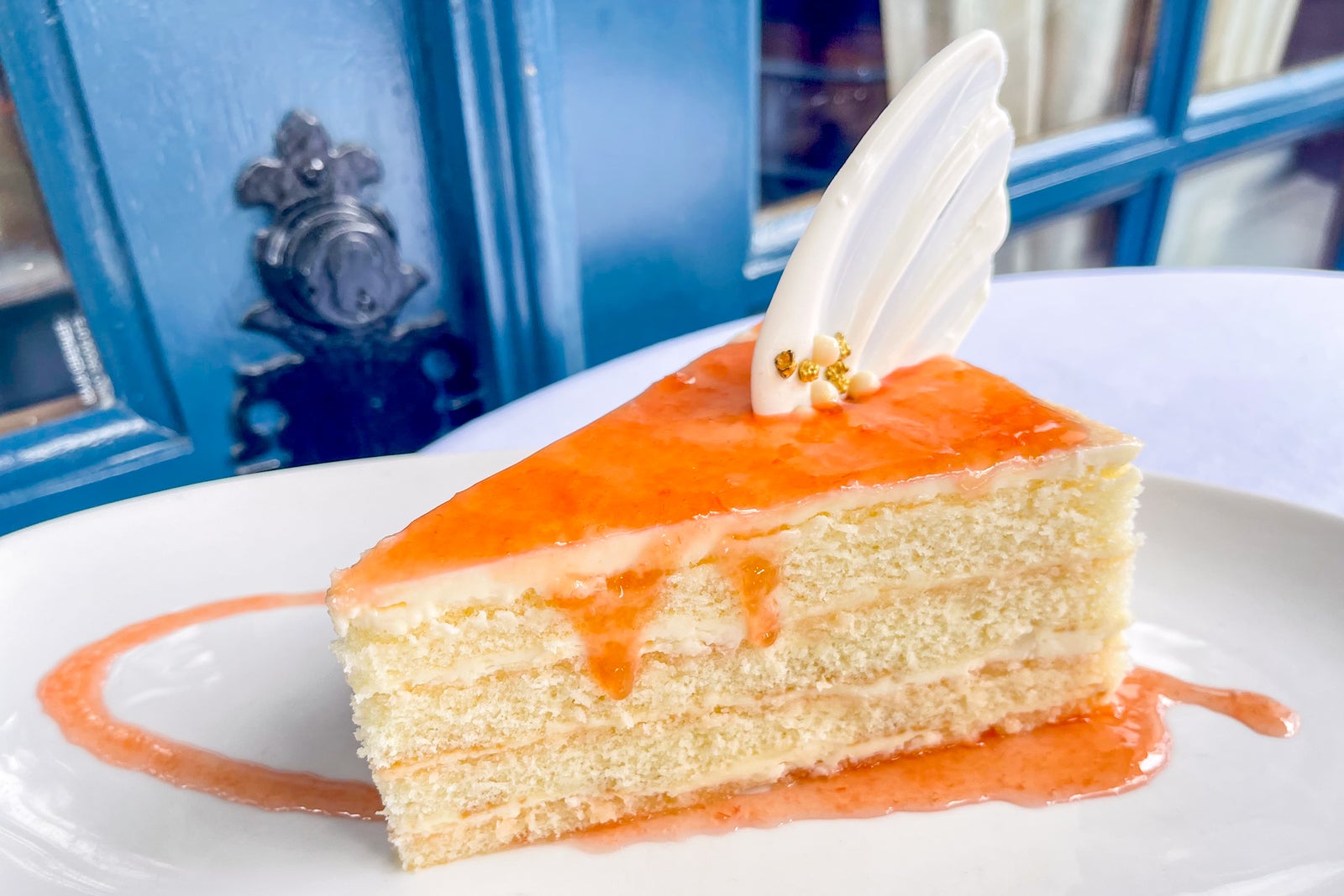 For the average guest, theme parks may mean characters and coasters, but others are searching for a different kind of thrill.

At parks all across the country, surprising gastronomical playgrounds await with menus that are filled with much more inspired options than a simple corn dog or vanilla soft serve. From Walt Disney World to Knott’s Berry Farm and beyond, storytelling isn’t just communicated through immersive attractions but in fanciful restaurants with thematically appropriate bites. And I'm 100% here for it.

Here are the 13 absolute best things to eat that you can only get in theme parks.

With Dolly Parton as its dreamer-in-chief, Dollywood in Pigeon Forge, Tennessee, pulls out all the stops — and its food is no exception.

Even with award-winning Southern specialties, it’s the cinnamon bread that has garnered a cult-like following. With a can't-miss aroma that draws you in and sweeping lines morning, noon and night, the park sells an estimated 2,000 loaves a day.

What is in this sought-after goodness? Each loaf is dipped in an irresistible mixture of cinnamon and margarine before being baked in custom ovens. The shareable treat is pure decadence.

At Holiday World in Santa Claus, Indiana (yes, that’s a real place!), it’s turkey day every single day of operation at Plymouth Rock Cafe. At the Thanksgiving-themed eatery — located in a Thanksgiving-themed land — you can gobble up comfort foods in a cozy setting.

The ultimate taste of home? The Thanksgiving dinner platter. Its buttery mashed potatoes and flavorful, tender meat alone are worth a visit to the award-winning Midwest theme park.

The story of Knott’s Berry Farm is as tantalizing as the food inside its gate. What started as a literal berry stand has transformed into a world-class park that continues to honor the humble fruit that began it all.

Dozens of items parkwide celebrate the flavor but the boysenberry soft serve takes the cake — or cone. Available from Mix-It-Up Ice Cream, the custard-like ice cream is creamy and has just the right amount of tartness coming through.

With a price tag of this magnitude, it would be very easy to scoff at the $100 Pym-ini sandwich. And it's OK if you do, but at least know what it's all about.

Related: These are the best restaurants at Disneyland

Universal Orlando Resort committed to the theme for The Wizarding World of Harry Potter, with every corner of the incredibly immersive lands acting as movie-like sets.

Theatrics aside, the food is a celebration of British delicacies with standout bites that would make Harry proud, like fish and chips prepared from freshly flown-in cod. But it’s an unassuming beer stand that’s home to one of the very best snacks.

Served from the Hopping Pot, the beef pasties are the perfect way to refuel at the park.

Traditionally executed and with three per order, the pasties have a flaky and buttery crust that’s filled with flavorful spiced beef. Pair them with Wizardly beverages, like Butterbeer and Pumpkin Juice, and enjoy from the welcoming picnic tables nearby that offer prime views of all the action.

While Legoland resorts are geared toward the younger ones, “everything is awesome” for guests of any age thanks to their most iconic snacks.

Apple fries are a staple at all three properties — located in California, Florida and New York — and are available from Granny’s Apple Fries. This unique creation takes fry-like slices of apples and then lightly batters them before deep frying. After a generous coating of cinnamon, they are served warm with the option to add soft serve vanilla.

Universal Studios Hollywood may not be as big as its sister park in Orlando, but it packs a punch when it comes to unique food offerings exclusive to its location in Southern California.

Mummy Eats, located next door to the thrilling attraction it shares a name with, may look like your average corn dog stand — but it's not. Drawing from local cultural influences, it serves a variety of hand-dipped, freshly prepared corn dogs. The winner is a Korean-style dog that offers a nice level of spice thanks to its seasoned, crunchy panko breading. This — and the ride — are not for the faint of heart.

Chocolate may be the obvious choice when visiting Hersheypark but the historic park pays tribute to its incredible past on menus across the property. The newest restaurant, The Chocolatier, features drool-worthy chicken and waffles created to honor the founding father of chocolate, Milton S. Hershey. It was his favorite dish, after all!

The recipe uses hand-breaded chicken and a housemade sweet potato waffle that is topped with honey hot sauce and apricot butter, producing a perfect sweet-meets-spicy combo. You’ll eat well and feel good knowing it was created in partnership with the culinary students at the Milton Hershey School, a cost-free school for lower-income children.

Modeled after an 1880s town, the park exudes authenticity in its architecture, entertainment and craftsmanship. That authenticity also trickles down to its surprisingly delicious culinary offerings.

Prior to opening, the park’s newest restaurant, Rivertown Smokehouse, sent its staff to Texas to train directly with smoke masters. The result? Incredible barbecue platters with all meats smoked and carved before guests in the open-air kitchen. Paired with the addictive sauces made in-house, it’s a total home run.

For a taste of Tinseltown, look no further than the Hollywood Brown Derby in Disney’s Hollywood Studios.

Modeled after the iconic former restaurant once frequented by the likes of Clark Gable, the team whips up decades-old recipes of yesteryear. Although it's a dessert, the signature grapefruit cake feels oddly light. With layers of delicate cream cheese frosting and vanilla sponge cake, it’s a far cry from the heavier desserts found in the park. History can be oh so delicious.

When visiting The Wizarding World of Harry Potter, resist the urge to go for the obvious choice of Butterbeer ice cream and instead try the chocolate chili.

Scooped only at Florean Fortescue's Ice-Cream Parlour in Diagon Alley, the hard-pack ice cream is a flavorful journey. Each bite begins sweet before crescendoing with a tingle of spice that cuts out the richness from the chocolate. The result is downright magical lick after lick.

Related: 16 secrets to know before your next Universal Orlando trip

While Walt Disney World shines when it comes to table service dining, Disneyland arguably has some of the best quick service and snack options.

A bit of beloved sweetness has been captivating parkgoers for years at the Jolly Holiday Bakery Cafe. Modeled after the iconic attraction, the moist coconut Matterhorn macaroon is topped with melted white chocolate and a sugary "snow" finish. The treat has become so popular it’s known to sell out early in the day, so plan accordingly.

There’s no shortage of globally inspired bites at Epcot (both during the annual Epcot Food & Wine Festival and any other time), but the Mediterranean-influenced Spice Road Table continues to remain a hidden gem.

The menu is small, focusing on tapas-style plates — but the payout is worth it as you dine in this atmospheric, waterside restaurant. Its presentation of dolmas is expertly done by taking grape leaves and filling them with savory rice and herbs then pairing them with charred lemon and marinated olives and garlic. The plant-based dish is bursting with flavors that will satisfy but not weigh you down.

Featured image by (Photo by Carly Caramanna/The Points Guy)
Editorial disclaimer: Opinions expressed here are the author’s alone, not those of any bank, credit card issuer, airline or hotel chain, and have not been reviewed, approved or otherwise endorsed by any of these entities.