Articles
Scott Mayerowitz is the executive editor of TPG and oversees all of TPG's editorial coverage. He previously was a reporter, then editor, at The Associated Press and reported for ABC News.
Follow
Aug. 15, 2022
•
9 min read 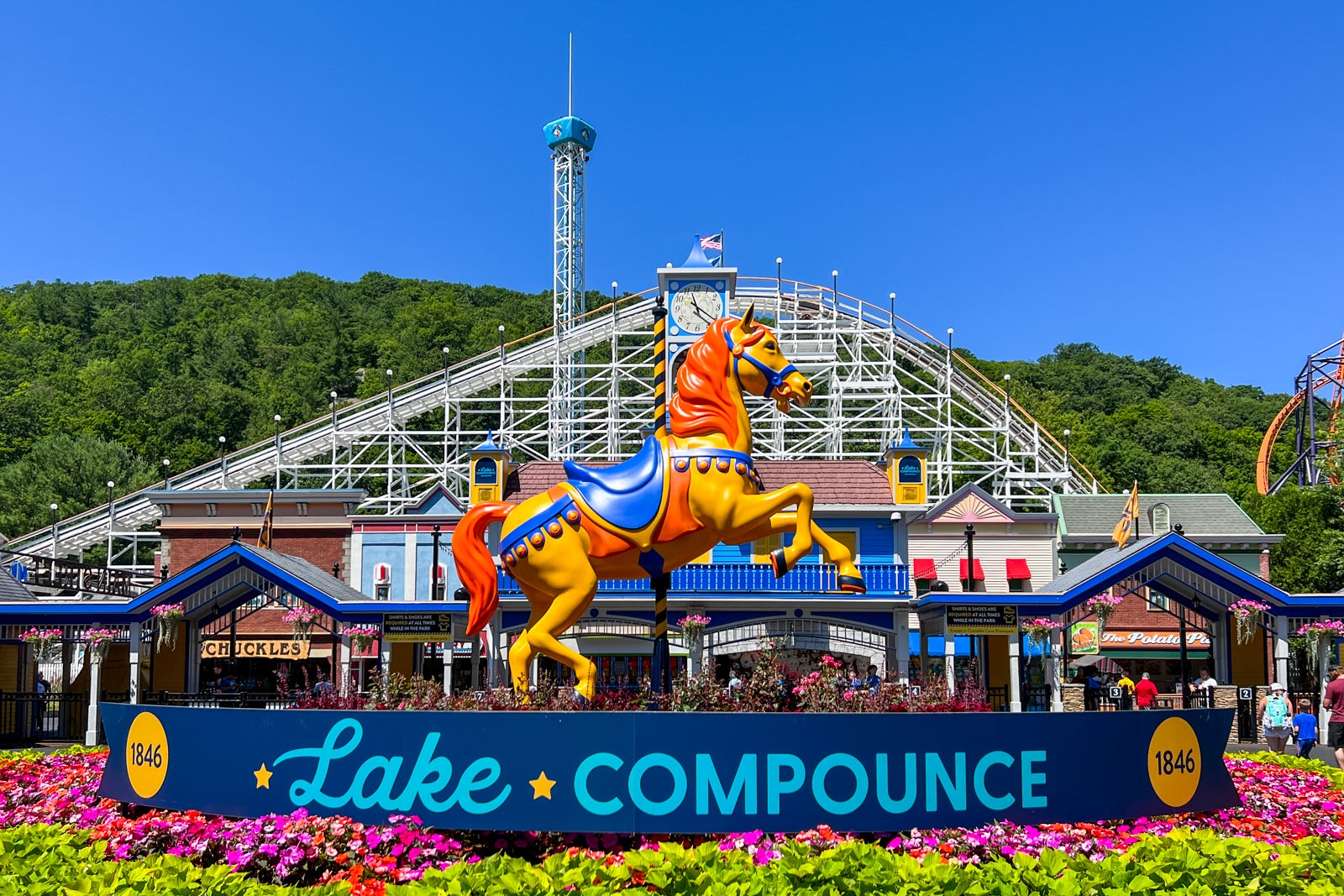 Long before Disneyland, Universal Studios or Six Flags, there were local amusement parks that visitors arrived at by trolley.

That’s right: There used to be a network of regional trolleys — especially in the Northeast — that connected communities decades before cars would be commonplace.

And one of the highlights was a jaunt out to a big park, lake or other scenic spot that also had a few rides.

After a year that included visits to Disneyland in California, Walt Disney World in Florida, Universal Studios Orlando and Legoland New York, I decided to try something a bit different.

On a recent summer weekend, my family and I took a trip back in time to one of those parks: Lake Compounce. The Conn yecticut park blends history with some modern rides as it tries to balance being America’s oldest continuously operated theme park with something that today’s “on-demand” generation will enjoy.

The verdict: It succeeds wonderfully.

This isn’t the type of park I’d fly out of my way to reach, but it’s an amazing regional attraction and one that bigger parks could learn from.

The theme park, named after a local lake, dates back to 1846 when a local scientist decided to conduct some electricity experiments at the lake, according to the park’s online history. Of course, people came out to watch, inspiring the property owner to set up picnic tables, build a walking path and set up an area to swim and boat. A gazebo was added for lakeside band concerts.

In the following years, a bowling alley and pool tables were added along with swings.

In 1895, the Bristol and Plainville Tramway Company started bringing people to the park by trolley.

Eventually, roller coasters were added, including the 1927 Wildcat, which is still in operation today.

The park would have its ups and downs throughout the decades. Trolley service ended after World War II as cars took over the American landscape. Older-style theme parks hit challenges from larger, corporate-owned ones.

RELATED: 8 ways to make the most out of a theme park trip

Today, the park mixes modern rides with some of the classics.

The best part: There is still a trolley. It might not get you to the park but it is an attraction by itself. The historic 1911 trolley hugs the lake shore and takes visitors on a short ride to the edge of the park where some catering pavilions sit.

Lake Compounce has found ways to preserve the past but still compete with modern parks.

There are two main areas: a water park next to the lake and swimming area, and a section with rides — old and new.

The water park, called Crocodile Cove, has a wave pool, lazy river and a number of waterslides. It was enough to occupy my seven-year-old daughter for nearly five hours.

By the end of the afternoon, we’d forgone the waterslides and decided to take a swim in the lake — like so many generations of the park-goers before us had. After reluctantly taking a dip, my daughter found that to be — almost — as enjoyable as the slides and splashed around with a friend for way longer than I would have ever guessed.

In other words, you don’t need the fanciest rides to have fun.

On the thrills and attractions side, there is Wildcat, the wooden coaster dating back to 1927.

Yet, the real highlight for me was Boulder Dash, a larger wooden coaster than goes through the woods and was unlike anything I’ve ever ridden. It’s been voted the world’s top wooden coaster at least five times and spent two decades in the top five.

Exiting, my friend turned to me and noted: “That was by far, one of the best wooden coasters I’ve ever been on.” There was no disagreement here.

For those not into nostalgia or wooden coasters, there was Phobia Phear, a modern steel coaster that also proved to be a great thrill but didn’t seem to fit the historic theme of the park.

And for the kids, there were plenty of other rides like swings, a flying elephant ride, bumper cars and a driving track through a 1950s village in miniature Corvette convertibles.

Of course there were plenty of arcade games that kept us entertained — and drained our wallets. The typical pricing for a game was $5 for a try or $10 for three tries.

My daughter loved them and we spent almost as much at the arcade as we did on her admission.

We arrived at the park as the gates opened and raced onto the rides, virtually line-free, for the first hour. Then, crowds started to build. Once the water park closed for the day, the lines grew more. We never had the epic waits you might find in Orlando but you couldn't just hop on a ride.

To cap our night, the resort had 9 p.m. fireworks over the lake — the perfect way to end a summer day.

Single-day tickets are listed at $59.99, but there are often sales.

Recently, online advance weekend purchases cost $49.99 and weekdays were $34.99. We snagged tickets the day before our Saturday, July 9 visit for just $29.99.

The park is open April–October, with just weekend hours in the spring and fall.

The park is testing out a new line-cutting feature called Speedy Pass. There are three levels, with weekend pricing at $15, $20 or $35 per person. Lake Compounce runs the service a bit differently than other parks. The pass allocates a reservation time for guests. The more you pay, the shorter the wait until your next reservation. However, we skipped the pass since it is currently only good for four rides at the water park.

The food certainly won’t wow. But all the theme-park staples are here and we managed to find something for everybody.

The park doesn’t accept cash anywhere — something regular TPG readers love but others should be aware of. You can load cash onto a debit card at the park.

Like many theme parks, food and drink purchases — even at their restaurants — don’t code as dining. My test purchase on my American Express® Gold Card came up as “other purchases,” not earning a bonus. I’ve found similar results at other parks and typically use a card with a bonus on everyday spend for everything in the park. (Note: At Walt Disney World, the sit-down restaurants do generally tend to code as dining while the stand-alone kiosks don’t.)

Since I was feeling very nostalgic and wanted to learn more about trolleys, we drove for about 30 minutes the next morning and visited the Shoreline Trolly Museum in East Haven, Connecticut. (The museum calls itself the oldest continuously running suburban trolley line in the U.S.)

Yes, the first day of our weekend was spent enjoying a theme park whose early days were made possible by trolleys. And our second day was paying homage to those very trolleys.

Our visit started with a ride on a 1905 trolley that ran until 1947. It was restored in 2016 and today runs along a 1.5-mile track, once part of the Branford Electric Railway, that the museum maintains.

The trolley operator explained the history of the transit network across Connecticut, showed us how this trolley worked and let everyone ring the bell. I’m not sure who was more excited: me or my seven-year-old daughter.

On the return trip, we stopped at the museum’s workshop and storage barns. This is where the rest of the collection is stored and another guide gave us the history of trolleys — the development from horse-drawn carriages up to the post-World War II demise, thanks to the car.

There are cars from Connecticut, as one would assume, plus many others from all over including Lynchburg, Virginia; New Orleans; Toronto; and Johnstown, Pennsylvania. (While it is far from being a trolley, the museum is also home to a PATH train car that was under the World Trade Center on 9/11.)

After touring the collection, we hopped back on the 1905 trolley for a ride back to our cars and the drive home.

Theme parks are constantly pushing for the latest technology, finding new ways to thrill and entertain us.

But there's something to be said about the classics.

Lake Compounce is one of those surprising parks that brings joy to guests of all ages. Boulder Dash was unlike any wooden roller coaster I've ever ridden. And the old time feel of the park made everything seem just a little more special.

No, it's not going to compete with the magic of a Disney World or the big coasters of Cedar Point.

Lake Compounce knows exactly what it is and is happy being just that, nothing more.

Featured image by (Photo by Scott Mayerowitz/The Points Guy)
Editorial disclaimer: Opinions expressed here are the author’s alone, not those of any bank, credit card issuer, airline or hotel chain, and have not been reviewed, approved or otherwise endorsed by any of these entities.