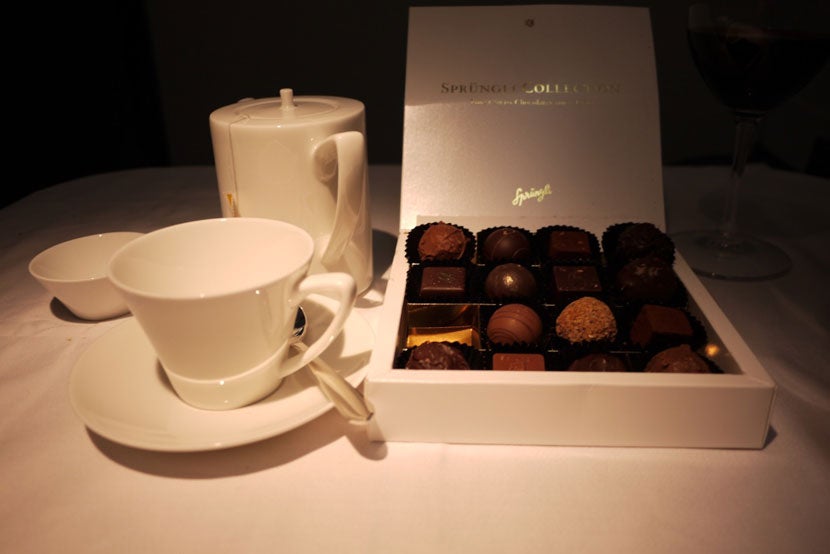 In Before Times, stale pretzels didn’t give airline passengers’ palates much to be excited about. When flying a domestic airline such as Delta or United. however, you could always rely on Biscoff and Stroopwafel cookies for a sweet pick-me-up — and lots of country-specific airlines had stepped up their snack game, serving both complimentary and for-purchase items that gave you a true taste of their home country even before touching down.

Whether you have a sweet or salty tooth or simply want to take the edge off with a locally sourced drink, here are some pre-COVID airline F&B options that have us eager to get back in the skies and get our hands on.

Thanks to a collaboration with Tjoget, a popular neighborhood restaurant and bar in Stockholm, you can have an AW (or “afterwork,” pronounced “ah-veh,” the Swedish word for happy hour) before you ever touch down. Sip on ready-made, low-alcohol cocktails and (alcohol-free) mocktails made with Scandi ingredients like black currant and beet root in business class on long-haul flights. If you’re looking for Swedish fish, you’ll have to bring your own — true Swedish snacks onboard include Gott & Blandat gummies, a Swedish candy (with some fish shapes) in fruit and licorice flavors; and Larssons Chips, made by seventh-generation potato farmers in Southern Sweden.

Love it or hate it, Marmite — that curious, yeasty brown food spread — is a British tradition.Sso much so that British Airways launched a travel-friendly sized jar of the stuff onboard for all passenger. (Word on the street is that full-sized jars are the most confiscated food item at airport security, so these come in handy.) Travelers in First can enjoy British provenance, pinkies up, with afternoon high tea service including scones and clotted cream served on elegant bone china crockery, while short-haul economy passengers with a sweet tooth can nosh on mini Jaffa cakes (sponge cake, Jaffa orange jam and chocolate) and Giant Buttons, sort of a British take on M&M's.

This carrier’s highly touted “Austrianness” is brought to life through its F&B, which include sweets like nut-filled nussschnecken pastries and Linzer torte, a type of shortcake topped with fruit preserves and nuts — which you can wash down with Almdudler (say that five times fast), the unofficial soda of Austria. If you’re traveling in business class, come hungry: Hearty traditional dishes like schnitzel and St. Martin's Day goose are as big as you’d find on the ground. When you’re finished, enjoy an after-dinner kaffe; you can choose from 10 offerings — like frothy cappuccino or dessert-like wiener eiskaffee with ice cream and whipped cream — from this coffee house in the clouds.

Its Flying Chefs program, which employs some 600 chefs preparing gourmet dishes on board for business class passengers on long-haul flights, has made this carrier famous for its meals —which can be served by candlelight upon request. Don’t overlook the snacks, however: They, too, will give you glimpse of Turkish culture, focused heavily on Turkish mezze like olive oil-based hummus and baba ghanoush (never was following a Mediterranean diet so easy — and tasty). Before deplaning, every passenger is given Turkish baklava — i.e., a bite-sized taste of heaven. (Sadly, it’s baked on the ground, not on board, so you miss out on the aroma of honey and toasted nuts.)

Chicago-based chef David Posey of Elske partnered with Finnair to help expand its Nordic-inspired menu, shaking things up by incorporating more classic and simple Scandinavian ingredients. But one thing that’s not changing? Finnair’s signature items like blueberry juice (a staple fruit in the Nordic diet) served onboard in fancy crystal glasses, as well as its traditional Rye bread sandwiches. To showcase Finland’s stellar pastries, the airline also serves Karelian pies, an ancient treat filled with munavoi (hard-boiled eggs and butter) for breakfast in business class. Karl Fazer Finnish chocolate is a delightful for-purchase treat to end things on a sweet note.

The team behind this intercontinental airline likes to say they have “Belgitude” that brings the world to Belgium, and Belgium to the world. They do a superior job of this, offering eight Belgian brews on board in its bar for long-haul flights (two of them, Jupiler and Leffe Blonde, are available to economy flyers), crispy-sweet Belgian waffles and authentic oven-fried Belgian fries (a rarity in the air). Business class flyers are served indulgent Belgian pralines, which Neuhaus Master Chocolatier also crafts on the spot in The Loft airport lounge at the Brussels airport.

If you recall one thing about flying aboard Swiss, it would likely be the complimentary mini chocolate bars. If you’re extra nice, perhaps you convinced the flight attendant to give you a handful, because they’re that melt-in-your-mouth delicious. The airline reportedly hands out 45,000 bars a day! While you’ll have to bring your own snacks if you require something more substantial than the included chocolate and water on short-haul flights, long-haul routes have meals and better localized options, like a sampling of Swiss cheeses (think Gruyere, Appenzeller and Tête de Moine).

You’ll likely be enjoying many Italian classic cocktails, like Aperol Spritz, when you touch down in Italy, so you can get a head start by sipping on one available through all-day dining on board Alitalia flights. When it comes to snacks, this Italian carrier does things right with perfectly portioned cubes of Italian cheeses, such as Fontina and Trentingrana, plus a pretzel sandwich made with venison salami and quince jam. And while drinking coffee on a plane is a little iffy, the airline’s new Lavazza instant brew is apparently delicious.

These days, you can pick up an assortment of flavors of the Australian cult-favorite Tim Tam chocolate biscuits at boutique markets throughout the U.S. — but it’s much more fun to snack on them from the self-serve section aboard a Qantas flight when you’re actually on your way Down Under. For a pre-landing breakfast, you can get acquainted with an Aussie favorite breakfast item, muesli (a healthy mix of oats, dried fruit and nuts), sourced from local Brookfarm in New South Wales.