Return to normalcy: All of the airline lounges in the US that are currently open 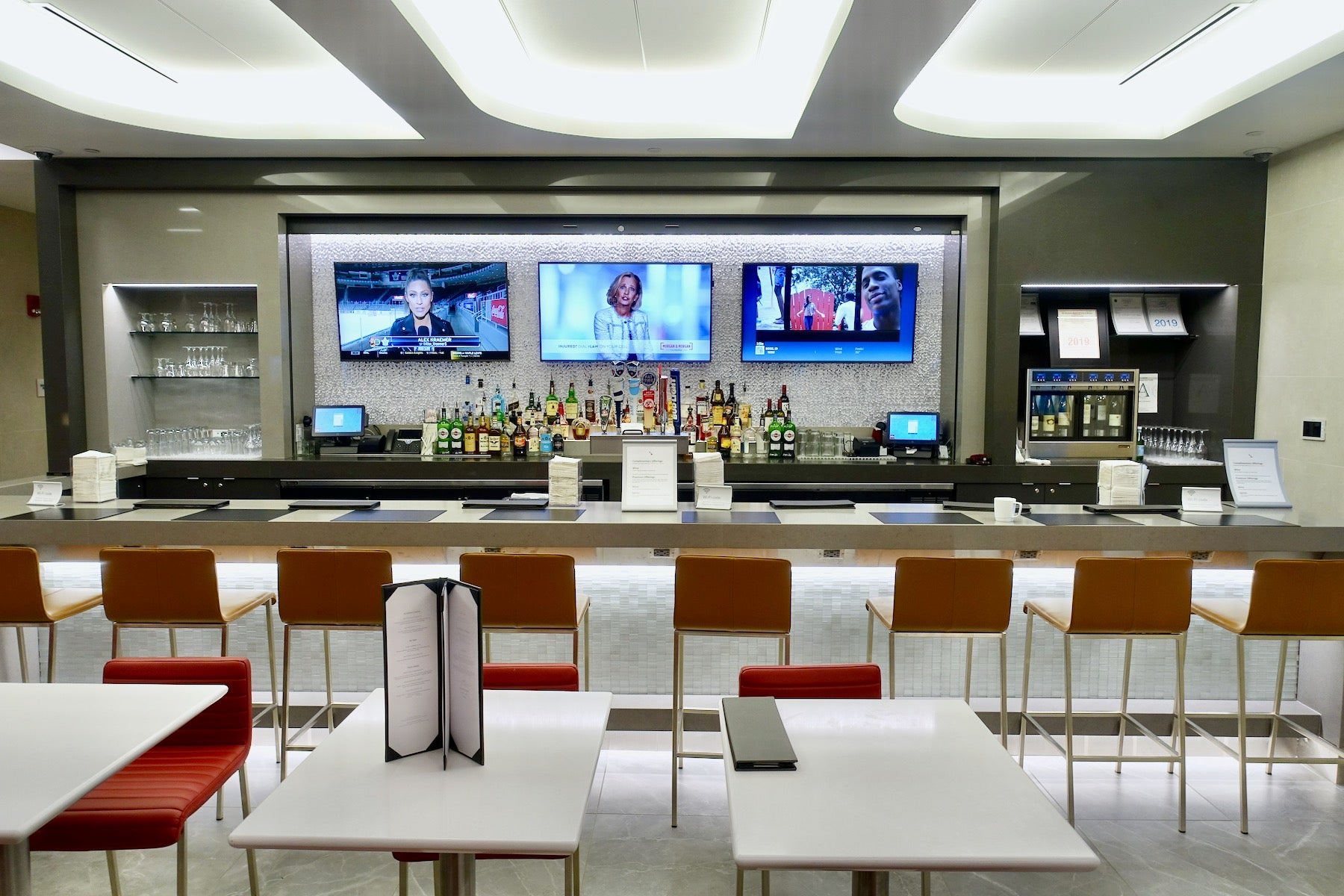 Editor’s note: This is a recurring post, regularly updated with new information on lounge reopenings.

People are returning to the skies as lockdowns ease and vaccination rates tick upward. Still, the actual flying experience looks quite different, with airlines reducing and redesigning service flow to minimize passenger and crew interactions and reduce touch points.

Even on the ground, air travel may seem unfamiliar, as some airline lounges remain closed due to a combination of low demand and social distancing requirements. Meanwhile, for the lounges that are open, things may not be business as usual. For instance, many lounges are still offering just prepackaged food and drink instead of their usual buffets and self-serve bars. That said, things are slowly returning to normalcy, at least domestically.

If you’re flying soon, here’s what you need to know about which lounges are currently open.

Let’s start by taking a look at the North American airlines that account for most of the travel to, from and within the U.S. You’ll notice a few airlines missing from this list, such as Southwest and JetBlue, because they don’t operate lounges.

American Airlines offers three tiers of lounge experiences for its premium and elite passengers, including the more basic and prevalent Admirals Club, Flagship lounges in major international gateways and Flagship First dining facilities at a smaller number of key hubs.

After being closed for nearly 18 months, American just reopened its New York-JFK Flagship Lounge and Flagship First dining facility in mid-September. It will reopen its Miami (MIA) Flagship Lounge on Sept. 28, followed by the airline’s three other outposts — Chicago (ORD), Dallas-Fort Worth (DFW) and Los Angeles (LAX) — later throughout fall 2021.

Meanwhile, American has reopened all of its domestic Admirals Club, as well as some international ones:

There’s no word yet when the remaining international Admirals Club locations will open.

Once inside a club, you can expect complimentary hot food; signature dishes for sale; self-serve snacks; disposable, single-use glassware; a full-service bar; touchless menus with signage and QR codes; foot-operated door openers; hand sanitizer stations; and glass shields at service desks. Additionally, Admirals Clubs are once again serving avocado toast in the mornings and guacamole and chips in the afternoons. A face covering is required while you’re in the club, but you can remove it to eat or drink.

Related: 3 reasons why this is the best card for Admirals Club lounge access when travel returns

American recently began selling premium wines and Champagne by the bottle in select cities. Alternatively, customers are now able to sample wine flights, ranging from $11 to $13.

Related: Here’s what food and drinks you can expect on your next flight

Despite offering the best business-class product in the U.S. (for now, at least), Delta only has one type of lounge. This means you’ll find yourself in a Sky Club whether you’re traveling in international business class, have Delta elite status or gain entry through some popular credit cards.

As of the end of June, all Sky Club locations have reopened, including the following:

Just note that shower facilities remain closed and you must wear a mask during your visit, except while eating or drinking.

Delta requires all travelers entering a Sky Club to wear a face mask, or appropriate face covering, over their nose and mouth. Food is grab-and-go style and full bar service is available.

Related: The best Delta Sky Club lounges in the US

United offers Polaris lounges for its premium long-haul international passengers and United Clubs for domestic travelers with a membership, upper-level elite status or an eligible cobranded card. United has temporarily closed all its Polaris lounges, but has reopened the following United Club locations:

All customers are required to wear a face covering except when eating and drinking. Clubs are serving prepackaged snacks, including some fresh food options, and are offering full bar service.

Alaska Airlines offers a rather extensive lounge network for a primarily domestic and short-haul airline.

All locations have reopened:

Related: Here’s why Alaska Airlines miles are the most valuable

Air Canada initially took a more extreme step than its counterparts south of the border, closing all lounges worldwide. This includes all Maple Leaf lounges, as well as its relatively new Signature Suite lounges in Toronto and Vancouver.

Meals can be ordered and delivered straight to your table through the new “Maple Leaf Lounge @ la table” service simply by scanning an NFC or QR code found at the table. Visitors can also select from two cold meal options, prepackaged and sealed in a snack bag. There’s also an assisted bar service with a full bar offering.

Related: Review of Air Canada’s 787 in Business Class From Shanghai to Montreal

Back in March, American Express closed all Centurion lounges worldwide. However, all U.S. locations, including multiple brand-new ones, have reopened since then.

The following U.S. lounges are currently welcoming eligible cardmembers with The Platinum Card® from American Express or Centurion-branded cards:

All lounges are operating under Amex’s new “Centurion Lounge Commitment” to ensure the health and safety of flyers and staff. It includes socially distant seating, reduced capacity, increased frequency of cleanings, hand sanitizer stations and more. The bar will be open with a full wine list, but the cocktail menus are abridged. Masks will be required to enter the lounge and can only be removed when eating or drinking.

The Club operates 24 lounges across the U.S. and U.K. with complimentary access to most locations for travelers with a Priority Pass membership. The following U.S. locations are open:

There are several other Priority Pass lounges that have reopened as well, including the Wingtips lounges at JFK and STL and Minute Suites locations.

Of the 11 U.S. locations, here are the Escape Lounges currently open:

You can gain complimentary access to these lounges with the Amex Platinum Card or The Business Platinum Card® from American Express. Enrollment required.

While many airlines are taking the blanket approach of closing all lounges, some have chosen to keep one or two open, primarily in their home airports or key international hubs. Nearly every foreign airline lounge in the U.S. is closed, including all locations operated by Cathay Pacific, Virgin Atlantic, Korean Air, Emirates, Qantas and more. There are, however, a handful of international lounges operating in the U.S. again, albeit with reduced hours or reduced service offerings, including:

Note that some of these lounges are part of the Priority Pass network, but access may be restricted to members due to capacity limits.

Premium-cabin passengers with a Priority Pass membership used to have multiple lounges to choose from, especially at major airports such as New York-JFK and Los Angeles International. Unfortunately, due to the coronavirus pandemic, a number of airport lounges around the world remain closed, and those that remain open offer a different experience from what customers might be used to. That said, as travel picks up again, many lounges are reopening.

Related stories
Alaska Airlines debuts digital bag tags that don't come cheap
Bask Bank raises the mileage earning rate on its AAdvantage savings account — what you need to know
Use these Amex Offers to save up to $60 on your next Delta flight
Targeted Premier 1K members eligible for bonus miles when checking in and checking a bag on the United app
Featured image by (Photo by Benji Stawski/The Points Guy)
Editorial disclaimer: Opinions expressed here are the author’s alone, not those of any bank, credit card issuer, airline or hotel chain, and have not been reviewed, approved or otherwise endorsed by any of these entities.

Our points-obsessed staff uses a plethora of credit cards on a daily basis. If anyone on our team wouldn’t recommend it to a friend or a family member, we wouldn’t recommend it on The Points Guy either. Our opinions are our own, and have not been reviewed, approved, or endorsed by our advertising partners.
See all best card offers
Related stories
News
Alaska Airlines debuts digital bag tags that don't come cheap
News
Bask Bank raises the mileage earning rate on its AAdvantage savings account — what you need to know
News
Use these Amex Offers to save up to $60 on your next Delta flight
News
Targeted Premier 1K members eligible for bonus miles when checking in and checking a bag on the United app