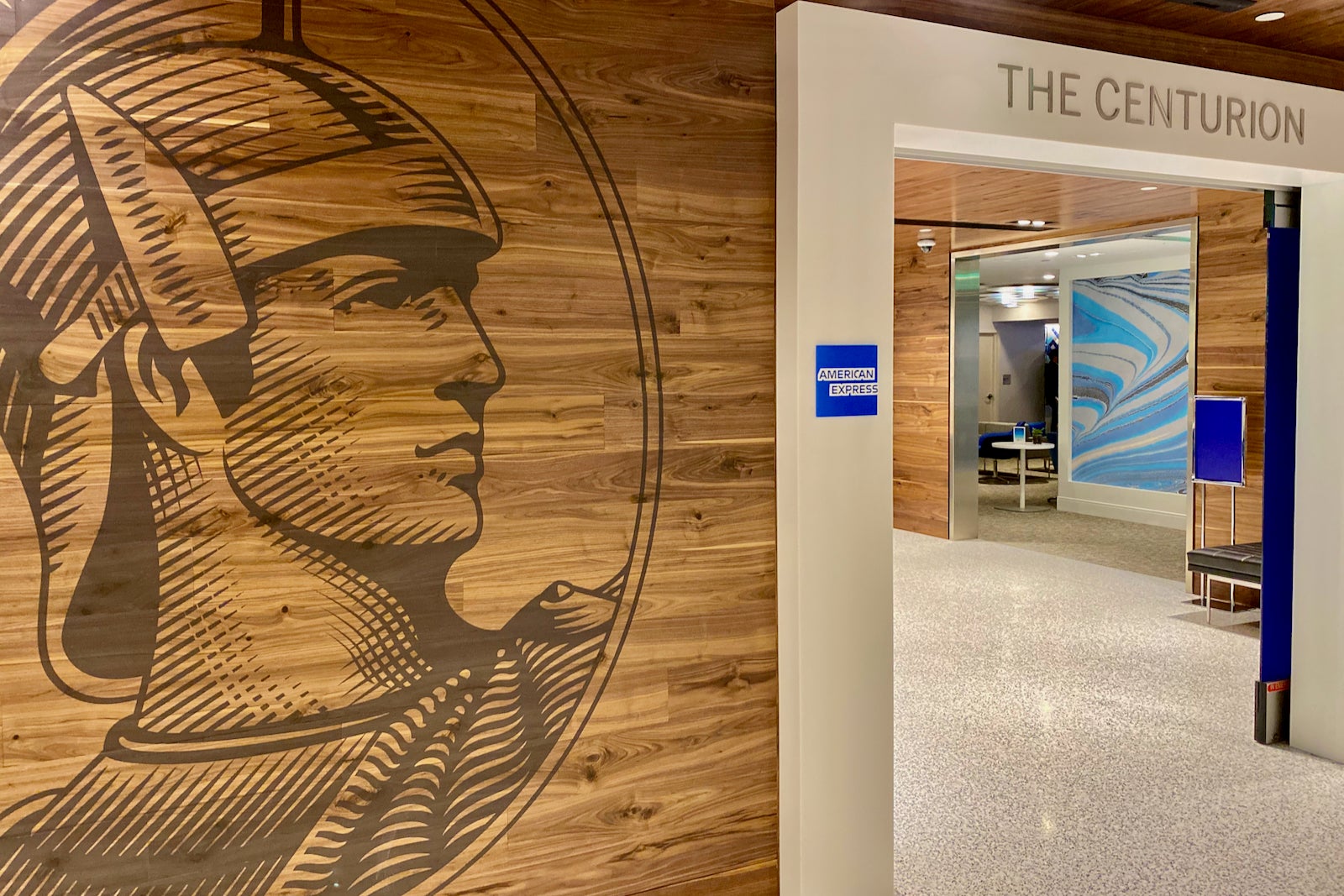 American Express is on a roll with its Centurion Lounge network. Having just opened the Charlotte location two weeks ago and the Phoenix outpost in January, 2020 has been an exciting year for Platinum cardmembers.

And now, Amex has announced that its newest lounge in Los Angeles will open on Monday, March 9. At 13,900 square feet and with a capacity for 530 guests, it’s the largest Centurion Lounge to date and a welcome addition to the world's fourth-busiest airport.

But I’m not just excited about the rapid pace at which Amex is opening new lounges. (After LAX, there will still be three more openings this year: Denver, London and New York-JFK). It’s also the design that keeps getting nicer and more sophisticated.

I got a first look at the Centurion Lounge in LAX at a preview event, and I'm impressed. Read on for why you should be excited too.

The lounge is open daily from 6:30 a.m. to 11 p.m. For starters, you need to have The Platinum Card® from American Express ($695 annual fee. See rates & fees), The Business Platinum Card® from American Express or The Centurion® Card to access the Centurion Lounge. Visitors are entitled to bring two guests (or immediate family, if you carry a Centurion card), and lap infants don’t count against the two-guest allotment.

The information for the Centurion Card has been collected independently by The Points Guy. The card details on this page have not been reviewed or provided by the card issuer.

Related: Which card is right for you? Amex Platinum vs. Amex Business Platinum

Cardmembers with other flavors of the Platinum Card, such as the Schwab, Ameriprise or international versions, also have access. Authorized users with a Centurion or Platinum Card can also enter — you can add up to three authorized users to the personal Platinum Card for a total of $175 per year (see rates and fees) — but those who have the Platinum’s complimentary additional Gold Card don’t have access. This is the best strategy if you need to get a family larger than three in the Centurion Lounge.

Related: How to get a family of 4 or more into an Amex Centurion Lounge

Note that Platinum cardmembers can only access Centurion lounges up to three hours before a departing flight. Platinum members also get access when connecting through the airport, but won’t get access without an onward boarding pass.

Delta SkyMiles® Reserve American Express Card cardholders receive complimentary access to the Centurion Lounge when flying Delta with a ticket purchased on any American Express card issued in the U.S. You’ll be able to bring up to two guests for a fee of $50 each.

RELATED: Why you should get the Amex Platinum

If you’re got the right card, then you’re welcome to visit any Centurion Lounge subject to a few access rules.

The Los Angeles lounge is located in the Tom Bradley International Terminal (TBIT) at LAX. As such, it’s accessible to those traveling from Terminals 2–8 without needing to re-clear security.

The entrance to the lounge is on the fourth level of the terminal. There are two welcome doors — one past security and the other just down the escalator from the bridge that connects Terminal 4 and TBIT.

Once you pass through one of the doors, you’ll take an elevator down to the second level, where you’ll be greeted by the reception area decked out in familiar Amex branding.

This lounge will participate in the mobile check-in feature, so there shouldn’t be too much of a wait to enter.

After passing through the reception vestibule, a custom mural created by Los Angeles-based muralist Ellierex greets you. The relaxing blue tones of the mural evoke a sense of calm and stillness amid the otherwise bustling airport.

From there, you can either go left or right. If you walk left, you’ll find yourself in a small relaxation area with some chairs and a poster of the company’s watchdog logo.

Behind this room is another relaxation area with similar furnishings as the Charlotte location. The zig-zag seating arrangement gives cardmembers additional privacy in an otherwise open space.

Adjacent to this seating area is a beautifully decorated beer and wine bar. The teal shades here were inspired by the design trends of the local Arts District. There’s a high-top table with multiple seats and a refreshment center here too.

The next area of the lounge is dedicated to travelers looking to get some work done. Here you'll find an eight-seat conference table, as well as four open workstations and some freestanding chairs.

Along the wall are five private workspaces, which Amex describes as “noise-buffering.” Time will tell how quiet they really are, but they sure are well-appointed.

Further down the hallway is a multipurpose family room and Exhale spa, followed by two new wellness areas dubbed the sunrise and moonrise rooms.

When Amex first announced this lounge, it promised a first-of-its-kind “tranquility area.” And that’s exactly what these rooms are designed for.

The sunrise room has brightly illuminated walls, which help create a feeling of being outside during dawn. I can imagine this will be an ideal place to relax after a red-eye flight. There are a few seats built into the wall, as well as some freestanding recliners, each with a table.

If you’ve been traveling all day and are having trouble sleeping, then it’s best to enter the moonrise room. As you’d expect, this room’s almost completely dark, ushering in a sense of nighttime relaxation. The starry night ceiling certainly helped calm me down after a long day in the skies.

Together with these special rooms and the spa, it’s clear that Amex went all-in on promoting wellness in the LAX lounge.

As you walk back to the mural by the entrance, you’ll end up at the standalone buffet.

If you make a left after the buffet, you’ll pass another refreshment station followed by a cafe area, which is decked out with bright lights and plant wallpaper. There’s a bunch of tables and couches here, and I expect this area to act as overflow seating during the lounge’s busiest hours.

Like the wellness spaces, the cafe is reminiscent of being outdoors, which is important because the one downside to this lounge is the lack of outside views. In fact, the entire space is interior facing, except for the bar and main dining room, which overlook the halls of TBIT.

Back by the buffet are a few two-top dining tables, along with tons of counter seating lining the lounge’s perimeter. As a solo traveler, I always appreciate when lounges have lots of barstools and single seats.

And this is also where you’ll find the centerpiece of the lounge: the bar. It’s adorned with a neon-lit Centurion mark, which adds a nice touch to the blue backdrop. The vaulted ceilings also help to add a sense of openness to this area.

On the other side of the bar is another dining area with more tables and counter seating. There’s another refreshment center here too.

Behind this is the lounge’s private restrooms, which are on the small side for such a large lounge.

And just as you walk back to the main relaxation area, you’ll find a wall adorned with wood that’s meant to remind you of the Hollywood Hills.

All in all, color me impressed. I thought the lounge was masterfully designed. The expansive layout will also help spread out the myriad cardmembers in the lounge, hopefully reducing overcrowding.

The lounge’s culinary offerings put the Centurion Lounge in contention for the best lounge at LAX.

As with all Centurion Lounges, the menu is curated by a local, renowned chef. In this case, it’s Nancy Silverton, who’s won multiple awards, including the James Beard Foundation Award for Outstanding Chef.

During the media event, there were samples of the dining fare, including farro salad and mozza meatballs (pancetta, beef and pork). Everything I tried was delicious, so I look forward to visiting when the full buffet is fully open.

The drink selection is just as impressive as the food. The cocktail menu is curated by Jim Meehan from Please Don’t Tell in New York City. Wines are picked by renowned sommelier Anthony Giglio.

And don't forget the wine and beer bar. It's a great place to pick up a drink in a more laid-back setting than the full bar.

Just like the Charlotte lounge, there are three refreshment centers spread throughout the space. Each has a Franke coffee machine, as well as Vivreau water dispensers.

I previously crowned the DFW lounge as the amenity king. Well, the brand-new LAX Centurion Lounge gives Dallas a run for its money — especially if you’re looking to relax.

In keeping with the wellness theme, there’s an Exhale spa with some cool new treatments including reiki, hand and nail therapies and chair massages. It'll temporarily be open from 11 a.m. until 7:30 p.m. and then later in the year it'll extend its hours to 9 a.m. - 8 p.m.

You can find the full menu below.

If you’re traveling with kids in tow, you’ll appreciate the multipurpose family room.

Though there’s plenty of public spaces to work, you won’t find any private phone booths or conference rooms in the lounge. It’s clear that Amex instead decided to focus on wellbeing here.

The lounge has two showers, each featuring products from L’Occitane. I’ve got to imagine that the line for the shower will get quite long, especially at such a busy international airport.

Amex nailed the basics by putting power outlets and USB ports at almost every seat. Wi-Fi wasn’t yet operational when I visited, but it should be connected by the time the lounge opens on Monday.

As the largest Amex Centurion Lounge, the Los Angeles location will become the company’s West Coast flagship when it opens on Monday. The space is designed with wellbeing in mind and features some really unique amenities, such as sunrise and moonrise rooms and an Exhale spa.

Coupled with the delicious food and drinks, this beautifully designed space will make you forget that you’re sitting inside one of the busiest airports in the world.

Related stories
The 5 best credit cards for Walmart shopping
Watch out, Royal Caribbean: This cruise line is bringing more big new ships to North America
New offer: Earn up to 80,000 AAdvantage miles with these Citi cards
Delta makes it harder to earn Medallion status in 2024, adds new Choice Benefit options
Editorial disclaimer: Opinions expressed here are the author’s alone, not those of any bank, credit card issuer, airline or hotel chain, and have not been reviewed, approved or otherwise endorsed by any of these entities.