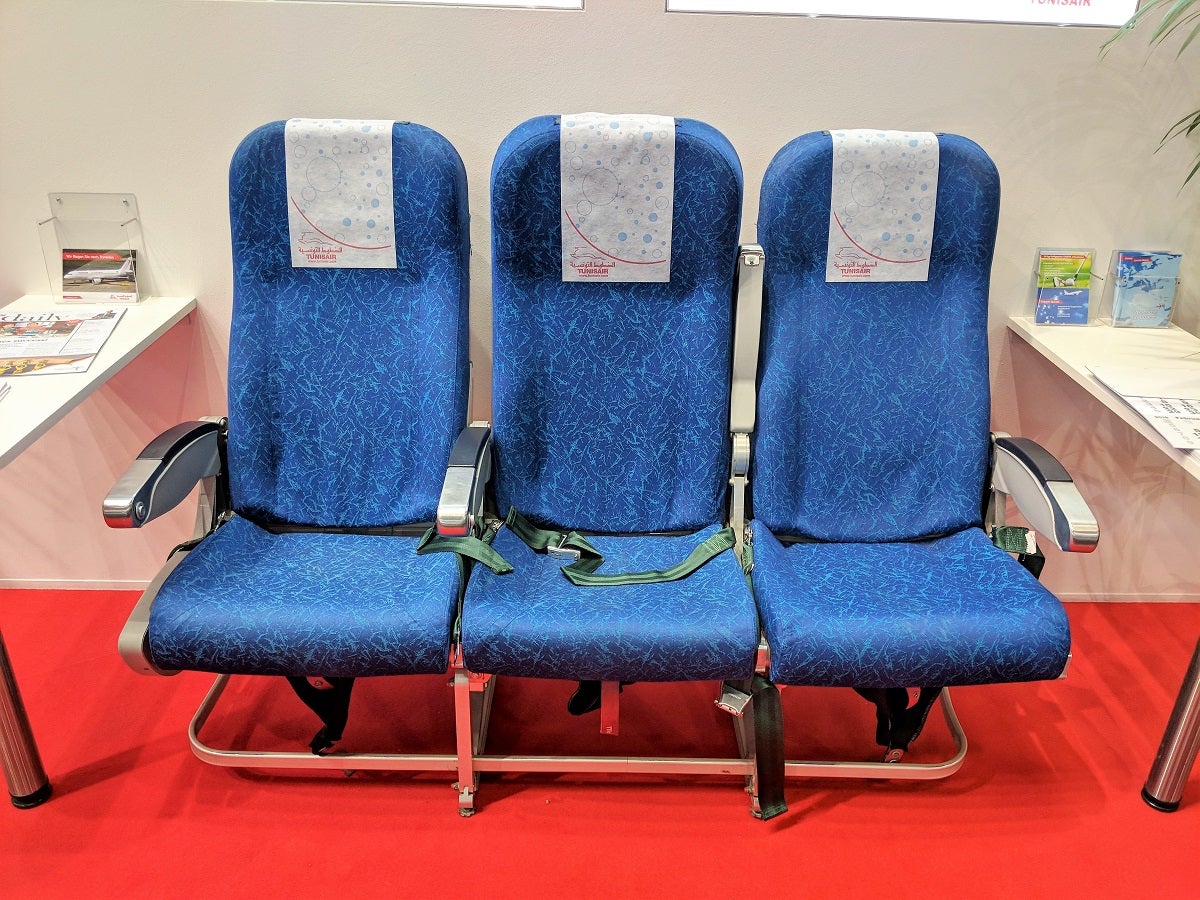 The Best Airplane Seats on Display at the World's Largest Tourism Trade Fair
This post contains references to products from one or more of our advertisers. We may receive compensation when you click on links to those products. Terms apply to the offers listed on this page. For an explanation of our Advertising Policy, visit this page.

ITB Berlin — the self-proclaimed "World's Leading Travel Trade Show" — just finished its third day. After a banner year in 2017, this go round was a bit of a disappointment. Last year featured the unveiling of Qatar's Qsuite and a full-sized model of Emirates' new on-board bar. This year, there were no major unveilings. Also, some key players — such as Emirates and Etihad — had almost no presence. That said, there were some nice products being shown off that visitors could try out for themselves.

After being restricted to just trade folk, the massive Messe Berlin fairgrounds open to the public this weekend with online tickets costing €12 per person, per day. With the absolutely jaw-dropping size of ITB Berlin (1.7 million square feet housing more than 10,000 exhibitors), you might need both Saturday and Sunday to scratch the surface.

Here are the top 10 airline seats featured at ITB Berlin:

In the Lufthansa Group stand, Lufthansa had its premium economy seats on display.

On the floor directly below, Austrian Airlines flight attendants proudly showed off the airline's "new premium economy seats." While they are indeed new to Austrian, the seats are the same as what you'll find on Lufthansa's aircraft. It looks like a decent product, but isn't overly generous on the space, storage or padding.

At first, I was a bit disappointed to only see American Airlines' premium economy seats on display. After all, it has some much more impressive business class seats it could display. However, it made a little more sense when I spoke with some AA reps there:all flights to/from Germany on AA have been retrofit with premium economy. Also, according to the German sales representative, the two aircraft flying there (A330-200 and 777-200 with Zodiac seats) aren't the airline's top business class offerings.

Check out our review of this hard product here:

As far as seat comfort goes, Air New Zealand took top honors at ITB Berlin. Its ultra-padded seats were lovely to sit down in after being on my feet all day at the show. This is definitely a product TPG will need to review on Air New Zealand's route from Los Angeles (LAX) to London (LHR) or Auckland (AKL).

Maybe you've experienced "poor man's business class" — a whole economy row to yourself. But, if that won't cut it, Air New Zealand has a solution: the SkyCouch.

After seeing this early in the show, I brought my wife Katie along for us to try it out for ourselves. While the three-seat row is a little short, the good news is that the legrests held:

Turkish Airlines had an impressive business class product display at ITB Berlin. While the service and food are excellent on-board, the 2-3-2 seating arrangement on the 777 certainly means it's a lacking hard product.

Turkish also had its economy product on display. It's in my top five economy class products, but the seats aren't actually installed with 38 inches of pitch like they were at ITB Berlin:

Check out our review of Turkish business class here:

The representative at the show misstated that this seat won't start flying until June 2018; it's actually flying now. (She was getting it confused with the launch of TAP Portugal's new Airbus A330-900neo.) Having tested it out myself, it doesn't seem like a bad product. However, the business class cabin is arranged with staggered seating, creating winners ("throne seats" like the one on display) and losers (two seats which occupy the same space) in alternating rows.

Some may disagree with Lufthansa business class being ranked this high, but I have a soft spot for the product after experiencing it myself last year on the upper deck of the 747-8. Major downsides of this seat are the lack of privacy (if you have a neighbor you don't know) and lack of all-aisle access.

And no, you're not seeing double. Eurowings new A340 business class product is the exact same seat as Lufthansa ... as it's actually going to be a former Lufthansa aircraft used for these Eurowings flights.

Check out our review of Lufthansa business class here:

This was my first time seeing Avianca's business class product from its 787 Dreamliner, and it's a solid product. The reverse-herringbone seat has a nice bit of storage in the aisle-side armrest, as well as in a little compartment to the inside. The seat moves in many different directions, including simply straight forward so you can be closer to the tray table or in-flight entertainment screen. A solid product that we at TPG will have to review soon.

The same Qsuite mock-up that made waves when it was unveiled last year was available for touring again this year. Although I spent plenty of time last year filming the seat, it wasn't until just this week that I tried it out for myself. And, I can understand the buzz. The window seats are great for solo travel, and Katie and I got to try out the "double bed" in the middle seats. Now, we need to plan a trip to actually fly this product!

SunExpress certainly wins the most entertaining airline stand award. From full-swing golf simulators to model airplanes driven around via remote-control to Playstation consoles, SunExpress' stand was a crowd favorite during the trade show. But my favorite part were the beach chairs set up on top of real sand brought into the exhibition hall for the show. As a fun touch, the airline added seatbelts to the beach chairs: