TPG vs. Mount Agung: A Review of the W Bali Seminyak 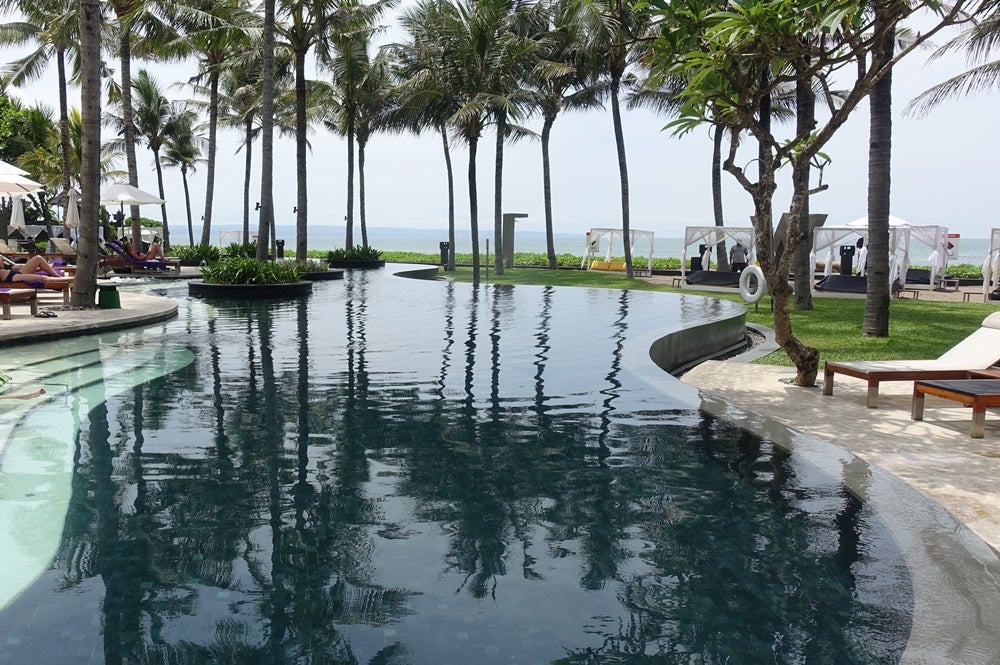 My stay at the W Bali Seminyak wasn't part of my original travel plans. I had been staying at the Ritz-Carlton Bali, and my next stop was East Timor for a PeaceJam conference, but Mother Nature decided that wasn't going to happen. The Mount Agung volcano was erupting, so when I arrived at the Denpasar’s Ngurah Rai International Airport (DPS), I found it closed and all flights canceled because of the ash. Although I was disappointed to have missed my PeaceJam conference, there are worse things that could have happened than being stranded in Bali.

While I could have stayed on at the Ritz, I thought it would be better to be closer to the airport to head there if it reopened. Plus, it was more convenient to be closer to the restaurants, nightlife and activities in the case we'd be stuck there for awhile, so I I quickly booked my parents, a fellow TPG employee and myself rooms at the W Bali Seminyak.

As the booking was last-minute and there was a natural disaster happening, my primary concern wasn't rates — we just need a place to stay, and fast. I was a little worried that with so many tourists displaced, there wouldn't be enough hotel rooms to go around, but I was easily able to get all three reservations at the W Bali for that night. I ended up booking myself a Marvelous One-Bedroom Villa (I wanted to compare this to the villa I had stayed in at the W Koh Samui last April) and booked two Spectacular Ocean-Facing Rooms for everyone else. My villa cost approximately $450, and the ocean-view rooms were about $360 each. Award-night stays started at 30,000 points per night for a Wonderful Garden View room. I couldn't seem to any online availability for any higher category rooms online using points, but when I called, the W said it would cost 97,500 SPG points per night for an Spectacular Ocean-Facing Room. No thanks on that -- I'll drop the $350 instead!

I paid for the rooms using my SPG Amex, earning me 2X the Starwood points for SPG stays.

Unlike at the Ritz-Carlton Bali, this property was much closer to all the action. It was in Seminyak, about a 30-minute drive from the airport. The hotel was right by the beach and about an hour from Ubud by car. Unfortunately, I didn't get to explore the area as much as I would've liked for two reasons: One, it started pouring down rain the moment we arrived, and two, as the volcano situation was predicted to be more dire than we originally thought, we spent most of our time trying to figure out how to get off the island instead of exploring it.

We got to the hotel after trying to assess the situation at the airport. When arrived at noon, our rooms weren't ready, so we explored the property and then I headed to the spa, which I'll explain more on later. The staff was nice enough, but not as helpful as the staff at the Ritz, though they may have been on edge with the volcano situation, which of course affected locals as well as tourists.

The lobby, which reminded me of the W Koh Samui, was open and spacious, with cool wall art by Alec Monopoly.

This was the second time I'd booked a villa at a W property in Southeast Asia and found that the square footage included the outdoor space. (It also happened at the W Koh Samui in Thailand.) The villa, which was supposed to be about 2,500 square feet, seemed small, but the lush outdoor area and pool seemed massive. Southeast Asia is really the only spot I've booked W villas with outdoor space, so I'm curious to know if this is something that happens around the world at other W properties: Please share!

The villa, which I'll grumble about being smaller than I imagined one last time, came with a large, comfortable king bed, a 40-inch flat-screen TV, a minibar, safe and a Bose sound system with iPod docking station.

There was also a sofa, table and funky beanbag-like chair. A small workspace was behind the bed and consisted a desk and chair.

During the day, the room was luminous, but in typical W fashion, once evening rolled around, the lights were dimmer than I would've liked. On the plus side, there were cool macarons with Balinese-influenced flavors waiting for me in the room.

The spacious bathroom and had a huge bathtub and a separate rainfall shower (TPG shower-test approved for tall people).

There was a wash area with sinks and the typical Bliss amenities, and a separate toilet stall. The sink area had robes and ottomans for you to sit on while you primped in front of the mirror.

It was a shame it was pouring rain, because the outdoor part of the villa (the part that took up all the square footage) was spectacular. The plunge pool was private, and there were daybeds and a cool outdoor couch. Unfortunately, even when it wasn't raining, the volcanic ash in the air made it uncomfortable outside, so I didn't spend any time lounging or swimming.

The rest of my party stayed in the main part of the hotel in rooms with small balconies and sea views.

They were really happy with their rooms and I almost wished I had booked one of them, since I wasn't using my outdoor space anyway. But when loud party animals coming back through the hallways at 3:00am disrupted their sleep, I was glad to have my villa, which was set off much further into the property. In fact, the villa was so far removed that I needed to take advantage of the hotel's golf-cart shuttle to get to and from the main property.

The ocean-view rooms also each had a couch and table.

Each room had a spacious bathroom with double sinks and large soaking tub with rainfall shower.

Although we were relatively close to Seminyak, we didn't have the chance to get out as much as I would have liked because of the ash situation. We ended up eating at the property a few times. I sampled food and cocktails at three of the eight bars and restaurants the W Bali offers.

All of the bars and restaurants had chic decor, and many featured an outdoor aspect, like being partly open or boasting ocean views.

I ate at Fire and Ice Bar and had a cocktail at the W Lounge. Everything I tried was delicious, but I particularly enjoyed the fish tacos and the sushi (not at the same time though).

I was a little disappointed with the staff at the W. I'm sure they were overwhelmed with the volcano situation, and as a result, there was always a long line of people waiting to speak with them so it was difficult to find a staff member to speak with. In the end, I found a way off the island with the assistance of the Amex concierge, Ray, who provided excellent service and help during this stressful situation.

The first morning I woke up, though, I found a "volcano kit" outside my door. Maybe the staff was working so diligently on the kits that they didn't have time to assist guests with anything else? The kit contained two bottles of water, two filtered dust masks to wear outside and two surgical masks to wear inside.

There was also a note explaining what was happening and how to use the items in the kit.

I have never dealt with a more complicated last minute travel situation. Normally it’s a breeze redeeming miles last minute, but getting out of Bali with a moody volcano spewing ash, airports that open and close at a whim, shady boat companies, overridden ferry terminals.. I am being pushed to the brink! @flyblade come save me plz? Art via @alecmonopoly

While waiting to check in, I enjoyed a relaxing facial, manicure and pedicure ($170 in total) at the AWAY spa from the 'What Men Want' special male spa menu. All the services were excellent and the spa was beautiful, with dark, tranquil treatment rooms and views of the tropical foliage outside. The spa is open 24 hours and there are special discounts for booking evening and night spa treatments, though I went earlier in the day.

The nail salon (part of the AWAY Spa) was clean and comfortable, though a little feminine.

The FIT workout center was open 24-hours and came equipped with weights, cross training equipment and machines. The WET pool was large and curved, with a stand serving fresh coconuts. The pool had all sorts of colorful seating options, some directly in the pool, which looked fun.

There was a private beach area with cabanas and day beds. As usual with W hotels, the pool scene was cool, and it seemed like the guests were more concerned with working on their tans than not breathing in the volcanic ash.

My unexpected stay at the W Bali was fine, but nothing out of this world. While the property is trendy and fun, I was too concerned with trying to figure out how to get off the island to really live it up. As a consequence, I didn't have much time to take advantage of amenities like the pool and beach.

The stay made me realize I'm starting to outgrow W hotels. They're too dark and, frankly, too trendy! I need quiet rooms and well-lit spaces, so I think I'll slowly start to spend my SPG points at other hotels, like design hotels and St. Regis properties. If you're young and looking for a sexy and fun environment, however, this would certainly be an enjoyable place to spend your time in Bali — sans volcanic eruption, of course.