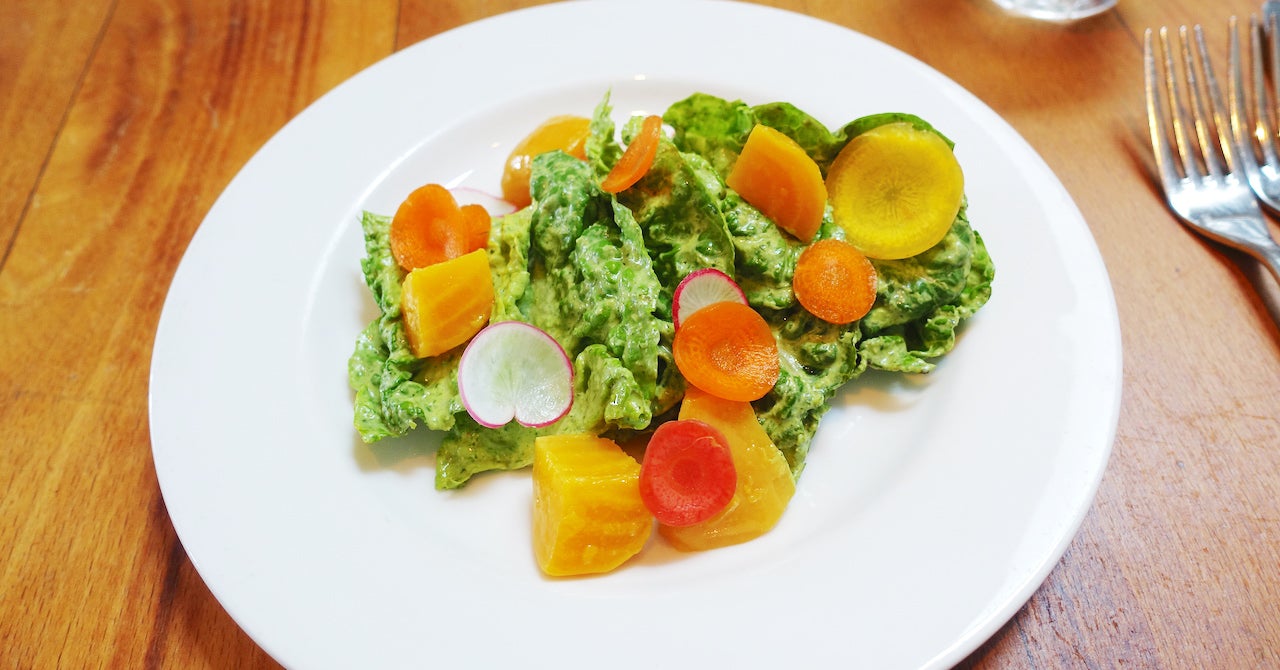 LA Chef Duo Shows off New Menus for Delta's Flights to Sydney
This post contains references to products from one or more of our advertisers. We may receive compensation when you click on links to those products. Terms apply to the offers listed on this page. For an explanation of our Advertising Policy, visit this page.

The pair joined an illustrious roster of chef and restaurant partnerships the airline has forged over the years, including ongoing ones with Danny Meyer’s Union Square Hospitality Group, Atlanta-based Linton Hopkins and Japanese chef Masatoshi Ishimoto, among others.

Shook and Dotolo’s first menus took flight in December. Some of their signature dishes flyers can now find on Delta’s transcons include meatballs braised in marinara with burrata, chicken piccata and strawberry bread pudding. All served on bespoke Alessi serviceware, of course.

Taking the partnership another step forward, Delta announced that the two chefs will create its Delta One menus for flights from Los Angeles to Sydney (SYD), too. Like Shook and Dotolo’s transcontinental dishes, these meals will be produced in their catering facility, Caramelized Productions, which is located near LAX.

Delta invited media into Animal for a tasting preview of the new menus on Monday, February 26 — here’s what I tasted.

And skewers of grilled shrimp with Cajun-spice remoulade.

The sit-down portion of the meal began shortly afterward with a few remarks from Jon Shook. He shared a few behind-the-scenes challenges he and Dotolo encountered while creating the menus for Delta, including the fact that food served on the airplane has to be less than two inches high and that there are no operable airplane test ovens on the ground since they are incorporated into the aircraft’s power system.

He went on to say that “This partnership required [them] to think outside the box, but not in terms of ingredients. [They] credit a huge part of [their] success to [their] ingredients and the people who produce them.”

In fact, two of those producers were actually at the lunch. Peter Schaner of Schaner Farms talked about how vital working with chefs like Shook and Dotolo was to the success of his family farm. He grows many of the herbs they use, including garlic, onions and shallots. “Flying is an experience. So is eating,” he said. “To incorporate them both on a wholesome, healthful level is both delicious and important.”

Michael McConnell was there representing his family-owned Santa Barbara Dairy, which will mark its 70th anniversary next year. He emphasized that his business relationship with Shook and Dotolo, and by association with Delta, is an example of the positive impact large companies like Delta can have in supporting small businesses like his own.

Next, Dotolo took the mic to demonstrate how he makes their green goddess salad dressing using about a dozen herbs in an industrial-strength food processor. He said the dressing, a California invention, was one example of “How [they] can be local and serve iconically Californian food while staying true to both [their] brands and creating a consistent food experience on Delta.”

The main meal was created and served almost identically to how passengers would experience the food on the plane (substituting the restaurant’s ovens for those on the plane). The meals had been prepared in the Caramelized Productions catering facility the day before and then were frozen and transported to Animal, where they were reheated and plated for our lunch.

Service began with a salad of gem lettuce, radishes, golden beets and heirloom carrots, all grown by Garden Of Farms. It was tossed in green goddess dressing and had that signature hint of anise flavor from the tarragon. The veggies were crisp and ripe. Shook told me that he loves using gem lettuce specifically because it maintains its crunch and freshness throughout processing and in the airplane environment.

The main course included a choice of chicken or beef. The chicken breast was served with a roasted tomato, asparagus and warm bacon vinaigrette. It was savory but not overly salty.

The other dish was braised flank steak with spring onions, roasted boniato Japanese sweet potatoes, braised gem lettuce and a ratatouille-like sauce that was flavorful and hearty. The steak was lean but tender, and the portion size was just right.

For dessert, we were treated to gooey miso and white chocolate macadamia nut cookies that were a nice balance of sweetness and umami.

They were also scooping McConnell’s ice cream behind the bar. The three flavors were caramel chip, Turkish coffee and Golden State vanilla. That last one will be available on the flights to Sydney along with a few sundae toppings.

The lunch featured an selection of wines chosen by Delta’s Master Sommelier, Andrea Robinson, who oversees the airline’s wine lists both in the air and on the ground. Among other options was a Domaine Thomas-Labaille Sancerre, which was crisp and tropical on the tongue. The Trousseau Overnoy-Crinquand from France’s Jura region was an interesting choice. Somewhat cloudy in appearance, this red was light-bodied and slightly rustic, though it paired nicely with the steak.

Overall, the dishes were delicious, and not just in terms of airplane meals. According to sources at Delta, customer satisfaction with meals has gone through the roof on the flights that Shook and Dotolo are already catering, so hopefully this new addition will continue that trend and will be the first of several international routes the two will be feeding in the future. If only Delta could find a way to incorporate this kind of partnership into its economy catering on a more widespread basis so flyers at the back of the plane could consistently expect high-quality meals such as these.

If you want to taste these dishes for yourself, they will be available on Delta’s flights from LAX to SYD starting March 1. Delta flight 41 departs LAX at 10:00pm and arrives in Sydney at 8:05am two days later, and is operated by a 777-200LR. There is no word yet on whether the menus will be part of the airline’s soon-to-launch pre-ordering program, but stay tuned to TPG for further developments.