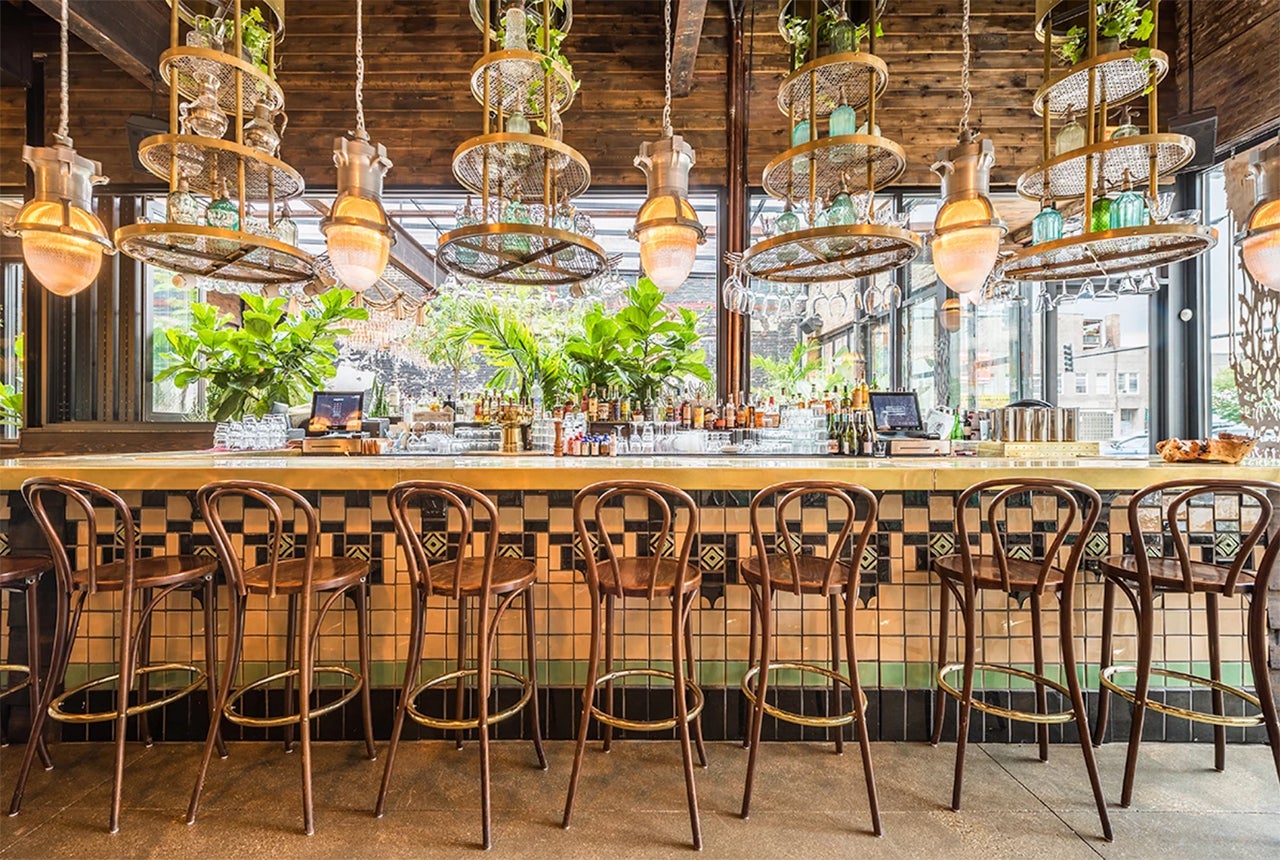 The year might be new, but the global trends of gourmet dining and elevated mixology show no signs of slowing. In fact, 2018 promises to be the best year yet for well-traveled gourmands. Just because a restaurant is world-class, however, doesn’t mean you need jet-setter status to secure a reservation. The hippest trends hitting the scene today lean heavily on accessibility. While Michelin-starred tasting menus will forever have their time and place, today’s hot openings are all about casual elegance. Need proof? Feast your eyes on this list of where to eat and drink now.

The Gist: Occupying the ground floor of a playful new midtown hotel, Ortzi is the brainchild of James Beard Award-winning chef Jose Garces. His Spanish cuisine is driven by influences of the Basque region. The first half of menu is dominated by pintxos, crudos and conservas: small plates ranging from the traditional (beef and pork albondigas), to the imaginative (raw hamachi served with piquillo peppers in a saffron-infused dressing). Out of a wood-fired oven comes heartier fare, including wagyu chuleta, lamb loin and pork ribs. It all pairs wonderfully alongside a lengthy list of Riojas and Tempranillos. Spirit sippers are encouraged to explore a multitude of sherries and Iberian-themed cocktails anchoring the drink menu.

Where: NIMB Hotel/Small Luxury Hotels of the World, Copenhagen

The Gist: The NIMB Hotel has a lot going for it. Modern, luxurious and recently refurbished, the property sits in the heart of Copenhagen, adjacent to one of the city’s primary attractions: Tivoli Gardens. The urban sanctuary already holds a trove of culinary gems, but Gemyse hopes to be its crown jewel. Focusing on eclectically spiced "precision-cooked vegetables," the kitchen utilizes fresh, vibrant ingredients to win over even the most committed of carnivores. The main dining room has a wood-lined interior, evoking a barnyard reimagined in sleek Danish design. It is adjoined by a glassed-in greenhouse, where an aperitif can be sipped under a protective canopy, whetting the appetite for a bounty of organic, sustainably sourced produce to follow.

The Gist: Billed as a mediterranean hybrid, Beatnik is the collaborative effort of Spanish and Iraqi restauranteurs. The menu reflects this dichotomy in an array of plates categorized into either "Mezze" or shareable "Feast" fare. The former is fueled by the likes of halloumi cheese, beet hummus, hickory smoked scallops; the latter boasts Lebanese style lamb and Pluma Iberica — a melt-in-your-mouth preparation of dry-aged pork loin. The dining experience is heightened by a whimsically arranged interior space. Elaborately carved wood furnishings from Bali line one end, a series of antique chandeliers hang from the other. In lesser hands, the concept would feel busy and confusing, here the kitsch is woven with deft into wide-eyed wonderment.

The Gist: Oaxaca is frequently accused of holding on to Mexico’s finest culinary creations. A compelling case can be made at Origen, a courtyard-facing kitchen where chef Rodolfo Castellanos recasts his native dishes in a delectably modern light. Adventurous eaters can explore local delicacies such as flying ant salsa or marinated tripe in the (de)construction of contemporary cuisine. And the drinks here are hardly an afterthought. Advanced mixology is built primarily around mezcal, the region’s shining star. The bar leans heavily on the liquid of Montelobos, a local producer known for its commitment to sustainability. If you’re traveling in a large group (eight or more), reserve your spot at the chef’s table a week in advance.

The Gist: With the worldwide proliferation of osterias, the Italians pioneered the modern concept of fast casual wining and dining. And perhaps no part of the country does it quite like the northern region of Piedmont. From the people that brought you Barolo, white truffles,and Eataly, comes this bustling dining hall attached to the Villa Contessa Rosa, home of Fontanafredda winery. Part pasta shop, part wine bar, this multi-faceted dining destination is a robust assortment of all that Piedmont has to offer — namely ravioli, agnolotti and tagliatelle — paired with the nicest Nebbiolos on the planet.

Where: The Fitzwilliam Hotel, Dublin, Ireland

The Gist: Lofted above the lobby of the stylish Fitzwilliam Hotel, Citron offers more than just elevated real estate — the cuisine itself is next level Irish. Seared seafoods, guinea fowl and spiced duck confit anchor a sturdy menu, notable for its colorful arrangements of flavorful fare. But no dining in Dublin is complete without the drinks, of course. Here you’re treated to a seemingly interminable index of the country’s world-famous whiskey. Opt for a full flight of drams from Tullamore DEW and you’ll taste several well-rounded expressions currently unavailable stateside.

The Gist: Don’t be deterred by the cold weather. Lavish luxury and a private slice of panorama is always in season. Natalie’s — and the Camden Harbour Inn that holds it — serves both, all year long. The only thing you’ll be missing in winter is access to the property’s tranquil outdoor veranda. In the kitchen, however, it’s business as usual, where individual courses are informed daily by available produce. The five-course Maine lobster tasting menu fuses the region’s classical crustacean with ingredients as imaginative as foie gras, miso and garam masala. It’s the freshest, tastiest take on lobster you’re likely to encounter anywhere — ever.

The Gist: If you suppose LA is the land of kale smoothies and avocado toast, Odys + Penelope will quickly force you to reconsider. A shrine to wood-fired proteins of land and sea, the word "grilled" is a constant refrain on the menu. Staples from the brasero include the dry rubbed rotisserie pork, served with cherry mostarda, smoked lamb lettuce cups with hummus and yogurt and just about any meat. The O+P Burger (oak-grilled, of course) with melted cheddar, apple onion jam and Thousand Island dressing is a serious candidate for city’s best. On Mondays, a sprawling happy hour menu runs from 6pm til close.

The Gist: Head down to the West Village for a dining experience quite unlike anything else in Manhattan. A dozen or so patrons crowd around the bar in this cozy basement den, where a series of mysteries are revealed — one course at a time. Rather than choosing your meal, you’re asked to select from a menu of vinyl, as the guests provide the soundtrack for the in-house DJ. Playful dishes range from light snacks to the more savory and substantial. All of it paired with rare sakes, Japanese craft beer and even low-ABV cocktails. The performance concludes in an entirely unexpected dessert encore. Two nightly seatings, two hours in length, book up over a month in advance.

The Gist: Hidden away through the lobby of the Four Seasons Hotel is BA’s latest source for great wine and grilled eats. That most classic of Argentinian combinations come to life in this balconied space — punctuated by a central atrium — surrounding an open kitchen. A dry-age cooler hangs hearty cuts of wagyu, ribeye and strip steaks, patiently awaiting the plancha. Thick slabs of meat, still sizzling, arrive table-side, joined by ramekins of freshly prepared chimichurri. Filing the glass is a laundry list of the country’s viticultural all-stars: Malbec, Torrentés, Bonarda — all available by the glass, paired with expert precision by a team of South American sommeliers.