11 beautiful destinations to visit in Ireland beyond Dublin

Articles
Lori Zaino is a writer for TPG and TPG UK covering travel, news, points and miles and more. She's been based in Madrid, Spain almost 15 years and is an expert in travel throughout destinations such as Europe, Southeast Asia and Africa.
Follow
March 17, 2022
•
10 min read 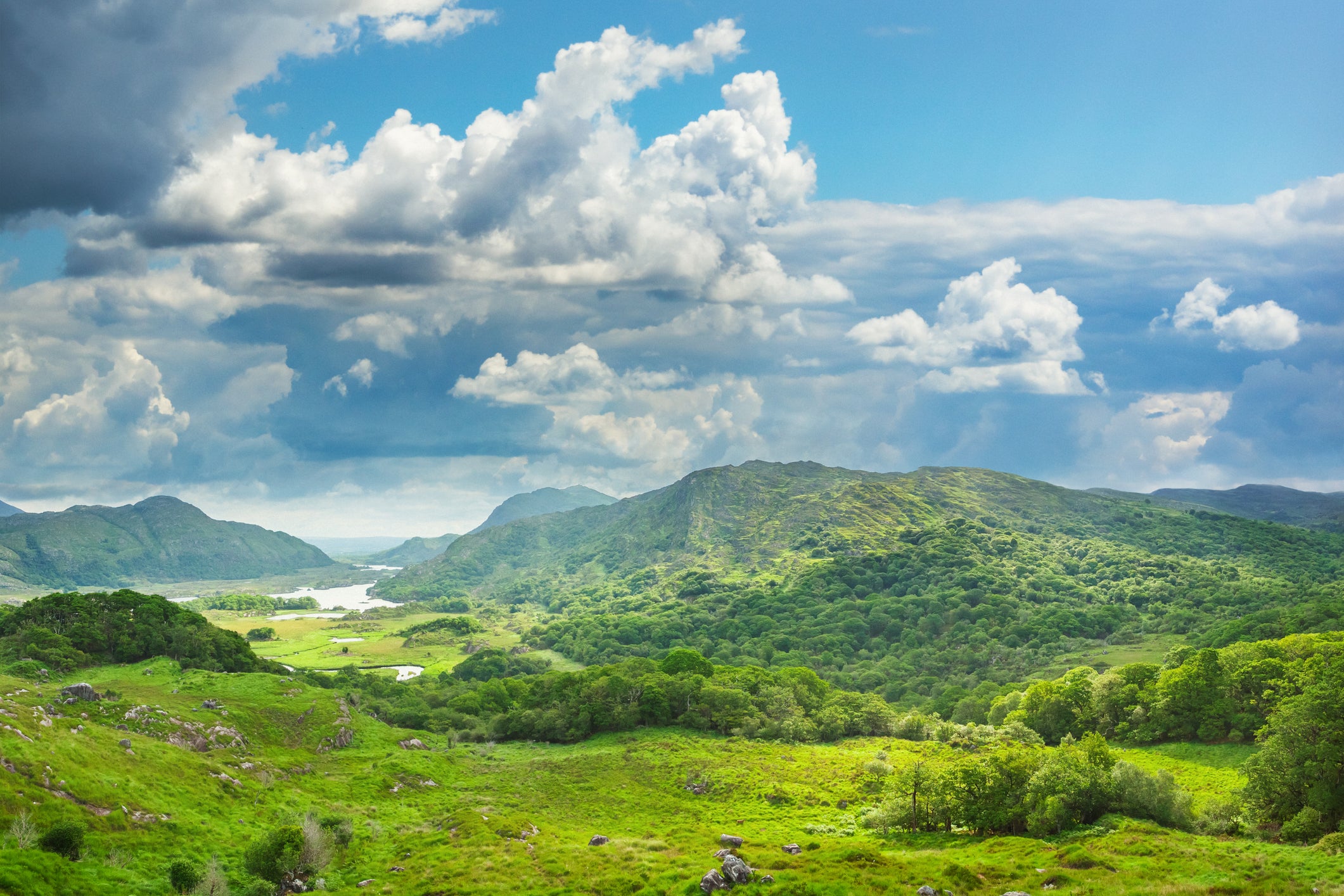 As we celebrate St. Patrick’s Day this week, we’ve got Ireland on the brain. Dublin is an easy and obvious choice for a visit, with short, nonstop flights from the East Coast. However, don't limit yourself to the country's most famous destination. There are so many other incredible spots on the Emerald Isle just waiting to be explored.

These alternative spots aren’t necessarily off the beaten path. The names are familiar and you may have seen them in the Harry Potter films or on Game of Thrones. However, none are major tourist traps — no Blarney Stone, for example.

Here are some of our favorite places outside Dublin, from quiet villages and cliffside beaches to cool castles and delightful foodie spots (yes, Ireland has a food scene well beyond Guinness and pub grub).

Don’t miss TPG’s Ireland hub — it has everything you need to know about visiting this beloved European country.

The three Aran Islands, Inis Mor, Inis Oirr and Inis Meain are traditional Gaelic havens, where the roughly 1,200 locals still speak the language while enjoying the mild climate and lush agriculture (the islands have one of the longest growing seasons in the country).

Less than an hour's ferry ride from Galway City, the Aran Islands are home to many forts and castles dating back to the Bronze and Iron ages. If history is your interest, this is your place.

Related: The best ways to get to Europe using miles and points

Only 15 miles south of Cork, this village is known as one of Ireland's most popular foodie hubs, so head there and start chowing down. Thanks to Kinsale's food festival each year in October, visitors can sample everything from traditional Irish fare and Atlantic seafood specialties to the country's most delicious wine and beer.

Even if you don’t visit during the festival, you can still enjoy Irish and international gastronomy at Kinsale's numerous wine bars, pubs and restaurants. Burn off a delicious lunch by exploring the town’s yacht-filled harbor, walking the charming narrow streets or visiting the many boutiques and art galleries.

You may first feel a modern vibe from this energetic city (it was Europe's Capital of Culture in 2021). The streets are lined with boho-chic bookshops, vintage boutiques and lively pubs, but there’s a long history in its old buildings and many castles. Galway was once inhabited by 14 family tribes who helped it flourish and grow.

Don’t miss St. Nicholas Collegiate Church, one of the largest medieval churches in Ireland. It dates back to 1320 and is still active today. Galway City is also the perfect place to hear traditional Irish music, with many venues offering concerts as well as workshops where beginners can learn the basics.

Keep an eye out for sheep, rabbits, foxes, shrews, bats and Connemara ponies as you take in its picturesque landscape. A visit to Connemara is the perfect day trip from Galway City — it’s only about a 90-minute drive.

The Cliffs of Moher

Rising 400 to 700 feet above the Atlantic, the Cliffs of Moher run for about 5 miles on Ireland’s western coast. If you’re not convinced by the photo below, perhaps some Hollywood glitz will win you over: The cliffs have been used as a backdrop in "Harry Potter and the Half-Blood Prince," "The Princess Bride" ( Vizzini’s Cliffs of Insanity), "Ryan’s Daughter" and "The Guns of Navarone."

Birdwatchers and nature enthusiasts can discover more than 30 different bird species that live and fly around the cliffs. Even if you aren't into the wildlife, the quiet magnificence of these rocky precipices awe-inspiring. The entrance fee — 7 euros ($7.68) for adults, free for children under 12 — covers parking, access to the visitor center and is used to help conserve the cliffs.

Related: Second Cities: Destinations to add on to a trip to Dublin

If you seek that Irish small-town experience, Clifden’s your spot. The town is nestled along the Atlantic coast in the expansive green countryside of County Galway and boasts live music, a thriving food and pub scene, and a myriad of outdoor excursions like fishing, horseback riding and cycling.

Explore the rolling hills behind the village that lead up to Clifden Castle, a roofless manor house dating back to 1818 that's slowly returning to the mossy, green pasture on which it sits. You can also drive along the Sky Road that rises 500 feet above the sea and offers stunning views of the ocean, castle and the Irish countryside. Clifden is close to Connemara National Park, so you can easily visit both destinations in one trip.

The Skellig Islands are two rocky isles — Skellig Michael and Little Skellig — that jut above the Atlantic a few miles off the coast of southwest Ireland. Skellig Michael, also known as Great Skellig, is a UNESCO World Heritage Site, famous for a sixth-century monastery that teeters on a cliff about 1,500 feet above the ocean.

Though it's a steep climb, visitors can hike up to see the remains of the monastery, where monks went to worship in isolation. If this scene seems mildly familiar, there’s a reason: It served as the secret hiding place of Luke Skywalker in "Star Wars: The Force Awakens." Because of inclement weather and rough seas, access to the islands is usually limited from May through September.

Related: How to go to Europe — just for the weekend — from the East Coast

A UNESCO biosphere reserve, Killarney National Park is one of the most protected parks in the country, with almost 26,000 acres of diverse flora and fauna. Home to massive natural wonders like the Macgillycuddy’s Reeks mountain range (some of the highest peaks in Ireland) and the Lakes of Killarney, the park also has some of the largest oak forests in all of Europe. Torc Waterfall is worth seeing, as is Ross Castle, a 15th-century regal ruin at the edge of the park.

The park showcases fauna such as native red deer and flora such as oakwood and evergreen trees, all of which flourish at Killarney thanks to its mild environment.

For those who want to venture into Northern Ireland, the Glens of Antrim are nine deep, narrow valleys near the coast. The rolling green hills of the glens are intermixed with craggy cliffs and monolithic rock formations.

Cruise the winding, harrowing roads to visit the glens via the Causeway Coastal Route. Glenariff is one of the most beautiful, with a cascading waterfall and the Glenariff Forest Park. All the glens are particularly suited for tranquil walks and hikes, with viridescent pastures, rolling hills, tree-covered backwoods and more.

County Antrim in Northern Ireland has several must-see sites besides the Glens. Stop and admire Giant’s Causeway, made up of thousands of connected basalt columns formed in an ancient volcanic eruption. The blustery coastal village of Ballycastle along the Antrim Coast is particularly quaint, especially if you love coastal walks. From Ballycastle, you can hop a ferry to Rathlin Island, Northern Ireland’s most northern point.

Dark Hedges, a mystical tunnel of beech trees, is also a popular sight -- you may recall it from Season 2 of Game of Thrones. Thrill-seekers should walk across the teetering Carrick-a-Rede Rope Bridge suspended 100 feet above the sea. The bridge links Northern Ireland with the teeny island of Carrickarede.

Guinness is not just a drink to sip or a factory to tour in Dublin. It's also the name of a lake in County Wicklow, Ireland. Although the formal name of the lake is Lough Tay, it allegedly holds the nickname Guinness Lake for a number of reasons. The lake sits on an estate owned by the Guinness family and the shape of the lake looks like a pint of Guinness. The white sand shore even resembles the foam on top of the pint.

The lake is private, so visitors can't swim or hang out near its waters. However, you can take in a panoramic view of the lake and its hilly surroundings. The best spot to see the pint-shaped lake is from up above at Military Road.