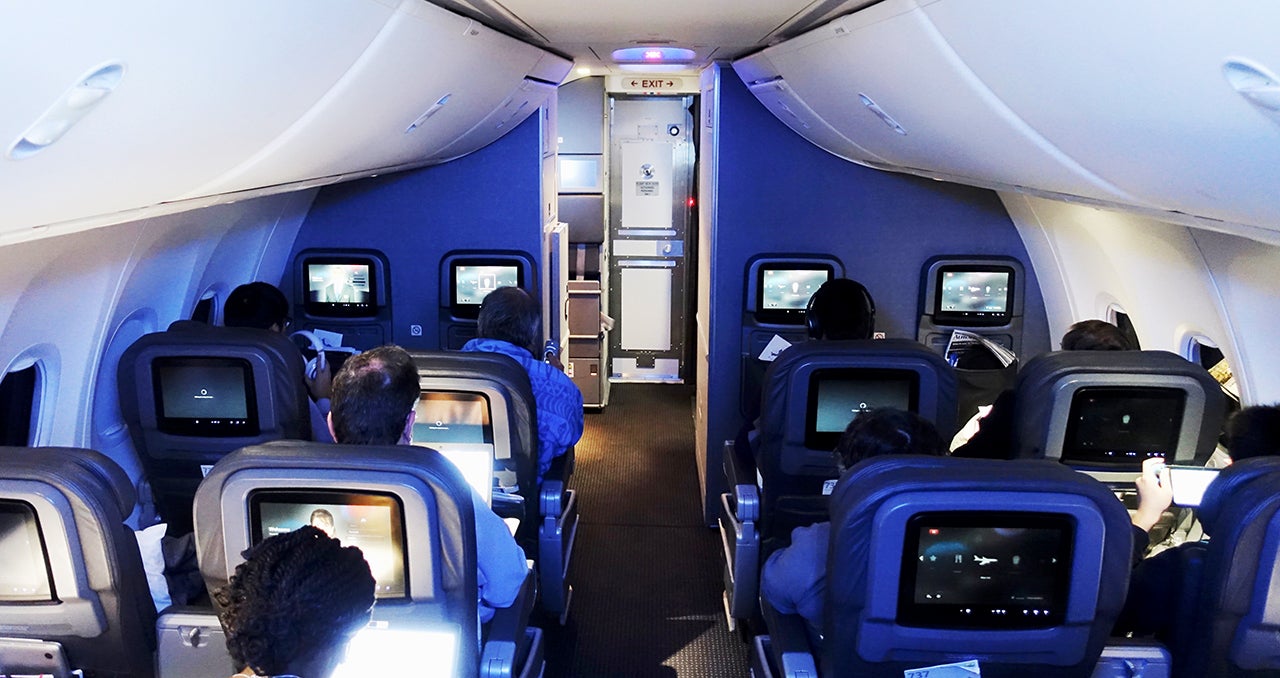 With the increased pressure coming from JetBlue’s Mint expansion, airlines have been forced to step up their game in traditionally non-premium transcon US markets. One of those is the Boston (BOS) to Los Angeles (LAX) route. While Delta added its premium Delta One product to the route, and United frequently operates a 757 with lie-flat seats, American — the carrier with the highest frequency between the two cities — has been lagging. Rather than expanding its Flagship transcon service or adding the Airbus A321 configured with lie-flat seats, American merely offers premium passengers a marginally enhanced service consisting of better bedding and guaranteed on-demand entertainment. Today, we’ll take a look at how American’s offering measures up.

One-way premium cabin flights from BOS to LAX are among the most expensive in AA’s domestic network — they tend to start around $1,073 and can be as high as $2,359 depending on when you fly. The flight I was looking at was going for $1,123 at the time. In comparison, all other carriers had flights available for less than that, in some cases, significantly less — JetBlue was offering its phenomenal Mint product for just $599 and Delta had a flight available for $649.

Since there was no chance that I would pay nearly double what JetBlue was asking to fly AA, I decided to look at my mileage redemption options. Although AA is known for having frustratingly little “MileSAAver” award availability, I lucked out during my search because there was one Business/First Saver level seat available on exactly the flight I needed. My ticket ended up costing 25,000 American AAdvantage miles plus $5.60 in taxes, providing a phenomenal value of about 4.5 cents per mile — more than double what they are worth based on TPG’s latest valuation. I paid for the $5.60 in taxes using my Chase Sapphire Reserve so that my award ticket would be covered by trip insurance in case anything goes wrong.

Although all AA flights depart from Logan’s Terminal B, the airline operates out of two opposite ends of the terminal — Gates B4-B19 and Gates B30-B36. There are check-in counters at both ends of the terminal so you’ll want to check what gate your flight is departing from to know where you need to be dropped off. Since my flight was departing from Gate B31, I was dropped off at the second check-in area. That being said, had I accidentally checked in at the wrong part of the terminal, the terminal’s U-shape would have allowed me to make the trek to the correct gate area without having to re-clear security.

Once inside, I headed straight to the priority check-in counter. Although premium cabin passengers and elite members shared one priority check-in line, I was able to get through in a matter of minutes — the main check-in area didn’t look crowded either when I was there.

The security area was much busier, though, and made me appreciate the fact that I had TSA PreCheck. Although I also had access to the priority line, I typically find the PreCheck line to be quicker.

Since there is no Admirals Club access for first class passengers on this route and I don't have the Citi / AAdvantage Executive World Elite Mastercard, I waited by my gate until it was time to board. With the exception of the club’s new made-to-order guacamole, I probably didn’t miss much as there was already an abundance of power outlets available throughout the terminal and the airport’s free Wi-Fi worked well. Note, JetBlue Mint does not come with lounge access either, but Delta One does.

The boarding process began right on time with ConciergeKey members being invited to board first, followed by Group 1 which consists of first class and US military passengers. I was immediately greeted by a flight attendant as I made my way onboard.

Being just about one-and-a-half years old, our 737-800, registered N992NN, felt quite fresh. The first class cabin consisted of 16 seats spread across four rows in a 2-2 configuration.

There are no rows 1 or 2 on this plane so my seat, 4A, was actually in the second row. Each seat had 38 inches of pitch and was about 20 inches wide. While not identical — the first class seats on the 737 MAX are — these seats are very similar to what you’ll find in premium economy on AA’s long-haul aircraft.

When reclining the seat back, the seat cushion also slides forward. Although not the most comfortable when trying to get some shut-eye, this means that your personal space is not affected much when the person in front of you reclines.

Overall, this seat is great for short and medium-haul flights such as between Chicago O’Hare (ORD) and Los Angeles (LAX), but it is definitely not the most appealing option for transcon flights — Delta One and JetBlue Mint both come with lie-flat seats.

Since BOS-LAX is among the routes to have American’s upgraded bedding, waiting at each seat was a Casper pillow and duvet — the same ones that business class passengers receive on long-haul international flights. While I thought the duvet was indifferent, I was a huge fan of the fluffy pillow. Although the premium bedding is provided on this route, amenity kits unfortunately aren’t.

As a part of the enhanced service on this route, premium passengers are guaranteed on-demand entertainment. Although seat-back entertainment screens were available on this aircraft, I would have been provided a Samsung tablet loaded with content had that not been the case. The picture was crisp and the tilting function allowed me to see clearly even when the seat in front of me reclined.

I found the 12.1 inch touch-operated screen to be quite responsive, though I could have also used the remote control had that not been the case. I typically don’t have trouble keeping myself entertained with AA’s system and this flight was no exception — there were plenty of movies, TV shows, music and games for me to choose from. Although the system allows you to browse the drinks menu, you can’t actually order anything through it, unlike Virgin America’s RED.

Unfortunately, the enhanced entertainment does not include the amazing Bose headphones AA provides on its Flagship transcon flights or long-haul international. Instead, all that was available were the same lousy earphones that are offered in coach.

The headphone jack, along with a universal power outlet, USB power plug and eXport plug (to connect your iPod or iPhone to the IFE) was located between seats. The aircraft was equipped with Gogo in-flight Wi-Fi, but it was barely usable. Although I was eventually able to share a couple of photos from the flight on my Instagram story, for the most part, I was unable to fully load webpages or emails. It took several failed attempts before I could successfully run a speed test.

To be fair, there was a warning prior to purchasing one of the overpriced passes that I may experience a slower than usual internet connection due to high usage.

There was one lavatory available to first class passengers at the front of the cabin. It was stocked with C.O. Bigelow lemon hand soap and kept fairly clean for the duration of our flight.

Shortly after boarding, I was offered my choice of beverage, served in a plastic cup. As soon as we passed 10,000 feet, the attendants greeted each passenger by name and took — or confirmed — dinner orders from back to front. The choices were cheese cappelletti with roasted garlic artichoke sauce or grilled chicken with couscous, roasted vegetables and roasted garlic sauce, though anyone who pre-ordered their meals up to 24 hours prior to departure also had the choice of a fruit and cheese plate or special meal. I was glad that I pre-ordered my meal because the passenger seated in front of me was unable to get his first choice and ended up taking up the attendant’s offer for a free item from the main cabin’s buy-on-board selection. Although the attendant provided thorough descriptions of the two options — opposed to just “chicken or pasta” — small touches such as a printed menu would have made the flight feel more premium.

The meal service began with a hot towel followed by the beverage I had ordered, which was served with a side of slightly warmed mixed nuts. I appreciated that everything on this flight was served individually from the galley rather than from a cart pushed down the aisle.

About 15 minutes later, the attendant returned with my meal and proactively refilled my glass. My cheese cappelletti came with an antipasto plate and a Greek salad on the side. There was also a bread basket consisting of toasted multigrain, french and pretzel rolls. With the exception of dessert, the entire meal was served on one tray. I found the cappelletti to be surprisingly delicious. Contrary to most pasta dishes I’ve had on AA, it was not dry and quite flavorful.

For dessert, I was offered a choice between AA’s signature made-to-order sundae and a cheese plate, along with a refill of my beverage. Since I figured that I had already consumed enough cheese by that point, I chose the sundae. I opted for strawberry syrup and whipped cream for my toppings, though I could have also requested hot fudge, caramel and chopped nuts.

About an hour-and-a-half prior to landing, an attendant came around the cabin with a snack basket. It included chips, cookies, popcorn, bananas and apples. Although I really didn’t need it after the sundae, oddly, AA’s infamous freshly heated cookies were not offered on this flight. As is typical on AA flights, right before landing we were offered mints.

All in all, I had a pleasant 6.5-hour hop across the country. Although service can be a hit or miss on domestic flights, I definitely lucked out because it was phenomenal on this flight. The attendants remembered passengers’ names and passed through the cabin frequently to refill drinks — I had a glass by my side for the entire flight and the attendants made sure that it was never empty.

That being said, I’d still pick Delta One or JetBlue Mint over AA when flying this route. Even if it doesn’t expand its premium transcontinental service, I strongly believe that it must add lie-flat seats to remain competitive. Although it temporarily flew its three-class A321T aircraft over the holidays in December, given that it has a very limited number of these aircraft, and according to AA insider JonNYC won’t be adding any more, I don’t see this becoming a norm. However, this route is probably not premium-heavy enough to sustain the three cabin aircraft anyway. If AA adds lie-flat seats to this route, they’d most likely fly their recently retrofitted 757s, though that would mean a downgrade for those in coach.