Here's the New Emirates First Class Suite on the 777-300ER

Articles
Alberto Riva Alberto runs our flight reviews and oversees special projects across several verticals. Previously, he was the managing editor of Vice News and worked at Bloomberg and CNN, where he was constantly trying to convince people to do more stories about airplanes. He speaks Italian, French and Spanish and one day he’ll be better at German.
Follow
Nov. 12, 2017
•
6 min read 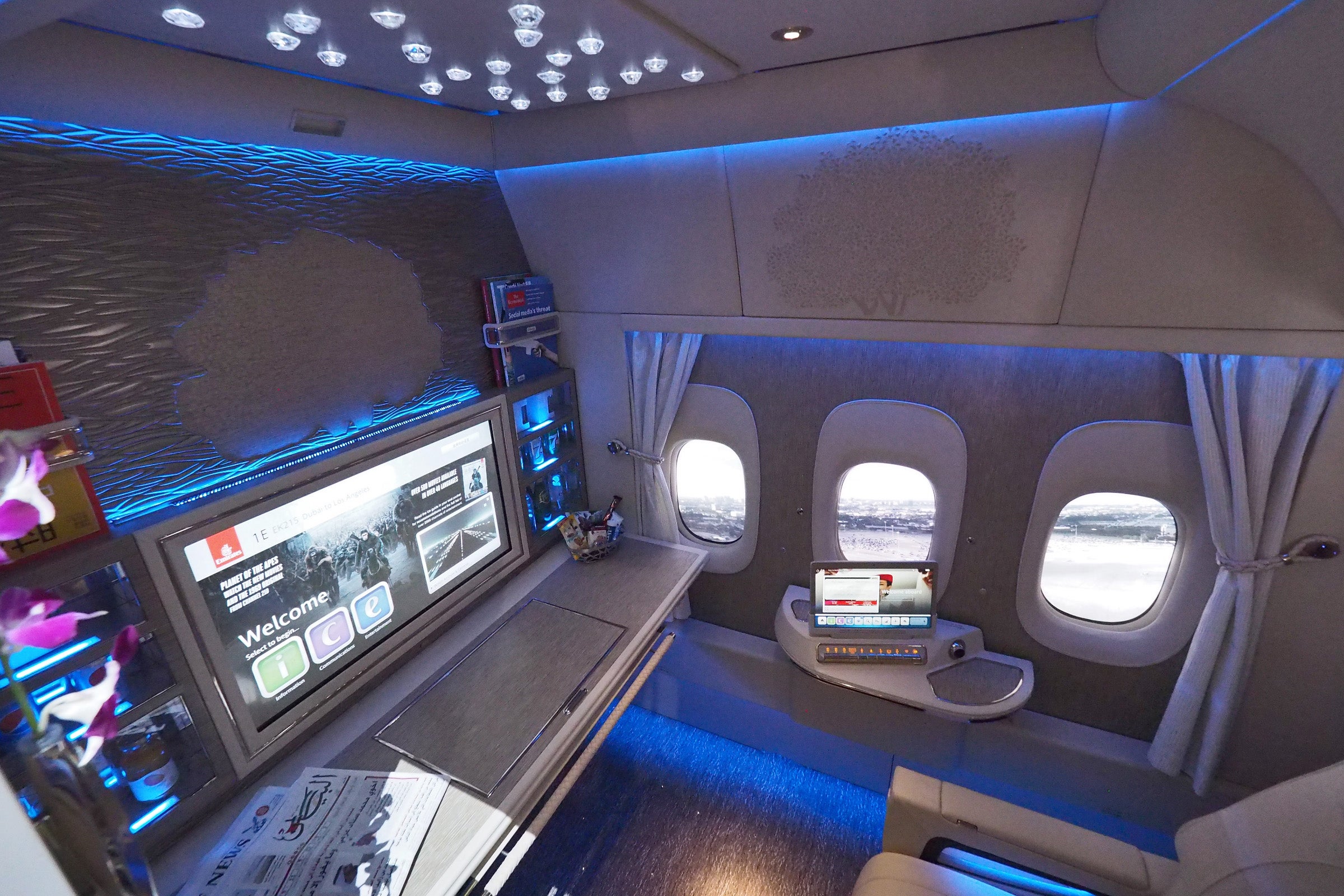 Here's the New Emirates First Class Suite on the 777-300ER
This post contains references to products from one or more of our advertisers. We may receive compensation when you click on links to those products. Terms apply to the offers listed on this page. For an explanation of our Advertising Policy, visit this page.

Emirates is launching its new first class suites on the Boeing 777-300ER on December 1, in what Emirates president Sir Tim Clark calls “a major rethink of how we deliver first class service.” Sir Tim introduced the new suites Sunday, on the first day of the Dubai Air Show, selling the new product as a “game changer” days after direct competitor Singapore Airlines unveiled its own new first class suite for the A380.

The new first, with six suites in a 1-1-1 configuration, is debuting later this year on flights to Brussels (BRU) and Geneva (GVA) initially, and will then appear on other flights throughout the Emirates network, including Chicago (ORD) as the first and so far only suggested destination in the US — but it won’t be widely available for some years.

The only plane currently configured with the new product is on display at the air show, “flown in from Seattle brand new,” Clark said at a press conference. Another will be delivered next month. The airline still has six 777-300ERs on order, which will come from the factory already configured with the new cabin — and then some existing planes will be converted. “We’ll have probably eight or nine maximum by the end of 2019,” Clark said.

Emirates hasn’t decided yet if it wants to convert all of its 126 existing 777-300ERs to the new product: “We’ll look at the 300ERs and how much life they have left, and see if it’s worth to make over,” Clark said.

The redesign reduces the number of seats in first class from eight to six, with each suite measuring about 40 square feet, at 7 ft long and with doors reaching 6 ft 9 in high. Emirates has designed them in partnership with Mercedes Benz, taking “design cues on the seat, lighting, stitchery and leather,” Clark said. The suite adds a hatch that can be dropped when the doors are closed so crew can pass food and drinks through, and the bed is against the side wall “so people can stand and change” when the suite is in bed mode, Clark said. A 32in high-def screen with cabinets and minibar is at the foot of the bed.

But the real innovation is the virtual windows in the two center suites. “They have high definition cameras relaying images from the outside,” and “you can change if you look left or right,” Clark explained. Another video-based innovation is direct connection to cabin crew via the iPad-type screens in each suite. “You tap on the screen and the cabin crew’s face appears in the the galleys," Clark said. The connection works both ways — flight attendants see the passenger too, “and you can tell them what you want.”

Together with the hatch to pass food and drinks, video chatting with flight attendants could minimize contact with crew if a passenger wants. “We’re trying to create an enclosed, private environment,” is how Clark described it. (As for the risk that passengers will use the suite's privacy for behavior not condoned by the airline, Clark just said "I don't think the bed is big enough for two, unless they are very small people." But, he added, “generally, people behave.”)

As for where fliers can experience the new suites, Clark just mentioned the one US destination, Chicago, plus initially Australia, but the new product will be “ubiquitous” once the 777-9 arrives in the fleet, beginning in 2020. There’s no timeline yet for the introduction of the new suites to the A380, which Clark called “a formidable task.” First class on the A380 will go from 14 seats today to 11 with the new suites, Clark said.

The reconfigured 777s also have a new business class, but still in a 2-3-2 layout that isn’t up to many competing products in 1-2-1 layout offering unimpeded aisle access for all passengers. Seat count remains at 42.

This is “the last makeover of this generation of seats for us, because we’ll change out seats on the 777X in 2020,” Clark said, using the original name for the now-renamed 777-9.

Economy is also redesigned, with new colors and seats. It’s a “ much lighter cabin,” Clark noted. When asked whether the color similarity with low-fare FlyDubai was meant to signal a future integration between the two airlines, he said “the relationship is in the early stages, and we hope it will continue to accelerate.” The pitch for most seats is 31 inches — not generous but standard on many international coach class products.

The advertising campaign around the new first features a video starring Jeremy Clarkson, the British automotive-show host who was fired by the BBC for assaulting a producer and has been accused of making racist references. (He has recognized the problem, and apologized.) The risk of controversy wasn’t lost on the audience at the Dubai event. “You may not like him,” Clark admitted in response to a question. “Most people find him amusing, sometimes irritating, but he has a global following,” and the choice of a car-show guy as the airline’s face “seemed quite a good thing given our relationship with Mercedes Benz.”

“We could have had Jennifer Aniston,” who famously starred in a previous Emirates commercial, “but we didn’t,” Clark joked. “We think Jeremy Clarkson will draw the eye.”

In addition to visiting the new 777-300ER at the Dubai Air Show, The Points Guy staff is also going to be on the first commercial service — so stay tuned for our review of the first flight of the new first class, on December 1 from Dubai to Brussels.

Images by Zach Honig / The Points Guy unless otherwise noted.