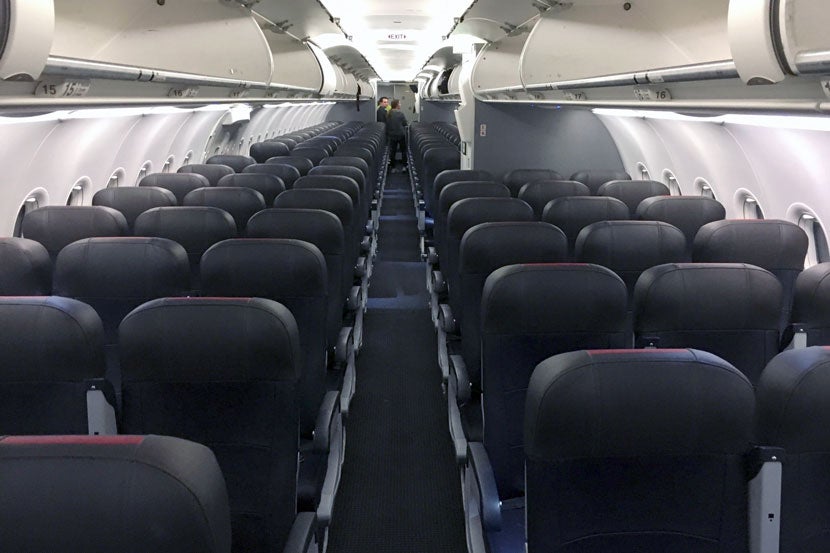 Now that all three major US legacy carriers have introduced their own versions of basic economy, I was curious to see how the new offerings compared. After experiencing basic economy on United and Delta, the time had come for me to try out American Airlines' version.

As with United and Delta, American’s domestic awards aren’t subject to basic economy restrictions — for now, at least — so I knew I’d have to pay for my ticket in cash. One-way basic economy fares from Boston (BOS) to Chicago O'Hare (ORD) on American and United were both going for $45.20 at the time, while JetBlue offered a standard economy fare for $77.

Like my previous experiences booking basic economy fares with the other carriers, a pop-up window appeared listing all the restrictions that come along with this type of service and offering me the option to move to a Main Cabin fare for an additional $20.

On the final booking page, there was yet another reminder of the looming restrictions. I used my Chase Sapphire Reserve Card to pay for the flight, which allowed me to earn 3x points — or in this case, 135.60 Ultimate Rewards points — for the travel purchase. As an AAdvantage Gold member, I earned 203 AAdvantage miles, as well as 434 Elite Qualifying Miles (EQM), .5 Elite Qualifying Segments (EQS) and 29 Elite Qualifying Dollars (EQD). Basic economy flights earn half of the flight miles as EQM and only half of the segments flown as EQS. However, award miles and EQDs are still based on the actual price of the flight less taxes.

Although my trip confirmation and the reminder email sent three days before my flight clearly listed out the restrictions my ticket came with, there was no indication on the AA app that I'd be flying in basic economy as there had been with both Delta and United.

About 48 hours prior to departure, an option to pay for a specific seat became available. Regular seats were going for $10-$11, Preferred for $17-$19 and Main Cabin Extra for $39 — just like they usually are for standard main cabin passengers who want to pay to upgrade to better seats. While my AAdvantage elite status allowed me to select a seat reserved for elite members, I would have still had to pay the full price if I wanted one. Instead, I opted to embrace the full extent of the basic economy experience for the purposes of this review.

I logged back into the AA website 24 hours before my flight to check in as I normally would, but was disappointed not to find an option to do so. Note that there have been reports of basic economy passengers being able to successfully check in online, so I either encountered a system glitch or this is something that varies based on how full a flight is.

Since I was unable to check-in online ahead of time, I had to stop by a kiosk when I got to the airport. Despite having access to priority check-in, I was a actually better off going to the general check-in area since it was less crowded and had plenty of open kiosks. There weren't many standard seats available the last time I checked so I was hoping that by not paying to select one in advance, I might end up with a free upgrade to a Main Cabin Extra or Preferred seat. Unfortunately, that was not the case and I was stuck with 31B, a middle seat in one of the last rows.

Since I try to avoid sitting in a middle seat whenever possible, I asked the gate agent if it was possible to switch to another seat. While he seemed more willing to help than the United agent had been, at this point, the only open spot also happened to be a middle seat.

AA has nine boarding groups, with basic economy passengers part of the last one. However, if you have elite status or a co-branded card like the Citi / AAdvantage Executive World Elite Mastercard, you get to keep your usual priority boarding privileges and carry-on allowance. Note that as a regular basic economy passenger, you’re only allowed to bring a small personal item, otherwise you’ll be charged the applicable baggage fee plus an additional $25 service fee for checking it at the gate.

There are three different versions of A321s in AA’s fleet, and each of them offer radically different experiences. Our A321, registered N199UW, was a former US Airways aircraft, delivered to the now-merged airline in 2013, with 16 seats in First, 18 in Main Cabin Extra and 153 in the main cabin. This model was listed as “321” on AA’s website, while the newer ones are listed as “32B.” With the exception of emergency exit rows 11 and 24, the main cabin was arranged in a standard 3-3 configuration.

While this type of A321 lacks amenities (more on that later), being stuck in a middle seat made me appreciate that these seats were still slightly more comfortable and roomy than they had been on its successor. Main Cabin seats on this aircraft are 17 to 18.1 inches wide and have 32 inches of pitch compared to the others, which are only 16.3 to 17.7 inches wide and have just 31 inches of pitch.

I liked that these seats had thicker padding than the new slimline seats, though the lack of a headrest restricted me from leaning my head to one side or the other.

The one good thing about not having seat-back entertainment screens on this A321 is that there are no entertainment boxes below, which typically restrict legroom on the newer versions of these aircraft.

Although many ex-US Airways A321s have been refreshed with new seat covers, American neglected to add in-seat power outlets or personal entertainment screens — even in First. While not as big of a deal for shorter hops like this, given that these aircraft often operate many of the non-premium transcontinental flights, I see this as a huge miss.

On the bright side, these planes do have Wi-Fi and complimentary wireless entertainment streaming for those who bring their own devices. There was a decent selection of recent movies and TV shows for me to choose from and I wouldn't have had any trouble keeping myself occupied if the flight was longer — assuming that my device didn’t run out of juice anyway. You can see what’s playing by checking AA’s entertainment website.

Since our flight was only about two hours long, I thought the prices for internet access were high, especially for the "Flight Pass." That said, because the Wi-Fi service was provided by Gogo, T-Mobile customers were able to get an hour free and score unlimited free messaging. Had I wanted Wi-Fi for the duration of my flight, I could have saved nearly 50% by purchasing an AA All-Day Pass from Gogo before my flight.

The speeds were good enough to browse the internet and respond to emails, but nowhere near as fast as the 2Ku service I had experienced on Delta or the complimentary Fly-Fi service I experienced on JetBlue.

There are three bathrooms accessible to economy passengers on this plane: one in the center of the cabin and two in the rear. They were nothing out of the ordinary and were kept fairly clean for the duration of our flight.

Since basic economy passengers receive the same service as other main cabin passengers once onboard, I was able to enjoy complimentary beverages. I was hungry for more than just the Biscoff cookies that accompanied my drink so I splurged for the $8 “Snack Pack,” which included salami, olives, pita chips, a cheese spread, chocolate fruit clusters and a mint.

While it’s possible to defeat many of its negative aspects by having elite status or a co-branded AA credit card, I don’t see myself flying basic economy on American Airlines again anytime soon, especially not on an A321 that doesn't even have power outlets. Given that it would have cost me $10 more if I wanted to select my seat — or even more if I wanted a premium one — I would have been much better off paying the $20 outright to upgrade to a standard main cabin fare. For me, a potential savings of $10-$20 does not justify taking the risk of being stuck in a middle seat — though sometimes the fare difference is much greater. Remember, you should always check your fare class before buying flights through a travel portal so you don’t find yourself accidentally booking a basic economy ticket.