Articles
Ethan Steinberg has been a frequent flier for as long as he can remember. He went from studying abroad in Paris to moving to Shanghai after graduating college, where he covered all things travel in the Asia-Pacific region for TPG.
Sept. 13, 2017
•
13 min read 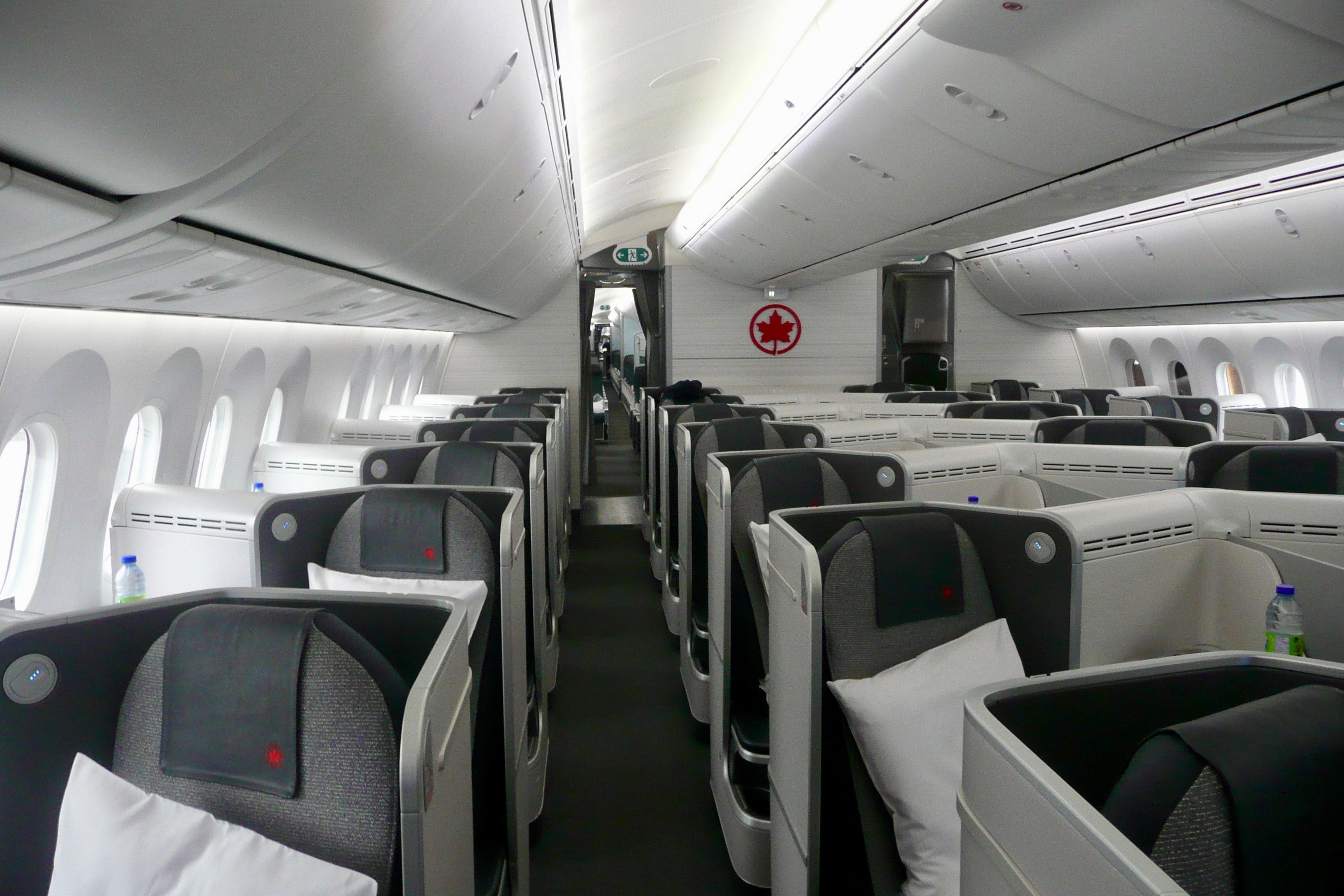 Between all the ways travelers have to get between the US and Asia, Air Canada often gets overlooked. Star Alliance passengers have luxurious options via Singapore Airlines, ANA or Thai Airways, while those flying east have Lufthansa to consider — even United is making a serious grab at the premium cabin market with its Polaris business class. Thankfully, Air Canada has decided to step up its game by introducing a new "Executive Pod" business class on its new 787s and select 777 aircraft this summer.

After an incredible trip through Southeast Asia, I needed to find a way to get back to Chicago from Okinawa, Japan, and had a large stash of United MileagePlus Miles and Chase Ultimate Rewards points that I planned on using. Unfortunately, all the award seats on the day I needed to travel had two stops, leaving me with a choice of which carrier I wanted to fly on the long-haul leg: ANA, United or Air Canada. I was originally booked to fly ANA to Bangkok at the start of the trip and I wanted to try a different airline, so I ruled that one out. Since United hadn't yet launched Polaris when I was booking this trip, I went with Air Canada.

I was able to book the above itinerary, including flights from Okinawa to Tokyo and Toronto to Chicago for 75,000 United MileagePlus Miles and $42.86 in taxes. Because United treats Japan as a separate region, this flight was 5,000 miles cheaper than if I'd been departing from North Asia. Unfortunately, United recently announced an award chart devaluation that'll bring the cost of this award ticket up to 80,000 miles if it's booked after November 1, 2017. If I'd paid cash, the price would have been $3,956 and netted me a value of 5.21 cents per point — that's more than triple TPG's most recent valuation of 1.5 cents per point. You can also book this flight for 75,000 miles through Air Canada's Aeroplan rewards program.

Since I was connecting on an ANA flight from Okinawa, I headed straight to the ANA Lounge once we landed in Tokyo.

It was extremely crowded when I got there since all Star Alliance business- and first-class passengers have access, as well as Star Alliance Gold members. After struggling for a few minutes to find a seat, I dropped my bags and went to check out the dining room.

I especially appreciated the build-your-own miso soup station, since I was coming down with a cold after spending three weeks on the road.

Here's a look at the self-serve bar, which had a selection of wines and liquors for guests to choose from.

My flight was delayed 45 minutes due to a late inbound aircraft, so at 4:50pm, I left the lounge and headed to Gate 31. While nobody likes a delay, it did mean I was in perfect position to snap a few shots of our beautiful 787-9 as it taxied in.

Priority boarding was finally called at 5:45pm and as I turned right to enter the business-class cabin, I was taken aback by how sleek and modern everything looked — it even had that new plane smell even though the aircraft operating my flight, tail number C-FPQB, had celebrated its first birthday just a couple of months ago.

The business-class cabin is laid out in a 1-2-1 configuration, with eight seats along each wall and seven pairs in the center, for a total of 30 seats. Each seat is 21 inches wide and 80 inches long when fully flat.

I also managed to get a quick peek at the premium economy cabin, which is spread out over three rows in a 2-3-2 configuration. The seats looked comfortable enough, but the real highlight was that there's only one middle seat per row.

I was in 6K, a window seat on the right side near the back of the cabin. While the seat itself is similar to the reverse herringbone products you might find on American Airlines or Cathay Pacific, I found it to be incredibly comfortable and well-designed. The storage compartment on the right — which housed the power outlet, USB plug, headphone port and handheld IFE controller — was perfectly sized for smaller items like my phone and wallet. The surface next to it was big enough to store my headphones and a water bottle, and I never had a problem with anything sliding around even when we hit turbulence.

The seat controls were located on the right, with a touch screen display that could adjust individual parts of the seat, as well as buttons to allow it to become a bed or be fully upright.

Even in lie-flat mode, the seat was one of the most comfortable I've ever experienced. I slept for a solid six hours and only woke up when a nerve wracking announcement was made: "If there are any doctors on board, please make yourself known to the cabin crew immediately." Apparently a baby had started choking on a piece of a plastic fork. Thankfully, by the time the crew realized there were in fact no doctors on our plane, he was breathing again.

Already waiting at my seat prior to boarding were an amenity kit, slippers, and a bottle of water. The kit was stocked with all the usual goodies socks, eye shades, earplugs, a toothbrush, and moisturizer. The pouch itself was a cheap scratchy cloth material, definitely not worth taking home but perfectly fine for on board use.

Also waiting at the seat were noise cancelling headphones, but I just used my own Bose headphones instead.

You can select content by using the handheld controller in the storage compartment, but I ended up just using the touch screen, which was more responsive than I would have expected. The in-flight entertainment selection was solid, with a number of TV shows, movies and new releases. I watched a few episodes of Donald Glover's hit show Atlanta after dinner — by that point the cabin lights had been dimmed.

I really appreciated how the crew used the Dreamliner's mood lightning feature throughout the flight. Instead of the lights just going off after dinner, they worked their way through a relaxing series of pinks and blues. It's hard to say how much of a difference the lights really made on their own, but I know I arrived in Toronto feeling well-rested.

Shortly after settling in, a flight attendant came by with a tray of pre-departure beverages, offering a choice of Champagne, water and orange juice. Air Canada serves Champagne Drappier Carte d'Or Brut, which retails for about $45 on the ground.

The rest of the wine list was as follows:

There was also a selection of spirits, including Bombay Sapphire, Smirnoff vodka, Johnnie Walker Black Label as well as a few beers like Heineken, Coors Light and Molson.

Here's a peek at the menu, which was distributed while we were still on the ground. Meal orders were taken shortly afterward.

There were a total of 19 people in the business-class cabin, so it was less than 2/3 full, but by the time the flight attendant reached me, both the beef and the Japanese Kaiseki options were gone. She said that they'd only loaded five of each meal, even though in her experience almost everyone tended to order either the beef or Japanese Kaiseki dishes. I'm not a picky eater and I certainly don't mind not getting my first choice, but if you run out of half the menu, you're going to end up making some passengers unhappy.

Service began about 40 minutes into the flight, with drinks and nuts. From there, it was another 30 minutes until the appetizer of roast duck in honey sauce was served. While the dish itself was tasty, it was served below room temperature but wasn't actually cold enough to be considered chilled. It came with a small salad with balsamic vinaigrette on the side. I was also offered a roll from the bread basket.

While the meal service was pretty slow to start, the pace picked up from here on out. My appetizer plate was cleared and I was served the grilled chicken I'd selected on the same (now mostly empty) tray. The chicken was a little tough, but I really enjoyed the couscous stuffed red pepper that came with it.

Next, I was offered a cheese and fruit plate, and had a glass of Riesling to accompany it.

For dessert, I had the raspberry chocolate cake, which was every bit as delicious as it sounds. I was also offered a container of vanilla ice cream but it was frozen solid and I was barely able to eat it.

The service was complete a little under three hours into the flight, which is definitely on the long side. That said, the crew was professional and polite throughout and very apologetic when they ran out of the main courses.

After dinner, I reclined my bed and slept for about 6.5 hours, waking up just in time for breakfast service. I wasn't especially hungry but decided to take one for the team and order an omelette. Service began with hot towels, followed by a tray full of fruit, yogurt and a croissant. The flight attendant then rolled a cart through the aisle with the two entrées, a chive omelette or pork cutlet, which I appreciated since it let me pick the dish that looked more appetizing.

Unfortunately, looks can be deceiving and this was definitely a low point of the meal. The eggs were rubbery and I barely touched them, opting instead to load up on fruit and coffee to hold me over for my last flight of the day, the 90-minute hop from Toronto (YYZ) to Chicago (ORD).

Breakfast service was definitely a little rushed, but I give the crew the benefit of the doubt here as they were dealing with a legitimate medical emergency (mentioned above) and it wasn't clear if we'd have to divert the flight. In between meals, snack baskets with fruit and chips were set up on the bulkhead seats at the front of the cabin.

Air Canada's 787-9 business-class product definitely exceeded my expectations. While I wouldn't go out of my way to fly it on a two-stop route again, if the timing worked out, I'd definitely consider this a solid redemption option. I've taken more luxurious flights before, but I can't remember the last time I landed feeling this well-rested.

Have you ever flown in business class on Air Canada's 787-9? Tell us about your experience, below.