Delta's First A350 Now Bookable With Cash or SkyMiles 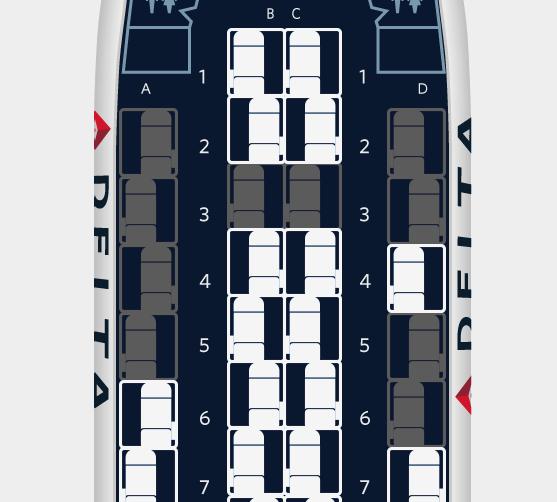 Delta's First A350 Now Bookable With Cash or SkyMiles
This post contains references to products from one or more of our advertisers. We may receive compensation when you click on links to those products. Terms apply to the offers listed on this page. For an explanation of our Advertising Policy, visit this page.

Update 6/18/17 3:30pm: At the moment it appears if you book a Delta Premium Select premium economy seat on the A350 and connect to/from Detroit on another Delta flight, your ticket will include first class seating on the connection. It's not clear whether this is intentional by Delta or a bug, but it's a nice if somewhat unexpected perk. (H/T: Rene's Points)

A few days ago, the very first Delta Airbus A350-900 rolled out of the paint shop in all its glory, but now we know where and when the plane is scheduled fly its first official inaugural revenue flight.

Seat maps loaded at delta.com show the A350 configuration, including 32 new Delta One suites along with the airline's new Premium Select premium economy cabin featuring 48 seats, on Delta flight 275 from Detroit (DTW) to Tokyo/Narita (NRT) at 1:40pm starting October 30. The return on October 31 is Delta flight 276 departing from Narita back to Detroit at 5:50pm Tokyo time. Delta currently has a 747-400 flying this route, which is scheduled to be operating using the same flight numbers up through the previous day.

The new Delta One product is a suite with closing doors, sliding privacy dividers between the middle two seats in the 1x2x1 configuration and an 18-inch inflight entertainment system screen — amongst other features. The Delta Premium Select premium economy cabin will have seats arranged in a 2x4x2 layout with 38 inches of pitch, 7 inches of recline and adjustable leg rests and head rests. The A350 is Delta's first aircraft model to feature either of these new products, though the seats are expected to make their way to Delta's 777-200s sometime in 2018.

It's also now possible to book these new Delta One and Delta Premium Select seats using SkyMiles, even on the inaugural flight to Tokyo itself, but you'll pay a hefty price for doing so. Delta One seats are currently pricing at 160,000 SkyMiles in one direction — though there is availability across Delta's award calendar at that price. Premium Select is available for 65,000 SkyMiles one way, which is the same price Delta is charging for economy on the inaugural flight as well (though you can find a smattering of regular economy seats at 35,000 for dates in 2018). In comparison, a one-week Detroit-Tokyo round-trip on the Delta A350s is selling now for $9,495 in Delta One and $2,422 in Premium Select.

Note that while this is currently scheduled to be the first "official" A350 revenue flight, it's always possible that Delta's plans could change before October 30. Also, these A350s may do test runs on domestic flights on earlier dates in order to train cabin crews before the planes are put on the longer international routes. Still, if you'd like to take a trip on Delta's new A350, now's as good a time as any to book your ticket.