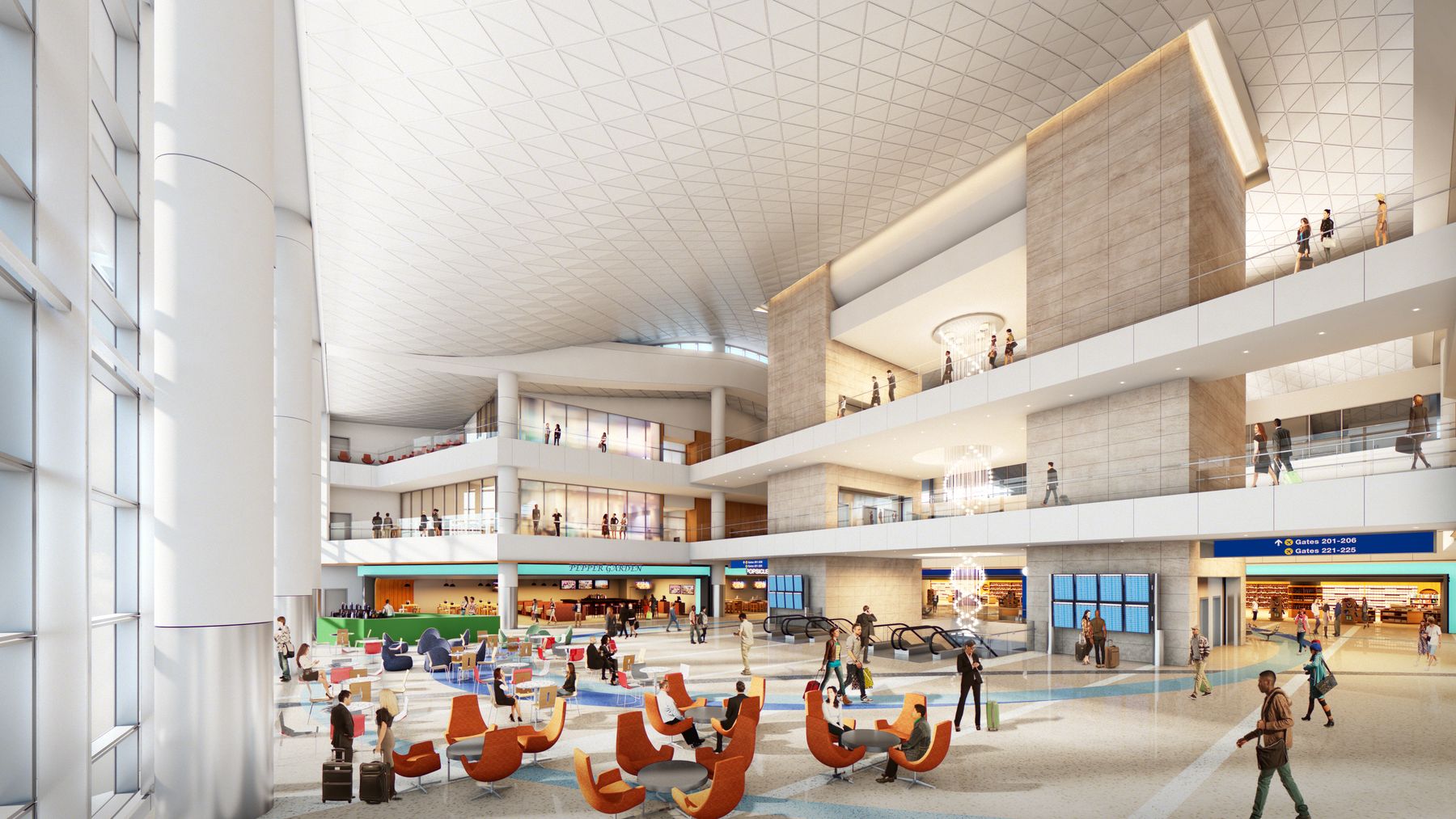 As part of an ongoing modernization project to help bring LAX into the 21st century, Los Angeles International Airport (LAX) has begun construction of a brand new terminal, which will allow it to handle more international flights. The new space will be located just to the west of Tom Bradley International Terminal (TBIT), connected by an underground tunnel with 1,000-foot moving walkways. It'll house 12 new gates, including two that can accommodate very large aircraft — like those behemoth Airbus A380s. In addition to those gates will be 750,000 square feet of lounge and retail space. Construction is expected to cost $1.2 billion and will be completed in 2019. Here's a sneak peek at what's coming:

The LAMP Lights the Way

The most significant part of the upgrade at LAX is the Landside Access Modernization Program (LAMP), which includes an intermodal transportation system that'll allow travelers to move between terminals without exiting security — you know, the way a modern airport should be doing things. The tramway will begin offsite at a new shared-use car rental facility and it'll be 2023 before this is completed, as Los Angeles aims to host the Olympic Games in 2024.

LAX is also spending about $3 million per day on dozens of other projects around the airport to improve the passenger experience. Let's take a look at each terminal to see what's being done:

Southwest Airlines is spending roughly $508 million of its own money to revamp its LAX home, with new passenger check-in areas, aircraft parking and upgraded TSA screening lines. The roadways are also being improved to help with the flow of traffic. The Terminal 1 project is expected to be completed in the spring of 2018.

$300 million is being spent to help give Terminal 2 a more cohesive feel throughout the building. 18 new dining and retail concepts, additional charging stations and more lounge space are being implemented into the design.

Delta is investing $1.9 billion as part of a seven-year project that will combine Terminals 2 and 3 to create a new home for the airline and its partners.

$148.5 million was recently invested to connect Terminal 4 with the TBIT. There's a specialized roof that reflects 80% of the sun's energy, which in turn makes it cheaper to cool the building. The motors within its modernized baggage system use 40% less energy and the terminal now sports energy-efficient LED lighting in all public areas.

A recent $229 million renovation is now complete, resulting in 19 dining and shopping areas, a renovated Delta Sky Club lounge and additional security and ticketing space. Note that American Airlines and Delta have made some terminal changes this year, with AA getting some extra gates in T5 and Delta moving some to T6.

In Terminal 6, Alaska Airlines contributed $16 million, while the TSA put forth an additional $20 million for the $238 million project that resulted in more self check-in kiosks and upgraded TSA screening checkpoints. 21 new dining and retail facilities are also on the way.

These two terminals are a major hub for United Airlines flights on the west coast and their last major refresh was nearly 20 years ago. United is putting forth most of the construction cost, up to $534 million, including a major lounge upgrade that fits with its recently-debuted Polaris product.

Although the upgrades at LAX are still six or seven years from completion, they're obviously important in keeping LAX on the world stage of airports. We'll keep you informed of any future changes at LAX.