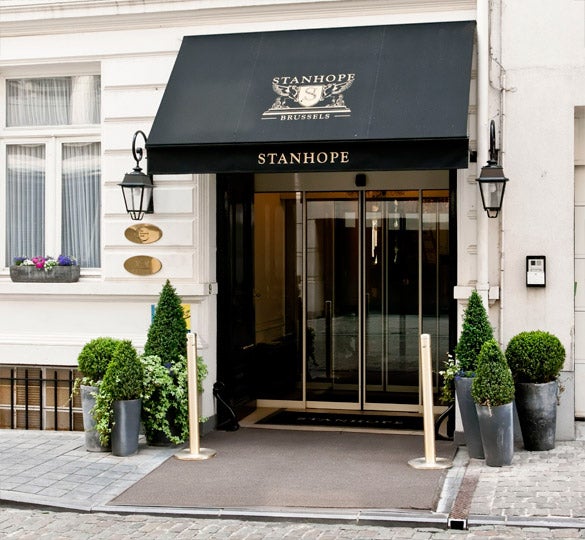 Hotel Review: The Hotel Stanhope Brussels Via Hotel Tonight
This post contains references to products from one or more of our advertisers. We may receive compensation when you click on links to those products. Terms apply to the offers listed on this page. For an explanation of our Advertising Policy, visit this page.

Last week, TPG Creative Director Adam Daniel Weiss stayed at the The Stanhope in Brussels. The following is his review of his experience at the property.

My first night in Brussels was a good one at the Dominican, and as much as I would have liked to have stayed an additional night, it was not available on Hotel Tonight for the following evening. After starting my morning by visiting the beautiful city of Bruges (site of the humorous Colin Farrell movie 'In Bruges'), I fired up HotelTonight again to look for a new place. I had used the TPG discount code the night before (new users can enter the code BKELLY99 for a $25 credit), so I couldn't re-enter it, but there seemed to be some reasonable options available for this night. After consulting with my friend Martijn about which ones he would recommend, I chose the Hotel Stanhope, a 5-star property (part of the Norwegian Thon Hotels chain) located near the Parc Royal and the Palais de Bruxelles, not far from the EU headquarters.

The room rate was listed at $361 (as it was categorized as a "Luxe" property), which was a bit more than I had wanted to pay. However, the other options available were far from the city and close to the airport, so I stayed away from those.

The hotel listed itself as a 5-star property with full amenities - sounded great, right? However, upon arrival at their side street main entrance, I found zero bellmen or door staff to assist me with my luggage, and the entrance did not have a ramp so I had to lug everything up stairs. Turning the corner, I found a very nice lobby - very European in flair and style ,replete with ceramic busts, marble floors and Old World grandeur.

At check-in, I was offered either a garden or street view, and given that I needed to get up early to make it to the airport, I opted for the garden view room so as to not be kept up by street noise. I took a claustrophobically petite elevator that was decorated with wall-to-wall with faux books (including such titles as "Rambo Saves The Day", "How To Cope With Staff Losses" and other quirky tomes) straight up to my room on the 5th floor.

Each room was named after former ruling kings and queens as well as aristocratic dynasties, so I had the "Windsor Room", #501 which was right by the elevator (which I usually prefer to be away from). It was still quiet enough that it was not an issue, though. The hallways were clean and bright and had a nice clubby feel to them with green, gray and gold accents.

I opened the door to find a very nice and light room around 250 square feet in size overlooking the central courtyard of the property, and although the view was not spectacular per se, it was very light and the windows opened to give some fresh air to the room.

Although there was nothing particularly outstanding about this room, it suited my needs for the night, and was pleasantly appointed. The queen-sized bed had older trim and pillows which looked dated, but it was still comfortable nonetheless. WiFi was not included in the Hotel Tonight deal, but I asked if it could be thrown in since I had just booked and needed it badly...a wink and a smile can get you far sometimes!

A small desk with pull out bench as well as an armoire with a luggage stand completed the room. One odd quirk was that the door to the room did not close automatically, so when you shut it, you needed to make sure that it closed completely. Not a huge deal, but something to note.

The bathroom was very nice and warm, and had amenities by Green Park, a hotel-specific division by British brand Molton Brown, and all products were in the refreshing Neroli and Cedar collection.

I called the front desk to ask for a wake-up call and the next morning before the call came in, my television turned itself on to wake me up, then I got the call from the front desk within a minute. It was a bit jarring to wake up to the news a la Poltergeist, but it did the trick.

Unfortunately, due to my time constraints, I was unable to eat breakfast at the hotel in the morning, but the restaurant looked nice, and the courtyard outside that my room had overlooked had some tables available to dine at as well.

All in all, even though it seemed a bit dated and the service was not quite as deluxe as Hotel Tonight would have you believe, the property was nice and worth a stay. It's not the hippest or most happening property, but it suited my needs and I would recommend it to others - though perhaps only if you can snag a better deal than I did. Have you visited the Hotel Stanhope, and if so, what was your experience like?
[card card-name='Starwood Preferred Guest® Credit Card from American Express' card-id='22034416' type='javascript' bullet-id='1']

Featured image by Entrance to the Hotel Stanhope, Brussels