Travel Tuesday Top 10: Things I've Learned So Far About Traveling With a Dog 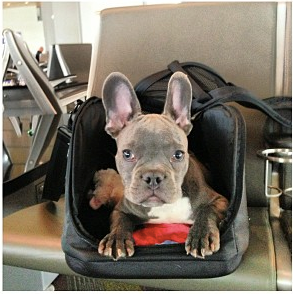 Travel Tuesday Top 10: Things I've Learned So Far About Traveling With a Dog
This post contains references to products from one or more of our advertisers. We may receive compensation when you click on links to those products. Terms apply to the offers listed on this page. For an explanation of our Advertising Policy, visit this page.

As I wrote about last month, I recently got a French Bulldog puppy and to date he has flown with me on 5 segments, 6,527 miles on three different airlines (American, Southwest and Delta). I was nervous about traveling with a pet for the first time since I took him with me in American's transcontinental business class, and stayed with him at some fancy hotels including the Park Hyatt Aviara north of San Diego, but I also learned a lot from the whole two-week-long experience, and now that we're safe and sound back at home, I wanted to share my top 10 insights from traveling with my pooch.

1. It's not as stressful for pets as you think: I think my major concern before traveling with my puppy was that it would be too grueling and tiring for him. After all he's just 4 months old or so and flying cross country, staying in strange places, dealing with a different time zone were all big factors. But he seemed to handle everything in stride. During our time at the airport and on the plane, I was within his sight at all times, and as long as he could see me or feel my hand on his travel carrier, he was absolutely fine. The same was true in hotel rooms - he was just happy to be wherever I was and it didn't matter that it wasn't at home. I did have a crate for him and he is still being housebroken, but constant attention and taking them outside for walks is key to avoiding accidents. That said, I think traveling in cargo under a plane must be very stressful on animals so I'm never going to fly him that way, especially because Frenchies can have breathing problems.

2. It wasn't as stressful for me as I thought: I'll be honest, I'm a totally overbearing father already (as you can see by my Instagram feed, which is bordering on puppy-obsessed)! I barely want to let Miles out of my sight, and I thought I'd have to take something in order to cope with the stress of traveling with such a young puppy, but I tried to stay outwardly calm in order to sooth him, and because he was being so calm, it actually soothed me. Sure, it involved extra time packing and getting through security, checking into hotels and getting his stuff set up in our rooms, but it was easier than I thought, and I was able to relax before long. Though the biggest hassle is not being able to wear my Bose QC15 headphones, because I'm still ultra-sensitive to not bothering the first class cabin- I wouldn't want to be in la-la land if he ever did start barking mid-flight (something he hasn't done and hope he never does).

3. It's expensive: Although in the back of my mind I realized people must have had to pay to bring their pets on a plane and board them in a hotel, before I got a pet myself, I don't think I ever really considered the expense of it all, however, just Miles tickets cost $125 each way on American and Delta and $75 on Southwest for a grand total of $450. Then there were the hotel bills: a $75 cleaning fee at the Park Hyatt (and that's just the cleaning fee, no damages or anything - he was a good boy!) and at the St. Regis it was a cool $150 one-time cleaning fee! If your dog is certified as a service animal or "emotional stress" dog, most of these fees are waived, which makes it much more affordable.

4. Budget extra time: I'm a last-minute packer and I'm often throwing things in my suitcase as I rush out the door, getting to the plane just as the doors are about to close, but that's not possible when traveling with a pet. Not only do I have to get all my stuff together, but I have to make sure Miles has everything he needs, from food and treats to his bed and any meds, and that his carrier bag is in order and I have my tickets and the confirmation for his ticket ready to go when we get to the airport. Plus, since he counts as my carry-on, I think I'll almost always have to check a bag, which means getting to the airport early as well- plus you can't check in online when you have a dog with Delta or American (Southwest did allow it), which means you need to go to the ticket counter and have them swipe your card and sign a couple forms. Not ideal if you are running against the wire to catch your flight.

5. Bring extra provisions: Traveling with a puppy is like traveling with a small child - you have to bring lots of extra just-in-case provisions with you. After doing some research on the subject, I made sure I had plenty of extra water and treats in case he got dehydrated or hungry, extra bowls just in case the ones I checked got lost, a little bit of his food (again, just in case his food got lost and I needed to feed him once or twice before I could get to the pet store) and extra toys. And I had to get all that into my one carry-on since his bag took up the space under my seat. I have so much more respect for parents who travel with children now!

6. There are other dog lovers out there: One aspect of all this I was really nervous about would be how fellow travelers would react to Miles. Granted, he was very quiet and well-behaved, but you'll always get dirty looks from somebody. I have to say, though, my experience was delightful. The flight attendants on my flights loved him and took him out to play several times, the doormen at the Park Hyatt asked if he'd like to take a walk around the lobby and wanted to pet him, as did the maids there, and even my fellow plane passengers wanted to get some pets and play with him. I respect the personal space of people who want to steer clear of animals while traveling, but in my one experience, nearly everyone I met was glad to have Miles along. Walking him through airports was like walking with an A-list celebrity. He loves the attention, but after a long flight I often want to get him outside to the pet relief area ASAP, so don't think I'm rude if you ever see me rushing through an airport trying to avoid eye contact!

7. It's tempting to get Miles certified as an emotional stress dog: As I mentioned in my first pet travel article, it's fairly easy to get your animal certified as an emotional stress dog, and it's very tempting to do so since, instead of having to jump through hoops to travel and pay tons of extra fees everywhere and adhere to size limitations on airplanes, you can pretty much get everything for free. The ethics of this are debatable and I haven't done anything yet, but it is still very tempting. While I play by the rules, on every flight there were certified stress dogs and the whole travel experience is much less stressful for both the pet and owner since they can be out of their carrier and don't have to worry about any fees or extra reservations or dog quotas.

8. You can get some loyalty benefits: Although you usually can't get miles for pet travel, certain airlines do offer points or discounts, like JetBlue's JetPaws, which awards 300 TrueBlue points on each flight segment when traveling with your pet.

9. Get a hotel room with a balcony: It might seem like a small thing, and I rarely use a hotel room's balcony on my own, but traveling with Miles, I realized what a great benefit having even a little outdoor space could be. It gave both of us a place to get some fresh air and for him to wander and look at the landscape to see what was going on around the hotel, and it also made for a quick escape when he almost had a little bathroom accident.

10. Having a dog makes your life better. I knew I was going to love having a dog, but I didn't realize just how much how quickly, but I'm already hooked and want to take Miles everywhere possible. Sure it changes my planning requirement, schedule and possible destinations, but it also makes traveling (and life) that much more rewarding, which is better than any miles or points in my book.