United's Longest Domestic Haul: A Review of the 767-400 in First Class From Honolulu to Newark 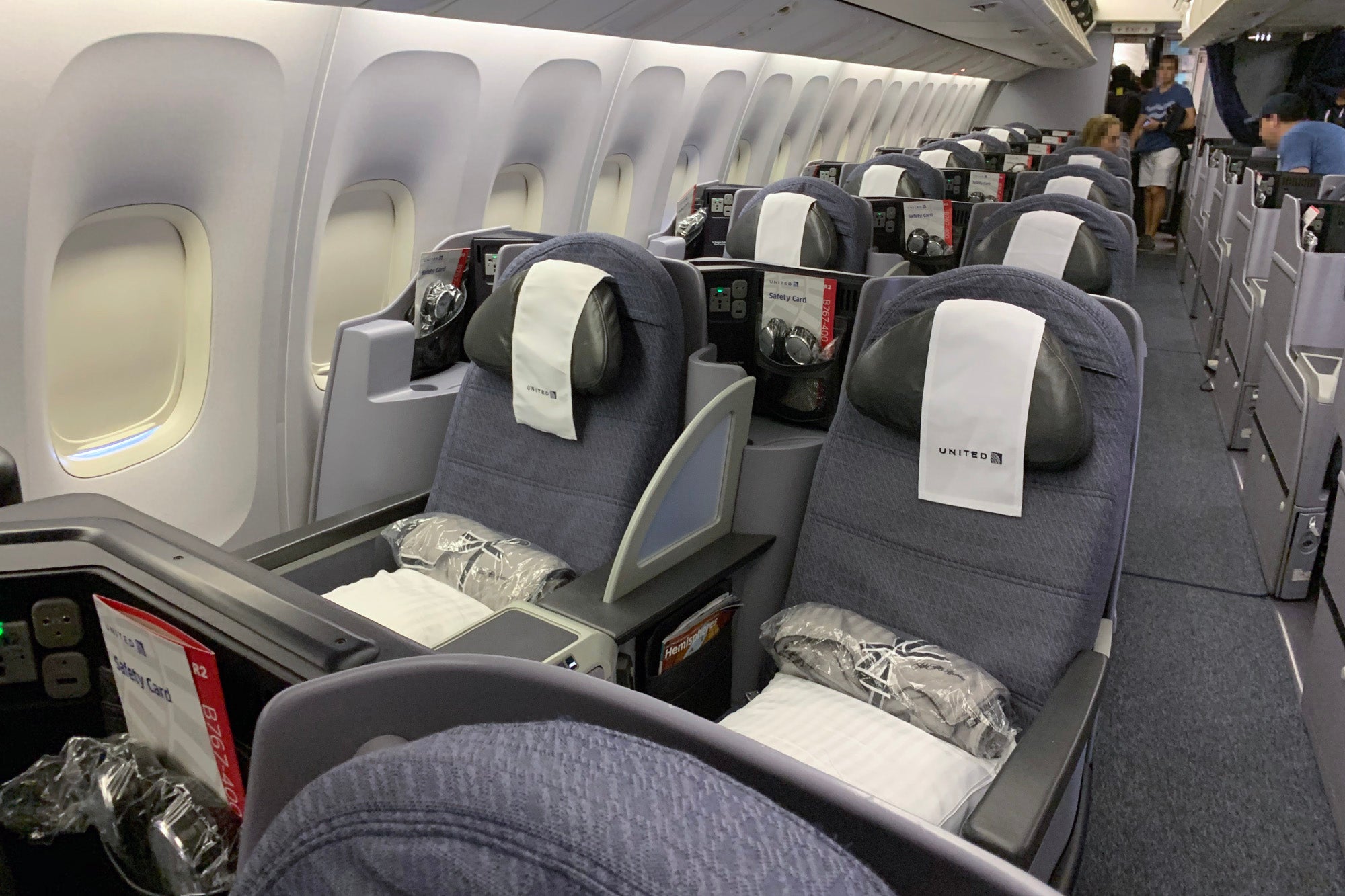 United's Longest Domestic Haul: A Review of the 767-400 in First Class From Honolulu to Newark
This post contains references to products from one or more of our advertisers. We may receive compensation when you click on links to those products. Terms apply to the offers listed on this page. For an explanation of our Advertising Policy, visit this page.

Earlier this year, Hawaiian Airlines launched the longest domestic US nonstop flight, carrying passengers some 5,000 miles from Boston to Honolulu. United has long operated a similar — though slightly shorter — flight, with daily Boeing 767-400ER between its East Coast hub in Newark, New Jersey, and Honolulu. And following my journey on ANA's Flying Honu, that's exactly how I decided to get home.

For the time being, you can theoretically book a lie-flat seat on United's 767 nonstop between Honolulu (HNL) and Newark (EWR) for 40,000 miles, worth $520, based on TPG's valuations. That's a hell of a deal — if you can find it. Most likely, you'll need to redeem at the Everyday level, which means burning far more miles — 95,000 is the cheapest I've been able to find, and rates may climb even higher beginning Nov. 15.

In this case, adding this flight actually made my ANA business trip cheaper — that one segment from Tokyo (NRT) to Honolulu alone would have cost $5,500 in business class, but beginning the trip in Kuala Lumpur, Malayasia (KUL), and ending in St. Thomas (STT), US Virgin Islands, or San Juan, Puerto Rico (SJU), brought the cost down to $2,700, including a flat-bed seat home from Hawaii to Newark.

On the card front, we walked away with 13,705 Membership Rewards points by paying the roughly $2,700 fare with The Platinum Card® from American Express, earning 5 points per dollar (when booked directly with the airline or via Amex Travel, up to $500,000 on these purchases per calendar year), worth nearly $275, based on TPG’s valuations. I could have also paid with the Chase Sapphire Reserve card, which would have earned me 3x points on all travel and provided trip delay or cancellation coverage, which isn’t available with Amex’s premium card.

As a Premier 1K member, I had the option to take advantage of United's free same-day change at check-in, potentially giving me more (or less) time to explore Hawaii. It's hard to beat the appeal of a Hawaii-East Coast nonstop, though.

During the check-in process, it also appeared that my flight had been overbooked, with United presenting an option to bid for a travel voucher in order to give up my seat.

Since I had checked in through United's site (and had a boarding pass in my app), I headed straight to the gigantic TSA PreCheck line, which spilled out to the check-in area.

After a 25-minute wait in the PreCheck line, I was through to the open-air terminal. It's nice if there's a bit of a breeze, but parts of the airport can get quite warm on an especially hot day.

Fortunately, some areas are air-conditioned, so you can head indoors if you're not in the mood to sweat.

Lounge access is not included for United first-class flyers — even those on the airline's longest domestic flight. I had no trouble accessing the brand-new ANA Lounge as a Star Alliance Gold member, though, and even got to bring in a guest. I then made my way to the gate a few minutes before boarding to see if I'd be called as a volunteer, but the flight ended up not being oversold after all.

While the carrier has begun adding its new Polaris seats to the smaller 767-300ERs, the extended-length 400ERs still sport the previous-generation seats.

Personally, I find the older seats to be comfortable enough — they're not especially private, and window seats don't have direct-aisle access, but they're a decent option for the primarily leisure Hawaii market.

Interestingly, there aren't any lavatories at the front of this plane — there are just two available to first-class flyers, and they're at the far back of the cabin, just before coach.

Naturally, that creates confusion for economy flyers, who end up staring at lavatories that they're not supposed to use. Generally, they sneak up and use the premium lavs anyway, but the crew decided to block access with galley carts this time around.

Normally I'd choose one of the single center seats when traveling alone, but TPG's Zach Griff was flying back from Hawaii on the same flight, so we grabbed 8K and 8L in the very last row.

Row 8 can be a bit noisy and bright, being right next to the galley and lavatories, but it's worth the tradeoff for extra privacy, in my opinion. TPG travel editor Melanie Lieberman recommends grabbing a seat closer to the front, instead, though.

Seats in Row 8 are right next to the crew rest, which hosts alternating pilots throughout the flight. While their arrival and departure can cause a bit of a disturbance, I'd pick staring at a thick curtain over making awkward eye contact with a stranger any day.

Storage is fairly limited, aside from the overhead bins. I tend to keep all of my loose items in the small open area to the side of the seat, which is also where you find the power outlet, headphone jack and USB charging port.

There's also a small storage area underneath the ottoman — my overstuffed Tumi backpack didn't quite fit, but I was allowed to keep it there during the flight.

The seats on my flight were definitely showing their age, but I appreciated the simplicity of the controls — no fancy touchscreens to deal with here!

The seat was very comfortable in bed mode — aside from the departure meal and breakfast, I had no trouble sleeping for most of the flight. The cabin didn't have any dedicated air vents, though, which meant I was at the mercy of the crew when it came to temperature. Fortunately, it was just fine on this flight.

You just need to be mindful of the seatbelt airbag — I woke up a couple times after accidentally bumping into it during my sleep.

Although this was marketed as a domestic first-class flight, United did offer a full-size Saks Fifth Avenue pillow and blanket, which made it far easier to sleep on this long, eastbound red-eye.

Amenities were limited to the Sunday Riley hand cream and face spray and Murchison-Hume garment freshener, available in the lavs.

United also provided headphones, but they sounded awful. Definitely bring your own along for the flight, instead.

The airline is currently heavily promoting its support of the new Spider-Man film, which meant special napkins, amenity kits (on long-haul international flights) and a themed safety video, which played on the seatback's 15-inch screen.

United offered a large variety of films — I counted 209 — ranging from new releases to documentaries to classic hits.

The system was a bit dated compared to the newer Polaris product, but it still offered the essentials: on-demand entertainment and a moving map.

United supposedly offered Wi-Fi on this route, with reasonable pricing.

We couldn't get it to work, though — not a big deal considering I was planning to sleep much of the flight, but it would have been a huge inconvenience on the long daytime leg to Hawaii, especially if I had planned to work all day.

Shortly after boarding, a flight attendant came by with a tray of water and orange juice. Zach and I each asked for a mai tai, instead.

The service began about 40 minutes after takeoff, with another round of drinks — I ordered an Old Fashioned this time, which was served with a small bowl of nuts.

Dinner was served just over an hour after takeoff — decently fast, especially considering we were sitting in the last row. The options were chicken, beef or pasta. When I asked how they were prepared, the beef was described as "very soft," while the chicken came "with a brown sauce."

Not wanting to venture into "very soft beef" territory, I got the chicken, which I think was actually paired with a romesco sauce, along with green beans and grits. The chicken breast itself looked a bit scary, like something I might expect to be served on the International Space Station (or preparing myself), but it was actually moist and decently flavorful.

The feta-and-watermelon salad was fresh, too, and tasted great with the pomegranate vinaigrette.

Best of all, there were pretzel rolls!

Zach had preordered an Asian vegetarian meal, which ended up being a curry of sorts. It looked fine, but I preferred my chicken dish.

Dessert was served about 20 minutes after the main course. The ice cream and chocolate syrup came already divided into dishes to save some time in the galley, but the flight attendant topped it with whipped cream.

Breakfast was served 40 minutes before landing, giving us plenty of time to sleep.

The bread pudding and cinnamon roll were both delicious but decadent.

The fruit bowl was great as well — fresh and nicely presented.

The flight attendant serving our row was incredibly cheery and outgoing, which really made a difference, especially on a longer flight. The only complaint I have about the service is that the flight attendants seemed to spend all of their downtime chatting loudly in the galley behind us, which would have been quite disruptive if I hadn't been fortunate enough to have brought powerful noise-canceling headphones.

A red-eye on United's longest US haul probably doesn't sound like anyone's idea of a good time, but I just happen to love this particular flight. Sure, you won't be getting international-quality meals or top-notch wines — and the 767-400 sure is showing its age — but if you're hoping to catch a full night's sleep and wake up refreshed on the other side, this is one of your best options without leaving the US.

Our genuinely friendly flight attendant really helped seal the deal here. Nobody likes leaving Hawaii, but warm service can really help ease the pain of leaving paradise, if only until you pull up to the gate.