Buggy, Muggy Retreat: A Review of The Setai, Sea of Galilee 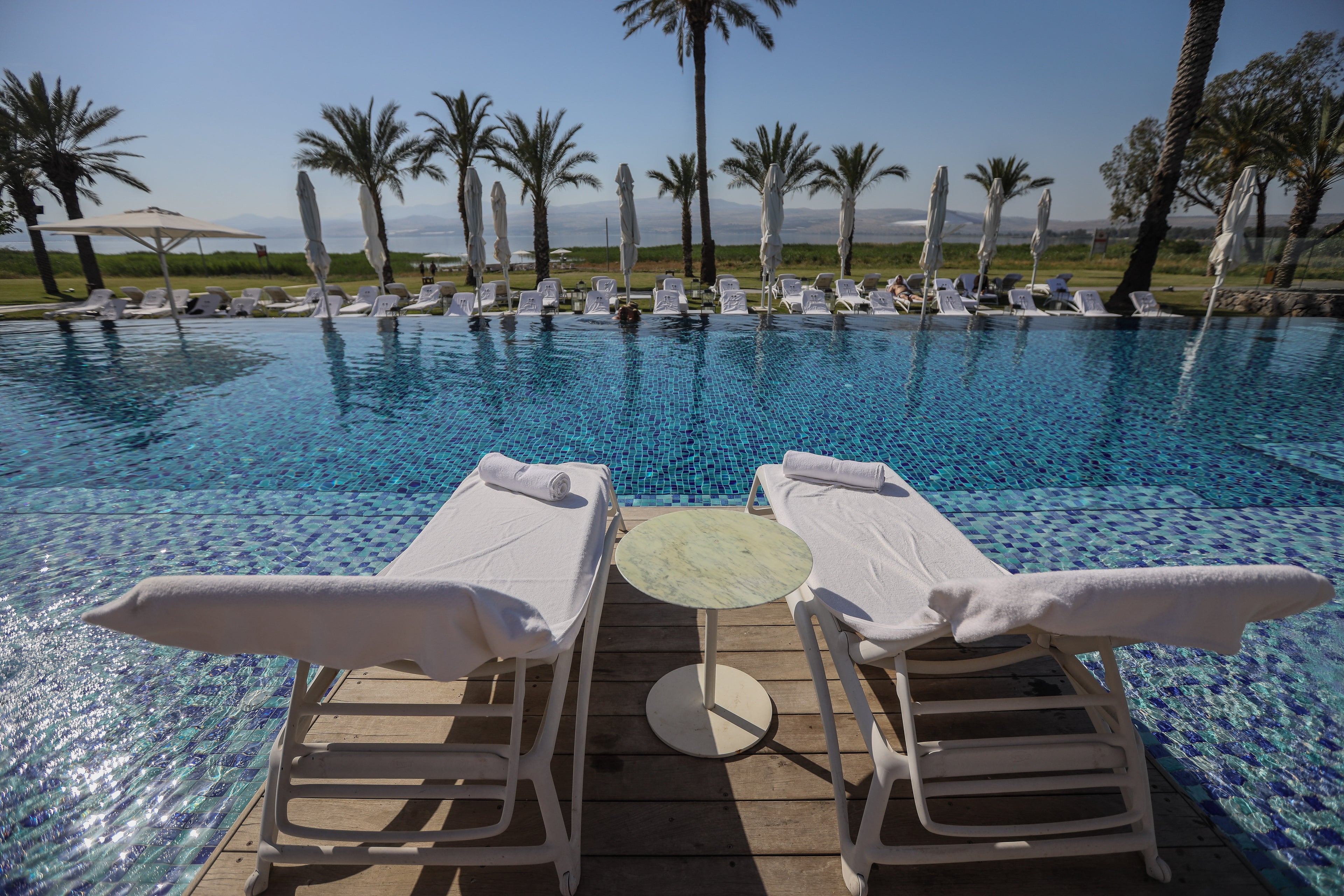 The Setai, Sea of Galilee, is set on beautiful Lake Kinneret on the edge of the Golan Heights in Israel. The hotel has recently been renovated and has 158 suites and villas. There actually aren’t many luxury hotels in this area of Israel to choose from, so when I wanted to visit those regions and the Dead Sea, I decided The Setai would be the perfect jumping-off point, especially since The Setai in Miami is pretty exceptional.

Room rates for a villa with private pool at the property typically hover around $700 per night, and standard rooms with hot tub start around $550.

As it turns out, the Sea of Galilee isn't a sea at all but rather Lake Kinneret, a freshwater body. The property is about two and a half hours from the Dead Sea and two hours from Tel Aviv.

I couldn’t really walk anywhere to dine or drink, so this spot is best for those wanting to spend a lot of time relaxing and dining in the hotel. If you want to explore the area, hire a driver or rent a car.

Here are TPG's tips for planning a family visit to Jerusalem: when to go, how to get there and where to stay on points.

I was warmly welcomed by staff in a modern, serene lobby with a fountain in the middle. After a long drive, I was thrilled to be in a space that radiated relaxation and smelled of fresh flowers.

Fruit-infused water, juice, Champagne and snacks were available for guests in the lobby.

I was offered a golf cart to my room but chose to walk, as I wanted to enjoy the fresh evening air. My villa (No. 233) was a short stroll away through a floral, landscaped path.

I had a ground-floor villa facing the water, but my views were limited by the trees and brush in the way.

While the property is directly on the lake, the villas aren’t, so adjust your expectations accordingly. The villas closer to reception have a clearer or view of the lake — and maybe the second-floor rooms have a better view, too.

The villa was spacious and had an open-concept living room and bedroom.

The living room had sofas and chairs, a desk area and a large TV.

Vintage photographs of the lake and surrounding area were aptly placed around the villa.

Sliding doors opened up to a deck and small, private plunge pool. But I use the word "private" loosely, as although it was for my villa only, there was a walking path behind the villa as well as a grassy area where anyone could see my pool and deck. I could see my neighbor’s decks and pools, as well. So while it was for my exclusive use, it wasn’t really private.

The bedroom had a large bed with two bedside tables and lamps. There were power outlets on both sides of the bed, and one side had USB ports.

A Nespresso machine was on the desk with capsules replaced daily, as well as a gift of a bottle of wine, sparkling water and two bottles of flat water replaced daily.

The minibar was also stocked full with drinks and snacks. It had Pringles, which is the sign of a good minibar, in my opinion.

The bathroom was open and had a double vanity, a large sunken tub and two small rooms, one with a rainfall shower and the other with a toilet.

The amenities were signature, but I didn’t love them. They smelled a little generic, and the packaging looked cheap.

The suite was generally comfortable, but for $700 a night, the furniture was a little tacky. I was annoyed that the closet had those hangers you couldn't take out. Cutting costs on a room then charging $700 per night just didn’t sit well with me.

The grounds were beautiful, and I loved that you could just grab any of the beach cruiser bikes and ride to your room or around the grounds.

The main pool was stunning, not too crowded and had beautiful views of the lake. There was a small beach where you could go in the lake, but it wasn’t particularly impressive -- it was rocky and gray, and the water looked a little gross.

There were a few paddleboards, but you couldn’t just use them on your own and had to call a private guide to reserve them.

The fitness center was nice, with some machines and weights and lots of windows with light coming in.

Inside were both male and female locker rooms, a sauna and an indoor hot tub and pool.

Treatment rooms were upstairs, and I had a massage there one day. However, I was asked to put on a strange pair of pantaloons, disposable boxer shorts that made things a little weird, as the masseuse had to scrunch them up and bunch them in order to properly massage, and they got oil all over them. I found this added step to be a bit strange, but my masseuse insisted I wear them.

The food at the resort was excellent. Breakfast (150 shekels, or about $40) was exceptional, with personally made shakshuka and a staff member making custom fruit smoothies and juices. Michal was one of the best staff members I’ve ever encountered at a buffet.

She made sure I had everything I needed and told me really interesting stories about Israel. Eating overlooking the pool and lake was relaxing.

The dinner buffet was also pretty incredible. The dessert spread was like nothing I'd ever seen before.

When I ordered room service, there wasn’t actually a menu. Instead, I called and they told me they could make about four or five dishes. I selected the beef, and it was excellent. So good in fact, that I didn’t mind a limited, spoken-over-the-phone menu.

Now for the negatives. My room was infested with mosquitos the first night. Housekeeping must have left the door open while cleaning, and swarms of the obnoxious creatures were all over the ceiling. When I called about it, maintenance spent about 20 minutes vacuuming the ceiling.

While I understood it was a rural, lakeside villa and there were bugs, the staff told me they had no bug repellent for guests or spray for the rooms. I couldn’t believe it. There wasn’t any bug repellent (or sunblock) at the pool, either, and the bugs were vicious, especially around sunset. For a hotel charging over $700 per night, bug repellent or room spray should have been provided if I asked.

There were also specific times of day where the on-site ATM was closed. And the property wouldn’t allow me to leave tips on my credit card, which I found annoying.

The Setai, Sea of Galilee, was a gorgeous property overall, with spacious rooms, friendly staff, delicious food and a beautiful pool. But the little things might keep me from returning. It’s really expensive, and for the price I paid, a mosquito-infested villa that refuses to provide bug spray didn’t agree with me, and the lack of privacy took away from the luxurious feel.

It is a beautiful escape, though, so if you go, make sure to ride the bikes and chill out by the pool. Just bring your own bug spray.

All photos by Nicky Kelvin for The Points Guy.