Park Yourself Here: A Review of Park MGM Las Vegas 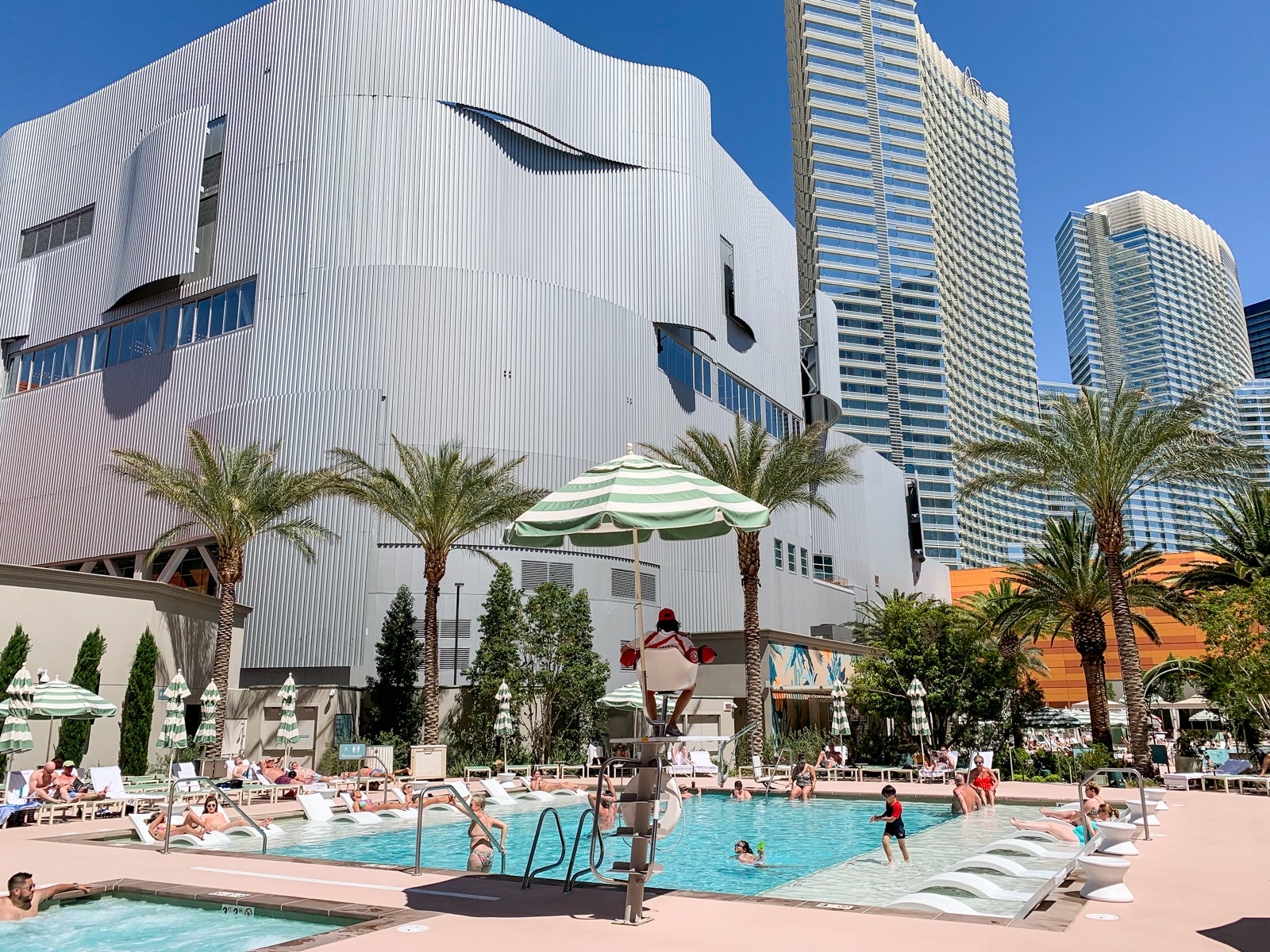 For over 20 years, the 32-floor Monte Carlo Hotel graced the Las Vegas skyline, a city known for its glitzy hotels and world-class dining. MGM Resorts International, which manages an impressive hotel portfolio including 10 major hotels on the Strip, announced in 2016 that the Monte Carlo would undergo a $550 million renovation, with the addition of new pools, a casino, a new state-of-the-art theater and even a small boutique hotel. Also a notable change: The name would be dropped and the hotel would be rebranded as the Park MGM Las Vegas, with its doors slated to open in mid-2018.

The TPG team had been eyeing sending someone out to Vegas and check out the new hotel, including the boutique NoMad Hotel, which now resides in the upper floors of the main building. So when we were piecing together some domestic stops for me to hit before jetting across the Pacific, a few nights in Las Vegas worked out perfectly with the schedule.

While these benefits are across the board for any LHRC booking, there are nuances in the way they are handled by each hotel. The Park MGM's free breakfast benefit came in the form of two daily $30 credits per person at the Primrose Cafe, the hotel's French-inspired restaurant in the lobby, while the "special benefit" was a $50 food-and-beverage credit to enjoy at any of the hotel's 11 restaurants, poolside bars or with room service.

More generally, the LHRC program is sort of like a more basic version of American Express’ Fine Hotels and Resorts program. Published benefits include:

While it’s not officially outlined, it seems that you’ll have access to the LHRC with the following Chase cards:

In total, we paid $697.50 for the two-night stay. While this might be on the pricier end for a four-star hotel in Las Vegas -- where hotel rooms are notoriously cheap -- I was booking this stay only the day before I was due to arrive, so the last-minute price premium was expected.

The massive Park MGM complex is right on Las Vegas Boulevard, across from its sister property, the MGM Grand. Vegas isn’t a very big city -- at least the typical tourist's stomping grounds -- so its rather central location makes the hotel walking distance to anywhere on the Strip.

After catching a 6:20am departure out of Newark Liberty Airport (EWR) and flying five hours across the country, I touched down in Vegas before the clock even hit 9am. With the haste of booking the stay the day before, though, I realized I had forgotten to call ahead of time and request an early check-in (a LHRC benefit), so I figured I'd just give it a shot when I arrived.

I pulled up to the curb of the hotel just before 10am and made my way into the lobby. The lobby design was bright and elegant, featuring a leafy-green natural ambience that built on the Monte Carlo's signature Monaco theme.

The hotel used self-service kiosks for its check-in process, which was a first for me, but I actually really liked it. Collectively, the 12 stations provided a bandwidth that kept the line moving quickly efficiently, even at peak arrival times.

As I was punching in my reservation information, a hotel staff member approached me asking if I needed assistance with anything, and I inquired about an early check-in. She explained that while they can’t accommodate requests on the same day, the rooms are assigned first come, first served. In other words, they would go ahead to check me in, and my name would be added to a list of guests waiting to be assigned rooms as they became available. And as a courtesy, she offered me a blank room key to access the pool areas while I waited, which I definitely took advantage of.

Slightly over two hours later, I received a text notification saying my room was ready -- a full three hours earlier than the standard check-in time. I was stoked.

Continuing the bright ambience from the lobby, the room had a fresh and trendy feel to it, with a heavy dose of bright red and orange accents. The art and decor were tastefully done and, as a whole, the room tied together pretty well. The king bed was flanked by a nightstand, lamp and power outlets.

There was a comfortable seating area with a couch, round, wooden table and upholstered chair. The 28th-floor perch offered great views of the Las Vegas skyline, and as an AvGeek, I particularly appreciated the clear view of LAS westbound departures.

The large Samsung television was mounted flush to the wall but had a convenient swivel for better viewing from the bed.

A small port station provided the ability to connect personal devices to the TV for viewing or even music streaming.

The bathroom was sparkling clean, complete with elegant finishings and the red-orange accents matching the bedroom.

The walk-in shower was spacious. The hotel uses Kuer products for its toiletries, including the standard shampoo, conditioner, body wash and lotion.

The closet wasn't particularly large but contained the usual safe, hangers, ice cooler and glassware. Notably absent from the room was a minibar or minifridge of any sort.

The Park MGM complex contained 11 restaurants and cafes. Primrose, the hotel's signature cafe took on a French-inspired ambience with chic decor and both indoor and outdoor seating. It was definitely the go-to breakfast spot, especially for guests like me with breakfast credits to burn. They didn't accept reservations -- it operated on a strictly first-come-first-served basis, with wait times often exceeding 20 minutes.

For those looking for a quick pick-me-up, they had a small counter serving coffee, juice and pastries to go.

The breakfast food was top-notch, serving the usual spread of American morning staples. Entree prices were reasonable, typically starting in the $15-to-$20 range. Bottomless coffee was available for $5, while the popular bottomless mimosas would set you back a whopping $26 (a single glass was $16).

For a more casual bite to eat, there was a full bar and grill on the pool deck, serving all three pools and delivering right to your lounge chair: anything from a strawberry daiquiri to a chilled tuna poke bowl.

The massive entertainment wing of the hotel was well-stocked with a variety of restaurants that were all considered on the property, meaning they were eligible for any food-and-beverage credits issued by the front desk, of which I had $50 to spend. You could find anything from a Starbucks to a casual noodle bar, a 1920s old-fashioned steakhouse to the beloved Eataly.

The Park MGM complex housed four pools, three of which were available to all guests and one reserved for guests of the NoMad hotel. The three main pools were all adjacent to each other on the primary pool deck, with the bar and restaurant conveniently in the center. They all had plenty of lounge chairs to go around, including some partially submerged in the shallow end of the pools. One of the three pools was adults only.

Probably the most popular attraction, as is the case with most resorts in Sin City, was the hotel's tremendous casino. The newly renovated space boasted over 900 slot machines and 60 game tables for blackjack, poker and the like. As per the custom in most casinos, so long as you were actively gambling, drinks were on the house.

Adjacent to the casino was the 5,200-seat Park Theater, which first opened its doors in December 2016 and has hosted some of the biggest names in the industry, including Bruno Mars, Aerosmith and even Lady Gaga’s current show, “Haus of Gaga.” She was holding performances both nights I was staying, which unsurprisingly brought in thousands of visitors through the hotel’s restaurants and casino.

The hotel had a fairly standard 24-hour fitness center, which offered everything you’d need: cardio, bikes, free weights and even a yoga room. It was clean and definitely got the job done.

For those seeking me-time, there was a spa adjacent to the fitness center that offered the standard selection of sauna and massages. They even had a convenient salon catering to both men and women for haircuts and touch-ups.

The brand-new Park MGM hotel definitely holds its weight on the Las Vegas Strip. As a four-star hotel with fairly reasonable prices (if you book in advance), it offers everything you’d ever need for your Vegas getaway: chic rooms, delicious food, relaxing pools and no shortage of in-house entertainment. And when you're keen on stepping out and exploring the Strip, the location puts you within walking distance to just about anywhere you need to go.

Featured image by (Photo by Javier Rodriguez / The Points Guy)
Editorial disclaimer: Opinions expressed here are the author’s alone, not those of any bank, credit card issuer, airline or hotel chain, and have not been reviewed, approved or otherwise endorsed by any of these entities.