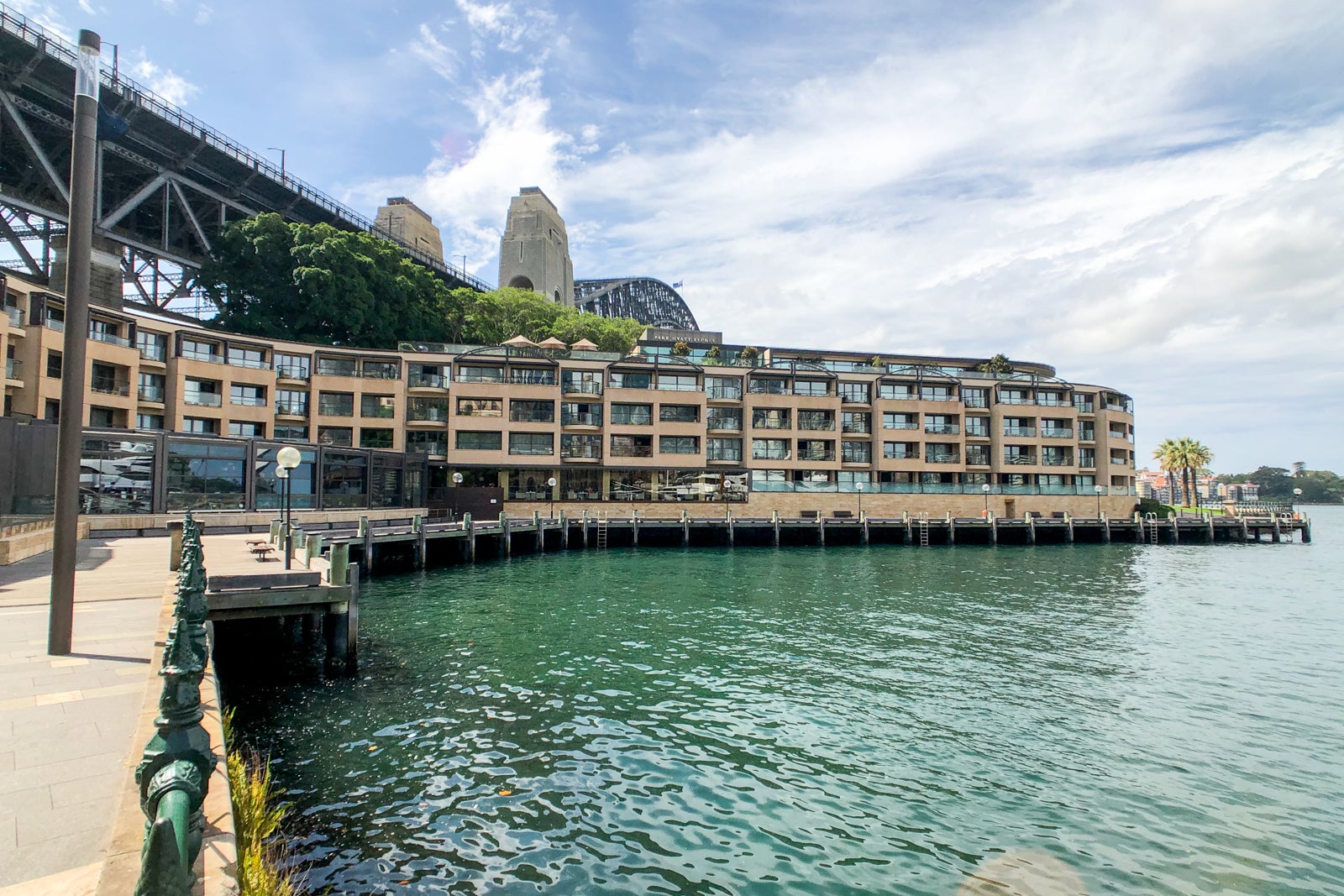 The Park Hyatt Sydney is among a cadre of aspirational hotels that many points enthusiasts want to check out someday, along with the likes of the Conrad Bora Bora, Al Maha in the United Arab Emirates, the St. Regis Maldives and the Alila Ventana Big Sur in California. It's not that these resorts have buzzworthy names to check off on a points bingo card, it's that they offer unique experiences with an outsized return on the points you need to redeem given the otherwise very high cash rates.

The No. 1 reason travelers flock to the Park Hyatt Sydney, specifically, is the hotel’s location right on the city’s waterfront with unparalleled views of the iconic Opera House.

That’s why, when I found out I’d be covering the reopening of Australia to international visitors, I immediately checked for award availability at the hotel and used points to reserve a room for the first three nights of my visit.

Landing in Australia and checking right into a room with some of the best views in the city, if not the world, was just the kind of arrival I craved after years of missing this continent -- and it was a relative bargain to boot.

Now, after a couple of nights at the hotel, I can remember all the other reasons that I, along with many other Hyatt loyalists, continue to love this hotel.

Here are six reasons the Park Hyatt Sydney is still one of my favorite points hotels in the world (plus some drawbacks it could stand to look into).

New to The Points Guy? Sign up for our daily newsletter to learn more about points and miles.

The Park Hyatt is one of the fanciest hotels in Sydney, and also one of the most expensive. Room rates usually start at $800-$900 per night, which is pretty pricey, not just for Sydney but for, well, anywhere.

Take my recent stay after Australia’s reopening to international travelers, for instance. Rooms were going for $929 per night, which is not unusual.

But instead of even considering spending that much cash, I was able to book a three-night stay for 30,000 points per night, netting me a value of around 3.1 cents per point, well above TPG’s current valuation of Hyatt points at 1.7 cents apiece.

Beware, though, this will change as of March 22, when the hotel will jump to Category 8.

Thanks to Hyatt’s new peak and off-peak pricing and the category increase, you can expect to redeem between 35,000 and 45,000 points per night in the near future. That means award nights will be between 17% and 50% more expensive than they are now. But considering how much paid rates run, you can still get a great deal by redeeming points instead.

And of course, if you lock in a future stay before March 22 you'll pay the Category 7 award rates.

Call me a tourist, but I can’t help but love the Park Hyatt Sydney’s location in the historic and picturesque neighborhood of The Rocks, right under the Harbour Bridge and across Sydney Cove from the distinctive Sydney Opera House.

You can easily walk to attractions in The Rocks, like BridgeClimb, as well as to catch the ferries to Manly and Taronga Zoo from Circular Quay (not to mention trains and trams to various other points around the city).

The recently built-out entertainment and dining district of Barangaroo is also a short walk away, as are the office towers of the Central Business District. That said, prepare for a slightly longer car or public transport ride to trendy neighborhoods such as Surry Hills, Redfern and Paddington.

I remember my first stay at the Park Hyatt Sydney several years ago. Walking into the travertine-tiled bathroom, my jaw nearly hit the floor when I eyed the spacious, glassed-in shower-tub suite with an enormous mirror reflecting the harbor in the background.

It was like having an entirely separate, spa-like space within your room. Granted, it can get a little wet in there as spray from the shower splashes everywhere, and I don’t envy the housekeeping staff having to scrub these day in and day out.

But for hotel guests, stepping into the oasis-like enclosure after a day out in the city and slipping into a soothing bath in the soaking tub, or scrubbing up with citrusy Le Labo Bergamote 22 products under the powerful rainfall shower head, is like bathing in a cleansing Sydney summertime storm. In a fabulous way.

One of the best perks of holding World of Hyatt Globalist elite status is a complimentary full breakfast (not just continental or buffet) for up to two adults and two children registered in your room.

This perk doesn’t apply to room service at the Park Hyatt Sydney, but you can pop down to its main restaurant, The Dining Room, to start your day with Opera House views and gourmet fare. The hotel reserves breakfast exclusively for in-house guests and it’s available from 7-10:30 a.m. Monday-Saturday, and from 7-11 a.m. on Sunday, which is a pretty long stretch.

The hotel puts out a small but sumptuous spread of fresh fruits, house-baked pastries like croissants and tarts, cereal with dried fruits and yogurt, and a selection of juices including orange, pineapple and a daily special smoothie.

What’s more, as a Globalist, you can supplement the buffet with an a la carte menu item like smoked salmon eggs Benedict or buttermilk pancakes with fresh berries, not to mention your choice of hot beverages like tea or cappuccino, all of which are included for free as part of your elite perk.

This benefit alone can save you hundreds of dollars on a stay, but it is also a delicious way to start your day … especially if you snag one of the window tables.

A small but incredible rooftop pool

Rooftop pools remain a relative rarity in Sydney, but the one at the Park Hyatt feels even more special thanks to its jaw-dropping location practically under the span of the Harbour Bridge, and postcard-worthy vistas of Sydney’s skyline.

It has also been nearly deserted every time I’ve been up there during all of my stays, which makes it an excellent place to relax without a crowd after a day of sightseeing (or surfing at one of the city’s beaches).

I don’t normally raid the minibar — after all, who wants to pay a 200%-300% markup on a bag of chips? But I will sometimes make an exception on a jet-lagged day to try locally sourced treats that I’d have a hard time finding back at home.

The Park Hyatt Sydney does a great job of stocking its fancy in-room bars — which are housed in mirrored cabinets for a touch of class — with a balance of international brands alongside Australian standouts. Examples of goodies you may find include Byron Bay macadamia nut cookies, Sud Polaire Tasmanian gin and vodka, well-known Australian wines like Brokenwood Semillon from the Hunter Valley north of Sydney and, a personal favorite, Moss Wood Amy’s Bordeaux blend from Western Australia’s Margaret River region.

A few things I wish could improve

As you can tell, as far as I'm concerned,the Park Hyatt Sydney continues to be a terrific hotel — all the more so because it has been such a spectacular redemption opportunity for Hyatt points.

That doesn’t mean it’s perfect, though. Not to nitpick, but here are a few facets I’d like to see improved or updated before my next visit (because you know I’m coming back!).

Although you can sometimes luck out and get a harbor-view room that looks over Campbells Cove (and if you lean out your balcony, you can spot the Opera House), most award redemptions seem, understandably, to book into the starting category of rooms.

Those face Hickson Road without a view of much of anything. If you want those iconic, watery panoramas, you might be out of luck on an award redemption.

These days, every new international luxury hotel seems to have universal power plugs, but not many in Australia, including the Park Hyatt Sydney.

While plentiful USB ports in the guest rooms can help you keep the majority of your electronics charged, you’ll need to remember to bring your adapter along to plug in larger devices like computers, which is a pain at such a high-end hotel.

Not long ago, Australian hotels were notorious for charging over $20 a day for internet access. At least that’s no longer a problem, and Wi-Fi at the Park Hyatt Sydney is free for guests.

But it’s one of those networks that automatically and periodically disconnects your devices unless you are actively using the internet, which can be a pain if you have to load and reload certain pages or keep connecting simply to use your social media on various devices.

Even after all these years, the Park Hyatt remains a spectacular option for redeeming Hyatt points on a luxury stay in Sydney. The hotel’s high price point means your Hyatt points can save you hundreds, if not thousands, of dollars even on relatively short stays. The property’s elegant amenities and the sophisticated service provided by the staff all remain world-class.

It felt like the perfect hotel stay to kick off my first trip back to Australia since the beginning of the pandemic, and I can’t wait for my next trip Down Under to book there again.

Featured image by ERIC ROSEN/THE POINTS GUY
Editorial disclaimer: Opinions expressed here are the author’s alone, not those of any bank, credit card issuer, airline or hotel chain, and have not been reviewed, approved or otherwise endorsed by any of these entities.