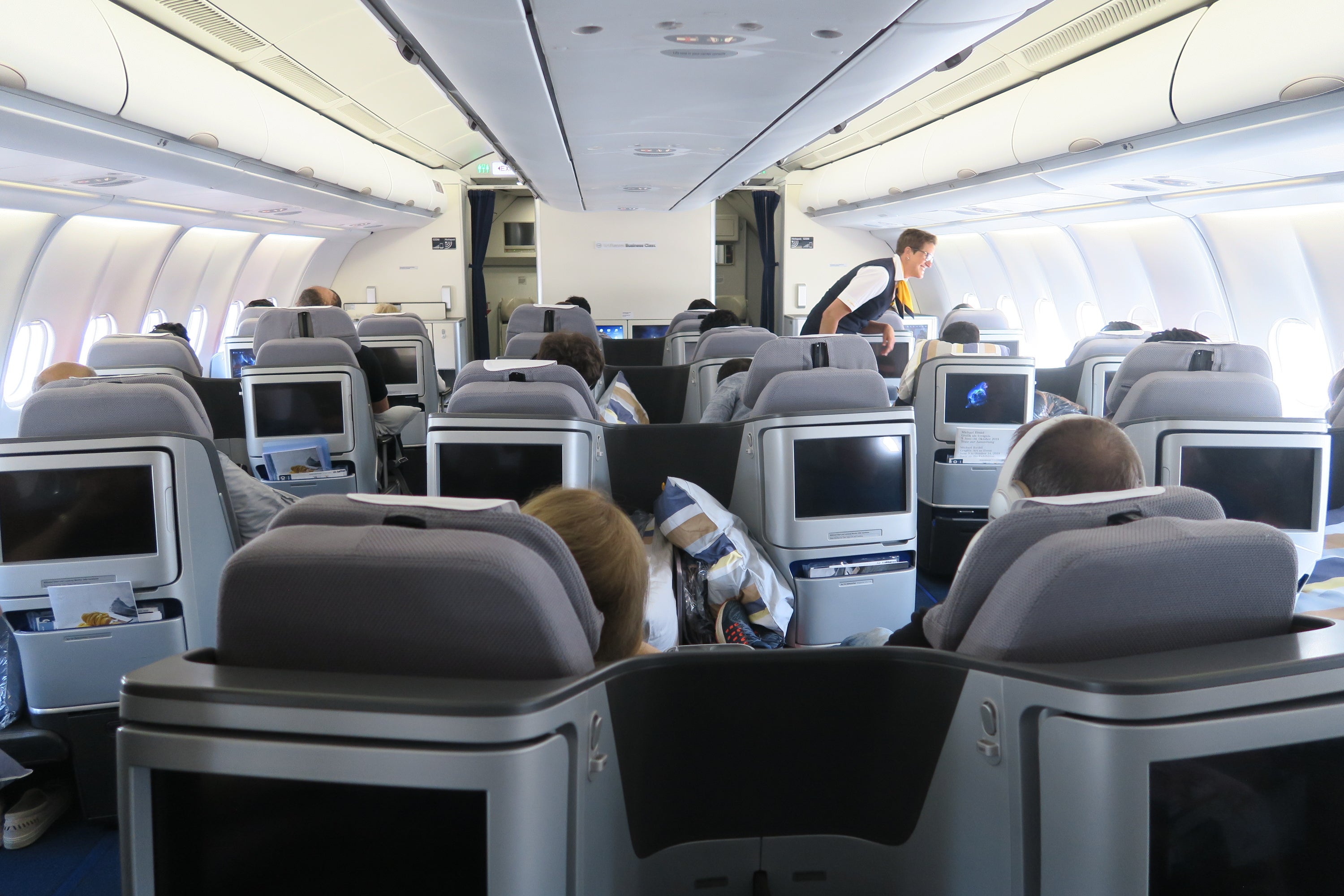 After spending a few months in Europe, it was time for my cat, Grace, and me to return to the US. Naturally, we wanted to do it in comfort and at a good price.

Because of Grace, I needed a pet-friendly airline that traveled between Madrid (MAD) and Atlanta (ATL) with no more than one stop and reasonable connection times. Lufthansa fit the bill, both in terms of schedule, relatively low transatlantic pet fees and award availability.

I booked my ticket at the last minute, when there wasn't any economy availability but many business-class seats, so I flew Lufthansa's A330-300X in business class from Frankfurt (FRA) to Atlanta. (The "X" denotes those A330-300s designed specifically for longer ranges and higher maximum takeoff weight.)

Award availability can be scarce, and paid tickets can be very expensive at the end of the summer season, but there were ample seats in Lufthansa business class on the dates I was considering.

I bought my business-class ticket using Avianca LifeMiles. The ticket cost 63,000 LifeMiles, which TPG's latest valuations pegged at $1,071. While I could have transferred all of the LifeMiles that I needed from Citi ThankYou Points, there was a promotion and a sweet spot that let me purchase up to 78% of the miles that I needed at just 1.5 cents per point.

First, my husband, JT, transferred 14,000 points from Citi to his LifeMiles account and then transferred them to me with a 100% bonus for a cost of $210. Then, I used these 28,000 LifeMiles and paid $550 to purchase the other 35,000 LifeMiles I needed for the redemption. I also needed to pay $74.02 in taxes and fees on the award ticket. I put the purchased miles as well as the taxes and fees on the Chase Sapphire Reserve in order to take advantage of the card's excellent travel protections.

I wasn't able to select seats until I reached the airport because, one, I booked my ticket less than 52 hours before departure (seat selection before check-in is only available up to 52 hours before departure), and, two, I couldn't check in online, since I was traveling with a pet. I probably could have called to get a seat, but based on the seat map, there were plenty of desirable seats still available.

Check-in at the airport took a while because of seat selection, verification of Grace's European Union pet passport and visiting a separate desk to pay the 100-euro ($115) pet-in-cabin fee. Luckily, I had access to the business-class check-in line, since the economy check-in line was long.

My connecting flight from Madrid arrived over an hour late. This meant I hurried past the Lufthansa lounges on my long trek from the A gates, through immigration and to Gate Z69. I arrived at the gate just 12 minutes before departure.

Since I arrived at the gate near the end of boarding, there wasn't much of a queue to board. Another passenger was in my seat (5D) when I arrived and asked me to switch to a less desirable seat. I politely refused and thought that was the end of it — especially once 5F successfully switched with 5K. However, shortly after the boarding door closed, a flight attendant approached me and said I could move to 10A and have a pair of seats to myself. I happily accepted this offer and moved to 10A for the remainder of the flight.

The middle-section seats had the benefit of aisle access for both passengers. and the storage area under the footwell seemed to be the largest for these seats. The downside of these seats was that the seats are angled inward such that the footwells for both seats were adjacent to each other.

The pairs of seats next to the windows were reminiscent of American's 757-200 straddle-or-be-straddled vibe. The window seats didn't have direct aisle access, so you needed to decide whether you valued aisle access or the relative privacy and view that came with window seats.

If you're leaning toward a window seat, note that these seats had the smallest storage area under the footwell.

The seats were narrow for business class at about 20 inches. Each seat had a small reading light built into its headrest. The headrest didn't have movable wings to support your head, but since the seat could lie flat, this wasn't an issue.

Despite the seat's narrow width, I could sleep comfortably on my right side facing away from the window or on my back. It was uncomfortable sleeping on my side facing the window because my knees hit the wall of the plane.

The tray table, which was large and sturdy, could be released from the center console.

By pressing a button and pushing down, the armrest could retract into the seat — but it didn't retract completely.

The IFE had a surprising number of movies, TV shows, music and games. There were also three live TV stations, CNNi, EURO and SPORT24, as well as special wellness and kids categories. In wellness were two airplane-specific videos: inflight meditation and a seated airline yoga class.

The IFE screen wasn't a touchscreen, so you had to use a remote in the center console to navigate. It was difficult at first to maneuver the cursor, but I got the hang of it within a few minutes.

Noise-canceling QC3 Bose headphones were provided in a compartment under the armrest.

These headphones were the type that sit on top of your ear. They were permanently attached to their compartment but could be unplugged from their two-prong socket if you wanted to plug in your own headphones instead.

At boarding, a pillow and plastic-wrapped blanket were on each seat. The pillow provided good back support but was also large enough to be a decent pillow for sleeping.

A bottle of water and an amenity kit also awaited passengers at boarding. These items were waiting in a compartment by the footwell for each seat.

The Reisenthel Collection amenity kit wins my award for most reusable: The "case" was a reusable, packable shopping bag.

It included: a blue, unadjustable, Lufthansa-branded eye mask with a nose flap and two bands on the back; a zip-top bag with a toothbrush, small tube of toothpaste, hand cream, "precious cream" and a breath mint; plastic-wrapped headphone ear covers; and cheap, plastic-wrapped earplugs.

Each of the business-class bathrooms contained soap, lotion and a box with mouthwash, razors with shaving cream and wet wipes. Another nice touch in the bathrooms: soft but durable paper towels.

Wi-Fi was available for $10 for one hour, $15.15 for four hours or $19 for the full flight. There were also a variety of membership programs that could provide access, including iPass and Boingo.

I considered using my Boingo account (it came with the Platinum Card® from American Express) but was scared away by a message saying Boingo would cost $0.23 per minute while in flight.

The Wi-Fi was surprisingly usable when compared with some of my recent Wi-Fi experiences on planes. Although most speed-test websites were blocked, Fast.com clocked the download at 3.4 MBps and the upload at 440 KBps.

Shortly after boarding, a flight attendant offered me a welcome drink of water, orange juice or rosé sparkling wine. Since I'd just hurried to the gate, I opted for water. Menus were distributed shortly before the boarding door closed by a flight attendant who introduced herself and welcomed me to the flight.

Forty-five minutes after takeoff, drink orders were taken and drinks were delivered with a small bowl of salted almonds.

Appetizers came after drinks. We could choose from: Asian roast-beef salad; spiced salmon with turnip celery salad, green pesto Frankfurt-style and pumpkin seeds; and goat cream cheese with mango salsa and arugula. I had the sliced salmon appetizer, which arrived exactly as described 70 minutes after takeoff. The salmon almost melted in my mouth.

Bowls of seasonal leaf salad with tomato, cucumber and wasabi dressing were offered from a tray 90 minutes after takeoff. The wasabi dressing was already on the salad, but frankly tasted more like ginger than wasabi.

The main course choices on this flight were: ragout of poularde with mushrooms, baby carrots and pea rice; prawns on Provencal vegetables with mixed rice; and ravioli with pesto and antipasti vegetables.

Main courses were served 95 minutes after takeoff. I ordered the ragout and found the chicken to be of good quality. The rice was spiced well and the carrots were tender and lightly seasoned. Trust me: The dish tasted better than it looked.

I got the ice cream and was expecting a sundae like in business class on some other airlines. Instead, I received a carton of ice cream on a plate. The mixture of chocolate and vanilla ice cream surprisingly had a layer of cherry sauce at the bottom.

About an hour and a half before landing, a smaller meal was served: minestrone soup; mixed salad with marinated Black Angus beef, walnuts, dried pears and macadamia-nut dressing; and seasonal fruit crumble cake.

As I was coming from Spain, the marinated beef reminded me of Iberian ham. The dried pears and walnuts went nicely with the salad, and the minestrone soup was pleasantly mild. It was also nice to see German pretzels as a bread option for this meal.

I found the meal service interesting, as the flight attendants often handed me dishes instead of placing them on my tray. A flight attendant also held out my selection of bread with tongs for me to grasp instead of depositing the bread on my bread plate. Neither of these aspects bothered me, but both were different than I'd experienced on other business-class flights.

Throughout the flight, the flight attendants periodically passed through the cabin providing water, apple juice and orange juice while inquiring whether passengers needed anything else.

Lufthansa had a hard act to follow, as I'd flown Qatar's QSuite a few days earlier. Despite this, I was generally pleased with my Lufthansa business-class flight. The flight attendants were friendly, the Wi-Fi usable and the seat comfortable. However, the plane's interior, especially the lavatories and IFE, felt aged, and the meal selections didn't live up to my expectations. While this product isn't on par with the best in the world, it's a solid way to travel between North America and Europe in comfort.

Of course, my experience would have been notably different if I'd had a seatmate. As much as I like having a window, I'd choose a seat in the middle section on future flights to guarantee aisle access without having to worry about my seatmate climbing over me to get out.