To Straddle or To Be Straddled: A Review of American Airlines 757-200 Business Class 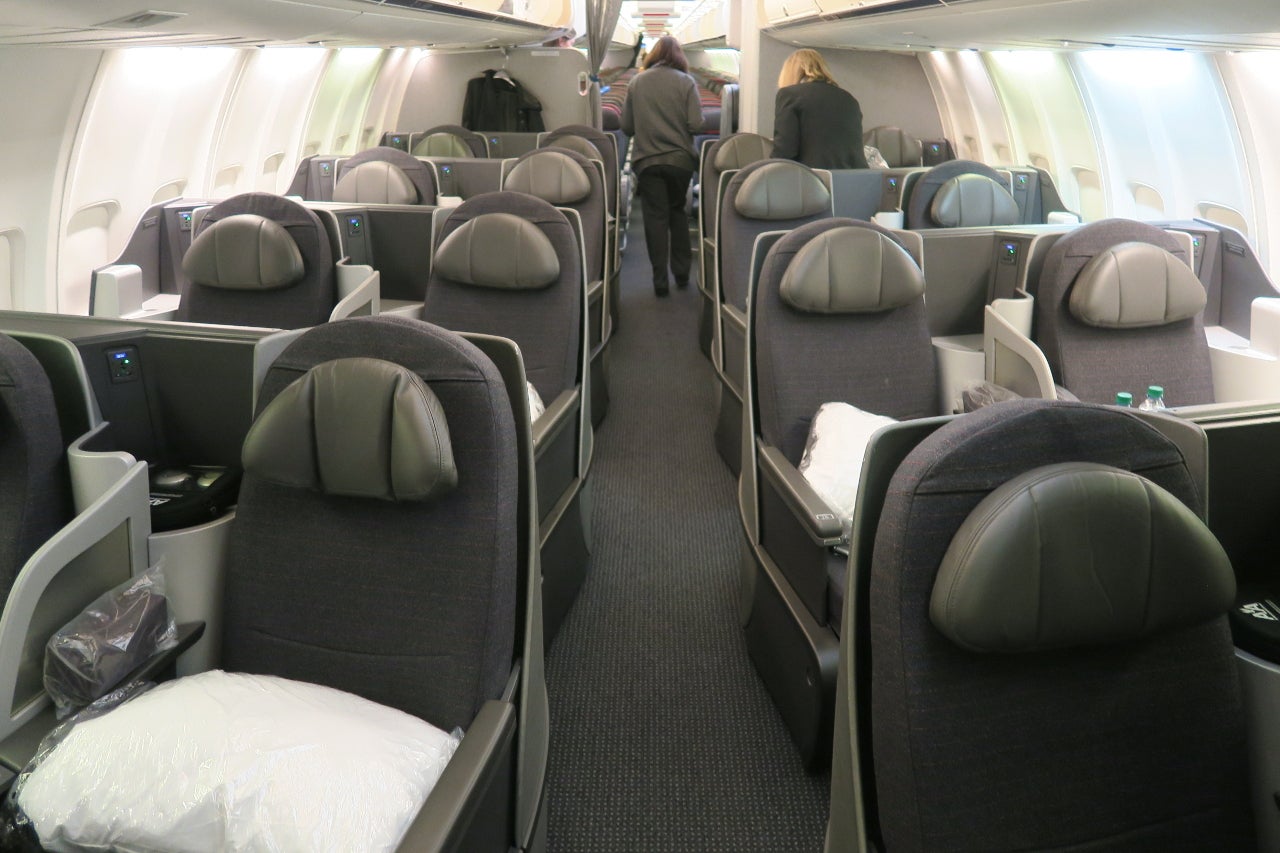 TPG himself wasn't impressed when he flew American's 757-200 business class product back in 2011, but American recently finished retrofitting its 757-200s that fly intercontinental routes with lie-flat business class seats. I'd tried these B/E Aerospace Diamond seats domestically on the airline's A321T, but I was excited to see how comfortable they'd be on a transatlantic flight — and I did, from Philadelphia (PHL) to Amsterdam (AMS) in American's internationally configured 757 business class.

I booked my round-trip ticket through American Airlines Vacations as a flight and hotel package. The package for flights and four nights of hotel cost $440.14. However, $405.21 of carrier imposed fees and taxes were added on for a total cost of $845.35.

No breakdown is provided regarding hotel and airfare costs, which is why booking through American Airlines Vacations is one way to get special fares. When airfare is cheap, booking special fares can result in more award miles and elite-qualifying dollars (EQD). In this case, I earned 1,014 EQDs and 11,138 award miles — instead of the ~500 EQD and ~5,500 award miles that I'd have earned if I booked just the flight alone through AA.com.

I started my journey in Houston, where the priority lines were mostly empty. Ticketing agents quickly checked in my luggage, printed my boarding passes and directed me to the nearest open TSA PreCheck line.

After connecting to PHL, I visited the Admiral's Club between gates A4 and A6A. I had access the lounge two ways: As an Executive Platinum elite or as a business-class passenger on this flight. This Admiral's Club lounge is really small, as we found out when we reviewed it, which meant there weren't many places to sit. Normal Admiral's Club snacks were on offer: two type of soups, hummus, carrots, olives, tomatoes, cookies and brownies.

The bar was awkwardly located in a small service window, but the bartender was friendly and I enjoyed a mini bottle of Mionetto Prosecco Brut.

Three 9:00pm departures were boarding at adjacent gates: One to Phoenix (PHX), one to Manchester (MAN) and mine to AMS. Boarding began on-time but without any announcement or group being called. I was the second person to board, so I can't say how the rest of boarding went — but bags did need to be gate-checked near the end of boarding.

I sat in 3F, a window seat in the third row of the cabin. Due to the 2-2 arrangement on a narrowbody aircraft, the cabin is tight. The seats themselves aren't very spacious, either, with just 21 inches of width and 58 inches of pitch.

Although less than what I've experienced on other AA intercontinental business class seats, the storage at these seats isn't terrible. There's a nook by the window that easily fit my phone, amenity kit, water bottle and headphones. There's a universal power outlet and a USB outlet in this nook.

There's also some room on either side of the seat as well. There's a small cutout on the left under the armrest as well as more space between the right armrest and the side of the plane.

Finally there's a long, flat area on the seat on front of you that works for storing a laptop while eating or sleeping. Granted, none of these storage spaces are supposed to be used during taxi, take-off and landing. This wasn't enforced on my flight though. Passengers were also allowed to keep backpacks and briefcases below their foot rests for take-off and landing.

A large tray table can easily be extended from a compartment on the side of the seat.

Although I found the seat comfortable enough for sitting and lounging, I could only sleep comfortably on my back. Although the armrest along the window can lower, it doesn't lower enough to be flush with the seat and the center console separating the seats makes it uncomfortable to sleep toward the other direction.

Not being able to sleep on my side was uncomfortable. But what was really uncomfortable was trying to leave my seat while my seatmate was fully reclined and sleeping. There's no graceful way of leaving the window seats — either you awkwardly wake up your seatmate and wait while they raise their seat or you awkwardly straddle them to reach the aisle.

The pilots kept the seatbelt sign on for the entire flight. There wasn't any notable turbulence though.

There was one lavatory for the business class cabin located at the front of the cabin. There weren't any special amenities available.

An economy lavatory is located directly behind 4A and 4C. I wasn't bothered by this, but I could see how passengers queuing just behind the curtain might be bothersome.

Amenity kits were waiting at each seat during boarding. These amenity kits contain socks, an eye mask, ear plugs, tissues, a pen, a toothbrush and toothpaste, mouthwash, headphone covers, lotion and lip balm.

A packaged full-size Casper pillow and comforter were waiting at each seat. The comforter was soft and warm and I appreciated having a full-size pillow when trying to sleep. Samsung Galaxy Tab 4 IFE tablets were mounted at each business class seat during boarding — they really look awkward in their allotted space, which is normally meant for a much bigger built-in entertainment screen. Strangely, they weren't plugged in, which meant their batteries were draining until you realized to plug them in. However, there was a friendly reminder to plug the device in after choosing a language on the device. Still, I can imagine many passengers quickly skip past this warning or assume the device is already plugged in. Once plugged in, my tablet reached and then stayed at 100% charge.

Although the overhead screens showed flight information between movies, the IFE tablets didn't have any flight information or maps. This left me disoriented when I woke up, as I couldn't easily check how much time remained in the flight.

Bose headphone were at some seats during boarding, but were passed out to other seats as boarding was concluding. The headphones were different from the folding Bose headphones I've received on other American business class flights, but I liked these more as the noise cancelling seemed to work better.

The IFE tablets and Bose headphones were collected by the flight attendants about thirty minutes prior to landing.

Panasonic Wi-Fi was available on this flight. A two-hour pass cost $12, a four-hour pass cost $17 and a fight duration pass cost $19. Speeds were frustrating though. Download speeds ranged from 1.56Mbps to 2.8Mbps and upload speeds hovered around 0.1Mbps. As I experienced during this flight, this type of connection works much better for syncing data to your phone than for trying to work online.

A pre-departure drink of orange juice, water or champagne was offered during boarding.

Menus were handed out during boarding. Departure meal choices as well as preferences on being woken for the arrival meal were were taken near the end of boarding from the front of the cabin backward. The departure meal main plate choices were:

The salad, appetizer and main course all came on one tray an hour after take-off. Serving all of the food at once was appreciated since the meal was served at 10:20pm Eastern time.

The buffalo skillet chicken was one of the best business class main courses I've eaten on American. The chicken was moist, the breading on the chicken was tasty and crispy and the corn cakes were well seasoned. In addition to the main course, each tray contained a poached shrimp rémoulade small plate and baby spinach and arugula salad. There were four types of bread to choose from, including pretzel bread.

My tray was taken away five minutes after I finished. The flight attendant took my dessert and post-meal drink order while removing the tray. The dessert options were caramel cone ice cream, a gourmet cheese plate or a raspberry tart. I ordered ice cream and coffee, which arrived two minutes later.

The breakfast service began five hours and 40 minutes after take-off, which was about an hour before landing. Breakfast options were:

I chose the traditional American breakfast, but found the meal to be bland and unappetizing. I will likely try to sleep through breakfast next time.

American's 757 is its only intercontinental business class cabin with lie-flat seats in which all seats don't have direct aisle access. The B/E Aerospace Diamond seats are comfortable enough, but they lack the space and width passengers might expect from an American Airlines intercontinental business class seat. This rightfully lands the Diamond near the bottom of TPG's round-up of American's premium seats.