Is First Class Worth It on Korean Air's A330? 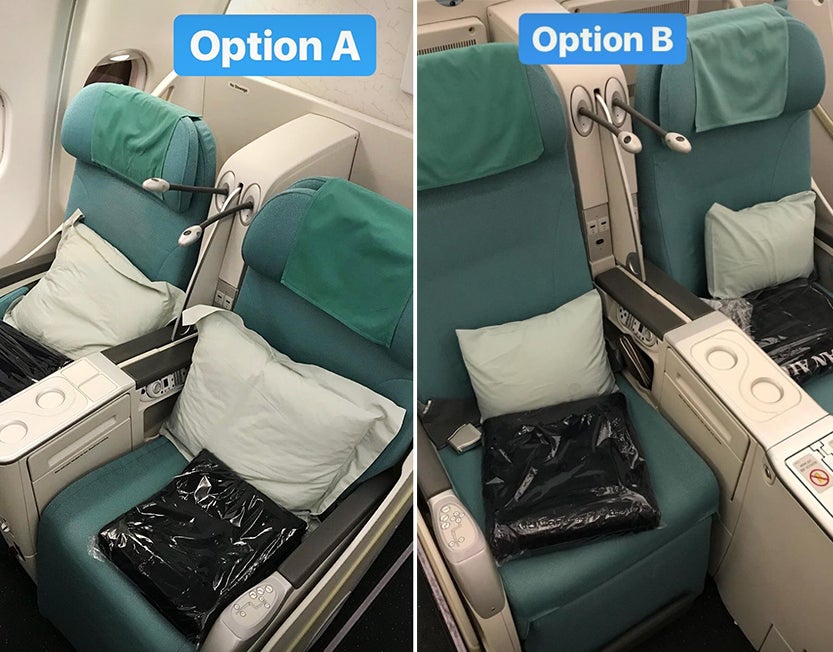 After a rejuvenating vacation at the Baros Resort in the Maldives, I was looking forward to flying Asiana A380 first class (stay tuned for full reviews of both!) home to NY, but I first had to get myself to Seoul, and Asiana does not fly to the Maldives. With that decision made, the next best option was Korean Air on its A330 from Male, Maldives (MLE) to ICN, with a brief stop in Colombo, Sri Lanka (CMB). Although I've flown Korean many times, I hadn't flown the A330 since 2015, and I figured it would be a comfortable ride. Awards were available, too — I splurged for first class even though the seats were basically the same as in business class. Read on to find out if it was worth it.

I was able to book the one-way in first class using 57,500 Korean miles and paying $100 in taxes and fees. I transferred Chase Ultimate Reward points to my Korean SkyPass account after verifying that there was award availability on my selected date. If I'd booked Prestige (business) class, it would have cost 45,000 miles one-way, and economy would have been 25,000 miles one-way for my off-peak flying date.

On this particular trip, I was flying alone, but remember that if you book award tickets for anyone else, Korean's rules state that you can only book in the name of certain family members: your spouse, children, parents, siblings, parents-in-law, sons-in-law, daughters-in-law, grandparents and grandchildren. You'll have to go through a lengthy process to register them too, so make sure to have some time on your hands when you book. It's also worth nothing that I've been asked in the past to show the credit card I used to pay the taxes and fees, so have it handy just in case.

The layout of Korean Air's A330 first class cabin is a single row of six seats in a tight 2-2-2 configuration. The seats have about 21 inches of width and 83 inches of pitch. The seats looked pretty much identical to the business-class seats, but there was a few more inches of pitch because the first class seats were set further back from the bulkhead.

One of the reasons I selected this particular flight was the timing. I left in the afternoon, stopped briefly in Colombo, flew overnight and then arrived in Seoul around 6:00am. This was perfect for me to catch my Asiana flight which was scheduled to depart at 10:00am. However, since the flight made a stop in Colombo, I had to get off the plane after the first leg of the journey. I spent a bit of time in a not-so-nice transit lounge at the Colombo airport for about an hour before re-boarding the same aircraft to complete the journey to Seoul.

I had the same window seat on both flights and was happy to find that I didn't have a seatmate for either leg. If I did, it would have been close quarters... though the seats are ideal for couples traveling together. The seat itself was fairly comfortable but on the small side — I fit, but it was a tight squeeze. Note, too, that Korean says these seats are completely lie-flat, but they're actually angled ever so slightly.

As I mentioned earlier, the first- and business-class seats on this aircraft are virtually identical. The only discernible differences are that the first-class seats featured a bit more legroom, a larger pillow was provided, and there was a supremely comfortable mattress pad reserved for first-class passengers. When it came time to sleep, I really appreciated the pad — it certainly aided me in getting a solid night's rest.

I changed into the comfortable pajamas and was able to get four or five hours of sleep, which was fantastic.

I have to say, the cabin was a bit quieter in first than it was in business since there were only six seats and just a few passengers, but, as you know by now, the seats themselves were virtually identical. Can you tell the difference?

The correct answer is option A — did you get it right? The only giveaway is the larger pillow.

The food on the flight was simply average, and it made me wonder about the quality of the food in both the business and economy cabins. On the first leg of the journey, I had a tasty lobster roll and a flavorful chicken croissant, but that definitely wasn't a healthy meal!

On the second leg, the meal started with a crab meat salad with tartar sauce and smoked salmon, which was a little dry.

I had a brief daydream about the caviar in Emirates first, then snapped back to reality. I was originally deciding between the spicy Bibimbap or the grilled beef tenderloin, but the flight attendants encouraged me to sample the seafood, which came stir-fried in hot garlic sauce with egg noodles and vegetables. I still couldn't decide between that dish and the Bibimbap... so I ended up getting both!

I have to say, it was a bit of a letdown. Dessert was a plate of juicy, fresh fruit and turned out to be the highlight of the whole meal.

After each meal, I was served toothpick and dental floss, which was a nice touch.

To drink, I had sparkling water and a glass of Perrier-Jouët Blason rosé Champagne, which I usually like, but this time it was a bit flat — perhaps it had been open for a while and stored as they turned the aircraft around in Male? Not a big deal, just an observation.

Although the food wasn't amazing, the service was great. The flight attendants were friendly and helpful. I've always had excellent service on Korean Air and this trip was no different.

There was a 15.4-inch LCD monitor for in-flight entertainment with a good selection of movies, though I mostly slept and did a bit of work. The aircraft didn't have any Wi-Fi, though.

I did appreciate the Davi amenity kit — it came with the usual suspects like an eye mask and toothpaste, but included some extra goodies, such as contouring eye gel.

Is First Class Worth It?

First class on this flight came at a premium of 12,500 points ($262.50 at our valuation of 2.1 cents per Chase points) over business class. Since my priority was getting sleep, this was totally worth it for me — as a first-class passenger I received pajamas, a larger pillow and very comfortable bedding. Korean Air does serve nicer Champagne in first class and the flight attendants in first really do go out of their way to make you feel special. However, the food was simply not up to par. If you're trying to save your miles, first probably isn't worth it to you, unless the mattress topper and Champagne are especially important. While I can't provide a full comparison because I didn't actually travel in business, if your primary concern is making the journey in comfort, it's probably wise to just spend the 45,000 miles required for business class and save those extra miles for a future redemption.