The Jabbrrbox: A (Hot) Lounge for One in the Middle of Chaotic LaGuardia Airport

Articles
Max Prosperi is a part-time frequent flyer and travel writer and full-time student. Based in St. Louis, Missouri, Max covers a variety of topics with a focus on points, miles, and aviation.
Follow
Nov. 05, 2018
•
8 min read 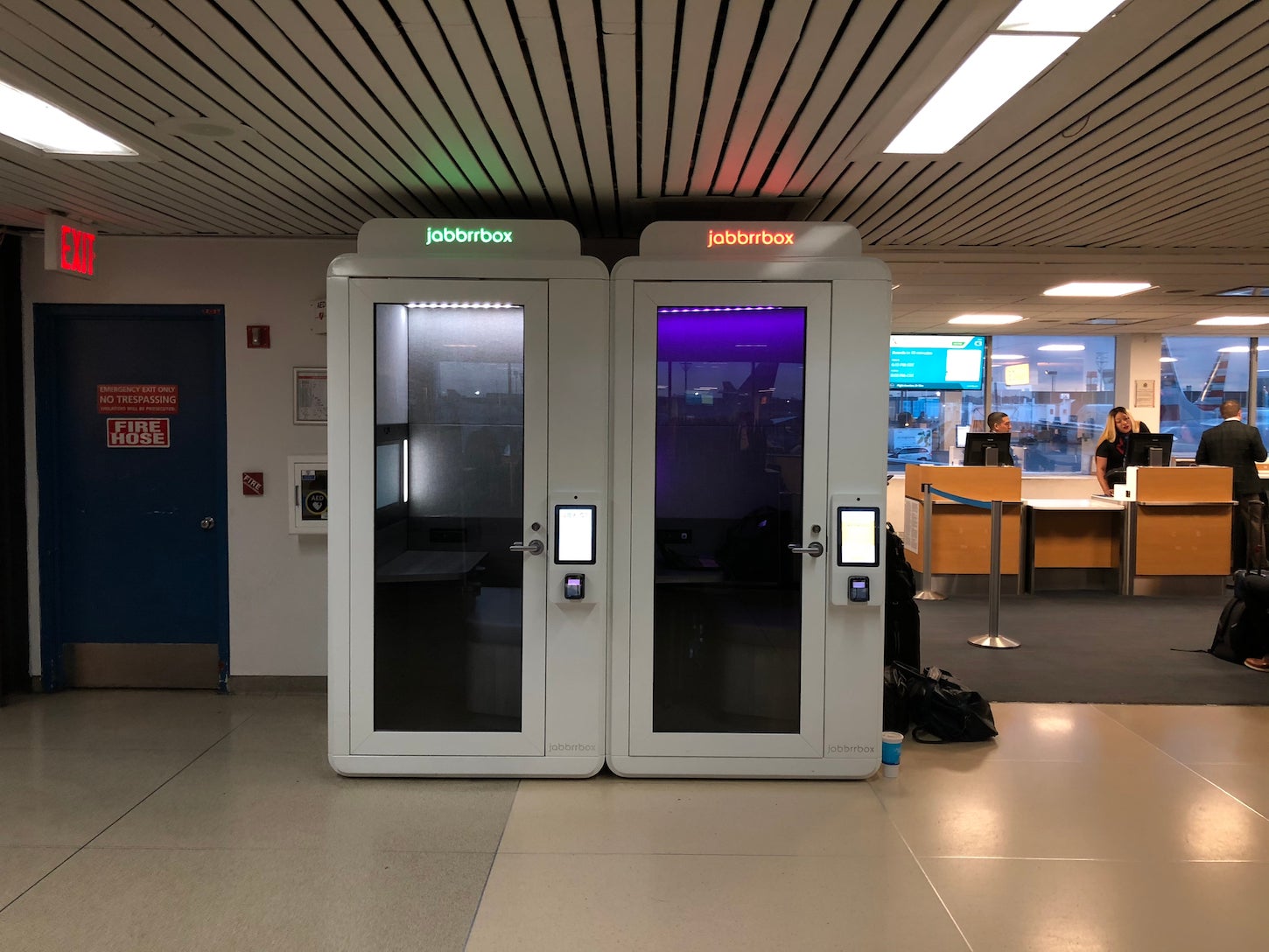 The Jabbrrbox: A (Hot) Lounge for One in the Middle of Chaotic LaGuardia Airport
This post contains references to products from one or more of our advertisers. We may receive compensation when you click on links to those products. Terms apply to the offers listed on this page. For an explanation of our Advertising Policy, visit this page.

If you've traveled through New York's LaGuardia recently, you were probably left with a rather negative impression of the airport. Aside from the fact that the Port Authority of New York and New Jersey, which owns the airport, is essentially building new terminals on the site of the existing ones, passenger amenities are scarce — and have been for years. And there hasn't been much in the way of passenger-centric development recently because of space and structural limitations.

The opening of the American Express Centurion Lounge in 2014 was the most recent passenger improvement, together with Delta's investment of $100 million in improvements at Terminals C and D. However, the recent construction at the airport has only exacerbated passenger woes. As construction on the new LaGuardia Airport ramps up, the passenger experience at the airport continues to get worse.

One noteworthy example of this is Terminal B's Concourse C. It's small, old, leaky, dirty and overcrowded. American Airlines is currently the sole tenant, after concentrating all of its operations at the terminal's Concourses C and D. This means that during peak hours, Concourse C is literally packed wall-to-wall with passengers coming and going.

For passengers traveling through Concourse C and seeking a more enjoyable experience, there are essentially two options at the moment. AA operates a cramped and dated Admirals Club in Concourse D while American Express operates the Centurion Lounge, prior to the security checkpoint. Neither option is conducive to efficient travel: You either have to take a crowded shuttle to Concourse D or leave the secure area.

I experienced the horror of Concourse C recently while I waited for my flight to St. Louis (STL). My flight was scheduled to depart around 6:15pm. I managed to get to the airport around 5pm. This meant that I had roughly 45 minutes to kill until boarding. While standard security was quite busy, I managed to get through TSA PreCheck in less than five minutes. This put me past security with roughly 35 minutes until boarding. I decided to grab a pretzel and find a seat to wait for boarding.

Unfortunately, there wasn't a single open seat in the entire gate area. I made my way over to the opposite gate, which was also quite busy, though I managed to find a fairly quiet space next to the faux plants that serve as the divider for the American Airlines' Admirals Club Service Center.

Once I settled in, I noticed two white pods adjacent to my departure gate. They looked like sleek futuristic phone booths. Atop each pod was the word "Jabbrrbox". The pods obviously piqued my interest. They were private workplaces, essentially a lounge for one. Jackpot, I thought.

Jabbrrbox, I found out later, is a fairly new startup founded by Brian Hackathorn, the interior designer responsible for creating the New York offices of companies such as Mashable and Dropbox.

Each Jabbrrbox was 40.5x40.5 inches with 80 inches of headroom. That's not a lot of space, but it's more than sufficient to get actual work done and even unwind. Pricing for a Jabbrrbox is as follows: $10 for 15 minutes, $15 for 30 minutes and $30 for 60 minutes, with a cap at three hours. The Jabbrrbox pod featured a locking glass door for privacy and security. This was one of my few complaints: the glass door was completely clear, providing little privacy. I wasn't the only one curious about Jabbrrbox: Maybe a dozen or so travelers stopped to watch me use the workspace. (I understand that if the pod featured a solid or frosted glass door, this could pose a security threat.)

Each Jabbrrbox featured a touchscreen panel mounted on the exterior of the pod. That screen was used to make reservations, as well as display current and upcoming reservations. The touchscreen was responsive and intuitive. I was able to make a reservation in less than two minutes.

Once I selected the duration of my reservation, I got a text and email with a code. This code was critical as it served as both the access code for the pod and also the Wi-Fi password. Armed with my code, I entered it on the touchscreen and within three minutes of arriving at the pod I was inside getting settled. The first thing I noticed was just how quiet the pod was. I assumed I would hear some terminal noise but to my surprise, there was almost no outside noise pollution. Instantly, it was as if I was in my own little world.

The second thing I noticed — and my other major complaint — was the temperature of the pod. It was hot. I had been traveling around nonstop for the past three hours and was already running quite warm. The air inside the pod was stagnant and seemed to bottle up the heat from around the terminal. I had to take a few deep breaths and really cool down before it began to feel remotely comfortable inside the pod. This could easily be avoided with the installation of a fan.

The most obvious component of the space was the large LCD touchscreen at eye level mounted in the center of the pod. The large LCD monitor acted essentially like a control panel and hub for all things Jabbrrbox. The monitor allowed me to change the color of the lighting, access the pod's Wi-Fi, check my flight's status, and even access a photo booth feature.

I took advantage of the mood lighting feature and even played around with the photo booth.

Other amenities included an AC power outlet, two USB outlets and a USB-C port. This was one of the most valuable features, as there is a chronic outlet shortage at LaGuardia.

In general, aside from the heat, I found the pod to be relaxing and comfortable. It allowed me to sit down and regroup. Jabbrrbox took me away from the hustle and bustle of LaGuardia and allowed me to focus. There was also plenty of space to unwind and store my bags.

I ended up spending just 10 minutes in the pod. I was impressed by the ease of access, comfort, design and functionality of Jabbrrbox, a mobile workspace for the worker on the go. A space to unwind and relax, it's a fantastic innovation that could greatly enhance the terminal experience for passengers.

Be on the lookout for new Jabbrrbox pods as the company plans to expand to additional airports by the end of 2018.

Related stories
Legislation that could gut credit card rewards set to move through Congress
Would you stay at 1 of these 8 haunted hotels this Halloween?
Southwest winter flash sale: Get one-way flights for as low as $29
You can currently buy points and miles with up to a 100% bonus — but should you?
Featured image by Jabbrrbox Seen Near Gate C3 at LaGuardia Airport (Image via Max Prosperi for The Points Guy)