A major league view: The pros and cons of staying in a room overlooking an MLB field 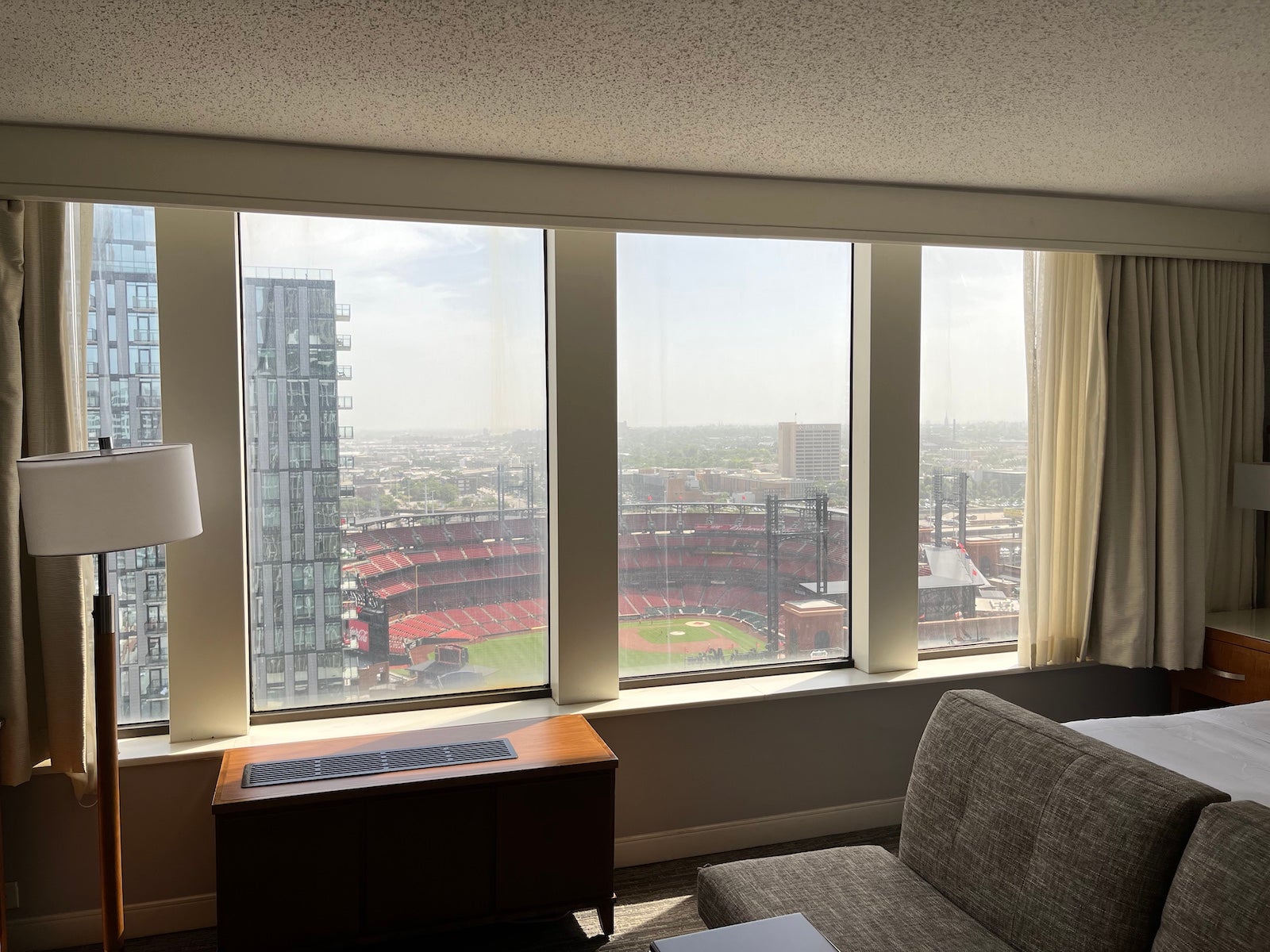 When the Toronto Blue Jays opened Sky Dome, the then-name of the team's monstrous ballpark with more than 50,000 seats, in 1989, the facility contained no shortage of revolutionary elements. Not only was it baseball’s first stadium with a retractable roof, but it also had a hotel literally integrated into the park so fans could watch a game from the comfort of their room.

The Baltimore Orioles similarly revolutionized the atmosphere in and surrounding a baseball park when the team opened Camden Yards three years later. The iconic warehouse in right field and festive game-day atmosphere on Eutaw Street set the scene for visitors while providing a blueprint that dozens of other Major League Baseball clubs could emulate over the following three decades.

Since these two stadiums debuted, other teams have worked to enhance the ballpark experience by creating "baseball villages" within steps of the field. As a result, numerous hotels have sprung up by ballparks — with some offering a full view of the diamond from select accommodations.

While Rogers Centre (today’s name for Toronto’s Sky Dome) remains the club known for dialing up the room-service experience by adding a side of baseball to it, there are now many choices for enjoying a game without stepping foot inside a ballpark.

But are hotels that face a ballpark worth it? I decided to test out a ballpark-view stay in one of America’s most storied baseball towns — St. Louis — to find out.

First impressions of the Hilton St. Louis at the Ballpark hotel

When you walk into the aptly named Hilton St. Louis at the Ballpark, it’s instantly clear that the hotel embraces its proximity to Busch Stadium. Despite being within walking distance of the city's most iconic landmark on the Mississippi River — the Gateway Arch — the property zeros in on the St. Louis Cardinals professional baseball team with its decor.

Related: The best things to eat, see and do in St. Louis

In the lobby, you'll notice a collection of baseball cards and portraits of icons who have helped the Cardinals to an illustrious history that includes 11 world championships. The game-day atmosphere is hard to miss while checking in, as you'll also likely see dozens of fans clad in red (the team's color) walking throughout the space.

Sign up for our daily newsletter
1 of 4
Hilton St. Louis at the Ballpark. (Photo by Sean Cudahy/The Points Guy)
0
1
2
3

After you enter your room, you'll immediately notice more of the same. The walls feature everything from black-and-white photos of former players to classic game-day memorabilia like a 10-cent program from the 1953 Cardinals season.

Although the curtains may be closed when you first open your room door (as was the case for me due to the extremely hot weather above 100 degrees during my stay), crank the air conditioning and open them straight away to enjoy as much of the phenomenal view of Busch Stadium as possible.

Know, though, that there are other places you'll want to check out during the game.

The best ways to take in the game

While you could easily spend the entire game in your room, you'd be remiss if you didn't kick off game day at this Hilton outpost’s best amenity: its rooftop bar. Overlooking both the Gateway Arch and the ballpark, including its surrounding Baseball Village amenities (think: bars, restaurants, entertainment venues and more), the Three Sixty bar offers an ideal game-day atmosphere. Even non-baseball fans are sure to enjoy the bar's 360-degree views.

I suggest coming here to settle in a half-hour or so before game time and staying for the first inning or two.

You could sit on the cushioned chairs and couches by the translucent railing and enjoy a happy hour of sorts thanks to the venue's selection of local beers, affordable wines by the glass and classic and elevated dishes, such as burgers, wings, pizzas, a charcuterie board and General Tso’s steamed buns.

Or, you could take in an equally stellar view from one of the stools lining the rooftop's edge, which is what I chose to do. As the game got underway, I could see the players, the crowd and the action on the field, though details like whether a pitch was rightly called a strike weren't as easy to decipher.

If I had one complaint about the rooftop bar, it’s that it continued to crank music at a high volume even after the game got underway. Given the tall buildings in the vicinity, I imagine the acoustics in the area would have allowed some of the ballpark’s ambiance to reach us on the roof had it not been overpowered by songs playing over the speakers.

Another potential downside was the lack of food available at the bar the night I visited due to the combination of high winds out on the roof and a corporate event on-site. This didn't end up being an issue for me, though, as I had already decided to return to my room for part of the game.

Before heading back, I decided to order some to-go food from the lobby bar, where the game (now in its second inning) was playing on the big screen.

The lobby bar offered a much more affordable selection of appetizers and entrees (prices in the $10 to $14 range) than what I'd get if I was eating in the stadium, so I was more than satisfied. Sure, pretzel knots and fish tacos in a hotel room are not the same as having a hot dog in a ballpark, but I couldn't complain about earning extra Hilton Honors points from food charged to my room.

With my food in tow, I made my way back to my room to catch a couple more innings. It was undoubtedly a much quieter scene than what I'd get in the ballpark, but the view couldn't be beaten. If you crave a little more ambiance as you watch, you could always put the game on your in-room TV so you have some crowd noise in the background.

Following my meal, it was time to check out the game inside the stadium. After all, if I'd come all this way to watch a game, I might as well experience at least part of it from the ballpark itself. That way, I could get the full effect while ticking another baseball stadium — No. 15, in case you were wondering — off my travel bucket list goal of visiting all 30 active parks in the league.

So, I made the seven-minute walk across the street to watch more of the game from the ballpark. From a seat on the park’s top deck, you can get a better sense of just how close the hotel is, as you'll see it just beyond left field.

While the views from the hotel's rooftop and my room were excellent, nothing quite compares to watching at least part of the game in the stands. From the crack of the bat to fans yelling, you really can’t ask for a better night — even if you’re not a diehard baseball fan.

Still, the hotel serves as a terrific option for those who are less concerned about ballpark ambiance. It's also great for families with younger fans, visitors with morning flights the next day and others who wish to leave early to avoid one of my least favorite parts of going to a sporting event: the post-event walk, traffic and ride home.

What to expect with pricing

Depending on when you stay at the Hilton St. Louis at the Ballpark hotel, you won’t pay that much more for a room with a ballpark view than you would for a standard room, even on a game night. This could be due to the fact that most other rooms offer views of the Gateway Arch, an equally desirable option.

For instance, you'll notice "stadium view" and "arch view" rooms on a night when the Cardinals are playing their National League foes, the Los Angeles Dodgers, have the same starting price of $340.

Know, though, that comparable properties in other league cities may charge more for stadium-facing accommodations.

This is the case at the Toronto Marriott City Centre Hotel by Rogers Centre, which has prices that nearly double when you book a view of the field that is, admittedly, far closer to the action than the hotel in St. Louis.

Since prices can vary by location, be sure to book as far in advance as possible to lock in the best rate possible.

This passionate baseball fan would tell you there’s no true substitute for sitting in a ballpark itself. You’re certainly not going to be able to replicate the ambiance of the game from a hotel across the street. However, staying at a hotel like the Hilton St. Louis at the Ballpark gives you a chance to really capitalize on the experience of all that goes into game day.

Whether you’re looking to bookend the game with pre- or post-game drinks with a view, save on food without missing all the action or simplify the logistics of your trip, watching players round the bases from a hotel can be a great way to enjoy America's favorite pastime.

Featured image by (Photo by Sean Cudahy/The Points Guy)
Editorial disclaimer: Opinions expressed here are the author’s alone, not those of any bank, credit card issuer, airline or hotel chain, and have not been reviewed, approved or otherwise endorsed by any of these entities.