Smells Like New Bus: The Inaugural FlixBus From Los Angeles to Las Vegas 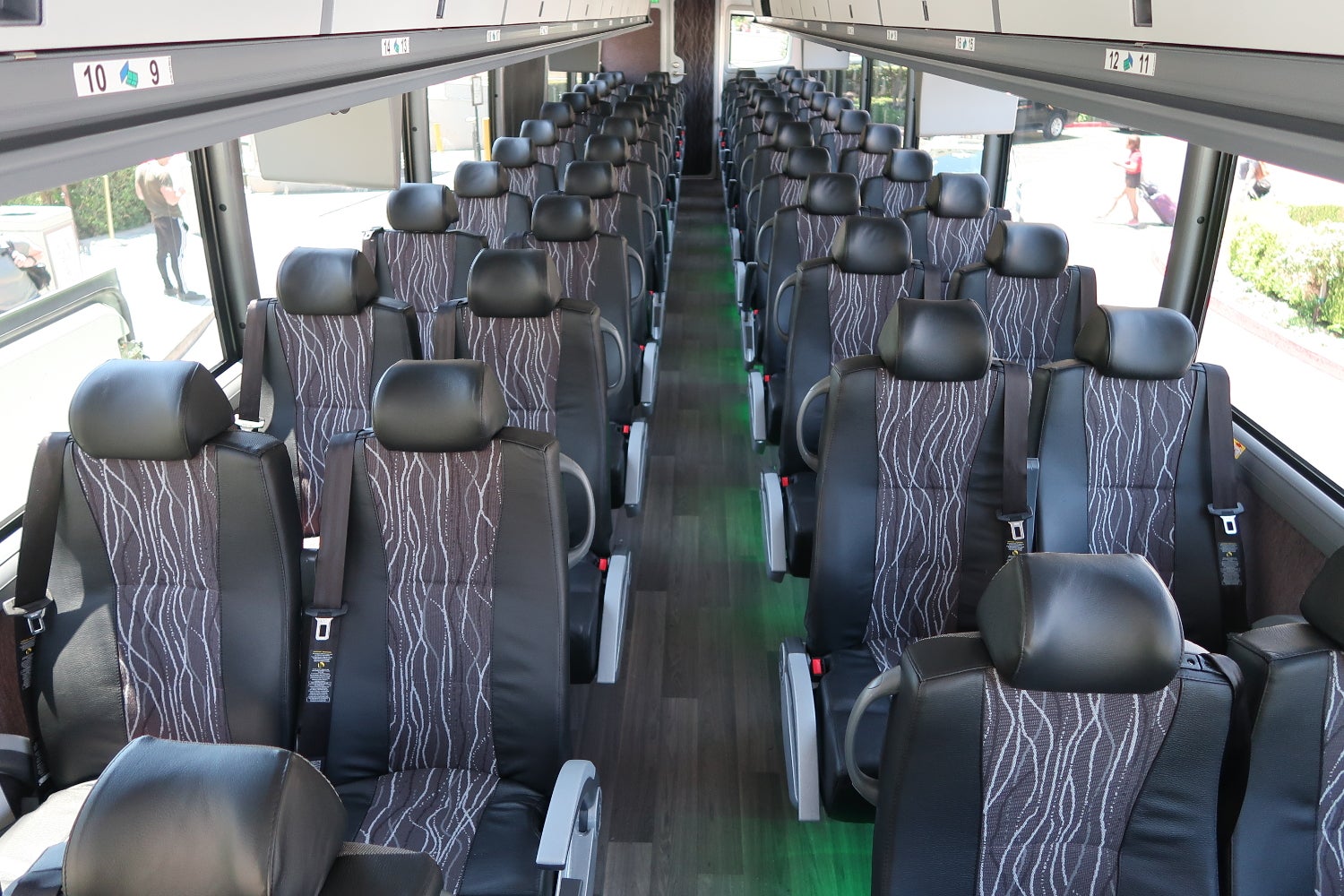 FlixBus, a favorite bus company among Europeans and those who travel through Europe on a budget, just launched US routes at the end of last month. I've enjoyed taking FlixBus in Europe, so I jumped at the opportunity to be on one of its first trips in the US. FlixBus launched many West Coast US routes on May 31, and I hopped on one that'd take me from Los Angeles to Las Vegas. Here's my take on the ride.

When I booked my ticket, FlixBus was running three buses daily from LA to Vegas. Since I wanted to be on the inaugural trip and board at the origin, I chose the 5:55am departure from the University of California, Los Angeles, in the city's Westwood neighborhood.

I booked my ticket on May 16, 15 days before departure. Although tickets on the LA-Vegas route were available for as low as $2.99, mine was $4.99, since I wasn't one of the first customers to book. All transactions had a $2 service fee, though, so the cheapest I could've actually gotten a ticket for was $4.99. I paid $6.99 total — still a great value. I booked the trip with my Citi Prestige card because of the extensive travel benefits the card provides. The purchase only earned me 1 point per dollar spent, but since the cost was so low, it didn't matter that I didn't earn any bonus points.

I boarded the FlixBus at its first stop, UCLA. Most passengers arrived early and used ride-sharing services to get there. About 12 passengers boarded at this stop, including a German news crew.

I've taken many FlixBus trips in Europe and Megabus trips in the US, but this was the first bus trip I'd been on where passengers didn't form a line at the pickup point. Instead, the passengers casually gathered once the bus arrived, 10 minutes before its 5:55am departure.

Passengers loaded their own bags into the compartment under the bus, and the bus driver checked tickets as passengers boarded.

Although the first six rows could be reserved and my booking confirmation said unreserved seats would be indicated by a green sticker, there was no way to tell which seats were reserved once we got on board. Hopefully FlixBus will start using the green stickers soon.

FlixBus doesn't own any buses. Instead, it contracts with independent bus companies to operate its routes. Because of this, I've experienced many different styles of FlixBus vehicles — some in Europe didn't even have a FlixBus wrapper. So I wasn't sure what to expect. I was happy when I saw the orange and green bus pull up.

I was even happier when I boarded and found a brand-new bus — complete with new car smell (or would it be "new bus smell"?).

The bus had 14 rows of four seats each, so it could seat up to 56 passengers.

The bus had overhead storage compartments that easily stored hand luggage like small backpacks. This is certainly an advantage over US Megabus vehicles, which don't have overhead compartments, meaning passengers must stow hand luggage at their feet. Note that the compartment was locked over some seats, though (seats 25 through 32 on my bus).

There was a US power outlet and a USB outlet at each seat.

Normal car-style seat belts — with a connected lap belt and shoulder strap — were at each seat. At the beginning of the ride, it was announced that passengers were required to wear their seat belts. This was also stated on the laminated information card left at each row.

Passengers could reserve particular seats while booking. Front-row seats were $4.99 each, while seats in rows 2 to 6 were $1.49 each. Seats in rows 7 to 14 couldn't be reserved.

I didn't reserve a seat. Instead, I moved around the cabin to try different seats. The seats were generally the same, except for the first-row seats, which had no footrest, less legroom, a small, immovable table with built-in cup holders and a small shelf under the table

Given these factors, the front row seats weren't desirable — save for the view out the front. Since the first couple of rows were on a mild slope, I would've chosen to sit in the second or third row to get a large tray table and footrest while still having a decent view out the windshield.

The seats were comfortable, although they only had 19.5 inches between armrests and 31 to 32 inches of pitch. Each seat could recline about 4 inches, although there were limited points at which seats could lock while reclined.

An information sheet at each row said that some FlixBus vehicles had seats that could shift into the aisle to create a separation between seats, but this bus wasn't among them.

On this trip, the free Wi-Fi had a 15 MBps download and 8 MBps upload, faster than many hotels and certainly better than I've ever experienced on Megabus in the US.

FlixBus offered an entertainment library though the Wi-Fi network. The selections were stored locally on the bus, so partaking of the movies, TV shows, audio and games didn't affect the Wi-Fi quota. The entertainment could be accessed through a web browser so, unlike Megabus, no additional app or software was required. I tried a few of the 24 movies, 10 TV shows (totaling 36 episodes), 10 audiobooks and 20 games. The selection was diverse, current and loaded almost immediately.

There was a chemical toilet at the back of the bus. There was no running water, but there was toilet paper and hand sanitizer.

Although the FlixBus website said that snacks and drinks would be available for purchase on board, none were available on this trip. However, the driver did say that that this service would be offered soon.

As this trip was the first FlixBus between Los Angeles and Las Vegas on its US launch date, a company spokesman gave a short welcome and introduced everyone to FlixBus at the departure point. Besides this welcome, the inaugural trip continued on with no special fanfare.

The bus stopped at two other stops in Los Angeles: the University of Southern California and Downtown.

There were two stops between Los Angeles and Las Vegas: Montclair and Victorville. One passenger was scheduled to board in Montclair, but no one was at the stop when the bus arrived 15 minutes late. After stopping and looking for the passenger, the driver continued. The bus didn't detour for the Victorville stop, since no passengers needed to be dropped off or picked up.

There were two Las Vegas stops — one on the Las Vegas Strip and one in Downtown Las Vegas. Almost every passenger exited on the Strip; only the German news crew and one passenger continued to the Downtown stop.

The ride was quiet and generally comfortable. As the bus was just under half full, most passengers were able to claim a row for themselves.

Although not listed on the schedule, the driver decided to take a 10-minute break just outside Barstow, California, about halfway between Los Angeles and Las Vegas, to make calls. Most passengers seemed to appreciate the opportunity to purchase drinks and food.

The five hours and 50 minutes between UCLA and the Las Vegas Strip (or four hours and 45 minutes between Downtown Los Angeles and the Las Vegas Strip) seemed awfully long. But when compared to the time and cost of traveling to and from the airport at the origin and destination, or the hassle and cost of renting a car, there is certainly an argument to be made for taking the bus.

In particular, taking the bus can be better when the route is relatively short and there's a bus stop near your origin and/or destination. Most visitors to Las Vegas stay on or near the Strip, so travelers save not only on the fare but also on the transport costs to and from the bus stop or airport.

Many different bus companies ply the route between LA and Vegas, so there's likely a departure that will fit your schedule. Personally, I'd take FlixBus again on this route thanks to the solid Wi-Fi and comfortable seating with overhead compartments and footrests.

FlixBus provides another transportation option in the US for budget travelers and those who want to enjoy the landscape of a road trip without actually driving. On this trip, I was impressed by the Wi-Fi speed, overhead storage compartments, footrests, large tray tables and new bus. These aspects — especially the quality Wi-Fi — will encourage me to book with FlixBus again when given the option. However, there are some downsides to the new service. Since FlixBus depends on independent operators, consistency could vary. Plus, although it wasn't an issue on this particular route, bus travel can be slow.