Tropical Dream: A Review of the Courtyard by Marriott Bali Seminyak Resort 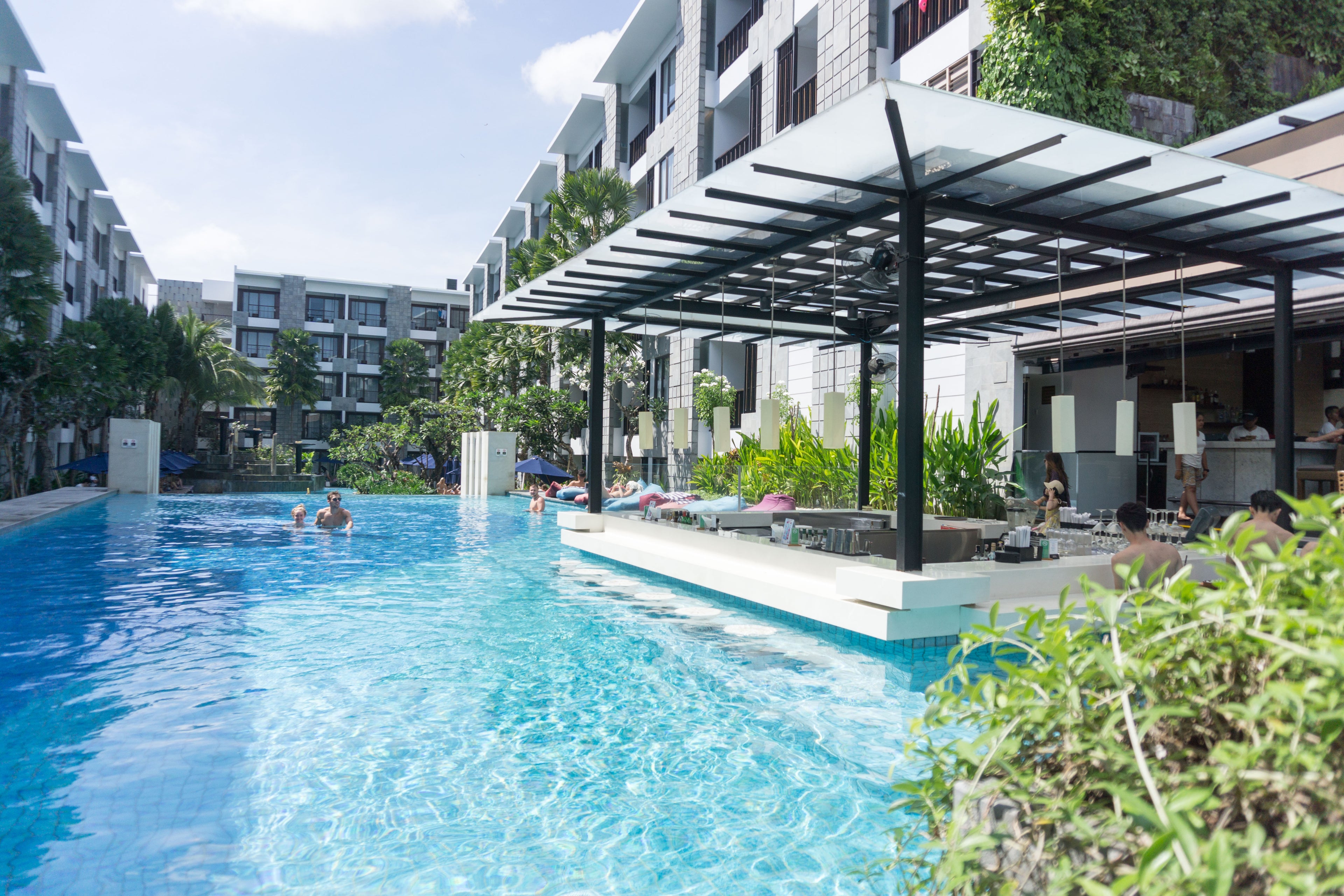 After some time in the Thai Islands, I arrived in Bali looking for a hotel with strong Wi-Fi that was relatively close to Denpasar Airport (DPS) and had Champions League final coverage on TV. On the SPG and Marriott apps, this Courtyard seemed like the best choice. When I usually think about Courtyard Marriotts, I think about drab, mediocre hotels in the suburbs of the US. This hotel had surprisingly positive reviews and ticked all my boxes, so I decided to give it a go.

Seminyak is known for large resorts, flashy beach clubs, nightlife and shopping. The Courtyard was right in the middle of the madness. It was about a seven-minute walk to the beach, and there were shops, bars, restaurants and convenience stores literally at its doorstep. Although this was my fourth visit to Bali, it was my first time staying in the area. While it was fun to stay in this area for a few nights, I highly recommend you check out other areas to get a more authentic taste of the island.

From DPS, a taxi was 250,000 IDR (about $20), but drivers tried to charge much more at the airport terminal, so make sure to negotiate! In the region, Uber sold off its operations to Grab, which I found worked with mixed success. The hotel also offered transportation on its proprietary shuttle at a cost of 350,000 IDR ($25).

Getting around Seminyak by foot was easy, but if you wanted to explore outside of the area, a scooter was the most convenient way to get around. A scooter was around 60,000 IDR ($5) per day, and a driver with a car was 500,000 ($35) a day. Beware, though, because the traffic was brutal. The Courtyard Shuttle also dropped off guests for free at two central locations in Seminyak.

After getting dropped off at the hotel, we had to run our things through security, including an X-ray machine, which is the norm in the area. The security staff was polite and the process painless.

Before checking in, though, I walked over to the pool and snapped a few pictures. A check-in agent immediately followed me and sternly asked me to delete my photos. The employee stood uncomfortably close to me and watched to make sure every picture was gone. I've had this experience at larger city hotels and on flights where it was deemed a security risk, though I did think it was strange at a resort-style hotel. [Editor's note: Security across Bali was increased after terror attacks in 2002 that targeted tourist sites and killed hundreds.]

The same employee who'd followed me changed his tune as soon as he saw my status at check-in, and the manager on duty came on to profusely apologize. He said that it was Marriott policy. He later gave us a free ride to the airport to make up for the faux pas.

The team offered us a choice of welcome drinks including local beer, juice or water. I had booked the cheapest room, which had a city view, and was upgraded to one with a pool view. They said the in-room TVs wouldn't have the channel showing the soccer match I wanted to catch, but they did suggest two nearby bars that would have it. I chose a plate of fruit and a Heineken for my welcome gift and learned about the 20% discount on food and beverages for Platinum guests.

The open-air lobby was perfect for Bali's tropical weather and opened onto a lawn that made a lovely hangout spot. Plenty of people were catching rays and enjoying the happy hour. There were also kids activities and table tennis in the lobby.

The room was done up in soft tropical hues and the basket-woven accents that Bali is famous for. The room overlooked the pool, and you could even hear the waterfall feature, which was soothing.

On the desk were chocolates, and just below the desk were international outlets. Right behind the desk was a small closet, a few drawers, an empty refrigerator and electric kettle. A menu listed snacks and drinks that could be sent to our room 24/7.

The bathroom was accessible via a sliding door, and was much more spacious than I expected.

It had a large rainfall shower and decent toiletries — I actually liked them a lot better than the toiletries at supposedly higher-end Marriotts and Westins in the States.

The balcony had a small couch and a view of the large pool, the centerpiece of the hotel.

The room was a comfortable place to relax, the A/C in the room was powerful, and the Wi-Fi was lightning-fast. A technician even came by to configure the TV so I could watch the Champions League match, which blew me away.

There was a highly rated spa called Zanti in the hotel, though we didn't use it. Next door was the gym, which was large and well-equipped with new machines.

Outside of the pool was an area with turf and bean bags that guests could relax on, a great place to spend the two-for-one happy hour.

The pool itself was massive and had an awesome swim-up bar. Being a family-friendly resort, though, it could get quite noisy during the day. There were activities for both adults and children, and a separate area for kids.

If you wanted to get out, there was a free shuttle to the center of Seminyak and the beach.

On our way out to dinner the first night, we noticed the hotel's Seminyak Kitchen restaurant was having a local-seafood night. We were sold.

There were local delicacies like fish cooked in banana leaves and grilled prawns, along with Western favorites like fish and chips. And the dessert station was epic.

At about $25 a head including my 20% discount, it ended up being quite a good value. The service was also incredible at the restaurant. Our server remembered the name of every person at our table and was extremely personable. When we asked about one dish they'd run out of, the staff quickly cooked up a personal plate and delivered it to the table. This wasn't something we asked for, it was just done, which was amazing.

Breakfast, which was included for both Gold and Platinum guests, was served in the same restaurant.

The spread was impressive, with everything from a fresh juice bar and stations for noodle soups, waffles and ice cream. With this breakfast, you could easily skip lunch. The staff was just as friendly as at dinner, and always quickly offered to take coffee and tea orders. They greeted every guest as they walked past with a cheerful hello, and even when the table next to us was uncomfortably rude to the waitstaff, the smiles never wavered. If something a guest wanted wasn't available, you could request to have it at the buffet the next day.

The general manager came over to speak with us about the depressing result of the match (it turned out he was a Liverpool fan too) and took a seat to chat with us about our plans for the day. This was definitely a key part of this hotel's service, a personal touch that was a far cry from the sometimes robotic responses you get from a chain hotel.

At the entrance of the hotel was a small taco truck that had takeaway drinks. I thought it was a fun touch that added flavor to the hotel.

I couldn't believe that this hotel was a Courtyard. Forget the dingy motels of your childhood holidays — the Courtyard Seminyak is a tropical dream. Yes, it's a resort and, yes, it's very family-focused. But I was impressed by the modern facilities and design aesthetic, the impeccable service and the delicious food. The price and location are also great if you want to be in the buzz of Seminyak. The team was so welcoming and the prices of the food and drinks were so reasonable that I couldn't think of a good reason to leave. Next time I need to be in Seminyak, I know where I'll be staying!

Featured image by RAVI GHELANI/THE POINTS GUY
Editorial disclaimer: Opinions expressed here are the author’s alone, not those of any bank, credit card issuer, airline or hotel chain, and have not been reviewed, approved or otherwise endorsed by any of these entities.