Flight review: What it’s like flying with Contour Airlines

Articles
Zach Griff is a senior reporter at TPG. He writes travel and product reviews, deep dives into loyalty programs, news about the airline industry and more.
Follow
May 06, 2020
•
8 min read 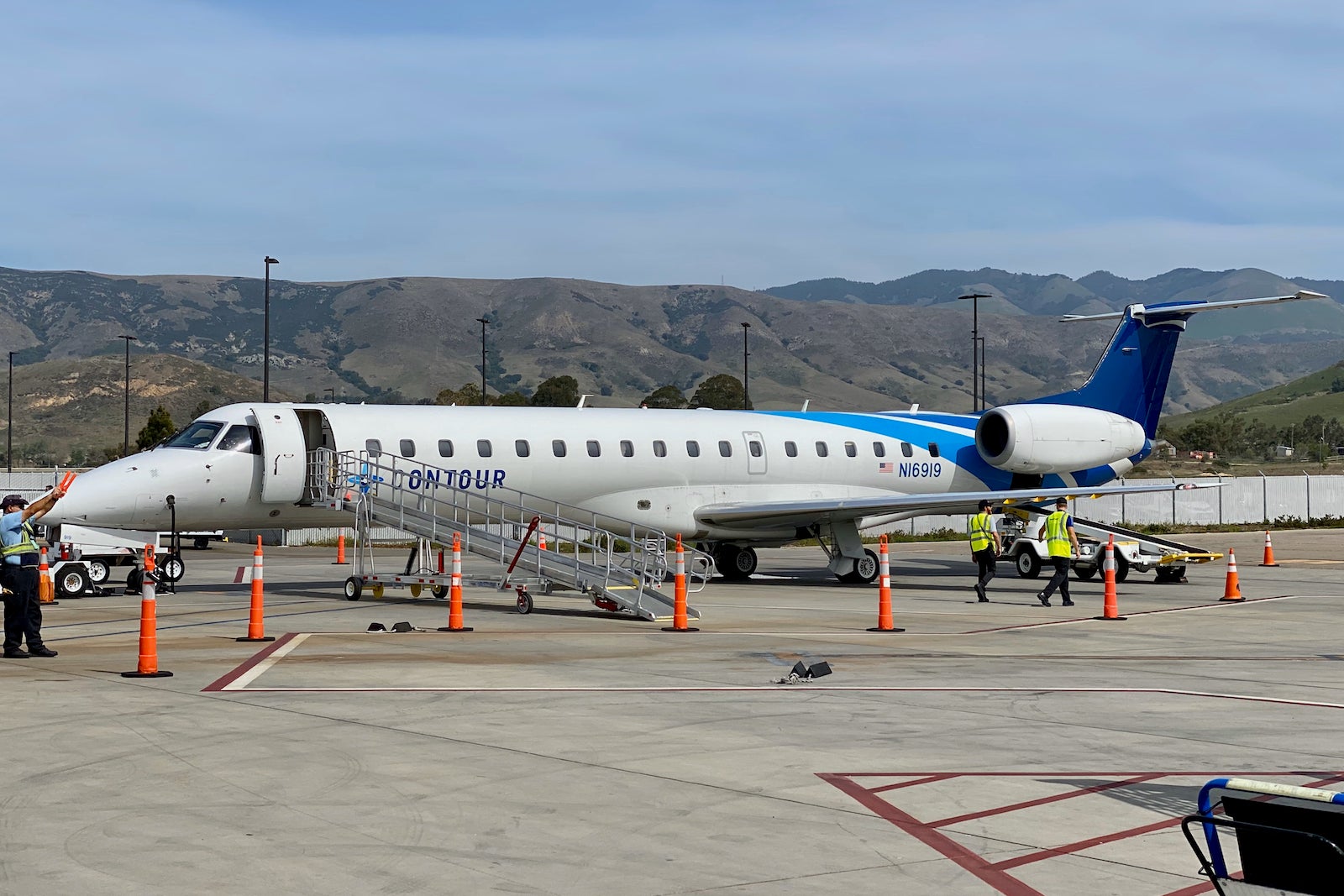 During the COVID-19 crisis, our team has temporarily ceased taking review trips. Instead, we have been publishing a selection of our most popular reviews from the past year. We have also resumed the publication of new, previously unpublished flight, hotel and lounge reviews, from trips taken before the lockdown. This flight was taken just before air travel largely shut down.

We hope this will help you choose once we’re all ready to start booking trips again.

Every so often I stumble upon an airline I've never heard of before. That's exactly what happened when I was looking for an unusual way to go from Las Vegas to Los Angeles to check out the newly opened Centurion Lounge at LAX.

When browsing the Las Vegas Airport Wikipedia page, I noticed that Contour Airlines flies from there to a few destinations in Arizona and California. Turns out they're actually a pretty sizeable regional airline based in Smyrna, Tennessee, with routes to an assortment of large and small airports around the country.

Interestingly, they're also the only commercial airline offering service to Page, Arizona. As the flight attendant explained, Page is the closest city to Amangiri, one of America's most exclusive hotels. She said she often sees celebrities and other notable figures on flights from Las Vegas to Page.

I flew with Contour from Las Vegas to San Luis Obispo in Southern California, so read on for what it's like flying with them.

Booking a ticket with Contour isn’t much different from any of the major airlines. I had no trouble finding my desired itinerary on Google Flights, and the airline’s website was easy to navigate when it came time to book, for $229.

Thanks to a recent partnership with American Airlines, you can now book Contour tickets on the same itinerary as some AA-operated flights. Unfortunately, you won’t be able to earn or redeem AAdvantage miles for your Contour flights.

Each passenger is allowed one checked bag free of charge, as well as a carry-on and a personal item.

My time with Contour Airlines began on a sunny morning in Las Vegas. My Lyft driver didn’t know which terminal the airline used, but a quick Google search confirmed that they operate from Terminal 1 in the D Concourse.

At the airport, there were plenty of signs pointing to the Contour check-in counter.

You could bypass this step by printing your boarding pass online, but I wanted to have the full Contour experience, so I waited until arriving at the airport to complete check-in.

There were two check-in desks. The agents at each desk were both quite cheery that morning. Check-in was completed within minutes, and I was on my way to the D Gates shortly thereafter.

Though Contour is certainly one of the smaller airlines in America, they participate in TSA PreCheck. McCarran International Airport (LAS) also has Clear security lines, so I was airside quickly.

After a short tram ride to the D Gates, I made my way to the American Express Centurion Lounge for some food before my flight.

Before long, it was time to head over to the gate for boarding. Contour uses Gate D59 for all flights because it has a built-in stairwell that takes you down to the tarmac to board the plane.

Boarding was slightly delayed. Even though I only got on the plane 10 minutes before scheduled departure time, we had no problem filling the plane in time for pushback right on schedule.

While boarding, those with rollaboards left them by the gangway for storage in the cargo hold.

I was first aboard, and couldn’t wait to check out the cabin of this 19-year-old Embraer 145.

Though the ground experience was seamless, I'd note that Contour's chief West Coast competitor, JSX, has them beat. JSX operates from facilities known as FBOs (fixed-base operators) rather than airport terminals, so you can arrive at the airport just 20 minutes before your flight and enjoy a seamless boarding experience without the hassle of navigating a large airport or TSA security.

Related: What it’s like to fly with private-jet operator JSX

The first thing I noticed when I stepped inside was the spacious cabin.

There are just 30 seats, with a bunch of extra space before Row 1 and behind Row 10.

I asked the flight attendant why Contour didn’t put more seats in these E145s, which are designed for up to 50. She explained that because of the weight and balance considerations and to keep capacity the same as the airline’s E135s, the airline decided to keep 30 seats across its entire fleet. (JSX does the same.)

This adds a more luxurious feel to the cabin, which felt incredibly spacious.

Seats themselves are arranged in a 1-2 configuration, spread across 10 rows.

I liked the tan leather seats, and found them very comfortable for the 57-minute hop to San Luis Obispo.

The seats measure 18 inches wide and offer 36 inches of pitch.

Row 8 is the exit row, with five additional inches of pitch -- key for taller passengers.

But if you’re Brian Kelly-sized, you’ll definitely want to select Row 1, which has infinite legroom.

The small overhead bins above the coupled seats will hold a backpack.

There’s plenty of under-seat storage, especially in the coupled seats because there isn’t a metal support bar between seats.

The passenger-service unit above the seat has a light, a flight attendant call button and a personal air nozzle.

Above the seatback pocket is the tray table, which is 16 inches wide and 11 inches long. I had no trouble fitting my 13-inch MacBook Pro on this table.

There’s one lavatory at the back of the plane that isn't as small as I would’ve expected.

All in all, Contour offers a well above-average economy experience, especially for what’s essentially a small regional jet.

When I fly new airlines, I’m always curious to see their food and beverage offerings. For instance, I was so impressed with the Denver Air Connection snack basket that I wrote a whole separate post about it.

Though Contour didn’t beat Denver Air Connection, it still earned a passing mark from me.

Once airborne, the incredibly friendly flight attendant, Zoe, came through the cabin with a snack tray consisting of Nutri-Grain bars and belVita Breakfast Biscuits.

She returned a few minutes later to collect drink orders. She didn’t write anything down; she remembered everyone’s choice and brought it out with a smile.

There was no printed menu. Instead, Zoe told me my choices — Coke soft drinks and an assortment of juices. She also explained that they are working on adding alcohol service, but hadn’t yet received the required permits.

I don’t usually expect much when it comes to regional jet flying. Sometimes you’re lucky even to get a cup of water.

As expected, there wasn’t much in the way of amenities for this 314-mile flight. There was no power outlet, Wi-Fi, or inflight entertainment or magazine in the seatback pocket.

Fortunately, the windows are large. At nearly 13 inches wide and 14 inches long, I kept my eyes focused outside for the duration of the flight.

Contour offers an above-average regional flying experience. With just 30 seats in a cabin that could fit many more, I was impressed with the amount of personal space dedicated to each passenger. Furthermore, the seats were comfortable and the windows large enough to capture some great shots.

The friendly flight attendant provided a full service, including full-size drinks and a selection of tasty snacks.

So, if Contour flies where you’re going, I wouldn’t hesitate to book a ticket with them.