California dreamin': A review of American Airlines business class on the A321T from Los Angeles to New York

Articles
Samantha Rosen was one of the first 20 employees at TPG. She started as the site's first full-time social media editor and also served as its lifestyle editor.
Follow
Dec. 27, 2019
•
14 min read 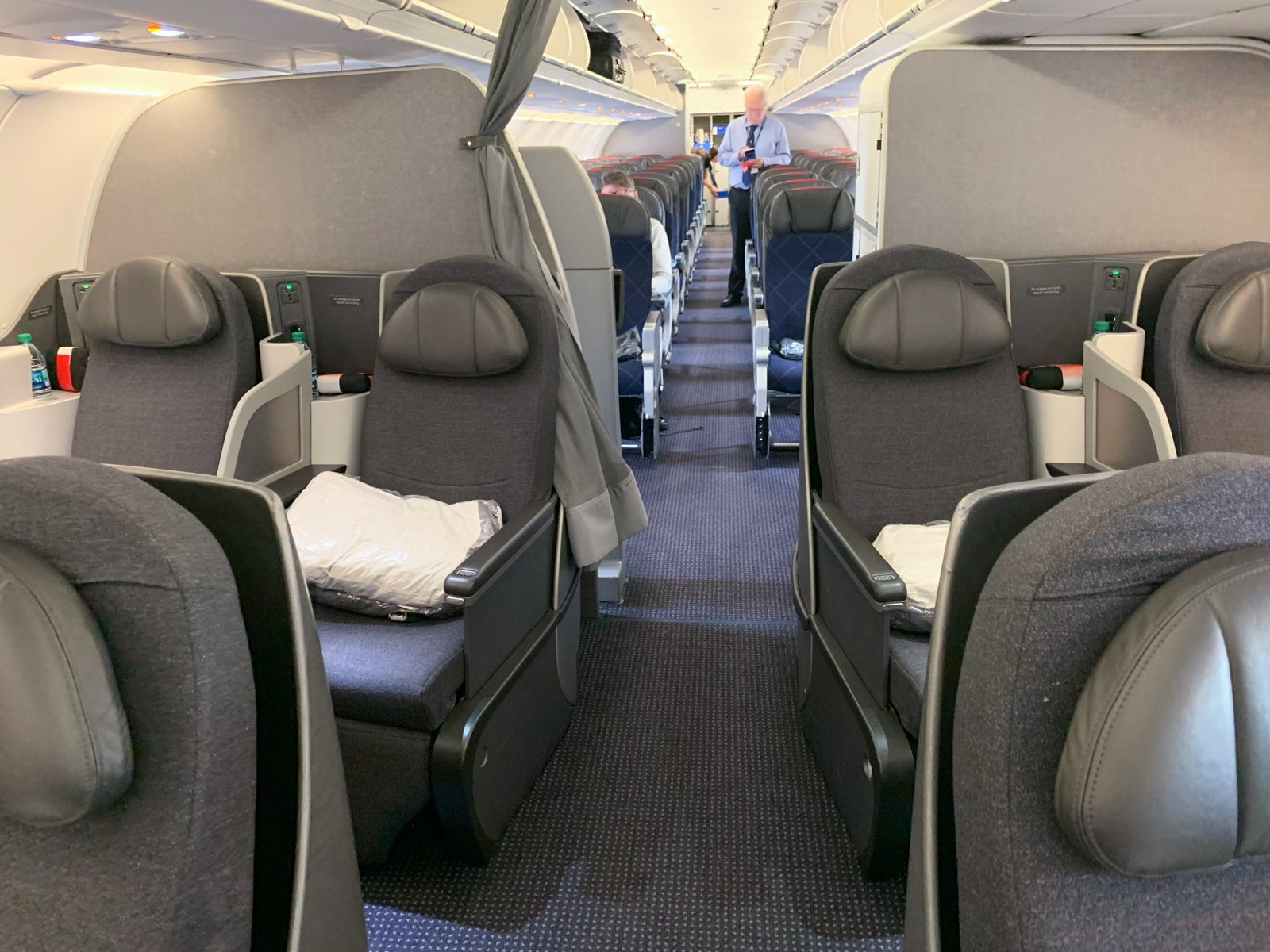 California dreamin': A review of American Airlines business class on the A321T from Los Angeles to New York
This post contains references to products from one or more of our advertisers. We may receive compensation when you click on links to those products. Terms apply to the offers listed on this page. For an explanation of our Advertising Policy, visit this page.

Considering the fact that the cross-country route between New York-JFK to Los Angeles (LAX) is one of the busiest domestic routes not only in the country, but the entire world, it's no surprise that airlines have really been stepping it up in recent years. With so many options to choose from -- American Airlines, Delta, JetBlue and United all offer dedicated premium products for those traveling up front -- it can be challenging to narrow it down ... especially if you're traveling in business class.

I set off on a 24-hour journey to L.A. to find out how American Airlines stacks up to the competition.

You know it's going to be an interesting day at the office when the team responsible for booking staff travel asks if you have plans for the upcoming weekend. The next thing I knew, I had plans -- I'd be going to L.A. on the weekend for a quick 24-hour trip, with the purpose of reviewing both this flight and the economy product on the same aircraft.

TPG's travel analyst Zach Griff poked around ExpertFlyer and found upgrade award availability on the return flight from LAX to JFK. So, we purchased a round-trip economy ticket for $640 with The Platinum Card® from American Express for a round-trip economy flight and applied a Business Extra upgrade for the way home.

That Business Extra upgrade was key, as one-way business-class fares on this route typically range from about $600 to $1,400. If you're looking to redeem your AAdvantage miles for a flight like this, you can expect to pay anywhere from 22,000 all the way up to 96,000 miles for a one-way ticket, depending on when you're traveling.

The American Airlines experience started off as great as the pesto rigatoni I had at Jon & Vinny's during my 24-hour visit to the City of AngelsFriday night (OK, maybe not that good), but it wasn't all good news.

Of course, as soon as I arrived at the airport and cleared security, I headed straight for AA's Flagship Lounge, which I could access thanks to my business-class ticket.

American has really done a great job with these lounges, and I found the food selection as well as the space itself to be well above average for a U.S. carrier.

The space itself was bright (and spotless), with massive windows that overlooked the gate area. I'm no AvGeek, but I know that the views from this lounge would really impress a lot of you.

The seating options were plentiful, and I loved the full bar, particularly the self-serve wine station. This really is a great spot to kill time before a flight, and got things started off on the right foot.

However, as it was getting near the time for me to head to my gate, I glanced at the departures board and noticed mine had been delayed 40 minutes.

And then another 20 minutes.

And then another 30 minutes.

So, my 3 p.m. departure turned into a 4:30 p.m. departure. It was far from the worst thing in the world, and I wasn't even that frustrated with the delay itself, but what I found annoying was the lack of communication from the airline. AA's app doesn't support push notifications, nor did I receive any text or email updates. For me, it wasn't the biggest deal, but it's definitely something you should consider if you fly back and forth frequently between the two cities. Especially in the winter.

American's A321T (the "T" stands for "transcontinental") is unique. The aircraft was designed specifically for the premium East-West Coast flights, and it has a true international-style first-class cabin with lie-flat seats arranged in a 1-1 configuration.

Business class isn't too shabby, though. It features the Collins Aerospace Diamond seat that's found on many airlines around the world. For an international business-class flight, this product wouldn't blow me away, but it was more than fine for the transcontinental jaunt.

It's a 2-2 configuration, which means you'll either have to climb over your neighbor or get climbed over by your neighbor, depending on which seat you have. There are 20 seats in the business-class cabin, in addition to 10 in first class and 72 in the main cabin.

My seat was comfortable, although it wasn't the most private. There was a small divider between seats, though, so I didn't see my neighbor when fully reclined.

If you've read any of my reviews before, you'll know I always have a lot of stuff — yes, even for a 24-hour ordeal. There was plenty of room for my large bag at the footwell.

On the flip side, though, it was no dice for a small storage compartment next to my seat.

The seat fully reclined into a lie-flat bed. There wasn't a mattress pad, but American's signature Casper-branded comforter and pillow were waiting for me as soon as I boarded.

Due to the 2-2 configuration, passengers ended up sharing the armrest with a neighbor. (Naturally, my side was filled with a healthy pour of white wine.)

Once I was settled into my little bed in the sky, I made myself comfortable and started perusing the in-flight entertainment system.

There was a solid selection of movies, totaling a little less than 200. I opted for "Booksmart," since I wanted to see what all the hullabaloo was about.

The monitor itself was a good size, and the picture was sharp. It was a touchscreen, but I found the remote easier to use.

I wrote about American's collaboration with trendy retailer APL for their latest amenity kits before, and it appeared they were doing a special one with Stand Up to Cancer this time around.

Inside, there was an eye mask, tissues, toothbrush, toothpaste, earplugs, Zenology lip palm and body balm. They also had a coupon for 20% off your first purchase at either Zenology or APL's website.

They're clearly high-quality headphones and worked really well, although they were a little bulky and the cord plugged into the outlet all the way at the end of the seat. Flight attendants collected them about a half hour before boarding.

I found a USB outlet and socket for headphones at the end of the seat, right by the divider.

No matter which cabin you were sitting in, you could stream Apple Music for free. I found the Wi-Fi to be excellent, so if having Wi-Fi access is important to you when picking a flight, American Airlines is worth a look.

Shortly after takeoff, flight attendants began the meal service. I, for one, was really looking forward to my burrata and eggplant appetizer.

It did not disappoint, although I can't say the same for the little side salad.

I had preselected my entrée, the salmon with rice, peas, carrots and herb butter.

Still feeling the Cape Town spirit after my incredible trip to South Africa a few weeks prior, I ordered the chenin blanc/Chardonnay blend to go along with my meal.

I'm usually picky about salmon and was hesitant to try it, but I also didn't want short ribs drenched in beer sauce (I mean, really, why is that necessary?) but did want something more substantial than sweet potatoes or a grain bowl, so it was pretty much process of elimination.

The salmon was actually decent and filling. Wish list for 2020: having the ability to customize meals and substitute or swap items on planes. Please, airlines, make it happen. I beg of you.

Dessert was one of American's classic ice cream sundaes. I only had a bite, but it was delicious.

A little while after dinner, flight attendants came around with more snacks, as well as their signature chocolate chip cookies, which I declined.

Overall, the food was good, but definitely on the decadent side. I appreciate there being options like sweet potatoes and grain bowls, for the entree, but more balance overall would be greatly appreciated.

The service, much like my meal, was good but nothing particularly memorable. The flight attendants were helpful and nice but certainly didn't give you that warm and fuzzy feeling. At one point, I accidentally pressed the call button, and one of them was at my seat only 10 seconds later. Just my two cents: Service is the low-hanging fruit that American — and let's be real, most airlines — can improve fairly easily to make them stand apart. A smile really and feigned interest go a long way.

American offers a really solid experience for cross-country business-class flights. The seat was comfortable, there was a large selection of movies and TV shows, and there was more than enough food to keep you (very) full. And, the Flagship Lounge was definitely not a bad place to spend a couple of hours.

As far as downsides? The app needs major updates (read: push notifications). There's also room for improvement with the food options -- hopefully AA will continue to work to balance out the ice cream sundaes and chocolate chip cookies with some healthier snacks. I was flying back from L.A., after all.

Featured image by Photo by Samantha Rosen/The Points Guy
Editorial disclaimer: Opinions expressed here are the author’s alone, not those of any bank, credit card issuer, airline or hotel chain, and have not been reviewed, approved or otherwise endorsed by any of these entities.