Articles
Katherine Fan is a former senior travel features reporter at The Points Guy who covered everything from personal finance to travel and aviation.
June 08, 2020
•
10 min read 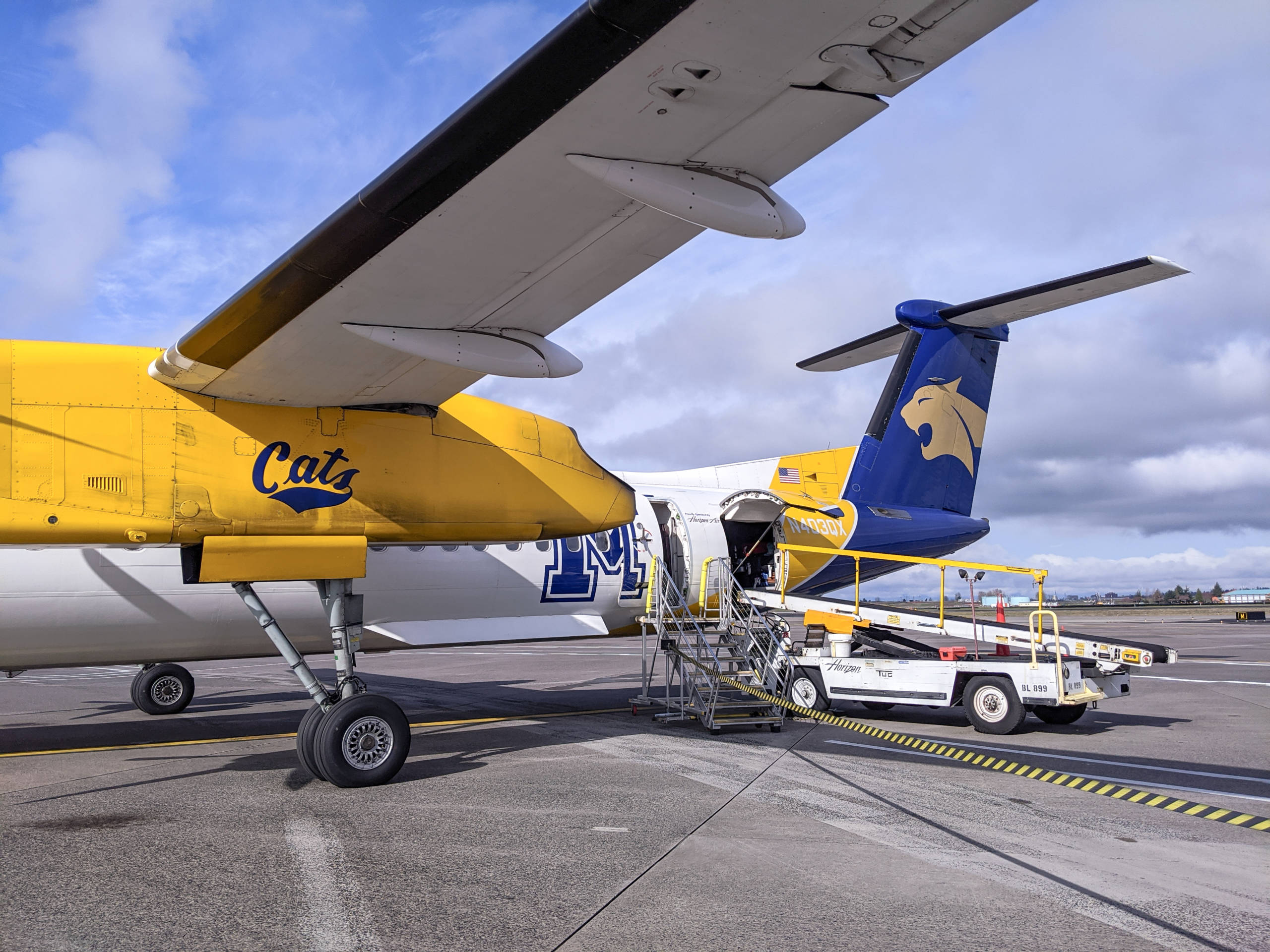 During the COVID-19 crisis, our team has temporarily ceased taking review trips. However, we are publishing new flight, hotel and lounge reviews, from trips taken before the lockdown, like this one, which happened on March 8.

Bear in mind that for the foreseeable future the onboard and ground experiences — with lounges closed or without food and amenities — will be very different from what was available before the pandemic.

Only one airline among the U.S. majors operates turboprop planes: Alaska Airlines, whose regional affiliate Horizon Air flies the twin-engined Bombardier Q400 on many short hops in the Pacific Northwest. That was the plane I boarded in early March on one of my last trips before the U.S. shut down to contain the spread of COVID-19.

Alaska Air Flight 2941 from Portland to Seattle was scheduled at 61 minutes from gate to gate, with just over half an hour spent off the ground. The 76-seater plane — that's relatively big for a passenger turboprop — and the airline did their job well, but I recall this flight mostly for the surreal feeling I get thinking about it. Like my last flight before lockdown, in United basic economy from Denver to Austin, this one happened not long ago but feels like a bygone era. Indeed, experts foresee many ways that various forms of travel, from flights and cruises to hotels and theme parks, will never be the same following the novel coronavirus pandemic of 2020.

Yet on Sunday morning, March 8, I had no idea what was ahead in the months to come. The World Health Organization would declare COVID-19 a pandemic three days later. But that morning, I was focused more on getting to the Capers Cafe in the Portland International Airport as quickly as possible to score free breakfast, courtesy of my Priority Pass membership.

Here's what it was like to fly on the Q400. (This Canadian-made turboprop plane is sometimes referred to as the Dash 8-400, too.)

I stayed at the Sheraton Portland Airport Hotel the night before my flight, so getting to the airport was very easy. (On a side note, the Sheraton Portland was one of the friendliest domestic airport hotels I've ever visited, even during the uneasy times of early March. I would absolutely recommend it.) The hotel offers an airport shuttle, and the driver got me from door to door within seven minutes.

The Portland airport felt open, airy and easy to navigate as always, and I quickly breezed through check-in and security. There were no other guests in line at the counter, and I was able to grab a boarding pass from the agent without touching a single potentially germy surface. The security checkpoint was equally empty, and I found myself in the center of the concourse in no time.

The Portland airport had hand sanitizer dispensers set up everywhere, but half of them were empty and hadn't been refilled.

Related: Skip the lounge and get free food at these airport restaurants with Priority Pass

At the Capers Cafe, I got a delightful — and filling — scramble with bell peppers, egg and potato in a takeout box.

When I reached my gate, I noticed that the flight had a waitlist of 13 standby travelers. But over the next 30 minutes before boarding time, the list quickly dwindled until every single waitlisted passenger had a boarding pass with seat number in hand. The gate agent told me that the number of travelers had gone way down since the beginning of the coronavirus pandemic, a fact corroborated a few weeks later by official TSA reports.

When it came time to board, I got excited because we were going to walk onto the plane the old-fashioned way: Out a secure door onto the tarmac, then up a set of rolling stairs into the small aircraft. Whenever this happens, I always hang back a little bit to snap photos, and only rarely do I get reprimanded or told to put my camera away.

I even snuck a photo of the half-full luggage hold while waiting for the passenger in front of me to step inside the plane. The small luggage hold on the Dash 8 really drives home the importance of packing lightly on small planes.

On board, all 76 seats are in a single class in a 2-2 layout. There is no first class, only four seats with extra legroom at the front of the plane. Legroom at most seats is 31 inches, with 17-inch width, within the coach-class average. In this regard there is no difference between a turboprop and the average jet, but note the lack of window shades.

I had chosen a window seat for myself, and got lucky with an empty aisle seat next to me as well; the flight was almost full. We were in the air on time.

The seats have thin backs and padding, but what you lose in that department you gain with legroom that feels larger than the nominal 31 inches.

I don't often get to fly on prop planes, so it's always a fun treat. Turboprops like the Dash 8 — which have jet engines driving propellers — are a relatively rare sight in the U.S. Despite the "prop" name, they behave much like jets, and can cruise at 25,000 ft and more than 400 mph.

This lovely little bird also sported a special, colorful livery as part of Alaska Airlines' West Coast university series. My Dash 8 wore cheerful yellow and navy colors, as well as the logo and mascot of the Montana State University Bobcats.

The interior of the plane featured burgundy leather seats with greige accents. The seating felt small but surprisingly comfortable regardless. The short flight meant that service was limited to a quick drink; I don't remember if I was offered a snack, but I had my Capers Cafe scramble to munch on, so I didn't need anything by way of sustenance for our brief time in the air. On a flight from Portland to Seattle, a seat on the right side often results in great view of the Cascade volcanoes, like 11,249-ft Mount Hood.

About halfway through the flight, our captain jovially came on the intercom to reassure us that "if we had heard anything on the news lately and had any concerns about a certain bug," the air circulating through our cabin had passed through a continually circulating ventilation system that heated up recycled air to approximately 580 degrees Celsius before cooling it and passing it back through the cabin. "So don't worry about your health," he said, "and we'll be on the ground soon."

It was thoughtful of him to offer up this information unprompted, and my fellow passengers seemed to relax slightly after his announcement.

Within minutes of his announcement, we had arrived in Seattle. Once again, we disembarked on the tarmac outside of our gate, took a deep breath, and walked into the terminal of what was at the time one of the major hotspots of the coronavirus outbreak.

I was surprised and a little unsettled by the number of travelers despite the risk of coronavirus transmission.

We touched down in Seattle just before noon, and I clambered out to stretch my legs and grab some lunch before boarding my next flight. Seattle was the most unsettling location I visited on my whirlwind coronavirus reporting tour: Despite making headlines as one of the regions infected earliest in the United States, travelers were everywhere, without any face masks in sight, touching and handling everything. I'm not much of a germophobe, but I scrubbed my hands carefully and spent the rest of my layover hiding in a quiet corner in the Club Lounge at Seattle, once again courtesy of Priority Pass.

I miss flying, but it will be a little while longer before I board a plane for leisure travel. But when the time comes, I'd happily hop back on board the Dash 8 if it's traveling my way.