Service With a Smile: Alaska Airlines Economy (737) From Newark to San Diego 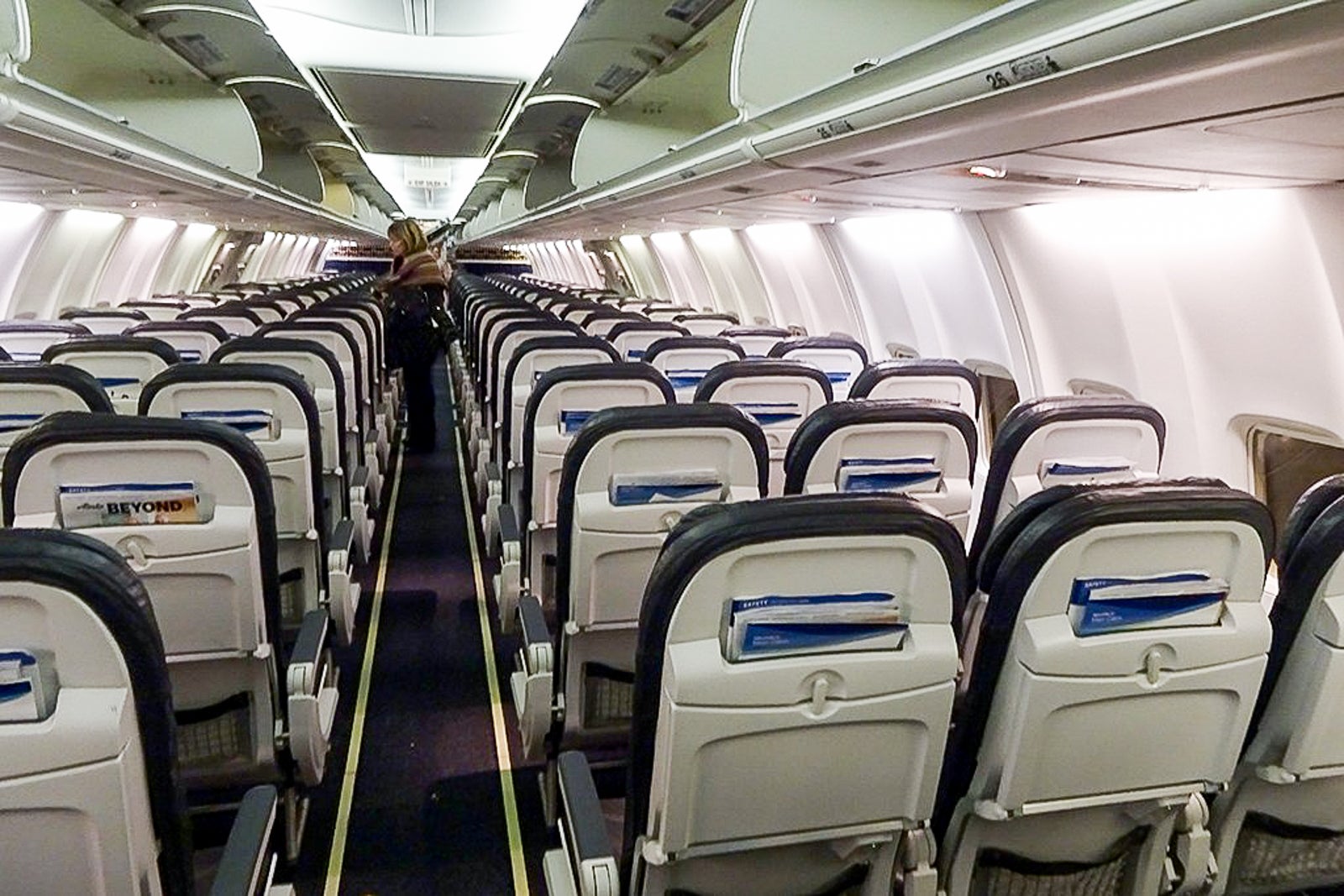 Service With a Smile: Alaska Airlines Economy (737) From Newark to San Diego
This post contains references to products from one or more of our advertisers. We may receive compensation when you click on links to those products. Terms apply to the offers listed on this page. For an explanation of our Advertising Policy, visit this page.

I've flown Alaska Airlines up and down the West Coast and to Hawaii, but the carrier, in part thanks to its takeover of the now-extinct Virgin America, has been expanding eastward. In the New York area, it offers flights from both Kennedy Airport (JFK) and Newark (EWR) to the West Coast. It launched nonstop flights from Newark to San Diego and Portland, Oregon, in late 2016, and I finally got around to flying Alaska to my hometown airport of San Diego this November.

I'm usually pretty loyal to JetBlue, which flies nonstop from New York-JFK to San Diego (SAN) and affords me sweet perks as a Mosaic elite, but I've always had a positive experience flying Alaska, so I was curious to see how that carried over to a transcon flight.

I paid $218.20 for this one-way flight, booking with the Platinum Card® from American Express to earn 5x points. That worked out to 1,091 Amex Membership Rewards points, worth about $22 based on TPG's valuations. I credited this flight to Alaska and earned 2,425 redeemable miles for the trip — 100% of the distance flown with no bonus miles, since this flight was booked in a discounted economy-fare class (K).

This same flight would have set me back 12,500 Alaska miles. Alaska Airlines' Mileage Plan program has amazing sweet spots in its award chart, like Cathay Pacific first class from the US to Asia for 70,000 miles one-way, so we valued Alaska miles higher than all other airline currencies, at 1.8 cents apiece. Doing the math, 12,500 miles were worth $225, slightly more than the out-of-pocket cost of my flight, so while it was a close call, paying rather than redeeming for this itinerary was the better option from a miles-conservation perspective. I had about 70,000 miles banked with Alaska, and I would much rather have used those for a premium-cabin redemption to Asia than a flight to the West Coast or even Hawaii, especially as Alaska currently doesn't have any lie-flat seats in its premium cabins.

Alaska miles can be incredibly valuable, but there aren't many avenues for earning them. Your main options are flying paid Alaska Airlines itineraries (naturally), transferring Marriott points over, using the Alaska Airlines shopping portal and opening the Alaska Airlines Visa Signature credit card. The card's currently offering a sign-up bonus of 30,000 miles when you spend $1,000 in the first 90 days from account opening, and you also get a companion fare for just the taxes and fees (in subsequent years of card membership it's available for $99 plus taxes and fees) for buy one, get one free travel for a friend or family member.

My flight from Newark was scheduled to depart at 6:50pm on a Friday, but as I checked the flight status throughout the day, I saw that it was delayed an hour. I still headed to the airport anticipating an on-time departure, since things can always change and you should never assume that a delayed flight won't leave earlier than anticipated.

I made the costly (both in time and money) mistake of taking an Uber from my home in Brooklyn to Newark — I usually fly out of JFK, so I forgot what a hellscape Holland Tunnel traffic could be on a Friday evening, even before adding in the factor of heavy rain. I got to Newark at about 6pm, which would have been cutting it too close for comfort if the flight left on time, considering I was checking a bag. "Luckily," though, the flight was still delayed, and there was no line at the Alaska check-in counter and only a three-minute wait at Terminal A security.

The reason for our delay was a delayed inbound aircraft, and we didn't end up boarding our 737 until 7:43pm. The boarding area was kind of a zoo, with very few open seats and not much space. I posted up near the tarmac-side window, where things were a little less crazy.

Once we finally did board, it all went pretty smoothly, but our delay ended up being much longer than anticipated. A crew member came over the intercom system to explain that a light in the plane wasn't working and that they were waiting on a mechanic to come and fix it. It wasn't clear what exactly the problem was, but it seemingly turned to be nothing more than an overhead light over a seat that went out — when a mechanic came on board over an hour later to fix it, my seatmates (I was in the window seat, so I couldn't see) said he just screwed a lightbulb in.

It was definitely an annoying delay, but the flight attendants did their best to keep everyone happy. They came around with water, and once again a bit later with packets of crackers. This stood in stark contrast to previous delays I've experienced, such as a two-hour wait on United from San Francisco to Newark some years back, where FAs avoided eye contact and responded to any requests for water reluctantly.

The FAs were friendly and apologetic, even in the face of a few notably cranky passengers. What do you think, guys, that it's the flight crew's idea to keep us waiting for an hour and a half?

We finally took off at 9:26pm, about two and a half hours after our original departure time.

I quickly noticed that this 737-900 looked pretty aged and not exactly tidy.

There were crumbs on some of the seats — probably because of the incoming aircraft's delayed arrival and a necessarily rushed job by the cleanup crew.

The seats themselves weren't overly narrow, and the legroom situation was decent (I'm 5 feet, 7 inches, for reference).

Still, the angle of the seats seemed to hurt my back more than I'm used to on economy flights.

The seatbacks were stocked with all the usual materials: aircraft and safety info, an onboard menu and the inflight magazine.

My seat was 27A, and the nearest lavatory was the one at the back of the plane. I checked it out during boarding and later during the flight, and it was pretty clean both times.

But like every other aspect of this aircraft, it just felt kind of old and in need of a refresh.

Overall, I wasn't impressed with the cleanliness or general upkeep of the cabin, and the plane felt older than 10 years (its actual age).

There was no seatback entertainment on this flight, which I expected but still found annoying, given that I'm used to JetBlue's ahead-of-the-game IFE. The airline offered tablets for purchase on most flights longer than three and a half hours, but I never saw flight attendants come around with these on our flight. I didn't bring a tablet, so my only entertainment option was streaming through Alaska Beyond Entertainment, accessible via the Gogo Entertainment app.

Free movies included "Ready Player One," "The Greatest Showman" and a few of the "Lord of the Rings" installments, and TV shows included "Cheers," "House Hunters" and "Riverdale." I wasn't enticed by anything and caught up on work instead.

Alaska's inflight Wi-Fi was also courtesy of Gogo, and it was usable but not great — think good enough for loading and responding to emails but not uploading and downloading files. As a T-Mobile customer, I got a free hour of internet, and Alaska offered free inflight texting.

There were power ports with USB and universal AC on the seatbacks, at least, which I needed after furious texting and Spotify listening to get through the delay.

Typically, there would have been no complimentary meal service in economy, but the flight attendants were kind enough to offer all passengers food and drinks for free to make up for the delay.

I had a vodka soda (usually $7.50), and was given two miniatures of Tito's vodka. I wasn't mad about that.

I also had the fruit-and-cheese platter (usually $8.50). I was planning to save my appetite for Mexican food upon arrival in San Diego, but with the delay, I was too hungry to hold off.

The delay put everyone in a bad mood, but I have to hand it to our flight crew for maintaining friendly and cheery dispositions even in the face of cranky passengers, and the complimentary food and drinks did help ease the pain of the significant delay.

The hard product here wasn't great — the plane was old; the seats weren't very comfortable even by economy standards; and there was no inflight entertainment. I don't think I'll ever pick Alaska Airlines for future travel from NYC to the West Coast. There are just too many better options, chiefly JetBlue with its nonstop JFK-SAN service and superior seats and amenities. But I do have to hand it to the flight crew for making the best of a far-from-ideal situation. I've never encountered a mean flight attendant on Alaska, and I appreciate that.