Eying French Polynesia? This cruise line will double its number of available cabins

Articles
Ashley Kosciolek has spent more than a decade writing about travel, with particular emphasis on cruises. Her favorite cities include London; Amsterdam; Krakow, Poland; Phnom Penh, Cambodia; Dawson City, Yukon; and anywhere known for outstanding pizza and theater. You can follow her daily exploits, both at sea and on land, on Instagram or Twitter @slyjabroni.
Follow
Oct. 27, 2022
•
7 min read 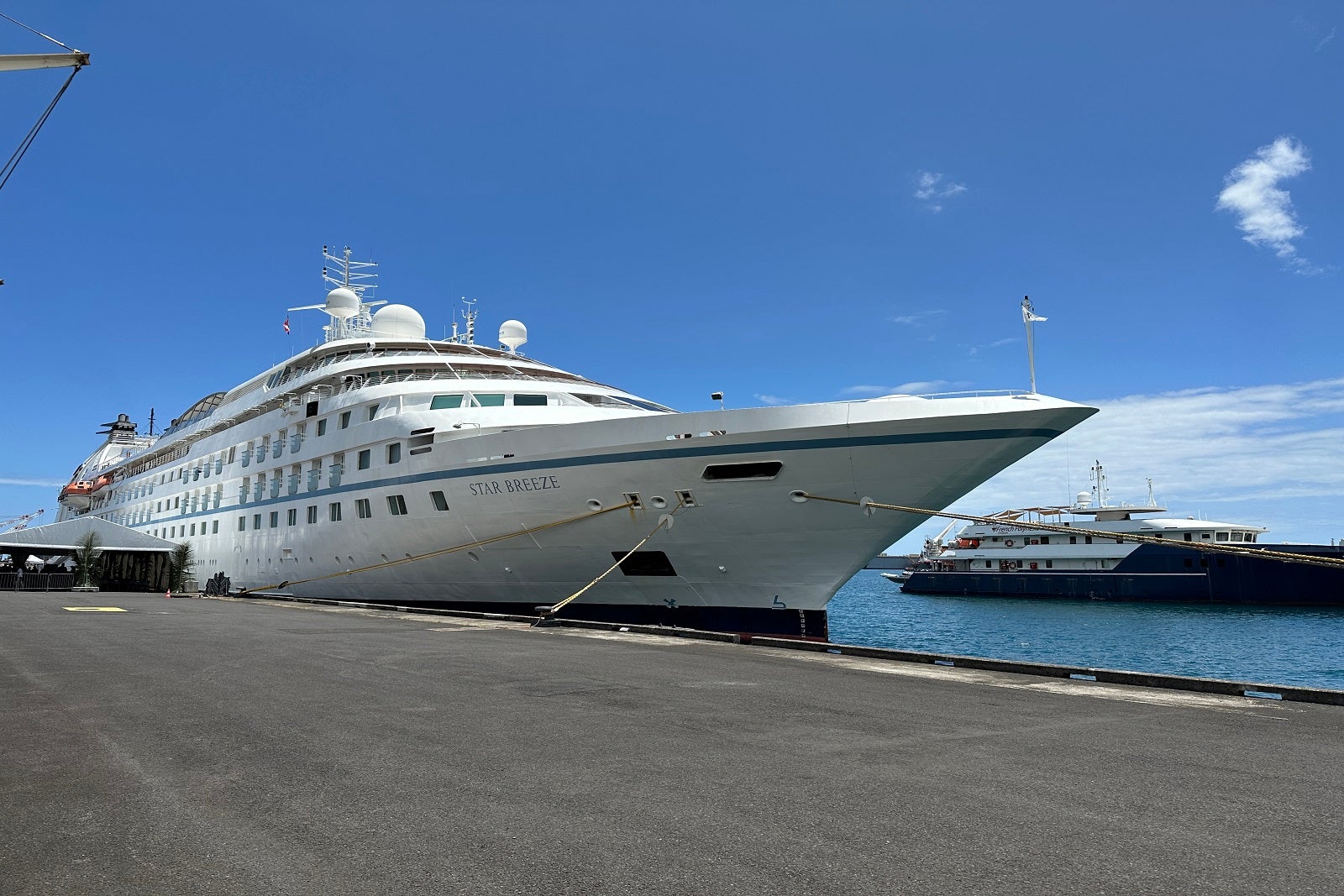 TPG's Ashley Kosciolek was hosted by Windstar Cruises for a French Polynesia sailing on Star Breeze. The opinions expressed below are entirely hers and weren't subject to review by the line.

Visits to French Polynesia have always been niche — aspirations for travelers looking for an idyllic beach getaway or honeymooners who want to kick off their marriages on the right foot. But demand has grown so much recently that one cruise line has added a ship that will double its capacity in the region.

As one of many signs that the destination is flourishing, small-ship specialist Windstar Cruises will station its newly refurbished Star Breeze in French Polynesia full-time, beginning in February 2024. The ship was stretched in 2020, during the pandemic shutdown; that expansion added 50 cabins and increased the vessel's capacity from 212 to 312 passengers.

Star Breeze paid a visit to the region on Oct. 9 with a sailing around the French Polynesian islands of Tahiti, Bora Bora, Moorea, Raiatea and Taha'a, marking the 35th anniversary of Windstar's commitment there.

When it makes its transition, the ship will replace Wind Spirit, one of the line's masted sailing ships, in offering year-round voyages to the French Polynesian islands. Wind Spirit has a capacity of 148 passengers; its replacement by Star Breeze will effectively increase the number of passengers Windstar can bring to the region by more than 100%.

"For us, [expanding capacity] made sense because we are year-round in French Polynesia already," said Christopher Prelog, Windstar Cruises' president, in an interview with The Points Guy. "With the airlift increases we're seeing ... there's just an increased interest in French Polynesia. This is our home turf. This is the perfect place to grow. This is a great destination for us to develop a larger footprint."

Although the French Polynesian government welcomes growth, that doesn't mean cruising will expand in a way that will create overtourism in the region. In fact, some islands in the area are limiting ship sizes, and although there are some dock improvements planned in the ports that currently have docks, there are no plans to build new ones to accommodate larger vessels. Instead, ships anchor and tender passengers ashore in most ports.

"Tourism is our first industry," said French Polynesia President Edouard Fritch during an interview onboard Star Breeze, noting that, in 2019, French Polynesia saw about 260,000 visitors who stayed at least one night — a number similar to the destination's population of 281,000. "I'm saying 'first industry' because almost half of all working people in this country work for that industry. Tourism represents around 10% or 11% of our [gross domestic product]."

"Our strategy is one tourist per capita," Fritch said. "We don't want to be a destination like Hawaii or Fiji, where tourism has taken over the population. We're convinced that our ancestors left us with a beautiful legacy, so we have to enjoy it and grow it but not destroy it. And, as you all know, the main destructor of this legacy is human. We need to be careful ... thinking about what we're going to leave to our children."

In addition to Windstar, two other cruise lines -- Paul Gauguin and Aranui -- routinely sail year-round voyages in French Polynesia. Greek line Variety Cruises recently announced it, too, will begin cruising there all year, beginning in January 2023.

But cruising isn't the only sector that's growing in this absolutely gorgeous destination.

Within the last few years, airlines have begun offering additional routes, including United's nonstop San Francisco-to-Papeete route, which kicked off in 2017, and Air Tahiti Nui's new nonstop route between Seattle and Papeete, which just started service this month.

Additionally, local infrastructure, including everything from transportation to Wi-Fi and cell service access, has greatly improved, and the French Polynesian government is funding a project to construct guest houses for tourists who wish to stay with Polynesian families while they're in town for a more immersive look at the local culture.

"We like to place the Tahitian, the Polynesian, at the center of [our tourism ambitions], Fritch said. "That's why, in our strategy for the next five years, we're talking about tourism for the Polynesians and by the Polynesians.... It starts with guest houses — living with the inhabitants, the Polynesians.... We have decided for French Polynesia to develop quality tourism. That doesn't necessarily mean it's high-end tourism.... Luxury is not for us. Quality is for us."

The area is also home to one of the world's largest marine sanctuaries, which recently shared plans for a major expansion that would grow the sanctuary to 350,000 square miles by 2030.

What's next for Windstar

Dovetailing with Star Breeze's inaugural French Polynesia voyage is the formation of a new three-year partnership between the line and Coral Gardeners, a Moorea-based organization that protects and rebuilds local coral reefs.

"This new partnership is a wonderful way for us to celebrate Tahiti during our 35th anniversary season, but more importantly to make a positive impact for the future of these incredible islands," Prelog said in a statement. "We've been focused on reducing our carbon footprint via updating our fleet's engines and operations, and this next step in climate action at sea is to partner with Coral Gardeners."

As for its hardware, Windstar recently finished stretching two other Star Plus-class ships — Star Legend and Star Pride — in addition to Star Breeze, to the tune of $250 million. It is also refurbishing its Wind-class sailing vessels, including Wind Surf, which got a completely new spa and lounge, and Wind Spirit and Wind Star, which have new Yacht Club cafes.

As for whether the line will look to acquire additional vessels or, perhaps, build new ones, Prelog said Windstar is always on the lookout for opportunities.

Related stories
What are points and miles worth? TPG’s December 2022 monthly valuations
Capital One Venture X to lose Priority Pass restaurants and spa services as of Jan. 1, 2023
December 2022
Current Hyatt promotions: Bonus points on stays and dining plus double stay credits
Featured image by ASHLEY KOSCIOLEK/THE POINTS GUY
Editorial disclaimer: Opinions expressed here are the author’s alone, not those of any bank, credit card issuer, airline or hotel chain, and have not been reviewed, approved or otherwise endorsed by any of these entities.