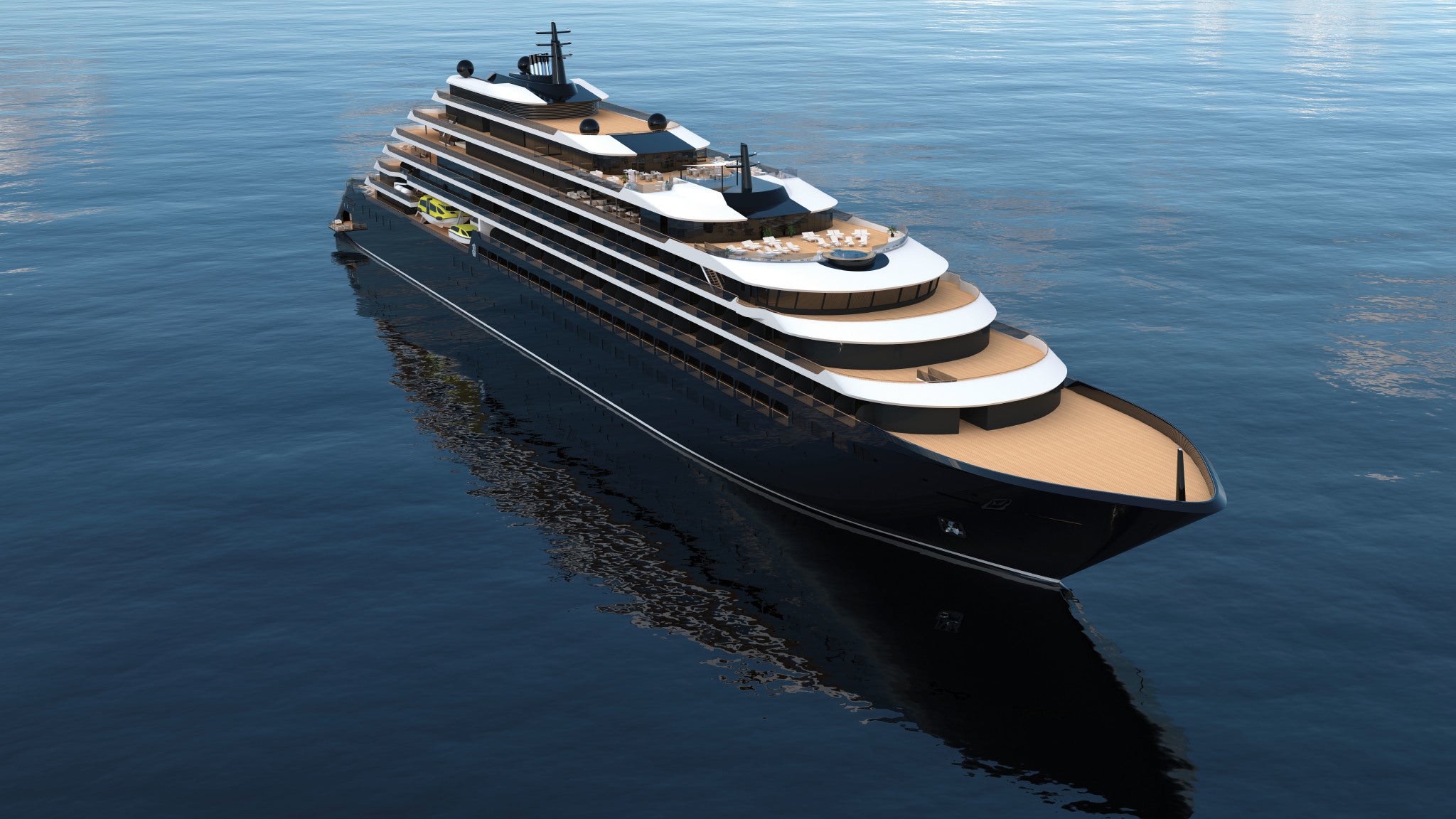 Will Two New Cruise Lines Radically Reinvent the Industry?
This post contains references to products from one or more of our advertisers. We may receive compensation when you click on links to those products. Terms apply to the offers listed on this page. For an explanation of our Advertising Policy, visit this page.

Cruising has always been convenient. You pack once, and then travel from site to site without hauling luggage or looking at maps. But sexy? Nobody would call it sexy — not until now. New cruise lines created by long-established travel companies, the Ritz-Carlton Yacht Collection and Virgin Voyages, are hoping to reinvent the genre.

To understand where cruising is going, you have to understand where it's coming from. Twenty years ago, the cruise experience was rooted in the past. Dinner was served at early and late sittings, with assigned tablemates and waiters. Mega-ships were full of neon and loud patterns, reflecting the casino design of the day. Luxury ships were understated, but played homage to historic hotel stalwarts with heavy drapes and stuffy furniture in subdued palettes. During the day, a band would play poolside on the Lido deck, which also had shuffleboard. Dress codes were prescribed, and guests stuffed gowns in their luggage for formal nights.

In a nutshell, none of it was modern, and it had an awful lot in common with Borscht-belt resorts in the Catskills.

It was budget-friendly Norwegian Cruise Line that started the tidal change toward modernization with their Freestyle cruising concept in 2001, allowing guests to eat wherever they liked whenever they liked with whomever they liked — and wear whatever they wanted. Since then, updates have come from other lines. Celebrity Cruises launched the first of their Solstice-class ships in 2008 with a new, chic design aesthetic. In 2015, Viking Cruises debuted their first ocean cruises — sleek temples of Scandinavian design — complete with a breathtaking (and complimentary) spa thermal suite. They broke more molds by mirroring their river cruises’ all-inclusive nature and focusing on the adults-only market.

Now, new lines are talking about taking the evolution of cruising a step further. And they’re getting in the game now for good reasons: In 2018, the Cruise Line Industry Association (CLIA) expects 27.2 million people around the world to take a cruise, and says that demand for cruising has increased more than 20% in the last five years.

As the industry grows, the race is on for new-to-cruise passengers. Royal Caribbean, for example, has worked hard to attract first-time customers with high-adrenaline activities, including bumper cars, skydiving and surfing simulators, and laser tag. Their “Come Seek” ad campaign sought to overcome negative impressions about cruising by declaring that “Royal Caribbean is not a cruise. It’s the world's most innovative adventure company.”

And in April, Uniworld launched their new “U by Uniworld” river cruise line, designed to attract younger 20- to 40-something travelers to a market once dominated by retirees.

On Monday, reservations opened for the Ritz-Carlton Yacht Collection, the first foray into cruising by the luxury hotel chain. The collection has three as yet unnamed ships under construction, and Ritz-Carlton says that the yachts will be a big departure from what’s available now, though few details are available to support that claim. Somewhat surprisingly for ships built by a resort chain with such a large portfolio, the vessels will be small — just 298 passengers, similar to the capacity of some Seabourn and Windstar ships — with an elegant, residential look.

There will be a marina — like on Windstar, Sea Dream Yacht Club and Seabourn vessels — and renderings depict a small aft-facing infinity pool, similar to the one on Viking Ocean vessels. In addition, Ritz-Carlton has taken a cue from competitors, and already has a celebrity chef partnership in place: The first ship will feature an á la carte restaurant from Sven Elverfeld of the three Michelin-starred Aqua in the Ritz-Carlton Wolfsburg, Germany. Drinks, including beer, wine, and most spirits, will be included in the cruise fare. But dinner at Aqua will not.

Then there's Virgin Voyages, the new cruise line from Richard Branson’s Virgin Group, which intends to create three adults-only ships (due for delivery starting in 2020) that will appeal to their hip travelers. Catering to an 18-and-up crowd, and hoping to serve travelers who hadn’t considered cruising cool, they are — like Royal Caribbean — distancing themselves from cruising, calling travelers “sailors” and trips “journeys.”

Another part of their plan is to evolve the look and feel of their ships into something more akin to innovative design on land. Virgin Voyages executives chose only designers who have never worked on ships before, but instead create dramatic spaces in luxury hotels, nightclubs and restaurants, as well as movie sets.

Early renderings show that, in some spaces, the bold retro-futuristic vibe is indeed a 180 from what you would find on ships today. Virgin hasn’t yet released much information about the activities onboard or shore excursions, so it’s hard to say just how outside-the-box the experience will be. While there will be a casino, there won’t be Broadway-style stage shows. Nightlife will reflect the company’s party-loving “young at heart” attitude. The ship’s nightclub, The Manor, has a stage designed by Roman and Williams, known for Manhattan’s Ace, Viceroy and Highline hotels — as well as the set of “Zoolander.”

Entertainment, a spokesperson told The Points Guy, will be “dazzling and unlike anything else at sea." We'll just have to see.

One thing both the Ritz-Carlton Yacht Collection and Virgin Voyages can offer that will surely set them apart from the competitive cruising pack: synergy with their existing travel brands.

Both companies promise to offer packages that combine existing products with their new cruises. Additionally, the Ritz-Carlton Yacht Collection will have its own loyalty program, a spokesperson told TPG, and they plan to announce benefits for members of Marriott Rewards, Ritz-Carlton Rewards and SPG (Starwood Preferred Guests) soon. Unfortunately, that's all anyone seems to know at this time about redeeming or earning points for sailings, or counting yacht bookings toward elite status. Right now, at least, bookings can only be made with a credit card or by wiring money.

When asked, Virgin Voyages said it's considering a points-focused partnership with other Virgin companies (including, potentially, the airlines) but has not yet announced any details.

And the Ritz-Carlton is also leveraging their hotel brand by managing onboard spas themselves, which could mean a big improvement over the cruise ship spas that are run by Steiner, a company known for hard-selling products during treatments. Like its hotels, the family-friendly Ritz-Carlton Yacht Collection (which allows children over six months of age to sail) will have a “Ritz Kids” drop-off program for kids ages 4 to 12. Cruisers will also have access to a concierge to help them plan private, custom land tours.

Those who believe these new lines are indeed game changers will be happy to hear that the future is, well, now. The Ritz-Carlton’s first voyages — in Europe, New England and Canada, Latin America, and the Caribbean — may have gone on sale Monday, but TPG was among one of the first buyers during a priority access booking window for Ritz-Carlton and Marriott Rewards loyalty members. He paid $16,600 for a 10-day inaugural cruise departing from Fort Lauderdale and calling on Samaná, Santo Domingo, Vieques and Fort-de-France (among others) en route to Bridgetown in February, 2020.

Sailings on Virgin Voyages’ first ship, which will operate seven-night Caribbean cruises out of Miami, are expected to go on sale at the end of the year.