'If we wait ... the world is cooked': Rolls-Royce's outgoing CEO on sustainable propulsion and his legacy

Articles
Ethan Klapper is a senior aviation reporter at TPG who focuses on the operational side of the airline industry.
Follow
April 18, 2022
•
9 min read 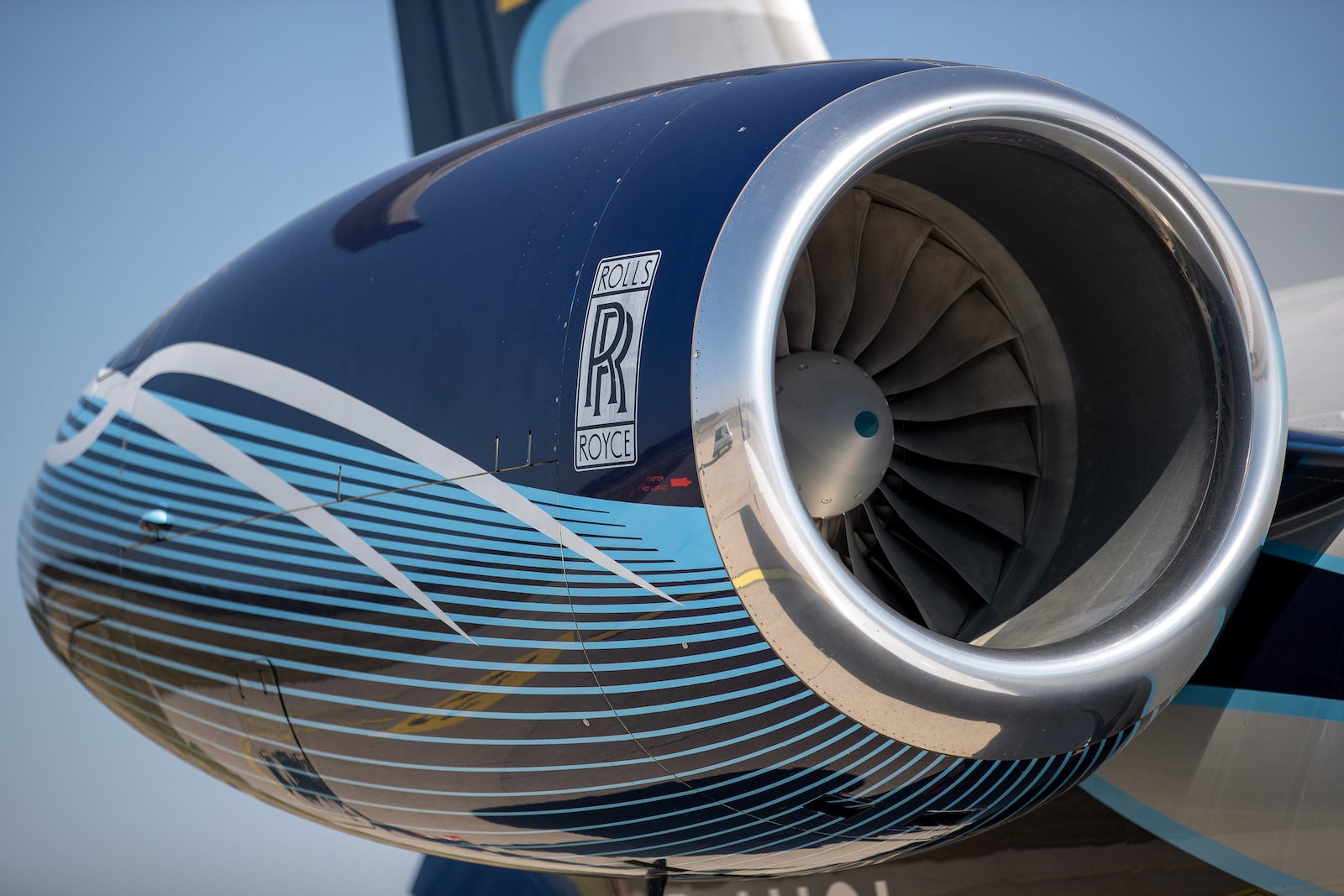 Warren East does not mince words when talking about climate change.

The outgoing CEO of Rolls-Royce — the British propulsion company that manufactures the jet engines found on the Airbus A350, the A330neo and some Boeing 787 Dreamliners, among many other aircraft — recognizes the need for the aviation industry to do more.

"If we wait for the ideal technology to be available, then the world is cooked," East said during an exclusive interview with TPG in New York. "We miss the net-zero targets. We miss the temperature rise targets."

Rather than wait for electric- or hydrogen-powered aircraft to become viable at a scale large enough to have a real impact, companies like Rolls-Royce must take incremental steps now to reduce carbon emissions. But bridging the gap is far from easy.

In a world where 3%-4% of global emissions come from commercial aviation, it may seem like a tall order to reduce the impact airplanes have on our environment, but East has a few ideas.

Recognizing the need to move away from traditional jet fuel, which is produced using kerosene, a liquid that releases greenhouse gases like carbon dioxide when it's burned, East — and others in the industry — is turning to sustainable aviation fuel.

A cleaner-burning version of standard jet fuel, SAF is made from different components (known as feedstock), including corn grain, algae and various waste products like wood mill residues and even used cooking oil.

Last month, an Airbus A380 flew with one of its four Rolls-Royce engines powered entirely by SAF made of used cooking oil. That followed a similar flight last year involving an Airbus A350.

"We have to do something now — and what we can do now is SAF, and the only real limitation on SAF is creating it and ensuring sufficient supply of it and ensuring that it is produced in a genuinely sustainable way so that we're not competing with agriculture and driving enhanced deforestation around the world because that's sort of at a system level shooting yourself in the foot," East said.

One of the company's prominent SAF-related efforts is its partnership with startup Boom Supersonic to develop a SAF-powered engine for its Overture supersonic transport, which United Airlines ordered 15 of last year. Entry into service is scheduled for 2029 — an aggressive timeline many in the industry are skeptical about, especially with a still-to-be finalized engine. While East didn't have any updates on the partnership, he noted that the industry is past the point of no return on SAF-powered engines.

"If you are going to be pursuing something like supersonic travel, then the notion of doing it without SAF would be commercially untenable," he said.

The company's deep involvement with SAF will be a key part of East's tenure as CEO, which is coming to an end later this year when he steps down. He views his time at the top of the company as one where he reoriented it for a cleaner future.

"When I joined the company [in 2015], 96% of the revenues were about setting fire to fossil fuel," he said. "And I look forward at that point to 2050 and say, right, it needs to be net-zero. That's only one-and-a-half product generations away."

But down the road, the company also sees potential with electric propulsion, especially electric vertical takeoff and landing, or eVTOL, which, in current form, often take the shape of a giant quadcopter. East said that in 2001 and 2002, it was hard to see smartphones overtaking flip phones as briskly as they did, and the catalyst was a visionary company like Apple. He sees room for a company like that in the eVTOL space as well.

"So when we electrify helicopters, which is essentially what we're doing with eVTOL and things, we're breathing some new technology across something which already exists, and we're removing barriers and things like safety and cost are better in an electrical world than in a mechanical world," East said.

However, it will be a long time before we see 100% electric aircraft flying across oceans, according to East. He also offered a word of caution about hydrogen propulsion.

"Storage is an issue because hydrogen is intrinsic," he said. "They're very small molecules, so they can get through very small spaces, and in its natural state as a gas it's got great energy density per weight but rubbish energy density per volume." Because hydrogen molecules take up a lot of space, they require massive storage tanks, making this approach difficult to scale up and implement in a viable way, according to East.

Once the same company, the two groups have been charting separate paths since the early 1970s, when the development of the RB211 turbofan engine for the Lockheed L-1011 TriStar — which later found a home on the Boeing 747, 757 and 767 — caused Rolls-Royce to enter receivership in an effort to avoid bankruptcy. BMW now owns the auto company, while East's company, Rolls-Royce Holdings PLC, is a publicly traded business based in the United Kingdom.

East has no qualms about sharing such a famous brand.

"We're very happy to use that brand as an asset," he said. "It's a coexistence, if you will — it's absolutely a coexistence. And, it's not one that I would seek to distance the company from at all, but I do seek to build on it and say, you know, our company Rolls-Royce PLC is about power."

East hopes to leverage the brand into something its customers — and the general public — see as being synonymous with sustainability.

"It's not about cars," he said. "Over the next several decades it's about net-zero [carbon emissions] and enabling our customers to get to net-zero by 2050, and leading by example, and making sure that we ourselves are net-zero by 2030."

So, in addition to its commercial and business aviation propulsion business, Rolls-Royce has a large defense business, as well as a power system business, which creates microgrids (or self-contained power generation and distribution systems that use renewable energy such as solar power and wind turbines) for various applications.

Reflecting on his time as CEO

East's legacy will undoubtedly be partly shaped by how he steered the company through the COVID-19 pandemic while maintaining his commitment to finding more sustainable solutions for the aviation industry.

Rolls-Royce was particularly exposed because of a key part of its business model known as power by the hour, where airlines pay a flat, hourly fee to Rolls-Royce to use engines and in return, Rolls-Royce covers all of the installations, maintenance and decommissioning work. With much of the global airline fleet grounded throughout the pandemic, that represented lost revenue for the company.

While the company has shrunk its commercial engine business as a result of COVID-19 and the fact that that product line focuses on longer-haul wide-body aircraft, it hasn't stopped the business's efforts to innovate and pivot as needed, according to East.

"If we get back to 2019 levels by 2025, say then the rest of the world's economy has grown in that time by circa 30%," he said. "So long-haul aviation is a smaller piece than it was — and that's changed habits that's driving that. We have to recognize that. So, we have effectively resized our civil business for much smaller levels of demand."

East sees his previous stint as an engineer in the semiconductor industry, which aids in the ongoing innovation taking place in Silicon Valley (where many propulsion industry startups focusing on eVTOL are based), as an asset during this shift in the business.

"I think some of that mentality that's in the semiconductor industry needed to come into the world of aerospace and industrial technology," he said.

Although there's still work to do to lessen the aviation industry's carbon emissions, East is confident the company's next generation of engineers will be able to design new eco-friendly propulsion technology that is better for the environment.

"What excites me about it is — and why I wish I was 20 years younger — is it's an opportunity to actually make a huge impact on the world for the better," he said. "I'm an optimist about technology solving our biggest problems. Climate change is one of our biggest problems — food supply, water supply and health are other big problems — but energy is fundamental because actually, it goes across those other three. We need to continue weaning ourselves off fossil fuels as a society — as a race."

Related stories
Chasing American Airlines elite status? Here are 14 ways to earn Loyalty Points
Fly to Greece from multiple US cities for less than $700
American Airlines restores free 24-hour hold option
Holiday airfare is rising: What to know if you haven’t booked yet
Featured image by dpa/picture alliance via Getty Images
Editorial disclaimer: Opinions expressed here are the author’s alone, not those of any bank, credit card issuer, airline or hotel chain, and have not been reviewed, approved or otherwise endorsed by any of these entities.