Now is the perfect time for a trip to Dominica 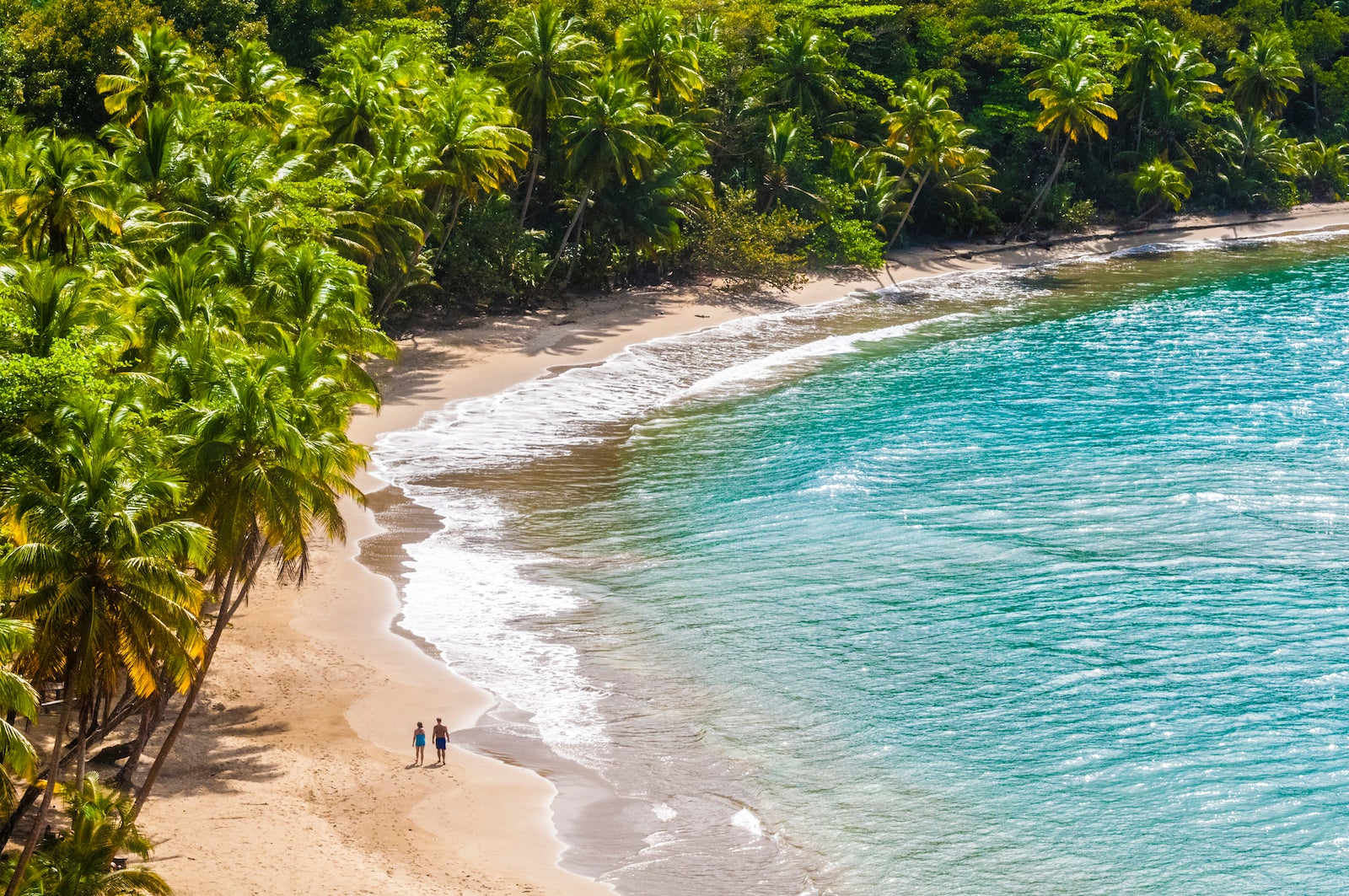 Just south of Guadeloupe and north of Martinique is Waitukubuli, meaning, "tall is her body" in the Kalinago language. But this island in the Caribbean is better known as Dominica, the name bestowed by colonizer Christopher Columbus.

This little-known commonwealth in the Eastern Caribbean won sovereignty from Britain in 1978. English is the official language, making it an easy, yet sorely underrated, destination for travelers from the U.S., sometimes confused with the Dominican Republic.

Dominica's tourism infrastructure was devastated in 2017 by Hurricane Maria, but the aptly named Nature Island is aiming to be the world's first climate-resilient nation by 2030. A number of luxury resorts have recently debuted or reopened, so now is a great time to travel to Dominica, if you want to visit before everyone else.

When to visit Dominica

Hurricane season (July and August) is months away, though the island isn’t usually a high-risk destination. Before Maria, the last deadly storm was Hurricane David in 1979. The best weather is from October through March, which is also peak whale-watching season.

March is one of the most popular times to visit because of the island's two-day carnival, known as Real Mas and held on the Monday and Tuesday before Ash Wednesday. Travelers can enjoy calypso music, pageants and dance performances. The World Creole Music Festival is the biggest festival in Dominica and is usually held in October around Independence Day. Dive Fest in July is popular among the diving community and is the longest-running watersport festival in the Caribbean.

Related: 7 little-known Caribbean destinations you should discover — before others do

Beno Pascal has been working in tourism for the last two decades as a driver and tour guide. After Hurricane Maria, he was without work for months.

“The whole season went down the drain. It was going to be one of the most promising seasons with many cruise ships coming in. My entire revenue stream was gone,” said Pascal. “We’re resilient people. What we’re trying to do as a country is encourage visitors to come back and see Dominica as the place of choice when you think of the next holiday. You can get out of the hustle and get involved in nature activities with lots of beautiful adventure,” he said.

The verdant island is off the beaten path. It's one of the last frontiers of the Caribbean, with breathtaking natural features to explore. Morne Trois Pitons National Park is a UNESCO Natural World Heritage Site with a 4,400-foot-high volcano and four other volcanoes, as well as hot springs, freshwater lakes and the second-largest boiling lake on earth. According to UNESCO, the tropical rainforest has the richest biodiversity in the Lesser Antilles.

Dominica is also the youngest island geologically in the Caribbean -- 26 million years old. Dominica boasts the highest concentration of dormant volcanoes in the world with the most volcanoes per square foot. The island’s national parks, forest reserves and marine reserves have been fully restored since the hurricane. Even the winding island roads are new, making driving in the country a breeze.

With 365 rivers, water sports are popular with tourists. You can snorkel above underwater volcanoes with Nature Island Dive at Champagne Reef in the Soufriere/Scotts Head Marine Reserve, go canyoneering down waterfalls with Extreme Dominica and soak in rustic outdoor tubs filled with natural hot spring water at Ti Kwen Glo Cho in Wotten Waven.

Although Dominica isn’t known as a beach destination, it has some spectacular stretches of shoreline, including Red Rock — an almost Martian landscape carved by the sea near Calibishie — and the Secret Bay cove, which is only accessible by kayak.

Jamaican traveler Spencer May visited the island for the first time in July. “Dominica is a gorgeous island with natural untouched beauty that I haven’t seen anywhere else in the world ... You could explore a new [river] every day of the year. I thought that was amazing! Trafalgar Falls was breathtaking, the power and sheer volume of water was incredible,” he said.

An unlimited Dominica National Park pass is $12 for a week, or pay $5 per site. With the pass, tourists may enter the Emerald Pool, Cabrits National Park and Fort Shirley, Trafalgar Falls, Middleham Falls, Soufriere Sulphur Springs, Boeri Lake, Indian River, Boiling Lake, Syndicate Forest and a handful of other trails and lakes. The fees go to conservation and sustainable maintenance.

Visit the Kalinago Barana Aute in the Kalinago Territory to learn about the first people of Dominica. At the cultural center’s small museum, a tour guide will give you a detailed history of the indigenous people and their struggle against colonization. Dominica is the only Eastern Caribbean island that still has a population of pre-Columbian native communities, the Kalinago people, referred to by colonizers as Caribs. Kalinago people are believed to have come from South America, and their traditions can be traced back to 3,000 B.C. Stroll through the replica Kalinago village to learn more about their communal way of living.

Restaurants around the island serve Dominica's specialties, including the savory green callaloo soup and sweet cassava pancakes. Pagua Bay House, near the airport, offers beachfront dining with a seasonal menu of traditional dishes (dasheen puffs, coconut curry and a glass of the signature rum punch). At Le Petit Paradis, in the Roseau Valley, enjoy grilled breadfruit and ginger beer with an epic view of the surrounding jungle. Or order freshly caught seafood such as lionfish at POZ Caribbean Restaurant. For something sweet, drop by the chocolate factory at the 25-acre Pointe Baptiste. Save room for infused rum punches at Islet View.

A new era of tourism

"With a handful of new properties opening and under construction on the island, Dominica is positioning itself strongly in the luxury market and is now able to offer visitors a range of accommodation options. Dominica keeps sustainability and ecotourism top of mind and offers visitors access to a wide variety of outdoor adventures both on land and sea," said Colin Piper, CEO of Discover Dominica Authority.

The 151-room Cabrits Resort & Spa Kempinski Dominica opened its doors in late 2019. (Book it through the Chase Luxury Hotel & Resort Collection for elite-like perks.) The luxury resort is dedicated to supporting the local community and preserving the environment. The hotel employs more than 300 residents who earn double the local wage, including artisans for craft demonstrations and people who plant trees that were uprooted during construction.

Marriott and Hilton are slated to join Kempinski on the island. Tranquility Beach, a Curio Collection by Hilton, is building a 60-room beach resort. If you invest in the property you’ll become a Hilton Honors Gold member and instantly earn 1,250,000 points (though we can think of a few easier ways to earn Hilton points). Marriott’s Autograph Collection will open the Anichi Resort & Spa in 2020. Both international hoteliers have strict sustainability policies and will contribute to the local tourism infrastructure.

Both American Airlines and Delta expanded their Caribbean reach with Silvery Airways codeshare agreements in late 2019. Travelers will want to fly first to San Juan, Puerto Rico (SJU) and connect there on a Silver Airways flight to Douglas-Charles Airport (DOM). JetBlue has a partnership with LIAT, which offers direct connections to Dominica from Antigua (ANU) and Barbados (BGI), and a handful of other Caribbean islands offer connections to Dominica.