Articles
Ashley Onadele is a writer for sponsored content at TPG and an avid family traveler. She has traveled to over a dozen countries and counting.
Follow
June 23, 2022
•
6 min read 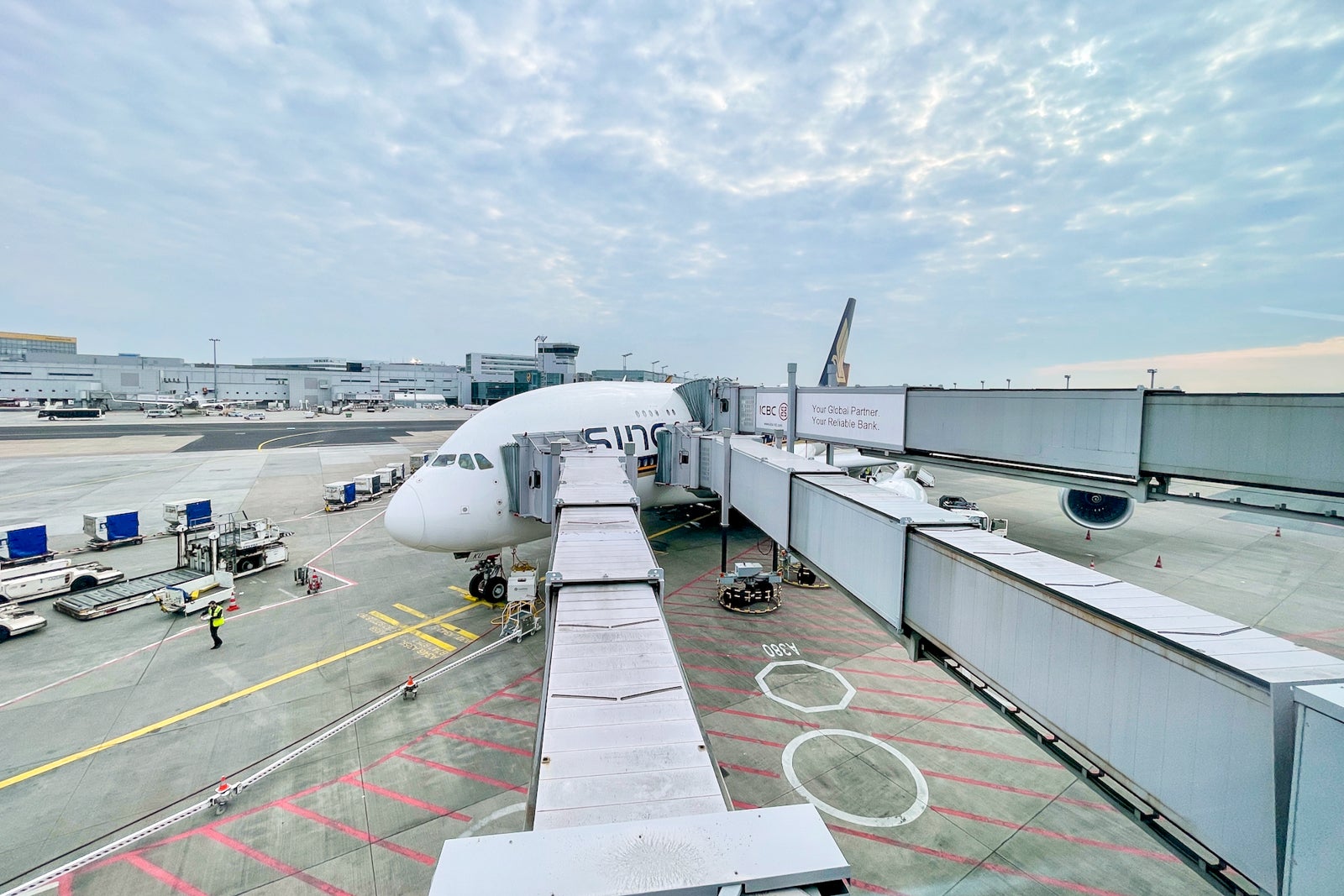 I live in the San Francisco Bay Area — and when I awoke to the news that Singapore Airlines would soon be devaluing their loyalty program, I may have panicked. Okay, I definitely panicked.

You see, while Singapore Airlines is a fantastic airline with world-class premium cabins, the options for flying the airline from the West Coast are pretty much limited to flights to Asia.

The pool of points I had sitting in my KrisFlyer account was from a canceled trip to the Tokyo Olympics — and I had been hoping to save them to get in that trip to Tokyo sometime in the future. When I learned that my precious, hard-earned points would be worth less — though thankfully not worthless — if I didn't book something ASAP, however, I knew I had some trip planning to do.

So, I asked my buddy Kyle — who I consider to be a legitimate points and miles genius — for his help in figuring out how I was going to use 184,000 Singapore KrisFlyer miles on an itinerary taking us from San Francisco to Europe.

It's a story of disappointments and revelations — but thankfully, one that has a happy ending.

Here's how I used my Singapore KrisFlyer miles before the upcoming devaluation.

I've watched the summer Olympics since I was a child and it's always been a dream of mine to attend the games one year. That year was going to be 2020 and I was beyond excited to travel to Tokyo for the Games.

For our trip, I'd booked two one-way, business-class award tickets on Singapore Airlines for 92,000 KrisFlyer miles each, with points transferred from Chase Ultimate Rewards and American Express Membership Rewards. When the games and our flights were canceled, we got all of our points back but they were essentially stuck with Singapore Airlines — it was impossible to transfer them back to Chase or Amex. This didn't seem to be a big problem because the expiration date for KrisFlyer miles kept getting extended thanks to the airlines' COVID-19 support measures; I assumed I would just use them to get to Japan when Japan finally reopened.

A devaluation was a very real possibility, but I had hope.

As I have said, Singapore Airlines is a great airline for flying from the West Coast to Asia, but Asia wasn't in the cards for us within the next year due to already pending vacation plans. That's where Kyle comes in. I asked Kyle how I could use these miles to get to Europe even though I was only familiar with people flying Singapore Airlines to Europe from the East Coast.

After a lot of back and forth, we concluded that, at least with miles, there weren't many options for flying from SFO to Europe, at least not when I would be traveling in early April. We checked SFO to Milan Malpensa Airport (MXP), Rome Fiumicino Leonardo da Vinci Airport (FCO) and London's Heathrow Airport (LHR) for a spring break trip to Italy. We didn't have any luck finding award space on Singapore Airlines or on other Star Alliance airlines. I began to think we were going to have to "fly somewhere to fly somewhere" — in other words: fly to an airport that had the flights we wanted.

Kyle received a promotion detailing KrisFlyer redemption from Houston's George Bush Intercontinental Airport (IAH) to England's Manchester Airport (MAN) or from New York's John F. Kennedy International Airport (JFK) to Germany's Frankfurt Airport (FRA) for as little as 72,000 KrisFlyer miles one-way. I did a quick search to see how easy it would be to get to Milan from Manchester or Frankfurt and decided that JFK-FRA was our best bet.

After a bit of mental math on what our travel time would look like if we went SFO to JFK to FRA and on to MXP, I decided that the trip was worth it when I factored in that we could easily break the trip up and take our time getting to New York from San Francisco.

Fingers crossed that we don't experience the same headache that director of content Nick Ewen faced on a recent trip to Crete with his family.

I was shocked when I found four business-class tickets available for 72,000 KrisFlyer miles one-way from JFK to FRA still available, and at a time that worked perfectly for my family.

Next, I did some quick math: I would need 288,000 miles to get these seats but I only had those 184,000 miles in my account. This left me with a deficit of 104,000 miles. Thanks to transfers from Amex and Capital One, I was able to transfer the remaining miles I needed to secure our seats.

Related: How to transfer Capital One miles to airline partners

I later found out that we would be flying in their new business-class seats on one of the airline's A380 aircraft — a sweet surprise. At the time of writing, there is still saver award availability for JFK to FRA in early spring 2023.

I had 184,000 miles essentially stuck with Singapore Airlines from canceled travel to Japan for the Toyko 2020 Olympics. When Singapore Airlines announced that a 10% devaluation of their award flights was coming in just a few short weeks, I went into panic mode to figure out how I was going to redeem my miles ASAP.

Thankfully, my colleague Kyle stepped in to save the day. He helped me find business-class award flights from JFK to Frankfurt, Germany for a spring break trip to Italy in 2023 for just 72,000 KrisFlyer miles each one-way.

While this itinerary won't be the most convenient due to having to catch positioning flights to New York, I'm confident that the comfort of lie-flat seats and the airline's signature "Book the Cook" inflight dining will surely make up for it.

Related stories
Chasing American Airlines elite status? Here are 14 ways to earn Loyalty Points
Fly to Greece from multiple US cities for less than $700
American Airlines restores free 24-hour hold option
Holiday airfare is rising: What to know if you haven’t booked yet
Featured image by (Photo by Benji Stawski/The Points Guy)
Editorial disclaimer: Opinions expressed here are the author’s alone, not those of any bank, credit card issuer, airline or hotel chain, and have not been reviewed, approved or otherwise endorsed by any of these entities.