Articles
Summer Hull , aka Mommy Points, ran the Mommy Points site for families who want to travel more for less using miles and points for seven years. She now heads up a variety of special projects at TPG when she isn't exploring the world with her own two girls.
Follow
Nov. 08, 2019
•
6 min read 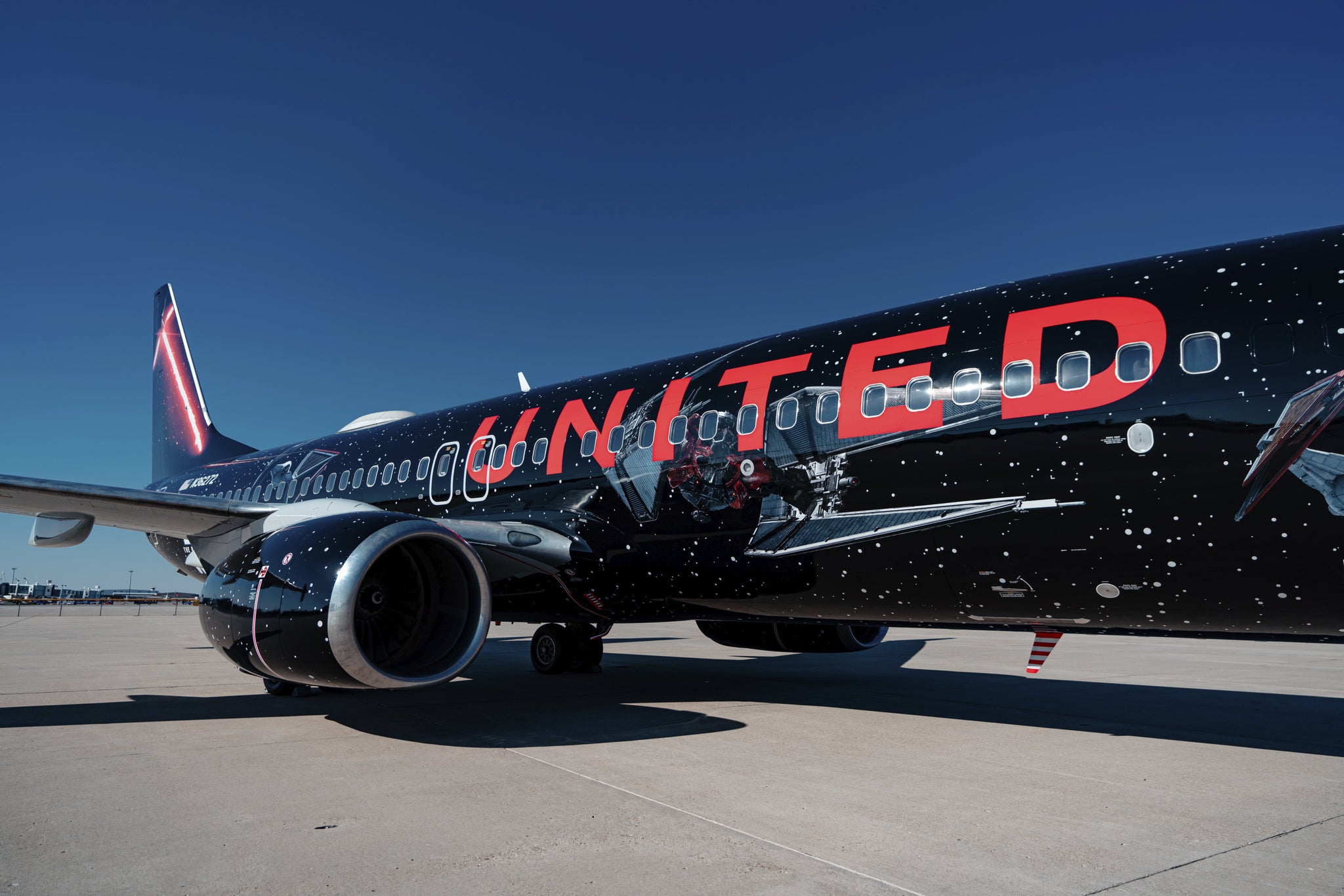 Ever had a stormtrooper hand you a goodie bag as you stepped onto an airplane with a live symphony playing Star Wars music in the background? Me either.

But lucky travelers on United flight 1644 from Houston (IAH) to Orlando (MCO) on Nov. 7 had this exact experience as the first passengers on board the airline's new Star Wars-themed plane. Talk about a travel adventure of galactic proportions.

Those lucky travelers heading to Orlando at 2:30 p.m. on Thursday afternoon were surprised with not only the freshly painted Star Wars plane, but also Star Wars-themed wall coverings, boarding signs, speeches, droids and even a live orchestra. (And they said the Golden Age of travel was dead.)

While the majority of those enjoying the airport festivities appeared to be United employees, there were also some traveling families and children who just so happened to find themselves booked on the flight of a lifetime.

In addition to goodie bags and festivities in Houston, United gave customers on the first flight movie passes and Star Wars-themed amenity kits to celebrate the occasion.

Rumor has it that Star Wars Mickey ears, courtesy of Disney (who now owns the Star Wars franchise), were awaiting those flyers upon touchdown in Florida.

This United Boeing 737-800 has an eye-catching paint job complete with lightsabers and spacecraft.

On the inside, there are headrests that represent both the light and dark side. (That's First Order and Resistance, for those new to the saga.)

These's even a plaque onboard dedicated to the Rise of Skywalker.

And you don't have to be on board to enjoy the fun. You can track the plane with its tail number (N36272) on FlightAware, where it will display as a special Star Wars icon and name: the X-Wing starship. It's basically a Star Wars AvGeek's dream come true.

In the coming days, the plane is scheduled to fly to Houston, Chicago (ORD), Seattle (SEA), Boston (BOS) and San Francisco (SFO). Keep in mind that the planned schedule is always subject to change.

In keeping with the theme, United will offer Star Wars-themed amenity kits to its premium passengers on eligible flights across the fleet. Expect the socks, eye masks and even the amenity kit bag itself to pay homage to the universe that's home to Luke, Leia, Rey, Chewie, Kylo, R2-D2 and more.

Staying safe in the galaxy

Whether you fly the Star Wars-themed plane or not, Star Wars may still be on your next United flight thanks to a new safety video that goes all-in on classic John Williams tunes and characters from a galaxy far, far away. Part of the safety demonstration is even delivered by hologram. Because, of course.

Use miles to see the Star Wars premiere

If you want to do more than fly on the Star Wars plane, United's MileagePlus members can cash in miles to see the December premiere of "Star Wars: The Rise of Skywalker" in either Los Angeles or London through the MileagePlus Exclusives program.

These auctions will undoubtedly go for hundreds of thousands of miles, but each includes two tickets to the premiere, along with flights, accommodations and other Star Wars goodies.

If you're working with a smaller mileage budget, Star Wars-themed amenity kits and other extras are also available via the Exclusives program.

Seeing the Star Wars plane load up with its first passengers yesterday didn't just put a smile on my face -- there were plenty of smiles to be found around Terminal E. Even something as small as changing out a normal boarding sign for one with Rey on it can be enough for a chuckle at the airport.

While the symphony has packed up and gone home, the plane will be flying for some time to come. May the force be with you in your quest to fly this special bird.

Related stories
Legislation that could gut credit card rewards set to move through Congress
Would you stay at 1 of these 8 haunted hotels this Halloween?
Southwest winter flash sale: Get one-way flights for as low as $29
You can currently buy points and miles with up to a 100% bonus — but should you?
Featured image by (Photo courtesy of United Airlines)