We Got a First Look at the Incredible New St. Regis Hong Kong 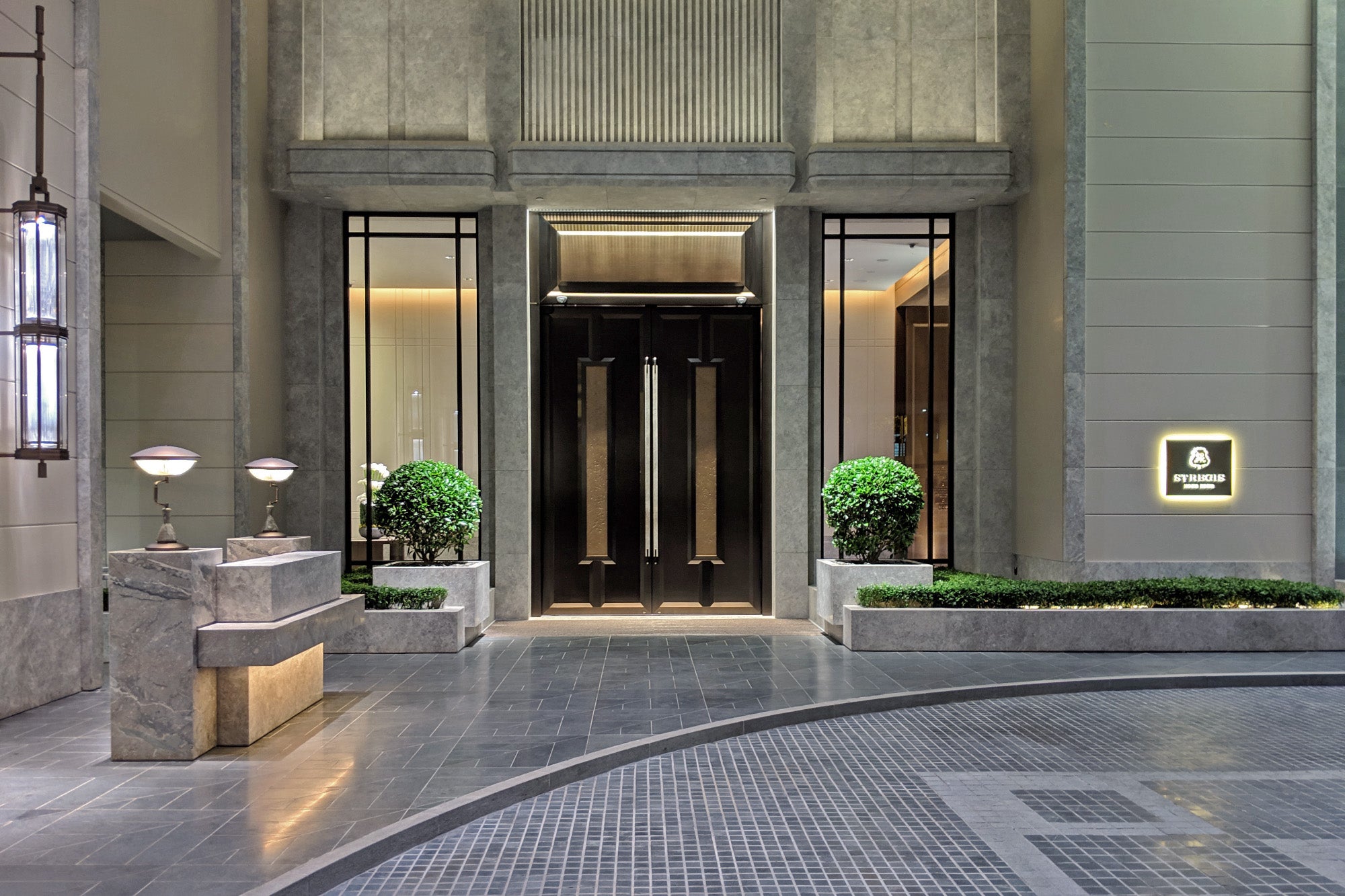 Rarely does a hotel spark so much interest that it lands a coveted spot on our list of 2019's most anticipated hotels — twice — but the St. Regis Hong Kong is no ordinary hotel.

Until this month, our impressions were limited to a few renderings and generous official descriptions. But the hotel, owned by China Resources Property and managed by Marriott, is welcoming guests for the first time today.

While I missed the opening by a few days, during a recent visit to Hong Kong — following my review of United's new Premium Plus — I had a chance to step beyond the pre-opening barricades for a private tour with the staff.

The St. Regis Hong Kong is located in a bustling area called Wan Chai, not far from the convention center and a short walk from the StarFerry terminal, offering a speedy, scenic and cheap (as little as $0.30 each way) crossing to the more traditional side of Hong Kong, Kowloon.

I was immediately impressed by the hotel's grand entrance. And once inside, the rush-hour traffic I experienced just moments before quickly faded.

It may sound cliché, but even the ground-floor lobby felt like a sanctuary compared to the commotion just a few feet away.

Check-in is actually completed with your St. Regis Butler inside your guest room, but the concierge and a butler staff attendant are available in the "Great Room" — the second-floor lobby you'll need to pass through when transitioning away from the city.

The hotel was designed by Hong Kong-based André Fu, the same interior designer responsible for The Upper House, which TPG didn't especially care for during his visit in 2015. While I haven't had a chance to visit The Upper House myself, I thought the St. Regis was stunning.

From the marble floors to the grand elevated lobby and the thoughtful light fixtures — inspired by "old Hong Kong" street lamps I'm told — it's clear that no expense was spared here.

Starting on the second floor, there's the namesake St. Regis Bar — featuring a craft cocktail menu, light bites and entertainment by jazz musicians in the evening — and the Drawing Room. Here, guests will find an elegant space that extends outside to the Astor Terrace. It's where the hotel hosts its signature Afternoon Tea and serves an international à la carte menu.

The hotel also has a French-focused restaurant, L'Envol, helmed by chef Olivier Elzer, who has worked at (and owned) a number of Michelin-starred restaurants. During lunch and dinner, guests can watch contemporary French dishes materialize from the open kitchen.

While they weren't yet open for business — the staff was undergoing training at all of the establishments ahead of the grand opening this week — I had a chance to tour all four food and beverage outposts.

The Drawing Room is located just off the main lobby, and consists of the indoor area pictured above, along with a furnished terrace just beyond.

While you won't be able to completely escape the hum of Hong Kong — and the construction all around — I could picture this space being tranquil in the evenings, with its traditional moon gate and a long centerpiece water feature.

Just inside, you'll find the St. Regis Bar — a staple of St. Regis hotels around the world. And, while small, the Hong Kong property's is among the best I've seen.

Each St. Regis offers its own custom Bloody Mary, and the Hong Kong property has dreamed up the Canto Mary, crafted with a tangerine peel and whisky.

Next, I stopped by Rùn, the hotel's on-site Chinese restaurant, which will serve traditional Cantonese dishes.

The hotel hopes its restaurants will lure not just in-house guests, but also discerning locals.

While I generally prefer to focus on local cuisine when traveling, I'd certainly be tempted to make a reservation at L'Envol.

With contrasting marbles and white tablecloths, this is the hotel's most upscale restaurant.

The hotel offers more than 800 different wines, including 100 Champagnes — many of which are on display throughout L'Envol.

The hotel offers a small spa — there's one treatment room available now, with a second coming next year. Guests can book in-room massages as well.

That's also where you'll find the gym — the "St. Regis Athletic Club," if you will — complete with a variety of brand-new cardio equipment and free weights.

Around the corner, the Verandah has a heated outdoor pool and a walk-up bar, reserved exclusively for hotel guests.

The 27-story tower has 129 guest rooms, including 17 suites. Most fall into the Deluxe category — the base room type — and fortunately there was one available for me to tour.

Subtle regional design elements make an appearance here as well, from the light fixtures to the shutters above the bed.

Deluxe rooms measure 538 square feet, and that's quite generous for Hong Kong. It's enough room for a king-size bed, a four-seat dining area and a large, well-stocked in-room bar.

The hotel incorporated high-tech features throughout, such as bedside electronic controls and USB ports — including two beside the toilet.

Even the base rooms have large bathrooms, with double sinks, Remède amenities and more.

There's also a separate shower and a large soaking tub, along with a television mounted in the mirror.

I also had a few minutes to explore a St. Regis Suite — this is the base suite, so Bonvoy Platinum, Titanium and Ambassador guests may be upgraded here, assuming one of the 10 is available upon check-in. There are also four nearly identical suites on higher floors with harbor views, in the "Metropolitan" category, and complimentary upgrades may be available there as well.

Suites include a decent-size bedroom, a large living room and a sizable bathroom, complete with two walk-in closets.

You'll find the same soaking tub available in the base rooms, but here you get a view.

Speaking of the view, you can see a sliver of the harbor, but mostly you'll be staring at the nearby skyscrapers — while I didn't get to see one, apparently the Metropolitan suites are what you're after if you're hoping to enjoy a bit more scenery.

While weekday rates tend to be far higher in some destinations — like New York City — that doesn't appear to be the case with the St. Regis Hong Kong. It's expensive every day of the week!

During opening month — above — the lowest rate for a base room is 4,802 Hong Kong dollars, or about $612. Rates begin to drop during the hot summer season, but they're still quite high, especially considering that, at these base prices, you won't be entitled to a refund.

On days with the lowest rate, you'll pay the following for the various room types:

This hotel falls under Marriott's new top-tier Category 8, so award nights don't come cheap. Base rooms require 85,000 points per night, though you are eligible for the fifth night free on stays of five nights or longer, in which case you'd redeem 68,000 points per night.

The good news is that the St. Regis doesn't appear to be playing any games with award availability — if there's a base room to book with cash, it's yours on points. That means the calendar's pretty much wide open, except for a few nights in December and January when base rooms are already booked up.

Points stays can be canceled until one day before arrival, and there's no service charge or tax to pay. Considering rooms with two queen beds are priced the same on points, and refundable rates start at 5,390 HKD ($687), after the 10% service charge, that means you'd be getting at least a $687 value from your 85,000-point redemption, which works out to 0.81 cents per point in value — almost exactly in line with our valuation.

You won't be earning points, though, and at up to 17.5 points per dollar — depending on your Bonvoy status — that's certainly worth taking into consideration.

While my impressions are based on a two-hour pre-opening tour, I'm now even more eager to book a stay at this latest addition to the St. Regis brand. Hong Kong hotels are often significantly more expensive than many of their Southeast Asian counterparts — even top properties in Singapore — and this hotel is no exception. Still, if cost is no object or you're willing to burn a lot of points, you could surely do worse than the St. Regis.

Given how beautiful the property is, in fact, I could even see getting carried away. For example, on a short visit to Hong Kong, you could easily take a chauffeured ride from the airport (HKG) directly to the St. Regis, never leave the hotel and spend your trip living in pure luxury. But that would be a shame. There's just so much to see (and eat!) throughout the city. So, as tempting as it may be to never leave, I'd save the in-house dinners for locals with exceptionally deep pockets, and push yourself to go out.