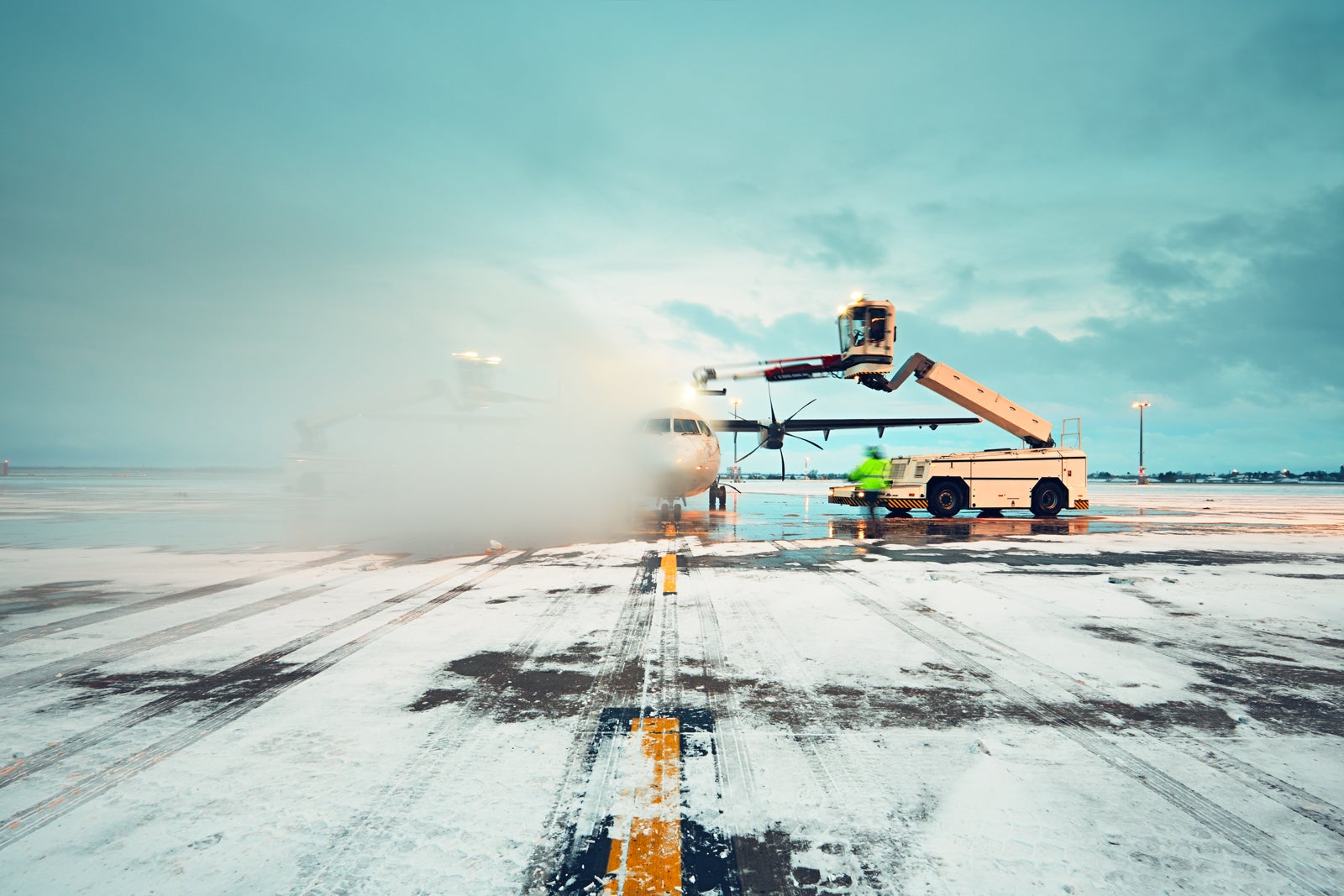 Parts of the US will be colder than Antarctica this week. And though the dangerously cold temperatures might not have any impact on aircraft, it can be extremely challenging for workers on the ground.

This week, temperatures are expected to hit record-breaking lows with subzero wind chills as a band of cold air caused by a massive polar vortex sweeps across much of the country. And forecasters predict the frigid weather could extend well into February.

Already, more than 4,000 flights have been canceled as Winter Storm Jayden churns across the Midwest and the East Coast. Wisconsin, Michigan and Alabama have declared states of emergency and, according to AccuWeather, temperatures in Chicago could drop to negative 25 degrees Fahrenheit for the first time since the mid-1980s.

Even in places with no snow or ice in sight, the extreme cold can be disastrous to airport operations. Baggage handlers, for example, must lug suitcases that — in this weather —may feel an awful lot like heavy blocks of ice. In parts of the Midwest, where frostbite could occur after just five minutes, that becomes a dangerous and difficult task.

We spoke with several experts with experience in airport operations to find out how they survive the Arctic conditions — and how cold weather can impact the important work they do on the tarmac.

“Everything slows down below 35 degrees,” Joe Palma, who has over 30 years combined experience in the aviation industry, told The Points Guy. “The whole airport shifts into a different mode.”

Palma started working ramp service for United Airlines at 17, and at UPS as an aircraft handler around the same time. He also worked in airport operations at Atlantic City International (ACY).

As the temperatures drop, daily operations increase in complexity. Water lines must be emptied and heated overnight, additives must be mixed into fluids to lower their freezing point, runways are de-iced and equipment has to be heated or left running even when not in use. All of this requires extra time and manpower.

“You can’t just put a heat cart on [the aircraft] overnight and go home,” Tom Hubbard, the director of field training and education for Airport Terminal Services (ATS) told TPG. “We have what we call ‘heat cart watch,’ where employees go from airplane to airplane on a regular basis, checking to make sure the hose hasn’t become disconnected, it’s still running and it has plenty of fuel.”

Some airports, such as Manchester-Boston Regional (MHT) and Chicago O’Hare (ORD), experience cold temperatures regularly throughout the winter and have procedures to reduce operational delays. But others — such as Atlanta, where subfreezing temperatures are uncommon — may be much more severely affected.

Another concern that can affect flight departure times is the safety of the employees who spend 8 to 10 hours on the tarmac.

“One of the biggest factors is really the people, and how long they can stay outside under certain conditions before you have to bring them inside and warm them up,” an airport employee who managed operations for United Airlines, who requested to remain anonymous, told TPG.

The duration of time an employee can stay outside depends on specific company policies and weather conditions. But regardless, having people switch out for breaks can hinder the process of getting the next flight out on time.

And for Hubbard, “safety trumps everything.”

“We provide hot chocolate for our folks, we bought thousands of hand warmer packs and sent them out to our stations and we make sure they have the proper clothing for the environment,” Hubbard said. “And during extreme conditions, we like to add extra staffing so we can rotate staff in and out on a regular basis.”

Hand warmers and hot cocoa are great, but proper layering and venting is a critical factor when maximizing the amount of time a worker can spend outside.

“The most important part of working outside in the winter is being dry,” said Palma. “If your extremities are all dry, then you’re going to be able to keep going. And you have to be hydrated enough.”

In order to keep his feet dry, for example, Palma put plastic bags in his shoes, between two layers of socks, when working outside in frigid weather.

According to Hubbard, ATS provides employees with a uniform allowance that is adjusted based on location and climate, to ensure that employees have the clothing they need to stay warm (and, in a polar vortex, safe).

But when employees are trying to load bags on icy tarmac while layered-up like the Michelin Man, they may not be able to move as quickly as they can on a sunny 70-degree day. And that alone can lead to delays.

An anonymous airframe and powerplant (A&P) mechanic who has been working for a major airline for nearly 20 years told TPG that it's not uncommon for flights to be cancelled simply because it's too cold to have employees complete necessary repairs.

“If [there's] a mechanical delay in cold weather, it’s usually because they are at an airport where they don’t have a spot to bring the airplane in from the cold to work on it,” he said. “In Chicago, you’re not going to go out and change a tire in negative 50-degree weather.”

When a climate-controlled hangar is available, mechanics will be able to complete the repairs, which may only result in a standard flight delay.

Like Hubbard said, in freezing temperatures, it simply takes more time, effort and planning to get flights out on time.

But when it comes to working outside during inclement weather, things can always get worse.

“In my opinion, I’d take subfreezing temperatures over 100 degrees,” said the former United employee. “It’s harder to cool down. You can only take so many clothes off. But you can always put more on. And in the heat you dehydrate quicker.”

Related stories
Legislation that could gut credit card rewards set to move through Congress
Would you stay at 1 of these 8 haunted hotels this Halloween?
Southwest winter flash sale: Get one-way flights for as low as $29
You can currently buy points and miles with up to a 100% bonus — but should you?
Featured image by (Photo via Shutterstock)