Articles
Gene Sloan has written about cruising for more than 25 years and for many years oversaw USA Today’s award-winning cruise site. He’s sailed on more than 150 ships.
Follow
May 12, 2019
•
7 min read 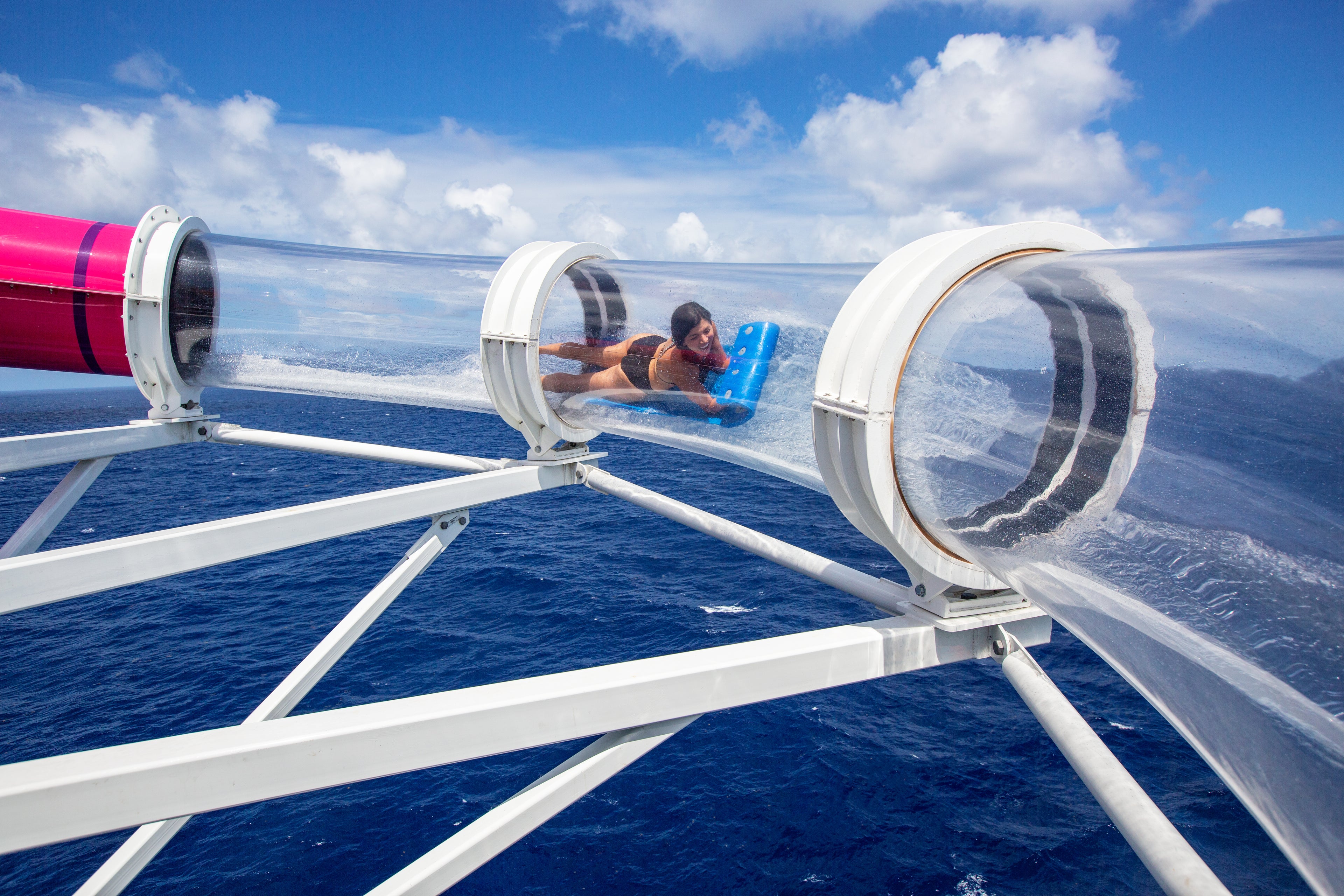 The Cruise Line That Never Did Waterslides Just Unveiled the Longest One Ever at Sea
This post contains references to products from one or more of our advertisers. We may receive compensation when you click on links to those products. Terms apply to the offers listed on this page. For an explanation of our Advertising Policy, visit this page.

The world’s biggest cruise line, Royal Caribbean, was a notable latecomer when it comes to the trend of cruise lines adding giant waterslides atop their ships. As recently as early 2016, it didn’t have a single one on any of its vessels, even as rivals Carnival Cruise Line, Norwegian Cruise Line and MSC Cruises were touting waterslides galore across their fleets.

But over the past three years, the Miami-based company has been making up for lost time. Since adding its first waterslides to the Galveston, Texas-based Liberty of the Seas in February 2016, Royal Caribbean has rapidly rolled out 17 of the most spectacular waterslides at sea across seven of its vessels, including — just a few weeks ago — the longest one ever built on a cruise ship.

Last weekend, I got a peek at this new record-setting attraction, which is on the line’s just-revamped Navigator of the Seas. It’s called The Blaster and, as I admitted in a sneak peek of the vessel’s $115 million makeover, it is, indeed, a blast. But not for the reason you might think.

Despite its unusually long length (it stretches more than 800 feet) The Blaster isn’t a scream-inducing thrill ride. It didn’t strike fear into me like the new Daredevil’s Peak waterslide at Royal Caribbean’s Perfect Day at CocoCay, which plunges from a height of 135 feet and is the biggest waterslide drop in North America. (I’m still getting over that one, which I tried for the first time on this very same trip.)

What The Blaster does do, however, is give you an opportunity for quality fun time with one of your kids, your spouse, a friend or, heck, maybe even a stranger. That's because The Blaster is a two-person tube ride, and it was specifically designed to be a family attraction that gets you and your loved ones together. Very, very close together.

“It’s meant to be fun for everybody,” Royal Caribbean’s vice president for product development, Laura Hodges Bethge, told me during an interview about the ship. The allure, she said, is that, “You get to do it together.”

The Blaster isn’t just a waterslide but what's known as an aqua coaster. It features water jets that propel you up and down as you careen around the back of the ship and even beyond its sides, out over open water.

Hodges Bethge, who was responsible for the overhaul of Navigator, said she sent three teams of her employees with their kids to waterparks around the country to see what sort of waterslides they thought were the most fun for families. All three came back saying it was the multiperson aqua coasters.

“When the teams came back, they said doing a slide by yourself is really fun, but doing it with somebody else just makes the experience much better,” Hodges Bethge said. “We said, [if] that’s the best experience, then we have to create it.”

It wasn’t easy. Hodges Bethge called it a “very big challenge” to build an aqua coaster on the back of Navigator. It’s something almost no other line has tried before. Only Disney Cruise Line has done something similar (but smaller) on two of its ships.

Personally, I was amazed at the intricacy of the design of the ride, which weaves its way like a crafty serpent around and above the ship’s existing basketball court, rock climbing wall and FlowRider surf simulator. It also twirls around a second new waterslide in the same back-of-the-ship area. Called Riptide, this second attraction also is unusual in that it’s the first headfirst mat racer waterslide at sea. That is to say, it’s basically an elaborate device that washes your face. I admit that I had a grand time watching people get blasted with water as they splashed down at the end.

“We wanted to make sure we had a little bit more thrill for those who wanted it,” Hodges Bethge said of Riptide’s headfirst format.

Why so much effort to "go big" with waterslides atop Navigator? It turns out that, after years of shunning waterslides, Royal Caribbean has found they are guest-satisfaction nirvana.

“When we look at one of the highest guest satisfiers on our ships, it’s our waterslides,” Hodges Bethge said. “Families and kids of all ages love them.”